Dam-Funk Drives Us Around L.A., Discusses ‘Invite the Light’ Album and 7 Days of Funk 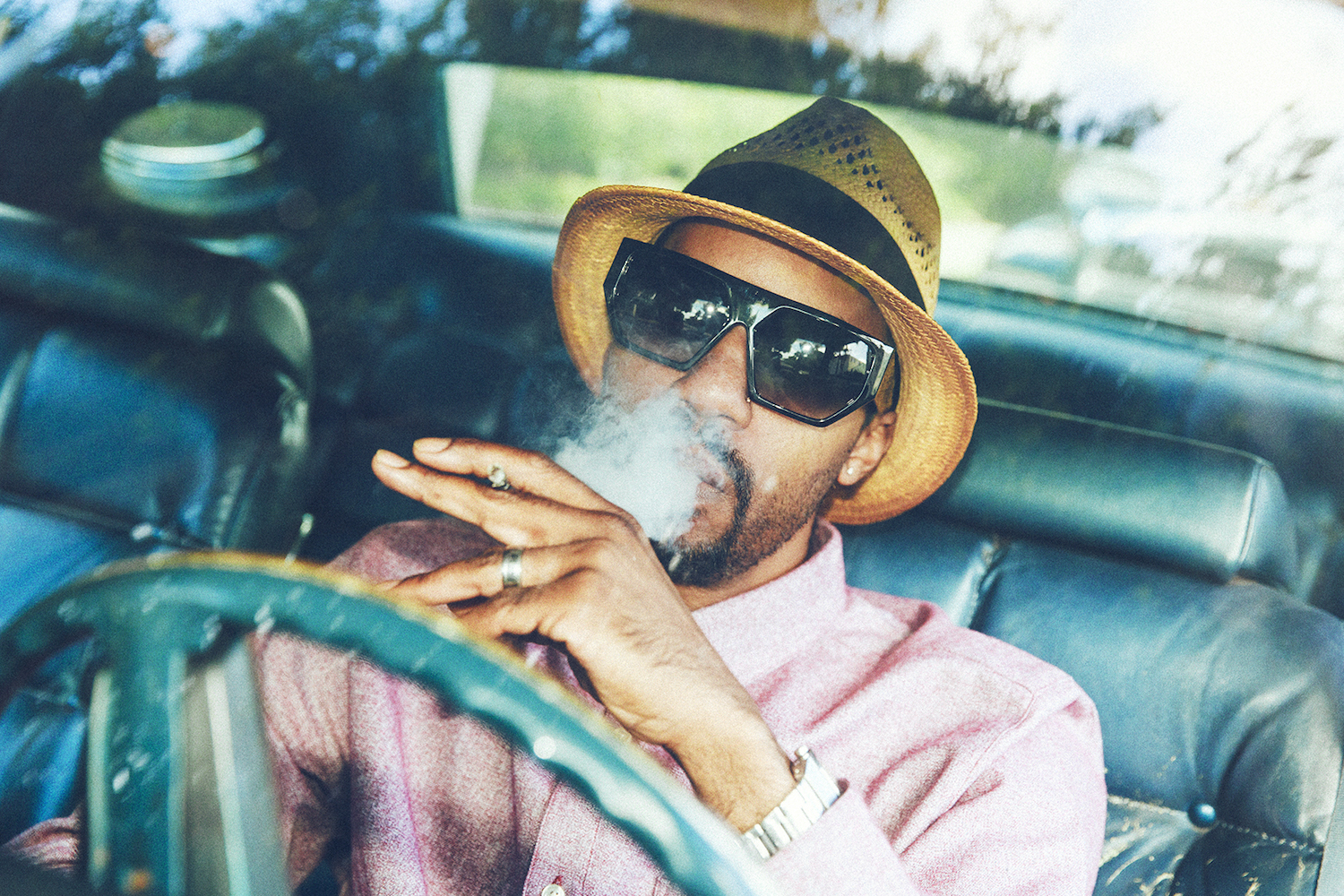 The following feature is taken from our new iPad app, which can be downloaded via iTunes. If you’d like to support us directly, annual subscriptions can be purchased through The Merch Table at a special rate this weekend only. We’ll be sharing more stories from our winter issue over the next couple weeks. In the meantime, thanks for your support!

If you ever get the chance, you should watch Dam-Funk drive. This is, of course, an unlikely proposition. But should you ever see a glimmering mid-’70s Pontiac Grand Prix cruising down La Brea Avenue in southwest Los Angeles, stare through the tinted windows. There’s an offhand chance that the sea-green G-ride may contain Damon Riddick, a musical vessel so preternaturally funky he made it half of his stage name.

Until the Stones Throw–signed messiah of modern funk emerged, the style was marked for death—a filthy but beautiful skeleton abandoned to sample-chopping hip-hop producers. With one full-length (2009’s Toeachizown) and a clutch of EPs and collaborations, the Pasadena native defibrillated an entire genre. He’s also been known to unleash extemporaneous, mid-concert tangents about how you should pick up the phone and call your mom and grandma. If anyone else did it, you’d roll your eyes and head to the exits. When Dam-Funk tells you, you re-calibrate your speed dial. The man even made the keytar cool again.

These achievements altered the space-time continuum of underground music. A Hype Machine hall of fame has been influenced by cuts like “Hood Pass Intact” and “10 West,” songs suffused with azure and rose-gold synth chords and obsidian drums polished, hover-converted, and re-introduced into circulation. The short list of the impacted includes close friends and collaborators Ariel Pink and Nite Jewel, Animal Collective, Toro y Moi, Hudson Mohawke, and Tyler, the Creator. André 3000 has reportedly even been listened to Dam-Funk during set breaks while filming the Jimi Hendrix biopic. The coup de grâce may be his latest record, though: 7 Days of Funk, a collaboration with Snoop Dogg, who’s adopted the name Snoopzilla as a nod to Bootsy Collins’ own alias. “It’s about making timeless music,” explains Dam-Funk, “something that produces good feelings but balances reality. Things will never be perfect, and funk reflects that. It’s a combination of a smile and a tear.” At the moment, Dam is wearing a straw hat with a black sash—covering clavicle-length Superfly hair—and sporting a burgundy button-up shirt. Small studs in his nostril and left ear glint in the anemic sun as he whips down the wide street, speeding past oil derricks bobbing for black gold in the scraggly dirt mountains above La Brea.

In search of a refreshing beverage, we’ve left his two-story townhouse in Ladera Heights, a diverse middle-class neighborhood near LAX. Dam moved here two years ago, partially to accommodate his constant traveling schedule. This month alone, there are trips to Singapore, Bangkok, Amsterdam, and sporadic dates across the US. His home studio is small but cozily furnished: vintage keyboards, turntable, a microphone, hundreds of records, hats neatly hung, and posters of his boyhood heroes, Kiss and Prince.

“Funk music can make you happy but, in an instant, leave you with borderline sadness,” Dam continues, effortlessly steering the catamaran-sized vehicle as though it were a Zipcar. He neatly avoids potholes, slurs past corners with tightrope control. It’s like watching a Zen monk meditate on the precipice of Wenshu Mountain. “I’ve been betrayed and celebrated. I’ve been aligned with great accomplishments and failures. That’s the funk life.”

He’s been recording music since the late ’80s, when he doubled as a jazz-band drummer at Pasadena’s Blair High. After graduation, he linked up with the funk legend Leon Sylvers III for session work on projects that included an aborted Milli Vanilla comeback. There were day jobs for Office Depot and driving a van full of blood for the American Red Cross. At night, he played keys on gangsta-rap records from MC Eiht and Westside Connection. We ask if he ever considered quitting or altering his sound to fit contemporary tastes.

“Never,” he answers without hesitation. “I always stayed true. It’s too important.”

We’re now at the Cork, a blue-lit neighborhood bar in West Adams. Dam’s sipping a Godfather (equal parts Scotch and amaretto) and eating a turkey soft taco (extra cheese, no lettuce). “If I changed my style, I could never look at my old neighbors in Pasadena again. It would’ve made me just like everybody else.”

This singular vision and mutual love of Steve Arrington and Slave initially drew Stones Throw honcho and DJ Peanut Butter Wolf to Dam’s work in 2008. His refined chops and refusal to compromise also explains why he’s inspired so many of his peers.

“His musical approach is ‘pure’ in that he’s consistently working in an emotional realm as opposed to an intellectual one,” says Nite Jewel, with whom he’s collaborated as Nite Funk. “That’s not to say that there isn’t great thought going into his musical legacy; he’s very calculated about what kind of synth sounds to use, what kind of words to sing, etc. But when he gets down to playing the music, all that happens is pure expression.”

Like many great artists, he’s retained his initial wonder and passion for music. There is no refuge for jaded sentiment. He speaks about watching beach sunsets for inspiration and listening to records on his headphones in his room, pretending to be that same music-hungry child from Pasadena. He takes this seriously because there is no other choice. If it wasn’t for him, funk would be reserved for county fairs and old-school nights. Dam and Snoop Dogg met when the former rocked a gallery party for Joe Cool, who’s created album art for several Snoop records. After Snoop overheard Dam play, he returned for a jam session and invited Dam to play keys and shoulder-synth at a 2011 SXSW performance. They forged a mutual admiration; then out of the blue, Snoop sent Dam a cryptic Soundcloud message: “I need some of that heat.”

“It made perfect sense for them to do it,” says Peanut Butter Wolf, who’s releasing the record. “They’re approximately the same age, and they both rep Los Angeles funk the hardest.”

While retelling the recording story behind Snoop’s raps on lead single “Faden Away” (weed is obviously involved), Dam is interrupted by a fan’s Tweet. He shows it to us.

“This thing right here is what I’m trying to tell you,” Dam says. “This just happened 25 seconds ago. I can’t do anything to fuck it up.” The Tweet reads: “I’m thankful for @damfunk for keeping funk alive.”

If an electrocardiogram could illustrate the health of a genre jump-started by James Brown, funk would approach its peak axis over the months ahead. Next spring marks the release of Dam’s sophomore LP, Invite the Light. “I’m not advocating for ultra-positivity because we know there’s a yin and yang,” he explains. “The album is really about being open to inviting the light into your life and letting things happen.” By contrast, 7 Days of Funk hinges upon Snoop’s rough sketches of a turbulent relationship.

“You don’t have to be on TV or radio to be a success,” Dam adds, paying the bill and standing up to stretch. “Stay true. The money might not be there, but damn, you can sleep well at night.”

As we dodge traffic to get back to the car, he turns and adds for emphasis, “I’m not competing with other artists or anyone in LA. I’m in my own lane. I want to be like Buddy Guy, where you don’t need a new album for people to show up whenever you decide to have shows.”

As Dam opens his car door, a weathered older man stops his sidewalk shuffle and stares at the Grand Prix. “Excuse me, sir,” he gawks. “I’m sorry to bother you, but that is the most beeyootiful Grand Prix I’ve seen in a long time.”

Dam thanks him, slightly bowing his head in “game recognize game” respect. Then the old man keeps moving, turning one last time to mumble to himself, “Oh, good lord, that’s beeyootiful.”

And then, hood pass permanently intact, Dam gets in his car and smoothly glides back home. //