SCREENING ROOM: The Making of … El-P’s “The Full Retard” Video 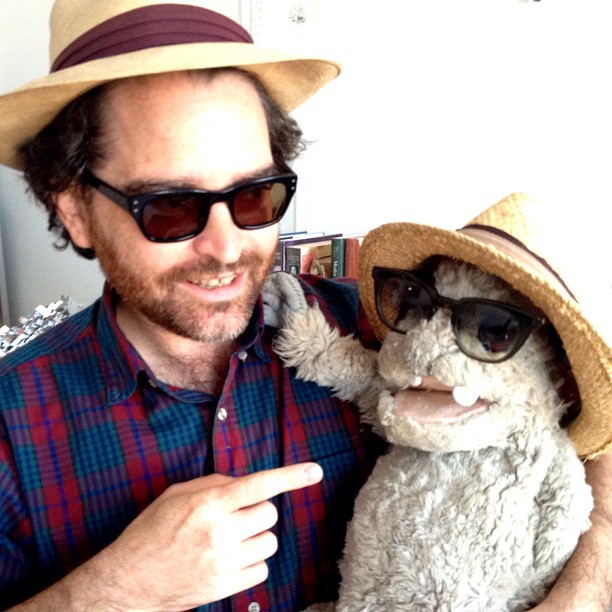 If you spent any time looking at music sites last week, then you probably stumbled upon the hedonistic, somewhat hellish Jim Hensonverse of “The Full Retard,” an El-P video starring a line-plowing, gun-popping, womanizing puppet named Mr. Killums. Since we’re always curious about the methods behind such madness, we asked director Timothy Saccenti to share some stories from the set, along with what it’s been like working with the MC/producer–an artist with an actual fully developed vision–on his last two LPs, including the recently released Cancer 4 Cure…

When and where did you first meet El-P? Were you already a fan of his solo records or work with Company Flow?
El and I were connected via Amaechi Uzoigwe, a creative manager/maven of the music world in New York City in the mid 2000’s. I had been working with the artist Beans, whom Amaechi managed. This connected me to Def Jux and when I met El, we got along like a house on fire creatively. I was coming from a more electronic music world to the situation rather than hip hop, so it was an interesting crossroads.

What was your first impression of him, both creatively and personally?
Straight talker, aware, sardonic, intelligent…on all fronts. A true city kid.

Was the I’ll Sleep When You’re Dead campaign your first collaboration with him? If so, were you involved in much more than just the photography around it, much like you were on the new record?
El had great ideas about what he wanted for the ISWYD artwork. We collaborated on a few photo sessions around themes of the album–1984, prison ships, surveillance. This was when [President Bush] was in office, so the tension was high. I did album art and press photos for the album, but I had just started created video work so that wasn’t part of the process yet. What’s the story with the bird element on the cover of the last two records?
It is a tattoo that he had from a drawing given to him by [artist Alexander] Calder when he was a child. El is a child of NYC, and has many interesting stories revolving around it. The theme in ISWYD was the phoenix on fire, transforming; for Cancer 4 Cure, he wanted the bird crashed to earth, on the dark cement of the street. An evolution or a devolution, I’m not sure.

What were some of the similarities and differences in how the two of you worked together on the last record and what you did this time around?
On ISWYD, we got to know one another, respectfully. After that process of creation you can start to trust one another. This time everything developed faster, better, stronger. You create a shorthand, like in any collaborative piece. El has VERY clear ideas about what he wants, and my job is to realize them, to twist them into an aesthetic I feel expresses the concept honestly.

How would you describe the concept behind Cancer 4 Cure?
With Cancer 4 Cure, I think El hit a creative high of mixing his sense of drama and lyrical themes–paranoia, control, self-destruction–with a perfect balance of humor. His lyrics are very visual, so they lend themselves to a depth of narrative in film form. What I was trying to do was match themes of the album with short vignettes in the trailers–more like flashes of memory or short poetic bursts than full stories. Each idea was written in a maximum of one sentence. They related more to the world of EL-P than any specific narrative itself. We spent a large amount of energy on them trying to keep them as minimal as possible. In the end, El created new musical scores for them, thus enhancing their stand-alone identity.

How about the “Full Retard” video? What was the concept behind that?
For “The Full Retard,” we wanted to make the funniest video we could possibly imagine, ignoring issues of slickness and putting the humor front and center. It’s a knowing attack on slickness, but we wanted the technique, editing, etc. to represent his production value in its bombast.

When did you first start working on it?
We started discussing ideas well before the album was done. That’s a great thing about having a relationship with the artist established already–you can gestate ideas longer. El, who has a plethora of amazing ideas, wanted a psychedelic, cross-country, buddy movie-type video.

And how did that evolve into one involving a puppet?
There was the idea of it being a homage to Toonces the driving cat, a Saturday Night Live skit, which devolved into it being a squirrel. El added the eye patch. [Laughs] I had also been working with some amazing mask/puppet people on a campaign for Oxfam, so it tied into what I was already working on. So that was the start of the production and it went downhill from there.

Downhill in a good way right?
[Laughs] Yes, the good kind of downhill.

How does the video relate to the song itself?
I’m not sure how it relates to the song except in spirit.

Did you guys worry about the video falling into a ‘puppets gone bad’ cliche?
Well you can’t overly worry about something becoming cliche or else you’d never do anything at all. All you can do is sail the ship into a direction you think is something you’d want to see yourself, and make it as personal and interesting as possible.

Who operated the puppet? And is there anything El or you wanted to simulate with the puppet that you decided was ‘too far’? I mean, there’s already murder, drug use, etc. in it, so probably not.
The puppet had a puppeteer for parts of it. For most of the more risque scenes, either I operated it or the girl herself did. It seemed a much better call to have the girls themselves go crazy with Mr. Killums than have me interact with them; it lets out the inhibitions more when you are controlling it yourself.

To answer your other question, using an anthropomorphic animal–in this case a puppet–as your protagonist allows you to not be bound to the moral codes that you would if it were a human being. So nothing was too off limits, really. It was designed this way–as a safe place for the viewer to laugh at things they might find reprehensible if it were a human doing it.

Were you trying to show how desensitized we are as people?
That was never discussed, but it did start out a bit tamer than it ended up. Through the process it became apparent that the more we pushed it, the more realistic it seemed somehow. There is a pure concept to it–that society itself is suffering from mental illness, and this is the expression and result of it. When working with El-P, the ideas come first–the point of view and message–and then we work out how to express that. In all his works, not only the ones I’m involved in. Humor, in this case, is the medium but not the message.

Right. So it started with the idea of society being sick, then evolved into this road trip manifestation of it?
Yes, you could say that. It’s a satire piece…Humor is often the best way to get a point across directly. It bypasses reason. For the “Full Retard” video, the main point, from his point of view, was to make it “the most fun video people have seen in a while” and we took that humor very seriously. When was everything filmed?
On location in New York City in the early summer of 2012, so not too long ago. We wanted to keep the aesthetic somewhat raw and [documentary] style, so it’s all places we know well, with people we are friends with. All of El-P’s projects are a collaboration with him in every way. There’s no way you could bring this script to a random artist and have it have the scope and humor of this video.

How do you mean? Because he inhabits the character so well, and it’s his idea, first and foremost?
Yes. He’s very serious about being very funny in this instance.

So in other words, he’s serious about whatever he does, whether it’s humor or some dystopian nightmare?
Yes, yes, yes.

I think people have overlooked his sense of humor in the past. All they’ve seen is this apocalypse now kind of narrative…
It’s really important to his work. You can’t have that bleakness without humor. It’s like black comedy–you go to hang yourself with a noose, and the moment you are about to hang, your pants fall down.

Ha, right. So do you have any other anecdotes from the set of making this video?
Let’s just say that wasn’t colored water in those shot glasses. Also, after dancing naked with the puppet, one of the girls got a little too into it and began to fear she’d start calling in the middle of the night after too many drinks begging me to bring Mr. Killums over for some fun. [Laughs] “It’s kind of scary how into his I am,” I believe she said.

Did you guys enjoy him more than you thought you would as well?
He’s still at my house, staring at me. HE JUST WONT LEAVE. We love him now. He’s pretty much a member of El’s band, so don’t be surprised if you start seeing A LOT more of him.

Did you work on anything else around this record that we haven’t seen yet?
That’s classified. And yes.