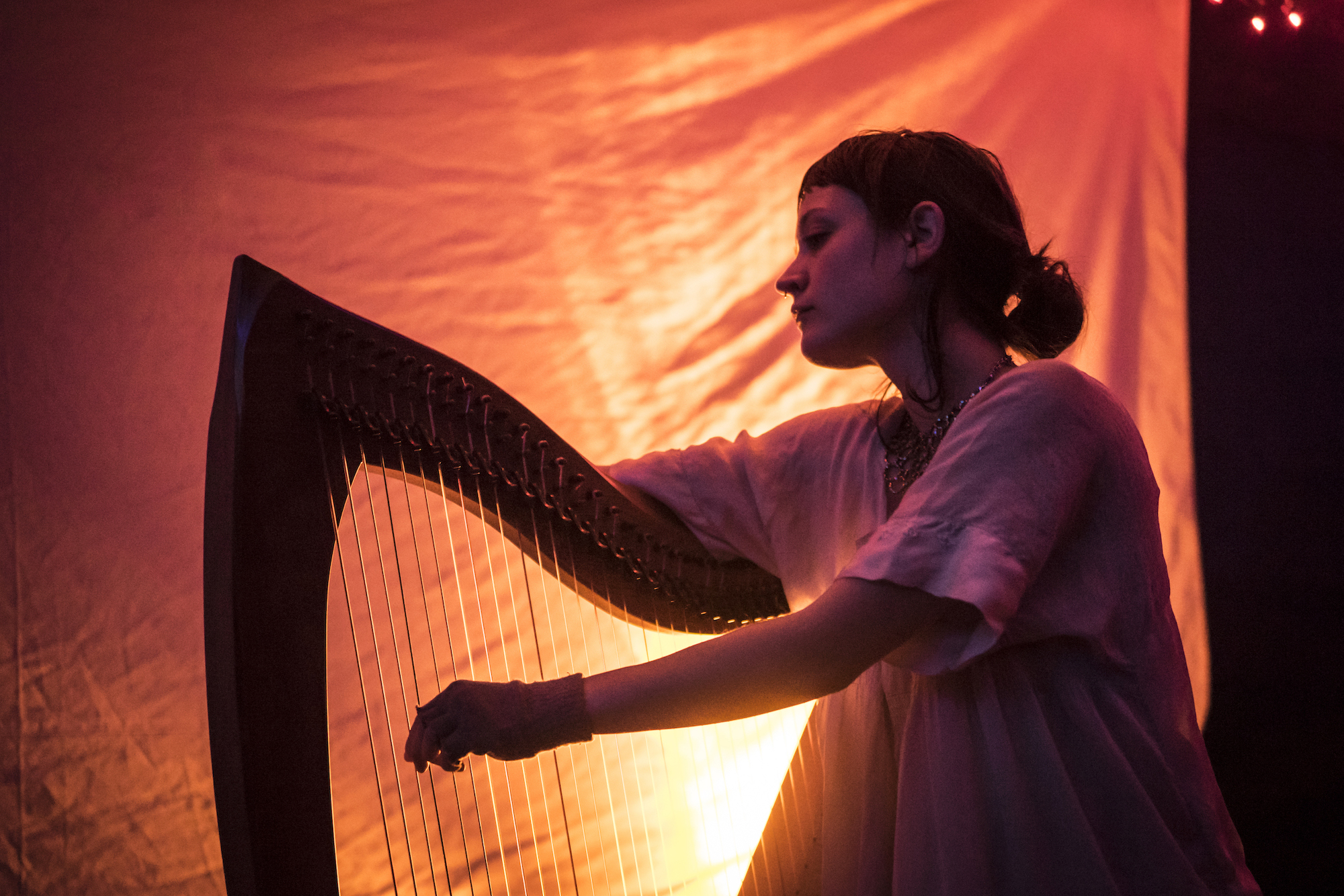 While there’s little more than a harp at the heart of Sage Fisher’s Dolphin Midwives songs, it’s easy to fall under her spell of processed and pure sound, as vocal and string melodies are mangled and massaged before our very eyes.

“The first time that I saw Dolphin Midwives,” says Beacon Sound founder Andrew Neerman, “Sage was a spectral presence, dressed all in white, as though prepared for some sort of purification ritual. The way that she conjured up a web of sound that managed to be both jarring and trance-inducing—with just a harp, her voice, and a bunch of pedals—was memorable. She has since proven herself to be one of the hardest-working musicians in Portland.”

Fisher’s strongest artistic statement yet hit shops last week in the form of her Liminal Garden LP, a co-release between Beacon Sound and Sounds et al. In the following exclusive, Fisher shares the record in full along with a complete track-by-track commentary that puts its overarching themes in perspective…. 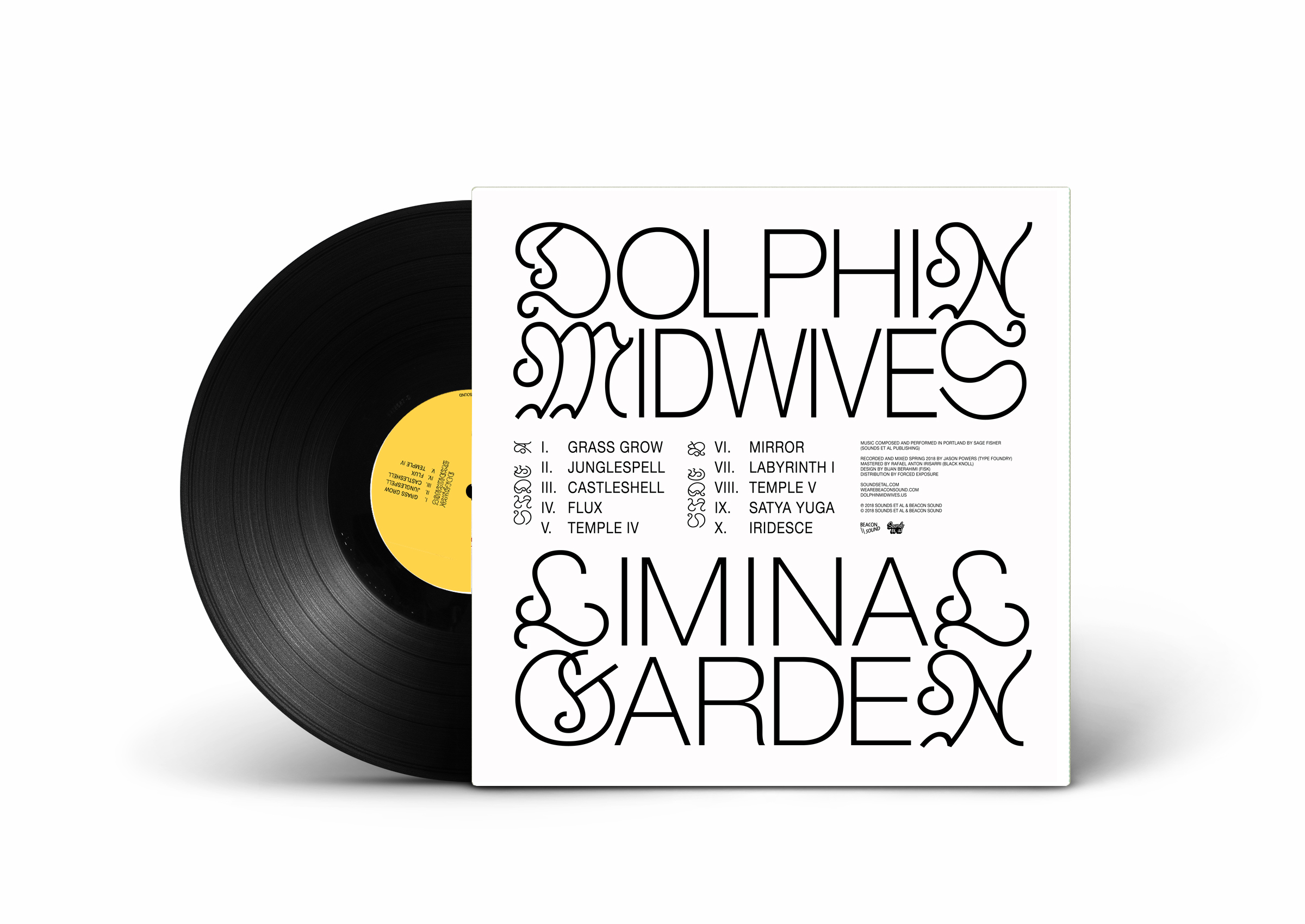 Liminal Garden is about change—transforming myself and the world, disappearing, shifting perspectives, the relationship between nature and modern technology, the struggle and constant mutation required to be femme living in a patriarchy. This album changed as I made it, and it changed me. During the making of this record, my life underwent a dramatic series of upheavals. The big eclipse happened, I moved, I went through a break up, I banished a shadowy character from my past, I changed jobs, #metoo happened, and I was suddenly deeply aware I was sharing this huge unearthed trauma with the women of the world.

And while this was happening, I was developing this series of rhythmic jazz and gamelan-inspired harp songs, songs that were about the ecstasy of the natural world and diversity and the vitality of plant life. Fast and fluttery and interlocking rhythms and bold was the plan. But as everything shook up in my world, the pieces wanted to become lighter, airier, spacier; I became vulnerable and the work became full of holes, spaces, disappearances. It really reflects how I felt during the process, like I was disappearing and reappearing every other millisecond, somehow living out another life in another universe. I was doing my best to heal from trauma while remaining present, still allowing myself sweetness and empathy and beauty, while experiencing unyielding heart pain, and attempting to share some of this lightness, hope and vulnerability with the world.

The result is Liminal Garden.

I. Grass Grow
This is a piece about stopping to notice little things, gentle things, delicate things, about the persistence self-healing of the natural world and of grass and of bodies, about taking time and space away from the juggling of faces and media and hustle of the world for reflection and opening to the infinite, about the depth of the world and the infinite depth inherent the smallest natural process.

III. Castleshell
This piece started as a question: How can I make a song about this type of shell my grandmother and I used to find on the beaches of Goleta when I was a kid? She called them castle shells. They were spiral cone shells—about 2-to-4 inches in diameter at the base—and always reminded me of a spiral staircase, a palace, a place more than an object, the place where my grandmother resides. The spiral felt like the sound I wanted to make, one that stretched backward and forward in time, and connected me to my grandmother by this melodic, spiraling, fractaling thread.

IV. Flux
This piece integrates the minimalist, fluttering, transformational, liminal state, stuttering and opening from hushed air sounds and ventures though very medium/centrist tonal territory and opens into a fluxing chaos magic headspace. This was really just a sound and mood experiment while I was working with these fluttering techniques and in a place of rapid growth and change. It’s a cocoon and emergence from a cocoon; a state of continual flux, it is disappearing and reappearing and existing in between the two. 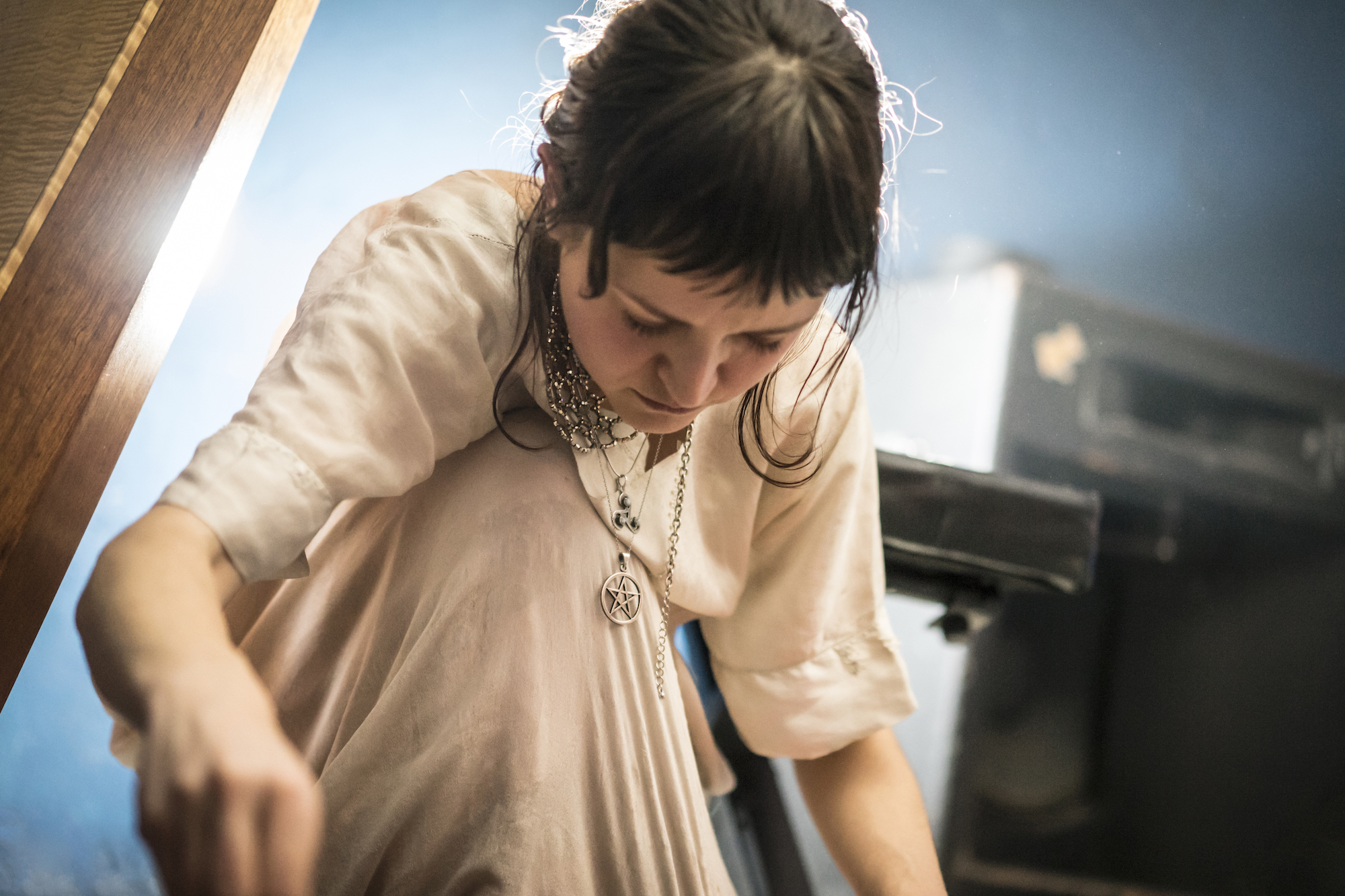 VI. Mirror
Absolutely the most personal piece I’ve ever written. One look and you turn me, one look, when you look at me, I lose, I lose my footing. This was written in the wake of an encounter with a person who once held power over me. This is about being seen and wanting to be seen. This is a song about being devoured by a gaze. This is a song about looking in the mirror and seeing someone you weren’t expecting to see looking back. This is about the need to integrate all our selves and about seeing ourselves in each other. This is about being present in the moment as a femme performer and realizing all the was that you’re being judged, observed and appreciated, and that every gaze is projecting its own perspective, and the disorientation that can occur when you attempt to see yourself through another’s eyes. This is about not being able to be everything to everyone. This is an empath’s and a narcissist’s and artist’s plight.

VII. Labyrinth I
I wanted to create a piece that had a topsy turvy angular getting lost in a maze feel, like moving through a maze that is always shifting, with too many right angles and dead ends and stairways. Like a meta architecture, I wanted the tone and the melody and the structure to be holographic and metaphysical to represent the feeling of being trapped in a system with an elusive or impossible escape. I took a simple melody that felt ungrounded/hypnotic tonally and processed it though a sort of structural game-design type sound, the disappearing/reappearing fluttery feeling gives it an meta-angular, extra-dimensional feel, and possibly offers a way out if you read between the lines.

IX. Satya Yuga
Satya Yuga is a reference to the golden era, a positive and mutually beneficial, ideal age that Hinduism describes coming after the Kali Yuga, an era of struggle and discord. I’m really inspired by this system of thought, that humanity cycles through both positive and challenging times, not thinking of our social growth as linear toward some heaven, or some toxic post-apocalyptic hell as true optimists or pessimists believe. This piece is imagined as a celebration in a time of ecstasy and revelry on earth when humans and plants and animals are living together in symbiotic relationship.

X. Iridesce
A reimagining of “Grass Grow,” considering what grass would sound like if she could speak. 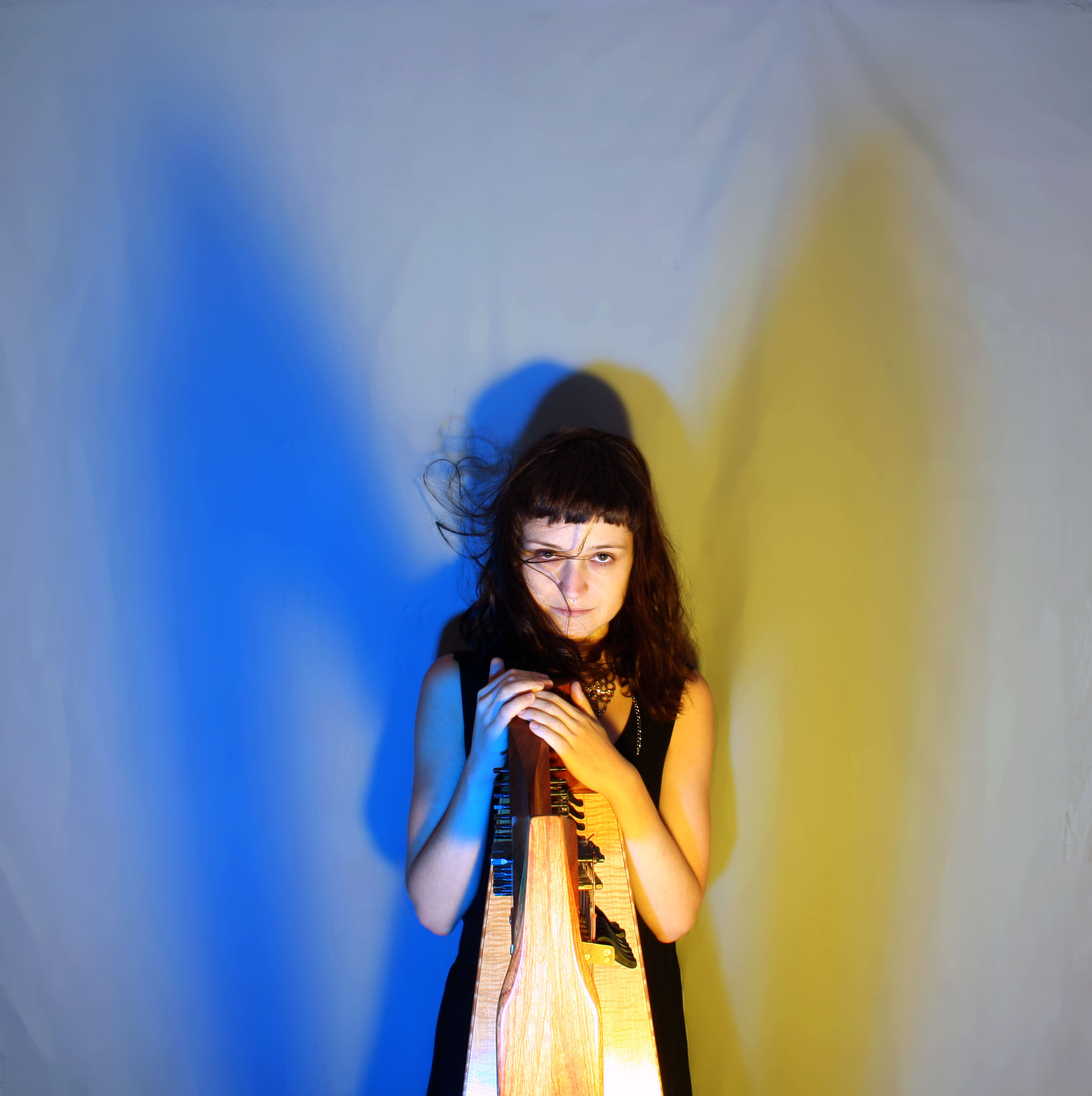