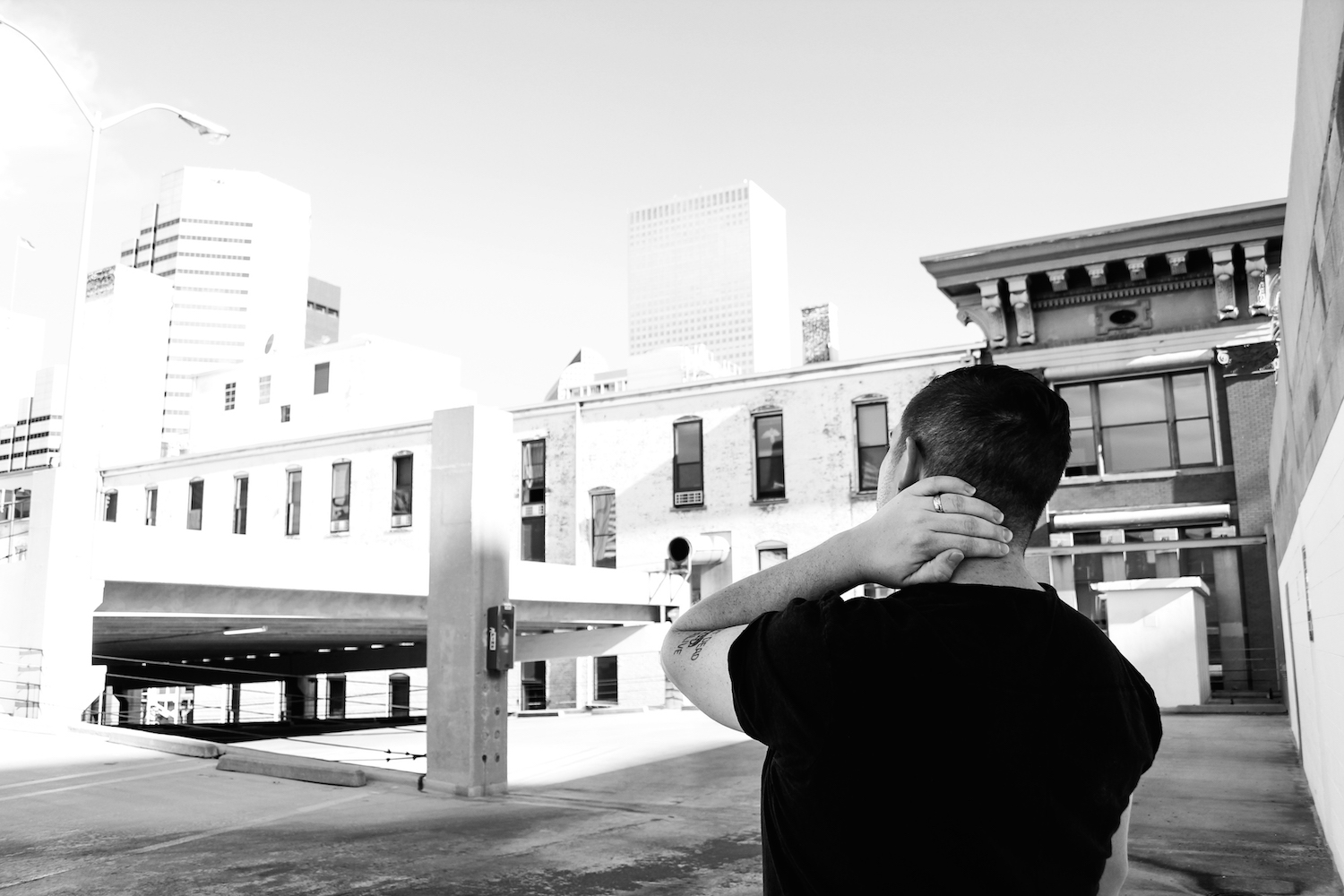 Philip K. Dick would dig it, in other words.

“What interests us the most in science fiction,” explains Croissant III, “or what we find makes the genre successful, is the ability to construct a new universe, culture, and environment. World-building is something we strive for individually in each of our creative practices. The ultimate goal of this collaboration is to use the music of Arcology as a framework to create a universe.”

Here’s how the duo made it all happen, track-by-track style…

“ROM”
Thug Entrancer: “ROM” represents the initialization of the record. I wanted to simulate the feeling of jacking into an unknown universe for the first time. It’s an attempt to introduce a burst of ideas and sounds that you will encounter throughout Arcology.
Milton Melvin Croissant III: In relation to the cover art, I imagine this being the sound of booting up the software connected to the VR stillsuit.

“GHOSTLESS M.S.”
TE: This track embodies the overall mood of the record for me. It has a sense of urgency to it that threads itself throughout the album. When writing this track I was imagining the inner workings of the ship that would eventually become the Arcology. I was modeling a lot of metallic textures and reverberation that would represent the underbelly while the rhythm & bass develop the fuel for the Arc’s exploration.

“ARRAKIS”
TE: An homage to the wasteland planet in Dune, “Arrakis” introduces the first environment you encounter within the record. I imagined a vast desert planet, dead for years and void of humanity. The sounds might exist here or how the Arc would interpret the landscape as musical data. A lot of these abstract ideas are represented in underlying synthesized textures.
MMCIII: The noise and grain on Arrakis create a very nebulous mood and environment. In our live collaborative sets, this track is when I introduce the smiley face desert planet found throughout the videos; we explore it in further detail.

“LOW-LIFE”
MMCIII: The video for “Low-Life” shows an emergence from one reality into another. We zoom out of this cracked VR to show the pilot isolated within their console surrounded by wreckage on Arrakis. It plays with the idea of what is imagined and what is reality and whether or not there is a complete disconnect between these realities.

“TERRAIN”
TE: “Terrain” introduces another type of exoplanet encounter. Contrasting with Arrakis’ desert planet, “Terrain” takes the exploration through a lush forested wetland. The three lead synth lines on the track represent the flow of water and alien lifeforms. When creating those sounds I kept imagining these roots digging into the ground, further and further. The overarching VR theme is still very prevalent and in the end the realization that this life you are visualizing may only exist virtually.

“RONIN”
MMCIII: The song, for me, is the album’s anthem. In the video you experience the scale of everything within Arcology. There are layers of realities presented. You see the ship in space but also see the people within the ship creating their own reality with these artistic tools. It feels like the universe reversely extracting into Ryan’s brain as you dive deeper and deeper into the song. There are a lot of easter eggs hidden within the video as well that bring our own personal realities into this imagined universe.

“ARCOLOGY”
TE: I was imagining the interpretation of data when I composed this song. I wanted to explore the fusion between data and humanity, a sort of singularity where data outputs emotion. It was an improvisation on a Serge Modular system paired with an Elektron Analog Four.
MMCIII: There’s something about the pacing that feels like a calm base of some sort of technological process. Like how a computer would assimilate into human form.

“EXO-MEMORY”
TE: “Exo-Memory” has a very nostalgic feel to me, almost like sci-fi montage music. It’s the soundtrack to uploading yourself into a databank for preservation or injecting RAM into your bloodstream akin to slamming a futuristic monster energy. “CURAGA”
MMCIII: The main motif sounds like the mechanical parts of the ship attempting to communicate or coming together to see through the journey in unison. In the video for “Curaga” you get to explore the design of the Arcology and the environment that it exists within.
TE: “Curaga” is the restoration phase of the record. Slowing down to heal and regenerate to prepare for what’s to come.

“TIGHT LEAN (PERISPRIT MIX)”
TE: “Tight Lean” was one of the first tracks I ever wrote as Thug Entrancer. I wanted to revisit it for Arcology because it felt like a perfect bridge between my older techniques and this more refined approach. Originally the idea was to fuse this Carpenter-esque horror theme into a footwork framework. The “Perispirit Mix” features a prominent acidic bassline that sits in between these two ideas. It’s intended to be jarring and frenetic at times, harping towards something imminent.

“VR-URGE”
MMCIII: It’s very blissful, like a beckoning for the promise of a fantasy.
TE: “VR-Urge” is the comedown from “Tight Lean.” Transporting you out of the chaos into ecstasy. “BRONZE”
TE: There’s an old SNES RPG called Shadowrun based on a sci-fi tabletop game. In the Nintendo version there is a club filled with deckers, hackers, low-lifes and mercenaries. “Bronze” is the imagination of Thug Entrancer performing in this fictional environment—an anthem to empowerment through technology to combat authority. I imagine this club within the Arcology, existing as a hologram of a distant memory.

“WAGE MAGE III”
TE: “Wage Mage” represents struggle to me, the nuances between participation and escapism. It was derived from the idea of martial music and how rhythm influences your behavior and decision-making in these tense situations. In a sci-fi context, a Wage Mage is someone who has extraordinary talents but is co-opted by a corporation. In relation to the record I think this is the moment when the VR system fights for control. Humanity grows more and more distant and your mind and body become co-opted by the system’s AI.

“XENO”
MMCIII: This song feels very disorienting, which lends to the idea of a confused reality. There’s a sense of a disembodied menacing presence that has been manipulating your interactions the entire time.
TE: “Xeno” is the outcome of the struggle after “Wage Mage”; it’s the void after the experience. I wanted to create this alluring vibe that made you want to revisit the trip, almost addictively. Its dark overtone was intentional. I was reflecting on this idea of empowerment through technology, who controls that technology, and how accessible freedom actually is.

Previous Vaadat Charigim Share Documentary of First U.S. Tour From SXSW to NYC
Next What Happened When No Age and Wolf Eyes Invaded Our Instagram At SXSW