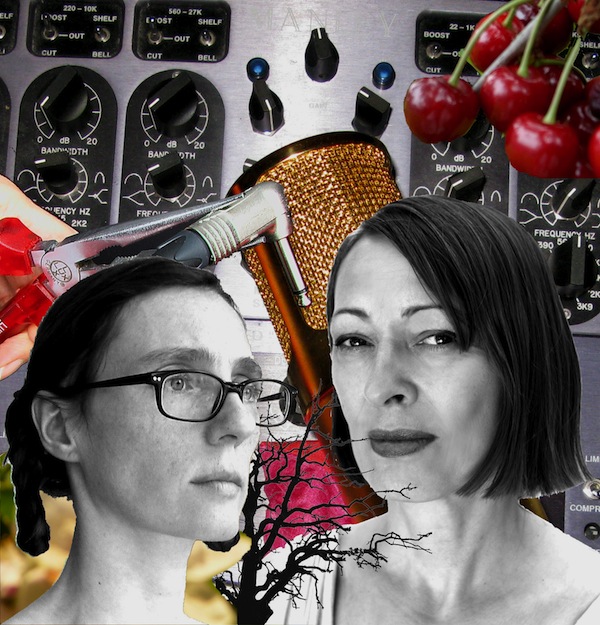 As we told you a little over a month ago, Greie Gut Fraktion is as good as it gets on the experimental techno front, a side project that isn’t indebted to 4/4 dance tracks so much as the outer fringes of pop music. Since two of the scene’s most respected producers/singers sculpted Baustelle, we’ve given each of them a proper post, beginning with Gudrun Gut‘s stream-assisted breakdown of the entire album.

Did we mention that it’s rooted in field recordings of construction sites? Well it is, and Antye “AGF” Greie will reveal some of its non-musical influences later today. “Cutting Trees”
Before starting to build something, you need to make some space. And when you wanna build a house, you might have to cut down some trees. Isn’t that horrible? To destroy a tree?! The drama: for everything new, you have to get rid of something else. It is a tragedy.

“Wir bauen eine neue Stadt”
I know this track from the ’80s. It’s from Palais Schaumburg. I always liked the song, and the subject suited our purpose and theme: Baustelle. Antye didn’t know the track at all, but loved the dancing in the video. The text is also fantastic. This is our version. It went really fast and was totally natural.

“Mischmaschine”
I saw a guy with a mischmaschine making cement. It was rotating, and the sound became a beat. We then took the idea a bit further and made it a ‘mix’ of one another’s ideas.

“Make It Work”
We developed this track together in Finland. Things have to be done. Make it work. Build it up, break it down, finish it. That’s what it’s about–take the chance and do it. It’s a positive approach, but knowing there will be obstacles and life isn’t easy. But take the chance and do something. I guess it is a key track for us. “Betongiessen”
Me watching a man pouring concrete. The guy looked pretty good in his rubber boots.

“Grossgrundbesitzer”
We used sounds from Beijing’s airport to make it big, ’cause that’s a very big airport. It’s just a simple, slow beat with some magic added. Antye also did this  fantastic vocal line in the middle of the night in her Finnish sauna where we did most of the vocal recordings. Love it. Haven’t we heard it all before…

“Baustein”
“He is a man like a stone.” Someone dropped that line, and I wondered what kind of man that would be. Antye added this “bau auf, bau auf/fÃ¼r eine bessere zukunft” (“build it up, build it up/for a better future”) line. I thought that was a bit strange, but it turned out to be a quote from an old East German worker song. I didn’t know it because I grew up in West Germany.

“China Memories”
China as a construction site. I recorded the sample at the beginning in Beijing when I played there last year. It was a funny morning in the hotel, with nobody speaking much English and me needing a hairdryer…Seven Chinese people with a walkie talkie trying to communicate with me…

“White Oak”
Using beats which don’t make sense. Another tree, a big oak tree. Shadow spender, year counter. The oak hears it all but it is silent. White oak for a floor.