FREE ASSOCIATION: The Morning Benders Take Us on a Track-By-Track Tour of ‘Big Echo’ 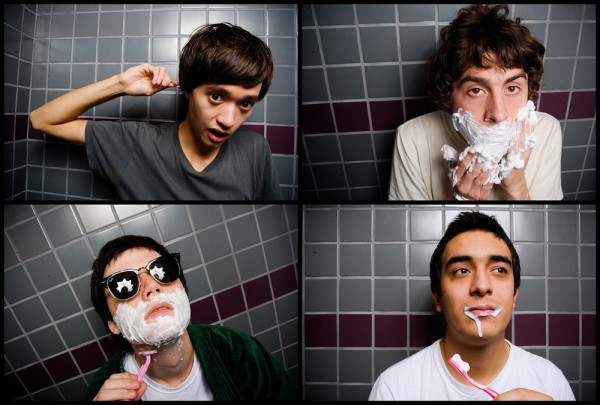 As we quickly discover over fish tacos and bowls of bibimbap at Dokebi in Brooklyn, Chris Chu is an “old soulâ€ right down to the way the Morning Benders frontman name-checks Phil Spector, Alex Chilton, Brian WIlson and the Beatles as his main influences. In one of our more revealing Free Association segments, Chu spent nearly two hours sharing the back stories of Big Echo–an album that actually sounds like one. Here’s the long and the short of it, along with the entire record in streaming form. “Excuses”
The last record was a personal one, and all about projecting. It basically said, “This was my experience and here it is.” Eventually, I got turned off by that kind of songwriting. It felt too much like a diary. Songwriting works more when you have something bigger in mind–something everyone can related to.

So, after writing the songs on the last album, which were relationship songs, this was my attempt to write a song about love and relationships, not in a singular sense, but about love in all its incarnations. The first stanza is about having a physical relationship and feeling love, whether it’s through sex or just a kiss. The second stanza is about having a substantial relationship, finding someone you want to be with seriously. The last stanza is about an 80-year-old couple and companionship and about compromise. I was thinking about all the stages of love, and the chorus is the bridge explaining the hesitance into moving on to the next stage.

â€œPromisesâ€
This is another single. Most people would say don’t put two singles next to each other in the beginning, but we did that. [Laughs] We wanted to start the album in a way that it would convince people to get comfortable and give them a reason to invest in Big Echo and absorb it. This companion piece to “Excuses” changed significantly in the recording process. To give the song that groove–more rhythmic and more riffy than anything we’d ever done before–was something we really wanted to try, to see if we could do it. And we did.

“Wet Cement”
Sonically, â€œWet Cementâ€ felt like a subdued song even when I was writing it. We wanted to make it a dream pop song but give it some elements that would never be heard in that genre, like some reggae elements.

Sometimes with a song, when I write it, it needs to capture a certain mood that I’m feeling. And with this one, I knew I had to keep it mellow. Yeah, I don’t seem like a fragile and melancholic guy, but I have my moments when I want to reflect that mood. “Wet Cement” came from thinking about waking up ten years from now and realizing you have a family and life has flown by. I guess I’ve started to feel older and I don’t regret anything necessarily, but I’m also feeling swept up in commitments and, you know, for me, life really does move quicker now. That notion of “wet cement,” when it’s still wet…before it dries, you should take a moment to see what’s around you. I’m in a serious relationship and we don’t have any friends who have a serious relationship like ours so what does that mean to be this young and be in something which isn’t all that common? One day, I’m hoping to have children and regardless of whether I’m prepared or not, I promise to take care of them. That’s the thought in the chorus. The first line is â€œwe met one day in the wet cement:â€ And those decisions you made back then, those are the ones that remain for a very long time.

â€œCold War (Nice Clean Fight)â€
It’s a song against confrontation. It’s telling people to cool down, get some clarity before you say things you regret or throw fists. It’s actually the song on the album that addresses breaking-up in the most direct way. I’ve seen so many couple break up over minutiae that it seems ridiculous in retrospect.

This is also the poppiest song on the album and we ended it early intentionally (at the 1:44 mark) because that’s what would surprise people. It’s not to be a contrarian, which people will definitely assume. So many of my favorite songs are moments I love that I wanted to play again and again. I wanted people to play “Cold War” over and over again to re-experience it. The label mentioned that it was too short and suggested that we make it longer but I said, it is what it is. I understand that people want more and want to be gratified, and it may not work as a pop song on the radio but it does work well on the record overall. Looking it over as a piece, I’m happy we ended it where we did.

â€œPleasure Sighsâ€
The song is about getting back to enjoying life in its purest form. Social lubricants are fine–I’m not looking down at them, but if you’re living with it for so long, you can get tired of the drinking and partying. The chorus goes, â€œWhat has become of the simple loves that came to me once so naturally?â€ The older we get, the more we move away from the pure point of fulfillment and enjoyment. I’m seeing that now.

It’s the noisiest song on the album, which conveys a tension release of sorts. There’s a long drawn-out delay at the end of it and that’s the expression. Not partaking in what’s going on around you is weird sometimes when everyone around you…that’s their night out. They want to have a good time and party and drink. But what if it’s your life every night? It gets tiring.

â€œHand Me Downsâ€
Sequencing was very important to me and â€œHand Me Downsâ€ was an important song to follow â€œPleasure Sighs.â€ This one is hard to put into words, though. Sometimes songs happen very spontaneously and this one came pretty quickly. But when I’m asked about lyrics:it’s impulsive. The sounds of the words, the phrasing is just as important as the meaning of the words.

Thinking about it now, the notion of hand-me-downs is very interesting to me. I’m an older sibling, in both family structure, and in character. Thinking about what I can hand down is something I wonder about. What can I offer to younger siblings and what wisdom have I acquired from over the years? The end of the song, when all the different vocal parts are thrown together in reverse, that’s the culmination. I get excited about this song more than most of the others, and it feels great playing it live. We’ll only be playing songs from the new album during this tour…because this family of songs need to be played together, as disappointing as that may be to fans.

â€œMason Jarâ€
I tried picturing the different paths of my life and how things could turn out. Some people become so jaded, miserly, and alone when they get older. What would I be like if I became that person, and how would I feel? I was trying to adopt that psyche in which I became someone who refused to give charity, or share. How much control do we have over what we will become? And how can we be sure that we’ll be a nice guy and not an asshole?

I think I started thinking more seriously about life when I was isolated at home. I generally hibernate when I’m done with the tour. I want to be alone with my girlfriend, take walks into the hills, hike…Touring is unnatural. You’re not cooking and eating good food. I cook every day and I find that meditative–you can’t do that on tour. The isolation definitely gets in the way of my social life because people call me to go out and I feel like, “Man, I just want to stay home.”

â€œAll Day Daylightâ€
This song was influenced by certain groove-based bands like the Talking Heads. They didn’t need so many chord changes to make you feel like there was motion. So we tried doing that in the way that “All Day Daylight” has an arc to it with subtle changes. By the time the song ends, it feels so much bigger and at the breaking point–that’s when you end the song.

â€œStitchesâ€
This was one of the first songs I wrote for the album. Again, I had an idea for the song and it works really well in that specific place on the record because it starts really soft. You would think that this is the last song of the album because it sounds conclusive. But it’s also fragile and fucked-up, because, well, there aren’t many lyrics in it. But the idea of the song is how far and to what length we go to try and conceptualize things, trying to find the perfect words. And when we do finally get to the right phrasing, we often hurt people more because of all that time we spent trying to figure things out instead of just connecting. It’s about feeling more than verbalizing.

“Sleeping In”
I always thought that â€œSleeping Inâ€ is the epilogue. Like in reality, â€œStitchesâ€ always felt like the last song but this is the track that finally sums up for me the feeling of Big Echo. This one is striking in the way that it’s so sleepy sounding in comparison to the rest of the record. It was important to ease people out of the record just as it was to ease them into it.

A lot of people talk about [Grizzly Bear’s] Chris Taylor being involved in the record and he brought a great sensibility. I was super happy with what he added to Big Echo. He brings this feeling of nostalgia and vintage that I really dig because of its warmth. I am surprised that people are comparing us to Grizzly Bear as a result. I didn’t really foresee that. I feel like [Grizzly Bear] is coming from this jazz place and I haven’t even explored that. I’m coming from a pure pop place. I guess the way that we’re the same is that we’re also asking people to come back to the record multiple times and spend time with it in the way that it rewards you each time you listen. When people call the record a grower, though, I feel like it doesn’t bode well for us. There’s so much music coming through these days that I hope we’re instant enough for people to get it. I think our intention with the tracklisting was to pull the listener in and keep them around. When we made this record, I did really keep the listener in mind and I hope they can hear that.

Previous MICROWAVE ONLY: Things Are About To Get Dark, Aren’t They?
Next COVER FLOW: In Case You’re Wondering, the Crude Oil On Zola Jesus’ Face Is Chocolate Syrup