Catching Up With… Emil Amos 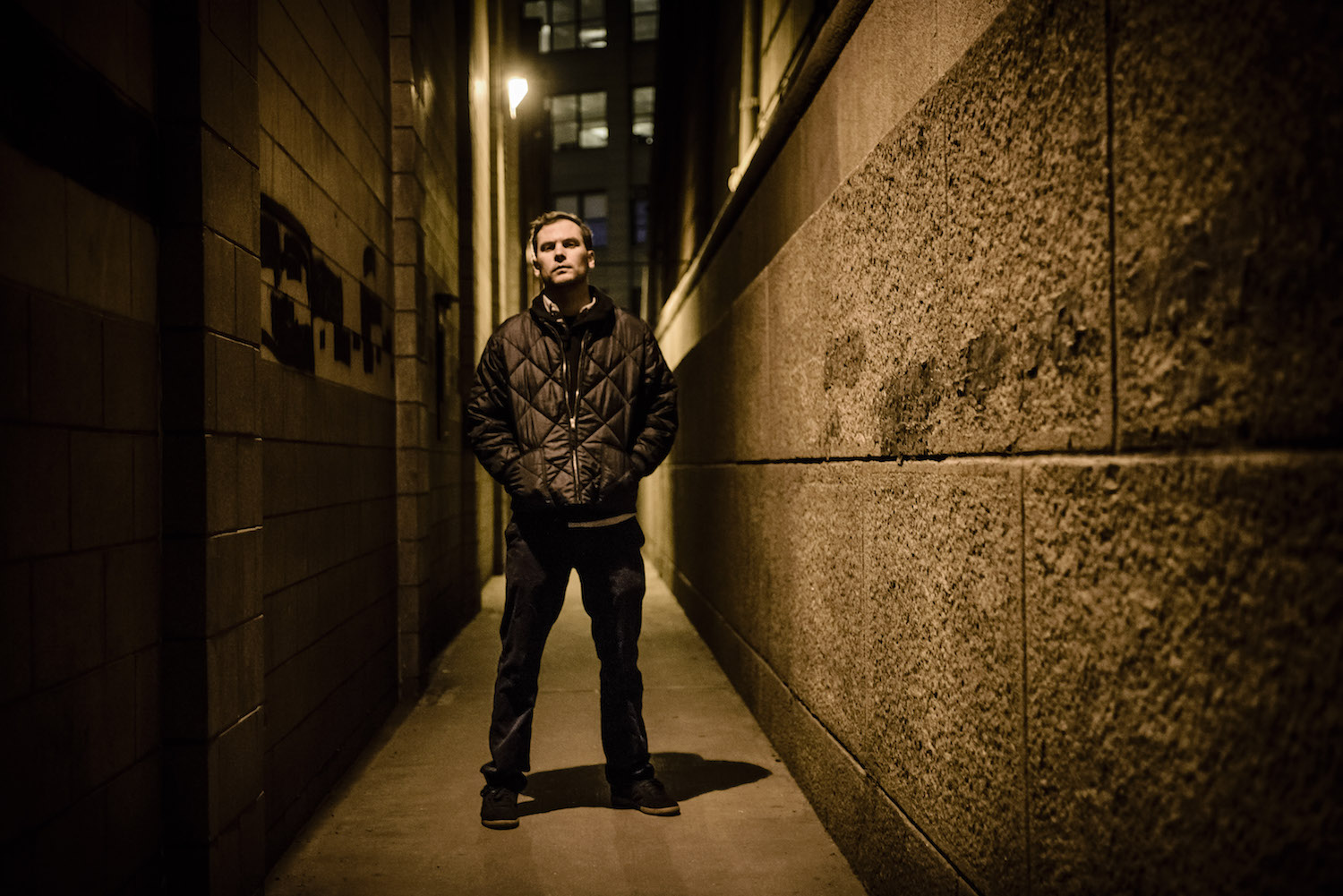 “When I was around 16,” says Emil Amos, “I remember thinking it was only a matter of time before I became this Boo Radley character that scared kids down at the end of their block—a demented 70 year old that’s still 4-tracking distant screams into the night. So in between now and then, my duty is just to record that spiraling pathway.”

The latest transmission from the ever-increasing pile of Amos-related LPs (see also: Om, Grails and Lilacs & Champagne) also happens to be one of his most accessible. Due out August 21st, Fall of Man—like the mystical, cabinet-rattling melodies of Om—isn’t the doomsday device it appears to be.

It’s somewhere in between. Or as the singer/multi-instrumentalist/sample surgeon puts it, “There’s a bit of a double meaning to the album title that could easily be confused. The song ‘Fall of Man’ is largely about the rejection of the myth that man was designed with fundamental flaws that consequently absolve us of our ultimate responsibility. But the phrase fall of man could also imply that we’re living in the autumn of man, still wrestling with the questions of our responsibility and fate as we watch the window slowly begin to close on our time on earth.”

Glimmers of hope aside, Amos makes sure to add, “what kind of crazy person thinks we can avoid the inevitable!?” Certainly not us, which is why we poked and prodded Amos further about the full-length that’s sure to usher Holy Sons onto a grander stage, beginning with a run of dates alongside Earth later this summer…

Let’s start with how Fall of Man fits into the Holy Sons catalog. What sets it apart, and where do you see this project going next?
The next few albums will probably be seen as Holy Sons stepping fully out of the basement for a while because they have a slightly more focused recording quality and we’ll be touring consistently for the first time ever.

When I was around 16, I remember thinking it was only a matter of time before I became this Boo Radley character that scared kids down at the end of their block—a demented 70 year old that’s still 4-tracking distant screams into the night. So in between now and then, my duty is just to record that spiraling pathway. Fall of Man specifically tries to reconcile the usual loner vibe with aspects of bigger-sounding ’70s records like Hunky Dory and Dark Side of the Moon.

Your solo work continues to celebrate the power of traditional songwriting—the sort of records that were celebrated more in decades past. What are a few albums that left a deeper impression on you due to the inherent power of the songwriting within them?
I really like the idea of traditionalism, probably because I could never be a real traditionalist. I can fake it because I’ve been obsessed with all those classic records for so long, but I’ve always approached music with an entirely self-taught, experimental mindset.

It depends what angle you’re listening from I guess. There’s avant-garde elements to John Lennon’s Plastic Ono Band in its radical directness, or a minimalism in Jackson Browne’s arrangements on Late For the Sky. There’s an untouchable sort of purity or inner loyalty to Nick Drake’s Five Leaves Left. So maybe it depends on what aspect of their art you’re focusing on. Ravi Shankar could be the epitome of traditionalism to one person and sound like an unfocused mess to another.

I don’t see any overall solution in any particular direction, but it’s kind of a perfect time for me to try and put some ‘classic American songs’ in the Holy Sons catalog. Especially as we’re playing live more than ever now, it makes sense to have some recognizable/immediate songs instead of just tape recorder experiments or relentless jamming y’know? I can still get so much experimentalism out of my system through other projects like Lilacs & Champagne or Grails too.

https://youtu.be/Wq0e4Y7sYYk
Classic rock is practically a dirty word these days, especially among younger listeners. If you could hand a 16 year old any album from the ’70s as a testament to the potential of classic rock, what would it be and why?
Categories and rules in music seemed much more steadfast even just 10 years ago. I think the internet culture and just general boredom have broken a lot of those boundaries down. And every device bands tend to use now was largely built upon ‘classic rock’ anyway, so if you tried to remove that it’d be like trying to remove Latin from our language.

Physical Graffiti was definitely one of the major agents in making me who I am musically; I guess that’s the one.

Many people are going to consider this album one of your “poppier” efforts. Considering how long you’ve been working on music under the Holy Sons name, has that always been the goal—finding a way of reaching more potential listeners while still retaining a lot of the heavier, deeper themes that have always been there?
Yeah, that’s a totally fair assumption, but I think the whole methodology and identity of this project was molded before the concept of an audience was ever really allowed to come into the equation. And even the records I made that were more friendly—like I Want to Live a Peaceful Life—weren’t really heard by anyone, so those songs kind of operate as a tribute to a particular style of folk music in general.

I’d always assumed I was left alone to do whatever I felt like and just tried to seize that freedom the best I could. Any style presents its own challenge inherently. Even a song like “Hey Jude” begins as an experiment for its writer and that person just wants to see what happens if they follow where that song wants to go. So I’d say that the songs that are constructed in more of a pop mold are still experiments for me that operate as a pure challenge to get down to a very direct form of speaking that doesn’t waste any time.

You worked with three producers on this record: Brandon Eggleston, Al Carlson and Jeff Saltzman. How would you describe each of those sessions and how did you make sure the album kept a cohesive vibe considering it was cut in several cities?
In terms of bringing the vibe together, generally sequencing and mixing it myself tend to bring the disparate elements into focus. I’m more of a fan of albums that have a lot of variety rather than overly-cohesive records that are built upon all the same sounds anyway.

Jeff Stuart Saltzman mastered Lost Decade back in ’99 and we’ve been working together intermittently ever since then. We’ve always had a shared, specific obsession with the late ’60s psychedelic bands like Kaleidoscope, so our aesthetics always come together in a really natural way. I never could’ve done a lot of songs like “A Chapter Must Be Closed” or “Discipline” without him.

Al Carlson and I met thru working on Lilacs & Champagne records for Mexican Summer and he’s been my essential bridge to making records in Brooklyn. He helped make records like Oneohtrix Point Never’s Replica and came up studying jazz so he always brings a lot of killer skills to the table. We’ve been working on some new Om stuff together too.

Brandon Eggleston and I met about 10 years ago in Portland and worked together on a soundtrack we haven’t released yet so I’m glad his name will finally be on a Holy Sons record. He’s a really wise engineer that understands the subtle balance between technical and social skills in making records and touring and I think he really helped make “I Told You” one of the best moments on a Holy Sons record so far.

Are you working on other music right now or focusing on Holy Sons?
It’s basically the 10-year anniversary of the two major turning point records Grails and Holy Sons made, so we’re putting together special vinyl reissues of the original Black Tar Prophecies and Decline of the West. (Both of which have climbed towards $100 on Discogs.) We’re also chipping away at the next Om record while I’m slowly writing a record with my old friend Duncan Trussell.

Tell us a little bit about the live band you’ll be taking on tour with Earth. How do you see that aspect of Holy Sons evolving?
My old buddy from Portland Dan Wilson started up a band here in NYC called ‘Dommengang’ with Brian Markham and Adam Bulgasem and they help me flesh out and re-arrange all the songs for the live shows. We take all the most memorable songs from the old albums (More Mind Briars, The Feral Kid, Drifter’s Sympathy) and change them up while adding in the newer singles to try and hit all the aesthetic bases we can in the live set. Life as a band in NYC can be fleeting and rough so we’re just trying to say yes to everything over the next year and see where our bodies and minds land after we’re on the other side of the wreckage… pray for us.