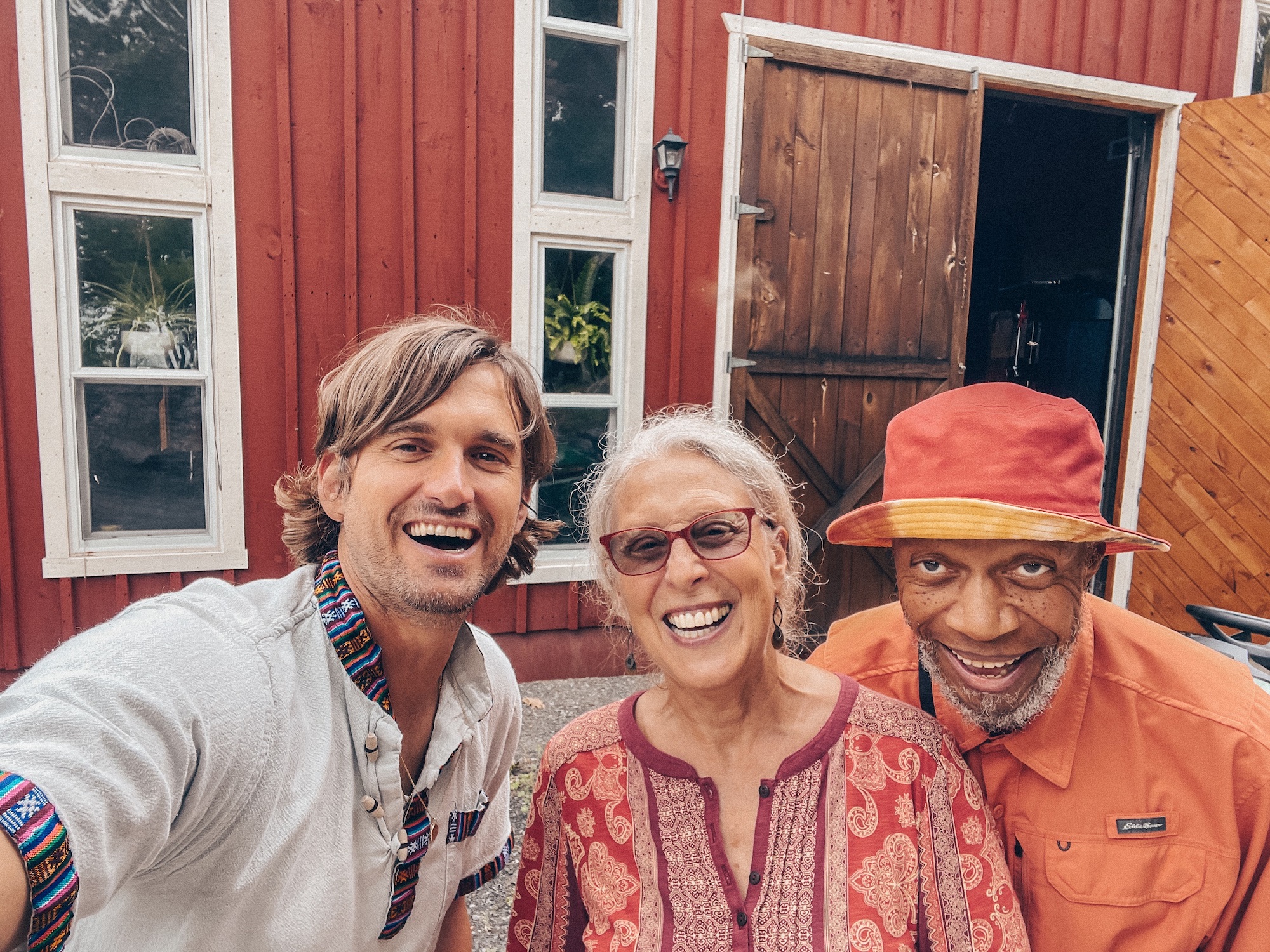 I first heard Laraaji‘s music the day after I first met Laraaji.

I sat down for lunch at Ananda Ashram, where I was taking a Nada Yoga Sitar workshop with the late sitar master Roop Verma, and serendipitously happened to sit across from Laraaji and his wonderful musical partner Arji OceAnanda. I had no idea who Laraaji was, but we struck up a pleasant conversation about music and found we had a mutual interest in the teachings of Zen master Thich Nhat Hanh. I was immediately connected to the loving and compassionate energy of Arji and the otherworldly present wisdom of Laraaji. 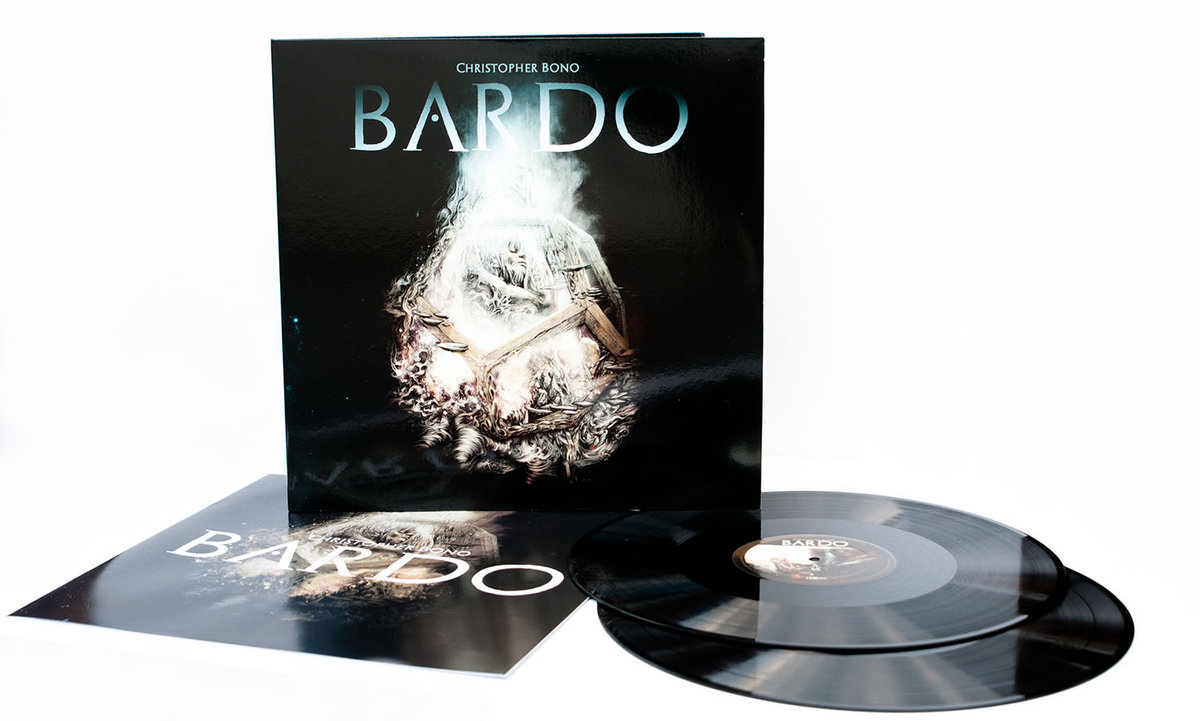 Earlier that year, I had finally completed a three-year project composing and producing an exceptionally intense conceptual multimedia work written as a requiem to my late best friend, entitled Bardo. The project was an orchestral work that utilized ambient and sound healing concepts derived from studying for a year with various sound healers and therapists, who were, unbeknownst to me, almost all friends with Laraaji and Arji.

The end of that album led me to design a musical project that would be as far removed from the Bardo project as possible; this was the genesis of the improvisational ensemble NOUS. At the time I met Laraaji, I was one month into designing and writing conceptual ideas for the NOUS project and was in the process of curating the roster of players. After attending a yoga class the following day where Laraaji and Arji performed — for some reason I don’t entirely remember — I invited them to join us at Dreamland Studios for a special afternoon with the group of avant-garde and contemporary classical performers who would be exploring a blend of improvisation with the esoteric.

In retrospect, it seems some sort of Providence was at play, as I was guided into a session with two musicians in which I had no idea what to expect. During the session, I sat directly in front of Laraaji and Arji, and we spent four hours flowing through musical ideas in a circle surrounded by an immensely talented group of improvisers.

As the session unfolded, I was immediately struck by the power of Laraaji’s performance presence. It is very hard to communicate without using hackneyed spiritualized terms, but his sense of being — and, on that session, his connection to his instrument and voice — was unlike anything I’d sensed, even from some of the most talented players in the world. There were moments where he channeled inspiration, like in the culminating “cry from the wilderness” [mantra] heard on the “Hari Ram” track from the Circle of Celebration record, that left chills tingling down my spine.

After the sessions, I went up to Laraaji and asked him how he sang in such a way; were there any methods he had cultivated over the years to help him access that inspired place? His perfect response was, “I just open up and trust.” Simple words I have carried for years, and likely will be reminded of for the rest of my life.

Having known Laraaji now for seven years, I’ve come to admire how he is a rare example of someone who truly experientially lives the teachings he has received; by being around him and witnessing the course of his actions and through his music, I have seen his teachings emanate often in subtle ways.

Laraaji, and perhaps also the Iranian musician Davood Azad, are the only musicians I’ve encountered in person who truly seem to have a connection to another realm — one which you hear only about in myths or scriptures. In the light of these experiences with Laraaji, I can only suggest a path of listening I feel highlights the trajectory and qualities of such a great being….

This is the obvious starting point for any exploration of Laraaji’s work. Devoted fans might feel this is too obvious, but as the 20th century musical pedagogue Nadia Boulanger regularly quoted, “Don’t avoid the obvious!”

There are many reasons for why one should start here. Brian Eno had a major impact on Laraaji’s life and career. In a wisdom infused sharing on the practice of mind science, Laraaji explained how this study radically changed his view on the relationship of his thought patterns to how real world events unfold based on the tone and quality of his intention. At the time, Laraaji claims he began asking the ever-present now field not for any specific producer or event for his music career, but for the “right producer”. 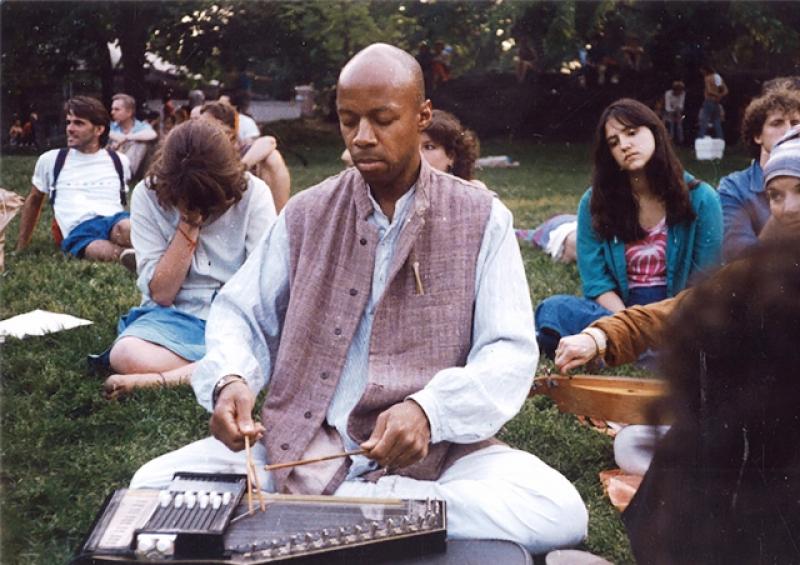 Shortly after he began verbalizing these affirmations he was busking, as he often did, at Washington Square Park, when Brian Eno walked by him. Eno stopped to listen and became mesmerized; afterwards, he left his information with Laraaji requesting him to stop by the studio the next day. This collaboration with Eno was a shapeshifting doorway for Laraaji that opened many new streams of possibility leading Laraaji’s music into the ear consciousness of so many through that singular chance moment.

The album is simply an ambient and minimalist masterpiece. It holds up exceptionally well 40 years later. Though Laraaji’s music has been labeled as ambient, it is unique in that it is often highly rhythmic and more akin to the sound world experience conjured by minimalist founders Steve Reich and Terry Riley than much of the drone and arhythmic textures that New Age and ambient music is known for.

I believe Laraaji feels disconnected from labeling music, and I share an affinity for this perspective. However, considering the human mind’s need to compare and contrast, Laraaji’s music is better described literally as trance rather than ‘New Age’, as the repetitive rhythmic qualities mixed with the effect-oriented ambience truly leads one into a state of vertical concentration often described as trance. 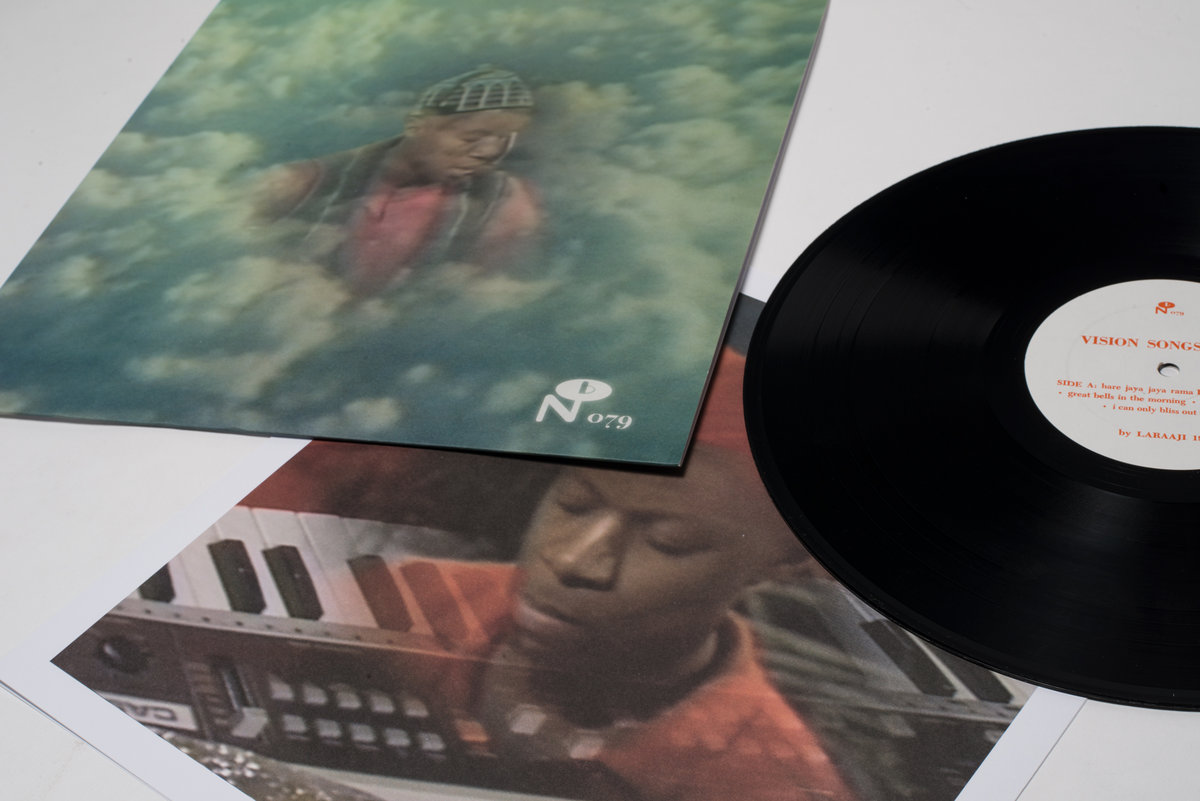 I consider this album a conceptual lo-fi masterwork; long before lo-fi was even a thing, it radiates lo-fi coolness. Laraaji’s delay-infused vocals are mixed with ’80s loops and a low-cost Casio keyboard to offer a sound that is reminiscent of 2010s Williamsburg hipster DIY venue performances. The lo-fi indie electronic palette again sounds timeless, and it acts as a simple, humorous, innocent cushion for Laraaji to share his insightful channeling of spiritualized ideas. I hear it as a collection of magic songs, a Laraaji version of the Amazonian Icaros, shamanic songs channeled from other dimensions.

Though the messages may sound trite to the cynical ear, by deeply reflecting upon what Laraaji is saying about the importance of presence, awareness, and gratitude, one could see that most of the self-defined problems and negative ruminating thought trains that tend to control our lives could receive immense relief from applying these deceptively simple insights Laraaji points out to us. 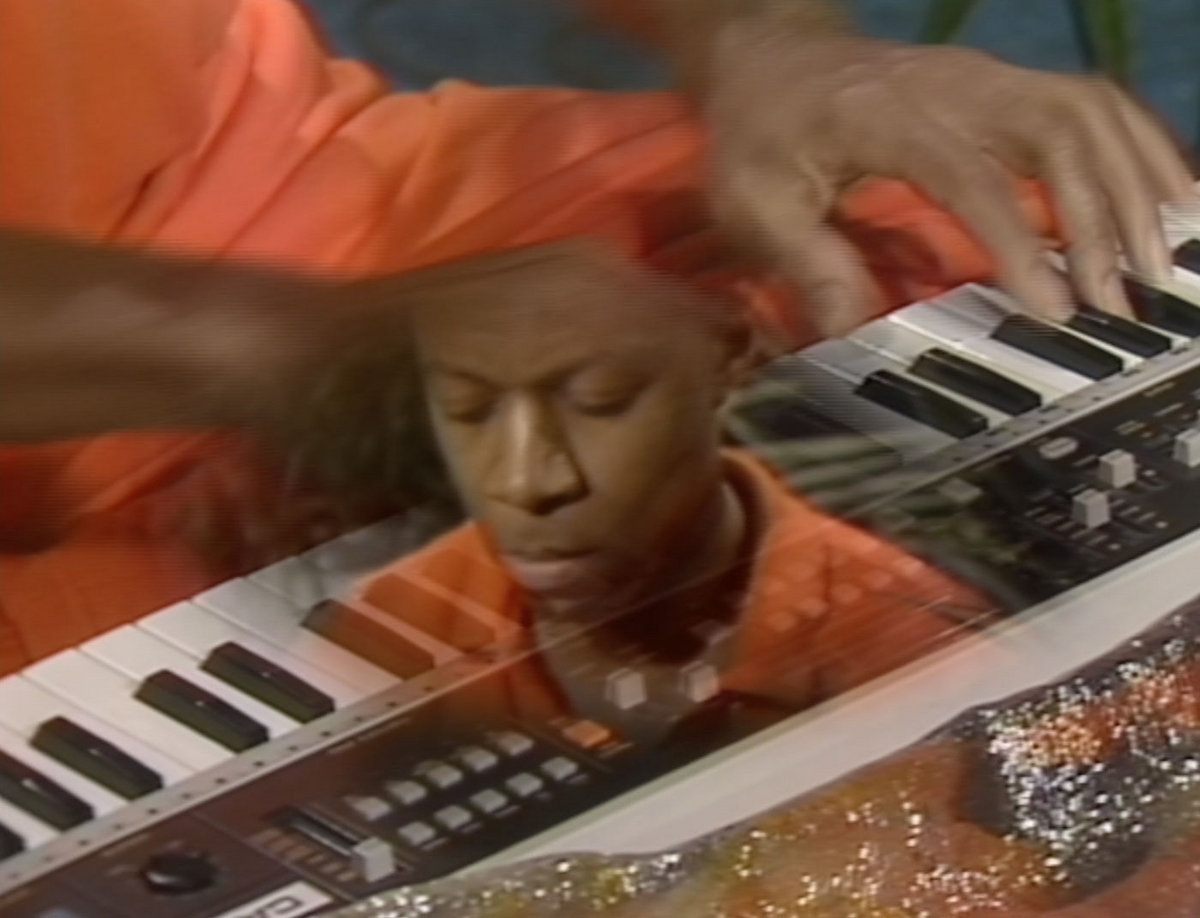 I will again emphasize from having the fortune of knowing Laraaji in person, he is a rare being who authentically lives these teachings in his day-to-day life and interactions. I’m always amazed by the level of discipline and mental self-mastery he has developed through meditation practice to not engage in negative speech or gossip when conversations are brought his way. I’ve noticed that this equanimous capacity not to engage in the energy of negative speech and thought dampens the momentum that such conversation develops.

Like it is said of historical gurus and mental masters, the aspect of self-hood becomes so transparent that in their presence they act more like a mirror to your own complexes than as having noticeable complexes of their own. As a self-described ‘recovering pessimist’, I experience this non-self quality firsthand whenever I interact with Laraaji. I feel my own insecurities and negative habit patterns become present and clear when communicating to Laraaji because he is so good at not engaging, you are truly left holding the bag of your own rumination.

FOR SERIOUS FANS ONLY
FLOW GOES THE UNIVERSE
(ALL SAINTS, 1992) 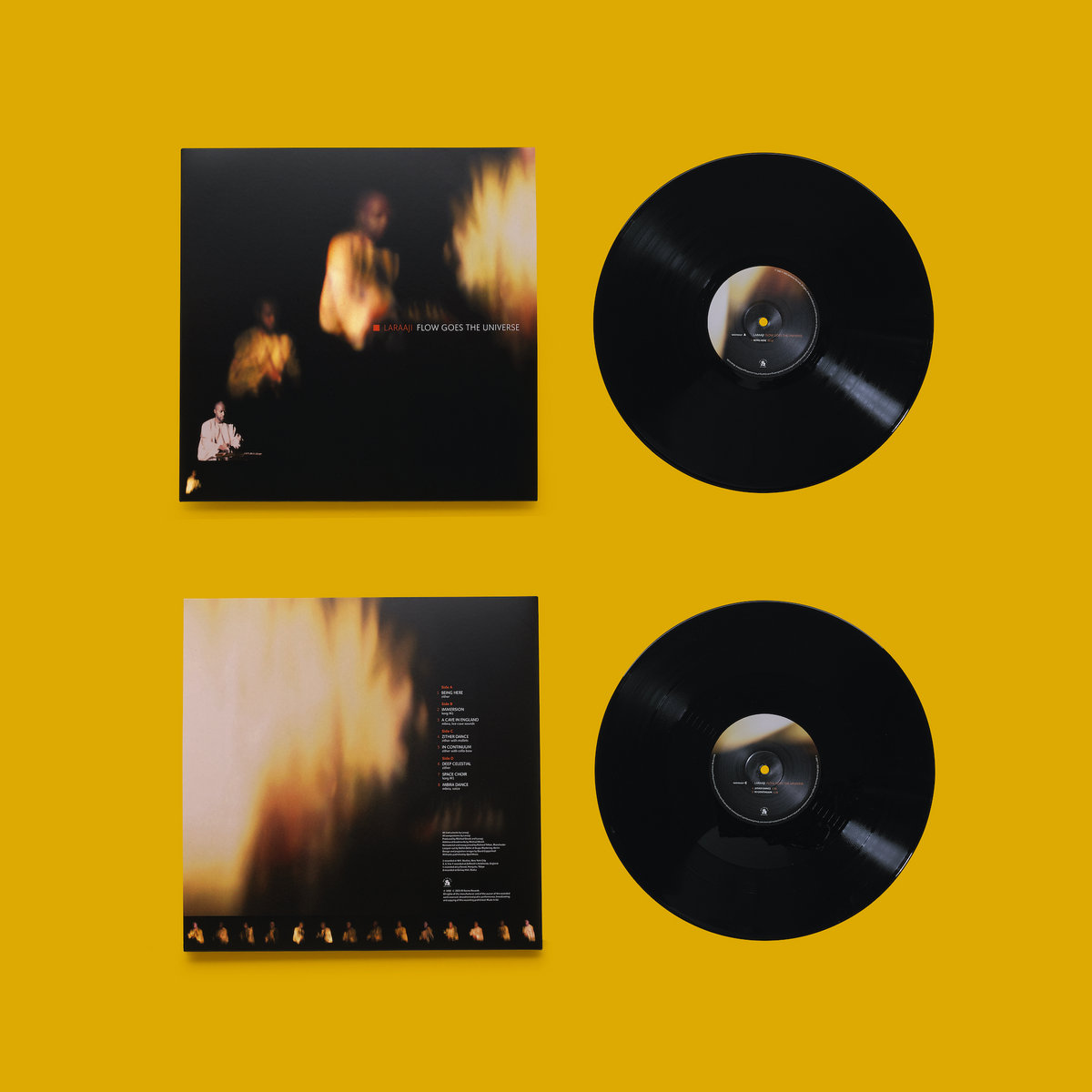 This choice could go so many ways as Laraaji’s musical output has a similar valuable quality to me. I chose this album because there is a flow to it that does a tremendous job of representing the scope of Laraaji’s style, while it is simultaneously one of the most calming and conducive albums to meditative states within his catalogue.

As a composer-musician and devoted meditator, I prefer not to use music or recordings in any formal meditation practice, as I generally find them a distraction to the process of deeply perceiving and sensing the inner thoughts and feelings of the mind-body phenomenon. However, I find Laraaji’s music particularly special in the realm of music labeled ‘meditation music’. I’ve seen the magic of his music work wonders on putting a restless 1 year old to sleep when little else works, and even if people are not completely conscious of it, you can see the subtle ways in which his music calms the nervous system of whomever comes into the presence of his sound waves.

I attribute this notable function of his music to the fact that the man behind the music has done so much inner developmental work on his mind that the results are exceptionally clear for one who can perceive this quality. Laraaji has become an inspiration in my life by showing how a person can instill skillful art in both their work and in their day-to-day living simply through the force of discipline, will, and the moment-to-moment choice of whether you react to life in real time with negativity or with humor, gratitude, awareness, and wisdom. 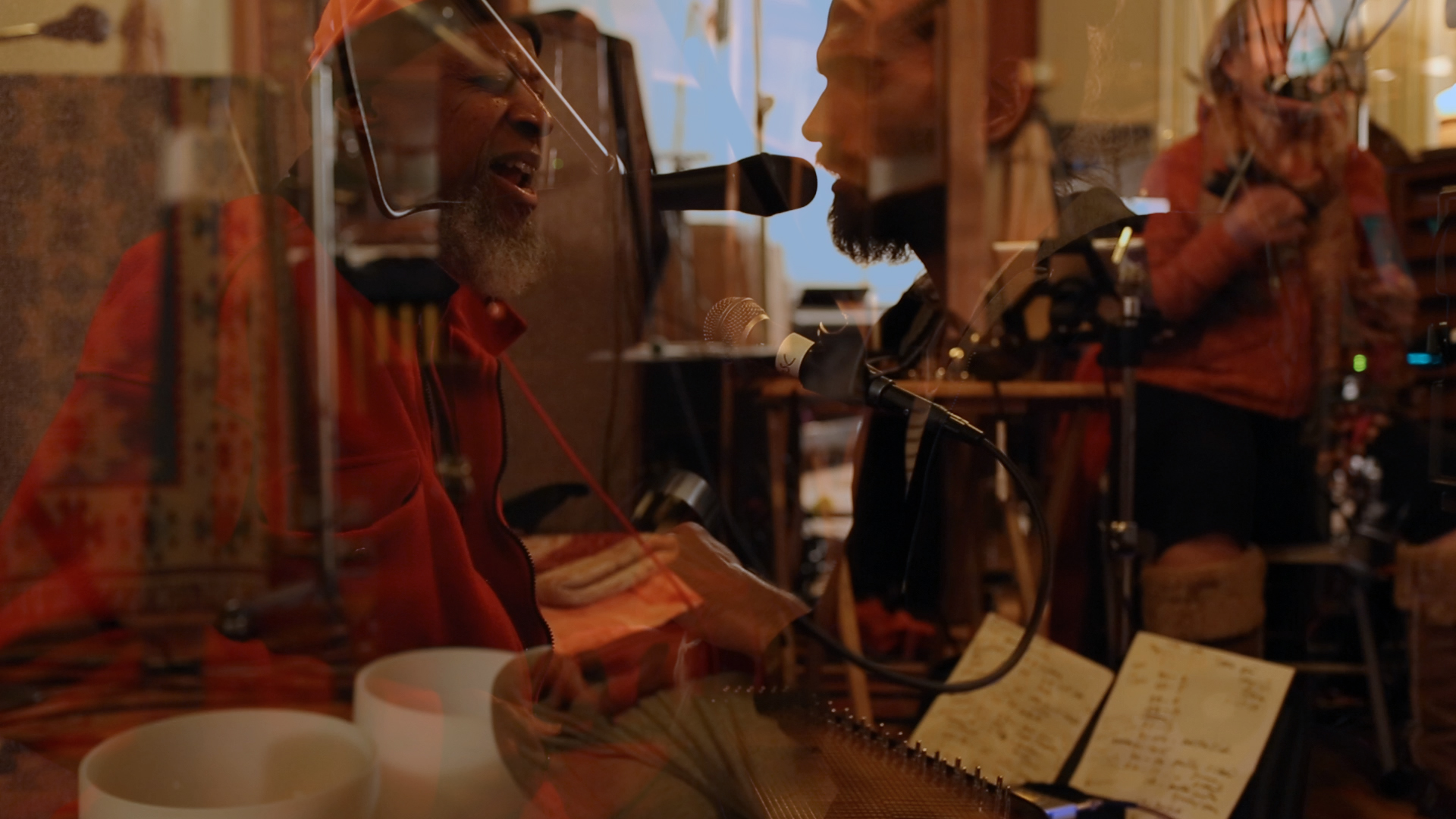