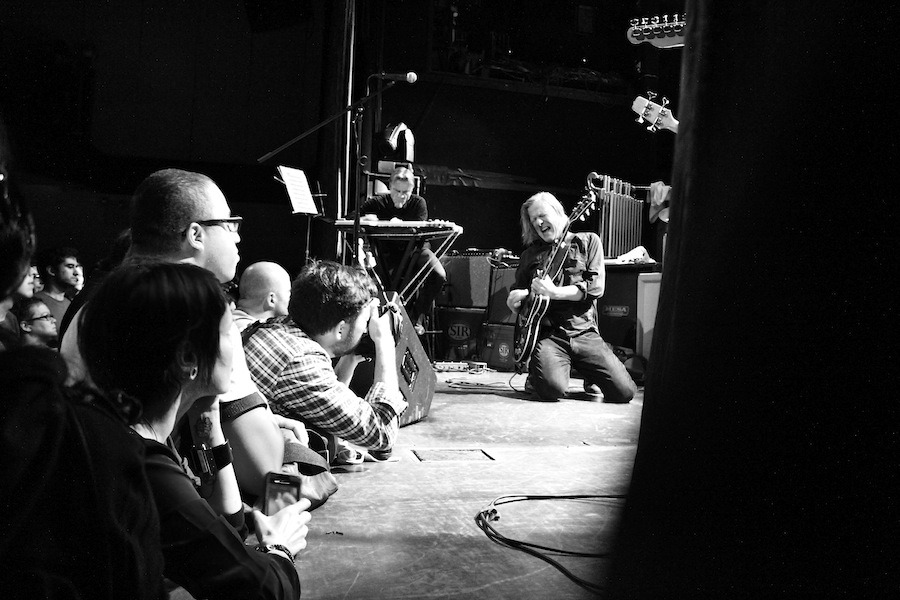 As we first witnessed at the Brooklyn Masonic Temple a couple years ago, the second-coming of Swans doesn’t really play ‘songs’ at their shows. Especially now that they’ve got The Seer to support. With its scorched earth sprawl leading the way down transcendence lane–or as the double LP’s display copy puts it, “an unfolding cosmic heave of bliss, love, blood, and light…oblivion through sound”–it’s clear Gira wasn’t kidding when he told us that Swans’ fall tour might include three-hour sets and a 50-minute version of “The Seer.” All told, last night’s triumphant Bowery Ballroom show clocked in at around two and a half hours, splitting its set list between the group’s new album and tracks that are still in the rehearsal stage. Not that you could tell which is which, what with the way their wall of whiplashed sound blurs into a drone-y, thrash-y series of cacophonous battle cries and masochistic mantras. One exception being a brutalized reboot of “Coward,” a cult Holy Money favorite that’s driven by grimy industrialized grooves and lines like “I love you/I’m worthless/Put your knife in me/Walk away.” Hearing its 26-year-old cry for help updated by Swans’ current incarnation hammers home Michael Gira’s insistence that the past couple years hasn’t been a reunion so much as something else entirely new–something that’s fueled more by their collective future than fits of nostalgia.

Onward and upward then…

Swans, Bowery Ballroom, 10.10.12:
To Be Kind
Avatar
She Loves Us
Coward
The Seer
Nathalie
The Apostate