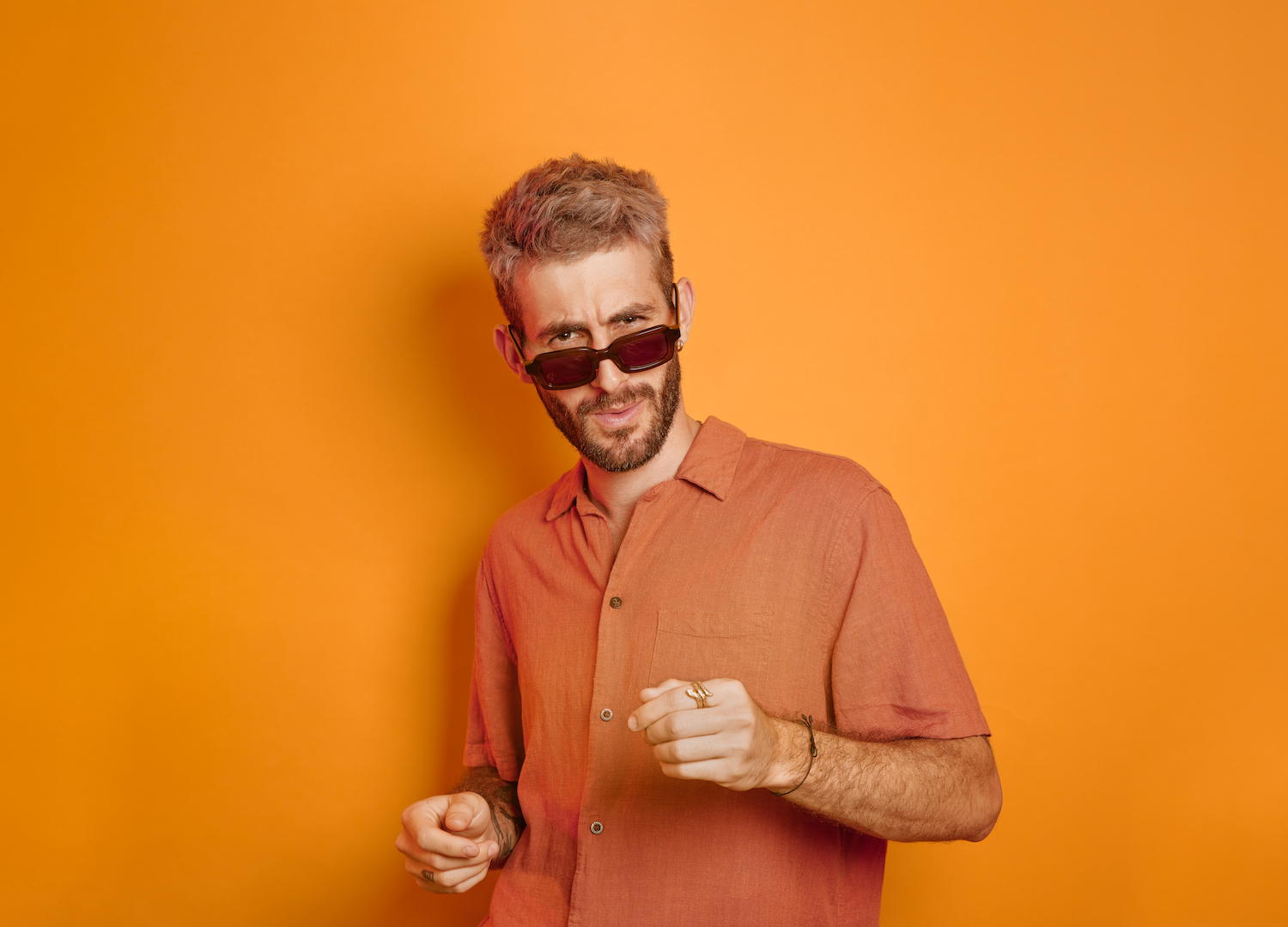 While Claude VonStroke has always been partial to the truly progressive house tracks of Lubelski, he certainly didn’t expect the producer to spend most of his LA-based lockdown churning out modular synth clips for Dirtybird’s Twitch channel. As unhinged as the weekly broadcasts were — sometimes for hours at a time — they were also full of formative ideas that could easily be applied to a far more focused album.

And that’s exactly what Lubelski did for his first Dirtybird LP (Happy Accidents); he built 12 proper songs on the back of seemingly endless jam sessions and constructive fan critiques on his own Twitch and Dispatch channels. Here’s how it all came together, according to Lubelski himself, along with some exclusive footage from the live performances that led him down this road in the first place….

For the intro, I wanted to do something that really let me show an exploration of sound design. I basically just messed around with a few different modules for this one, namely Make Noise Q-Pas, Steady State Fate Entity Percussion Syntehsizer, and Mutable Instruments Plaits. It was mostly a lot of high resonance filter sweeps with Q-Pas, messing around with the Entity’s pitch FM knobs, and throwing random sequences through Plaits’ sound selector.

I chopped up the sounds a bit and vocoded myself acting a fool on the microphone, and voila, the intro was complete.

Most of the sounds for “Asylum” were made solely with Intellijel’s Atlantis module. It’s basically a small version of the SH-101. The patch was really simple, actually; just one sequence was used for the whole song. But where the lead gets a little more complex was the live automations of the frequency modulation rate and depth, along with the filter envelope’s release.

Through some clever looping and sound processing, I was able to take this two-minute recording of me going absolutely crazy on the automations and stretch it out into a full track. Probably one of the most fun to work on.

The initial idea of this track was formed around the lead around 2:30. I found a really cool sounding 1/16th note baseline from earlier in the jam and they just worked really well together. I really wanted to make at least one of the tracks feel sort of rave-y and trance-y, so I sang a lot of the chords and vocal sounding swells, gave them 1/16th note tremolo, and it all came together very nicely.

This is one of the last tracks to actually get finished for the album. Claude and I had one in-person session together where he brought this Pioneer MPC thing that neither of us really knew how to use. We started with getting a loop going on it and finding some cool rhythms that we both liked.

From there, we went modular to get the bass and the leads. For the bass we used Atlantis and for the lead we re-routed the bassline though Rossum’s Panharmonium Mutating Spectral Resynthesizer. By sweeping the analysis frequency we were able to get some interesting tonal sweeps that emulated the same rhythms of the baseline.

When we finished the session, Claude totally to get silly on the mic and write about something like going to an ice cream shop. I sent him a bounce that night, and he said, “This is great! I just wish you were good at singing!” So we tagged Life On Planets to get in the studio and lay down the top line.

“Satisfied” started out as a loop that I originally wrote with my Fender P Bass. I really loved how funky it was. All of the processing for this song was doing with my modular rig though. I sent out the original baseline into Q-Pas with some random LFOs to give it that really squelchy, squishy sound.

A lot of the percussive tones were also processed with modular stuff. I sent the bongos and guitar riffs through Endorphin.es Milky Way FX module. I just went nuts on the flanger and rate, and recorded everything.

I got Danke in the studio to write some vocals and she actually helped with some of the live modular processing stuff. We wanted to go for a very sultry vibe, and I think she nailed it!

“Why Do You Do The Things You Do”

I used Rossum’s Trident Multi-Synchronic Oscillator Ensemble to create the bassline and the lead for this one. Trident has these really great tones — everything from very simple triangle, sawtooth, and square waves to incredibly complex frequency modulated timbres using symmetry, pitch, and phase modulators. I usually just sequence everything with my Intellijel Metropolis, but decided to go with writing it all in MIDI.

I actually came up with the lyrics for this one while taking a shower. I thought the alliteration was fun and the lyrics were deep. I used Panharmonium as a vocoder to layer underneath the original vocals.

When I got in the studio with Ardalan, he came to me with a very skeletal beat — just kick, clap, hi-hat, and a sort of super sub-y tom drum bassline. We messed around with pretty much every module in my arsenal to get the sounds we used for the track; Panharmonium for the chord stabs, Trident for through saws, Q-Pas for the filter sweeps, Entity and Plaits for some of the percussive hits, and Morphagene for some of the FX.

I made “Out of Phase” with Wyatt [Marshall] in kind of the same work flow I used with Ardalan. I had made the bassline in one of my live modular jams, but Wyatt and I just played around with a bunch of our modules until we had a bunch of sounds to chop up together, which included a lot of Q-Pas so for the high resonance leads, Panharmonium for the vocal processing stuff, and Metropolis for some FM plucky things. Wyatt bought his modular rig to my studio as well. It was made more in that style of meticulous micro arrangement as opposed to the off-the-cuff live improvised jams that the started the rest of the ideas for the album.

“You Keep Me Up Late”

The song started with the low-mid synth that comes in around the one-minute mark. I can’t even remember how I made it sound the way I did; all I know is that it went through multiple iterations for sending the sound back out from my computer and the modular rig until I get this very vocal-sounding lead. I ran the lead through Panharmonium a couple more times to get those off-putting synth sounds like the droning sound that comes in the last breakdown and those massive dissonant chord stabs that come in on the last drop. Panharmonium was also used on the vocal processing a bunch.

This might have been one of my favorites to make from the album. I used a lot of “probability sequencing” for the lead on this one with Malleko Heavy Industry’s Varigate 8+. With the Varigate, I’m basically able to set certain “gates” or “note timing” anywhere between 0 and 100% probabilities.

I did a couple iterations of the lead and layered them on top of each and reversed some of the sequences to give the track a feeling of uncertainty. I used the varigate to sequence the percussion that comes in on the last drop. I also used Panharmonium to process my vocals in a way that made them sound like a crazy FM chord / pad.

Another one of my favorite tracks to work on from the album.

Again, I used almost every module in my modular rig to make this one. The bassline was made from Intellijel Atlantis and sequenced with Metropolis, a lot of the chords sounds were made and processed with Trident and Panharmonium, respectively. I ran the entire drum kit through my Sherman Filterbank to give the track some grit.

It was just one of those songs that really came together quickly and I felt like it just worked to keep it in a sort of jammy arrangement.

House Alias and I have been friends for a very long time, so to finally have gotten to work with him was really great. He’s one of the most meticulous and interesting producers I know.

The starting point for this track was made with Panharmonium. We ran a string sample that he had through it and messed with the timing of the analysis of Panharmonium to get the arpeggiated chord stabs. From that recording we sampled and re-sampled to get all the weird swells, blips, and lead type things you hear through the track.