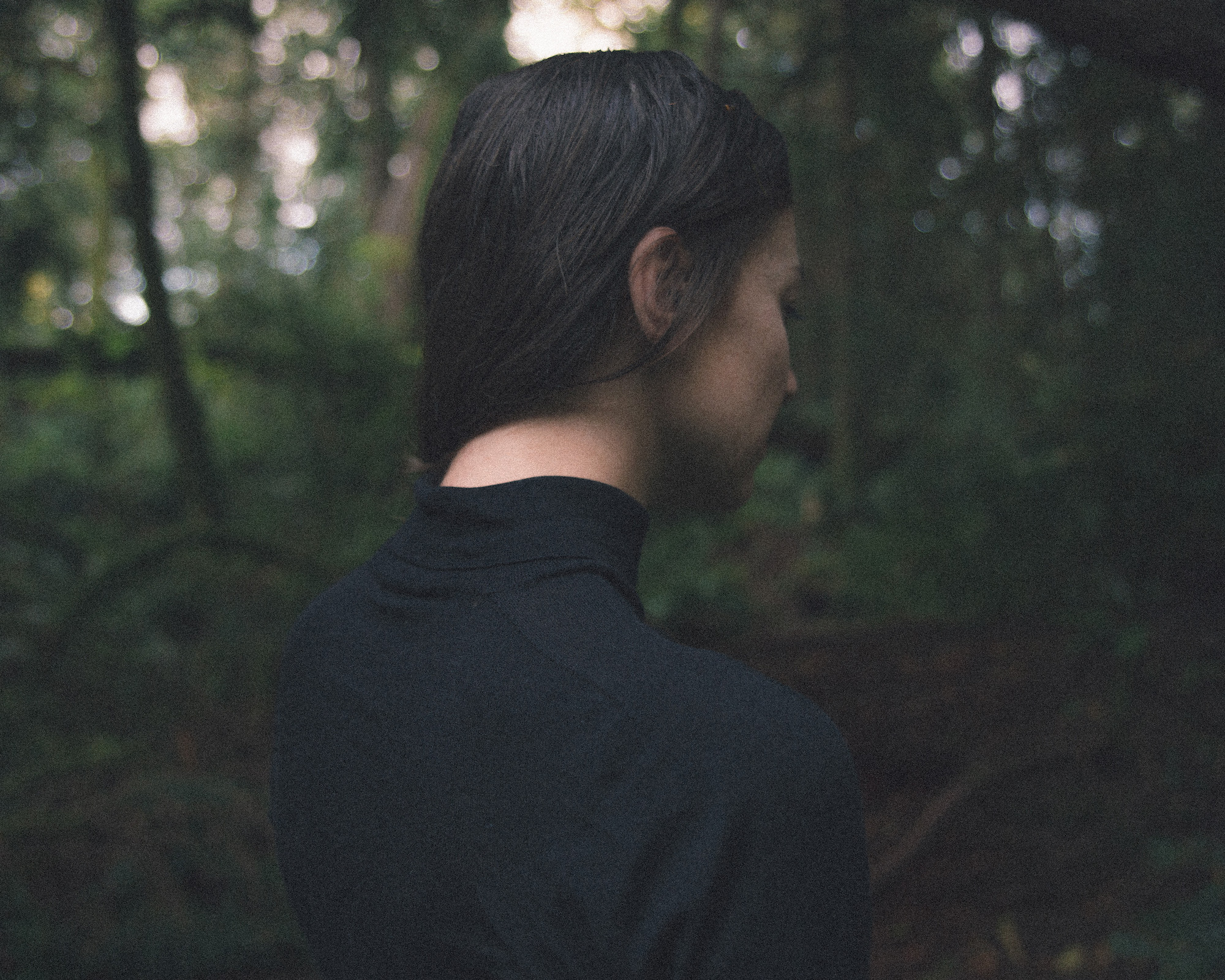 The following paragraphs were taken from notes I gave to our producer Randall Dunn. I wanted to work with him on an abstracted emotional level with this recording (The Brilliant Tabernacle, now available through SIGE Records), where he would transform the sounds psychologically to meet the magical needs of the song stories we presented. I wanted the overall record to sound like a large party in a house down the street, where you can feel the vibrations of the music, and you know there is a community together in the home over there, and you want to become a part of that and you want to come in.

Another was, I wanted the sound of my voice to be inside the mind, between the ears, and I wanted the inside of the mind to be as large and as full of space as there is space in the universe beyond this earth. I wanted to replicate the sound of a hallucinogenic experience, where events are pristinely clear and psychedelically blurred all at once. The way the recording is presented is as a backwards narrative, where the beginning is actually the end. So we will start at the “end”….

“TO BE SEEN”
Finding the ground to plant the seed.

This is the story of inherited memory, and of communicating with watching and guiding spirits. I was trying to communicate back in time to my mom’s mother, and my grandma’s mother, and on and on to their great grandparents. I did not have a large extended family growing up. I wanted to feel the soil and the air where my mother’s side of our family lived for centuries — what they called home before people had the ability to move and immigrate. (As my great grandparents did from Yugoslavia, Hungary, and Italy.) And I wanted this sense of home and belonging to be contained in this song as an origin story for my son to hear. The lyrics are composed based on a pattern woven on cloth from my great grandmother. The pattern is made up of codes. Women’s bodies become diamond shapes, mimicking planted fields. Women holding hands with babies upon their heads become flowers.

The beginning of a creation myth: “You are one of us, heavens touch the earth.”

“HYMN OF EROS”
Choosing to plant the seed.

“Eros once more ordered all the varied forms of life by the girdle, sowing the circle of the well-plowed earth with the seed of generation.” How does energy choose to become human? Energy and light contain all information. Light acted upon or observed affects a particle in a different location, and everything is intwined, and interrelated. This is the story of energy in wait, in a dark space, becoming light, with will and choice becoming it’s fate.

I was trying to contain the psychedelic psychology of choosing to create life, and the choice that can be made to save the soul, or create a soul, as the soul is energy. How life creation is a parallel to hallucinogenic substances, both contain the holy internal force of an exorcism. Transformation and transmigration have an affect on the body. A new soul entering the body affects all parts of the body and mind. Two souls can become intertwined as does the mothers and fetus’ DNA in pregnancy. Creation from nothing, energy and light from primordial darkness.

The intermediate state: “Who will they follow? One will follow the other. Who will the other follow? You? To bring the dead back to life, in the earth born anew.” 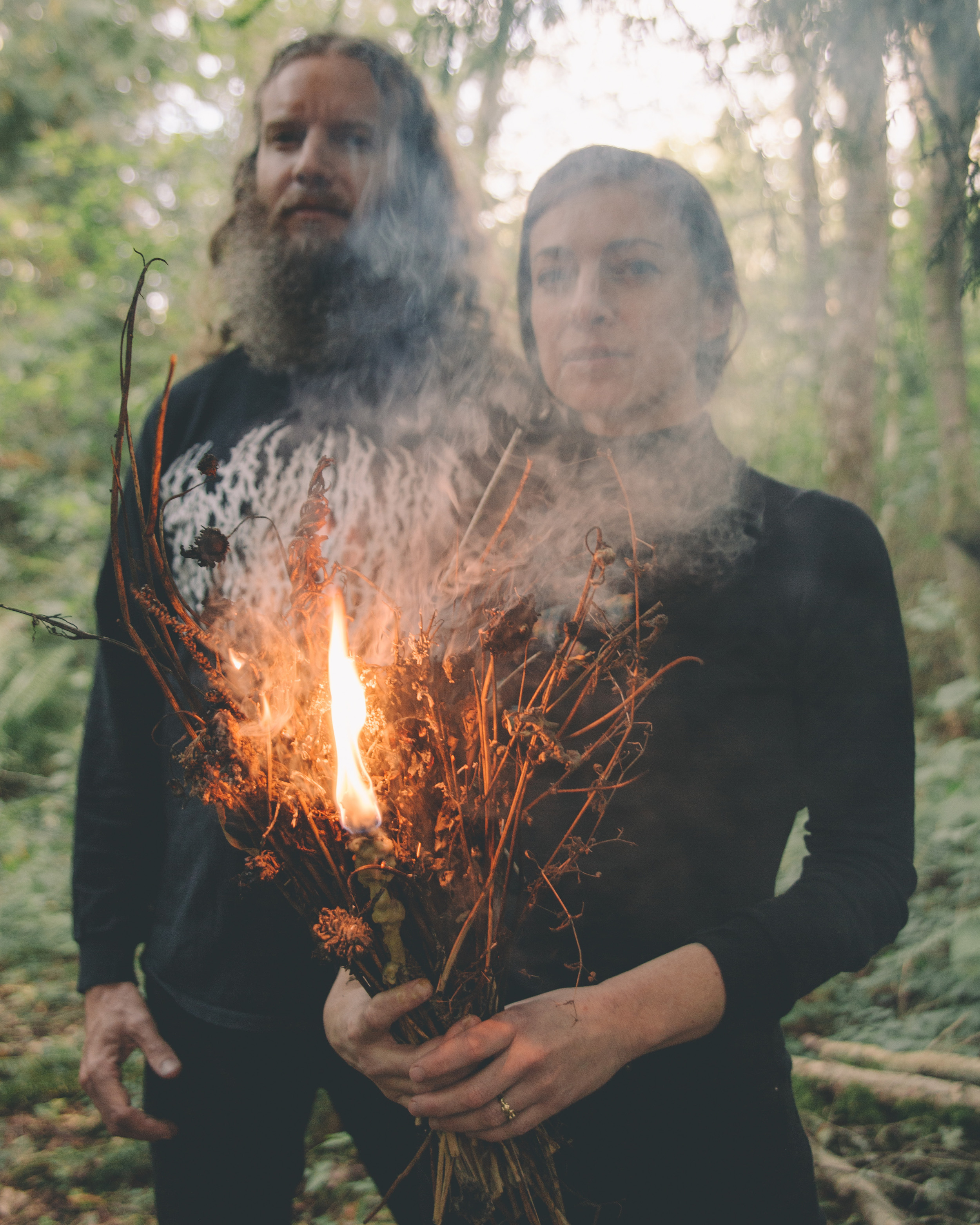 “TO RECEIVE”
The seed is an egg.

This song was originally called “Song to Call a Man.” This is the story about fertility and the visions induced by belief in the self. Confronting woman as a dark mystery, as roots under the ground. The story of dirt / rot / fermentation as the beginning spark of warmth and movement. Spores from ashes, a bulls horns are the plow in the earth. The interrelation of cosmic events, lining up and rearranging star dust and carbon, slow decay begetting life. The erotic as protective amulet, and the mundane and lowly as initiation. What is the mystery of my own power as a woman? Song as incantation, song as magic, a song to call rain.

I was trying to see into the power of women throughout time, and disentangle power from the shame that has been cast over much of women’s empowerment. The fertility goddesses buried in the earth, dig them up to recover the divine mother. “Who is this terrible woman, dark as the sky at midnight?” I had to also see the destroying aspect of woman / goddess, and what comes with the hiding and oppression of women’s power, what happens to the unexamined life, when empowerment cannot be expressed? It can turn against the self and loved ones, and be a terrible gift, inherited down through the family resulting in generational sickness. I felt this song to be a hymn to overthrow generational / conditioned oppression. This song contains my attempts to unite with “goddess” in all her aspects and ward off the evil eye.

Then shall I know also as I am known: “Strong scent, the cock scratching in the garden, gemstones where eyes once beheld, befitting one in fallen time a golden mask, rotting head of the bull, horns Cimarutta…. Choke on inhaled flame, conquer you as I conceive, when she speaks a thousand voices singing, tell me where is your tongue?”

“TWO HANDS TOGETHER”
The egg sprouts / the cell divides.

There is a theme in the construction of the lyrics in this record that I learned from reading Hélène Cixous: borrowing of text and recontextualizing it into another body of writing. This is the story of becoming more than the self, or realizing that the self is many. Within the story is the parallel between baptism with water and birth in water. I wanted to illustrate finding strength in the many or in something larger than the self, reaching out for help — to people, community, words. In a way: surrender. Usually surrender is seen as a sign of defeat, although in this context, and in the context of pregnancy and birth, surrender and vulnerability are absolute strengths. The uterus contracts as waves in an ocean, birth of a child is the re-birth of the self. Being like a child in the water, letting waves wash over you, and the only guide is the heart which carries the oceans pulse in its blood.

I was trying to see “god the father” and how he came to be with his good and also oppressive aspects. In great times of need, you can find strength in strange places! I was raised Lutheran (though I am not Lutheran now), and wanted to draw upon the strengths and archetypes from the lessons of the church, distilling these messages into a positive / personal source of strength, where the voice of god becomes the first breath a baby takes. I wanted to rewrite strength, using the foundations I was given in my youth.

I am the sacrament in the water: “To the treasure of your own heart, devoted may you be.” 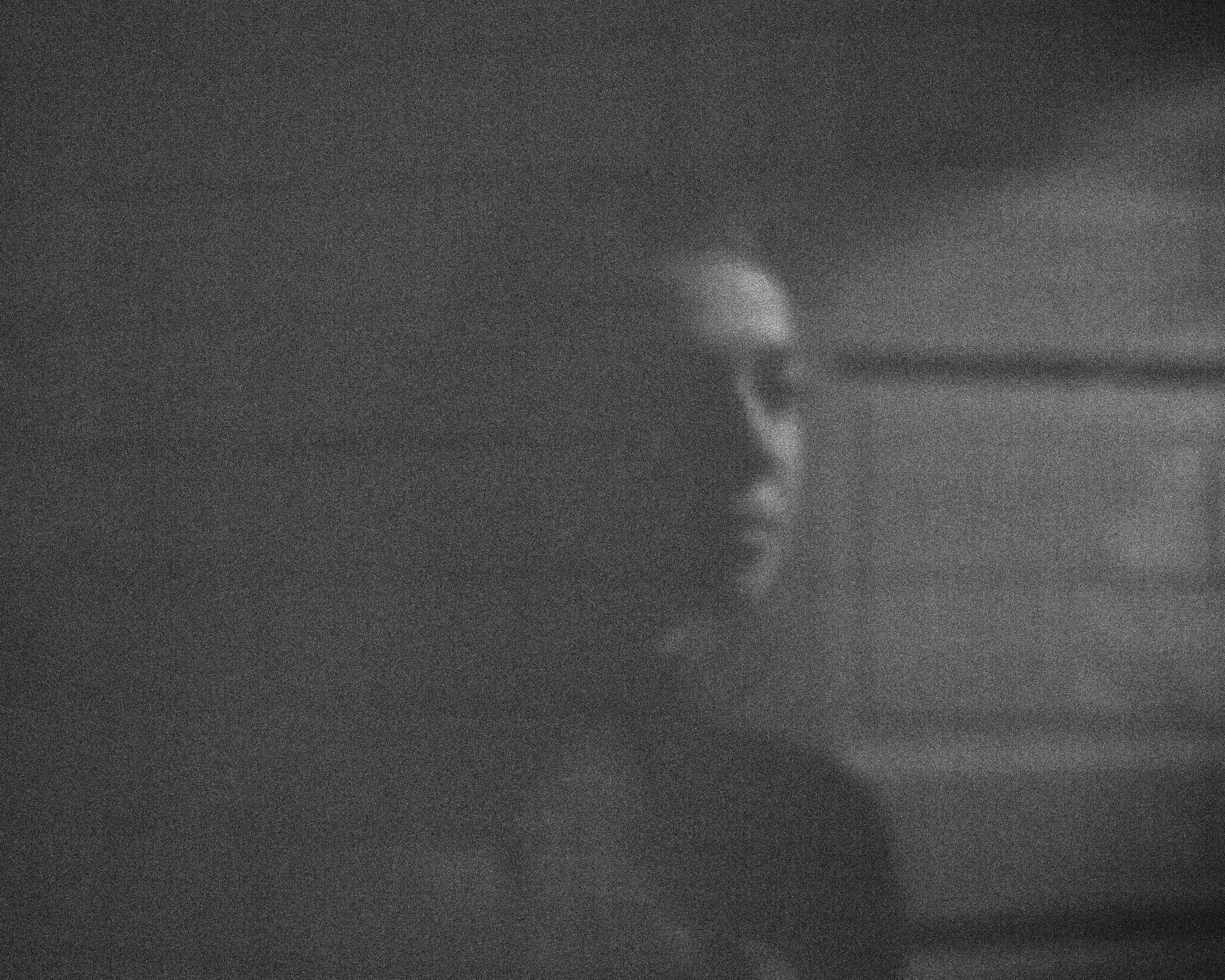 “SO THAT THE HEART MAY BE KNOWN”
Birth / giving life.

This is a song that contains the story of giving birth, and the attending altered states of consciousness. What happens to breath, sound and light. What happens to the people surrounding the birth, and the energy they give. Knowledge in the faces of other women, who have given life before, and what they know in fleeting moments, transferred, a look as old as strata on canyon walls, ancient as caves. Infinity within one short minute. I attempted to relate music only the new mother can hear, colors only new eyes can see.

Layers in time: “How does it feel? What do you know? All Love!”

This story contains a dream about a river of souls, a current eternal, globes of light forever floating upon waves of radiation, carbon molecules dancing in light. I saw in my dream souls in a river. I was wading against the current searching for a particular soul, to see if I recognized in the spheres of light the one I was searching for. Contained in this story is a wish to create a call. One that I’m sure my great great grandmothers knew. A call that my own mother and her mother knew on a surface level. A sound to call a child home, an animal back from pasture.

In this song, I was searching for the sound to call the soul home. I was trying to see into outer space, the light of stars millions of years dead reaches our eyes in a moment. The beginning of our universe and the carbon we are made out of, vibrating as radio waves from erupting stars pass through our bodies. My present sense of time combines with the speed of light. I wanted to find the sound that could save a soul, by calling attention, pulling on a heart string, catching the ear. To give a new life its own voice, so that s/he may know how to use their gift of breath.

Death and life are in the power of the tongue: “Hidden by its own afterglow, the waves pass through me and you, Breath meets matter, as she reaches back in time.”

“ALL THAT IS BEAUTIFUL”
The force of life.

“To be sensual, I think, is to respect and rejoice in the force of life, of life itself, and to be present in all that one does, from the effort of loving to the breaking of bread.” —James Baldwin

This story is dedicated to the celebration of life. It is the end of a journey. Respecting the nature of what you bring into being. I wanted to create a tabernacle to house the thoughts, memories and meditations of where my son came from, and with it a blessing of protection and love. A wish for him to be in good relation to the world around him. To see the humanity in the human, the consciousness in the plant, the wisdom in the rock and mineral, the knowledge in the animal. I was declaring a gift to him, a promise to nurture his inborn self-love, and to give him a good foundation of presence, that can extend to everyone. Maybe other people need to hear this wish also.

Love: “On the exhale of my mother, my father. The fire of this love will hold me until I return.” 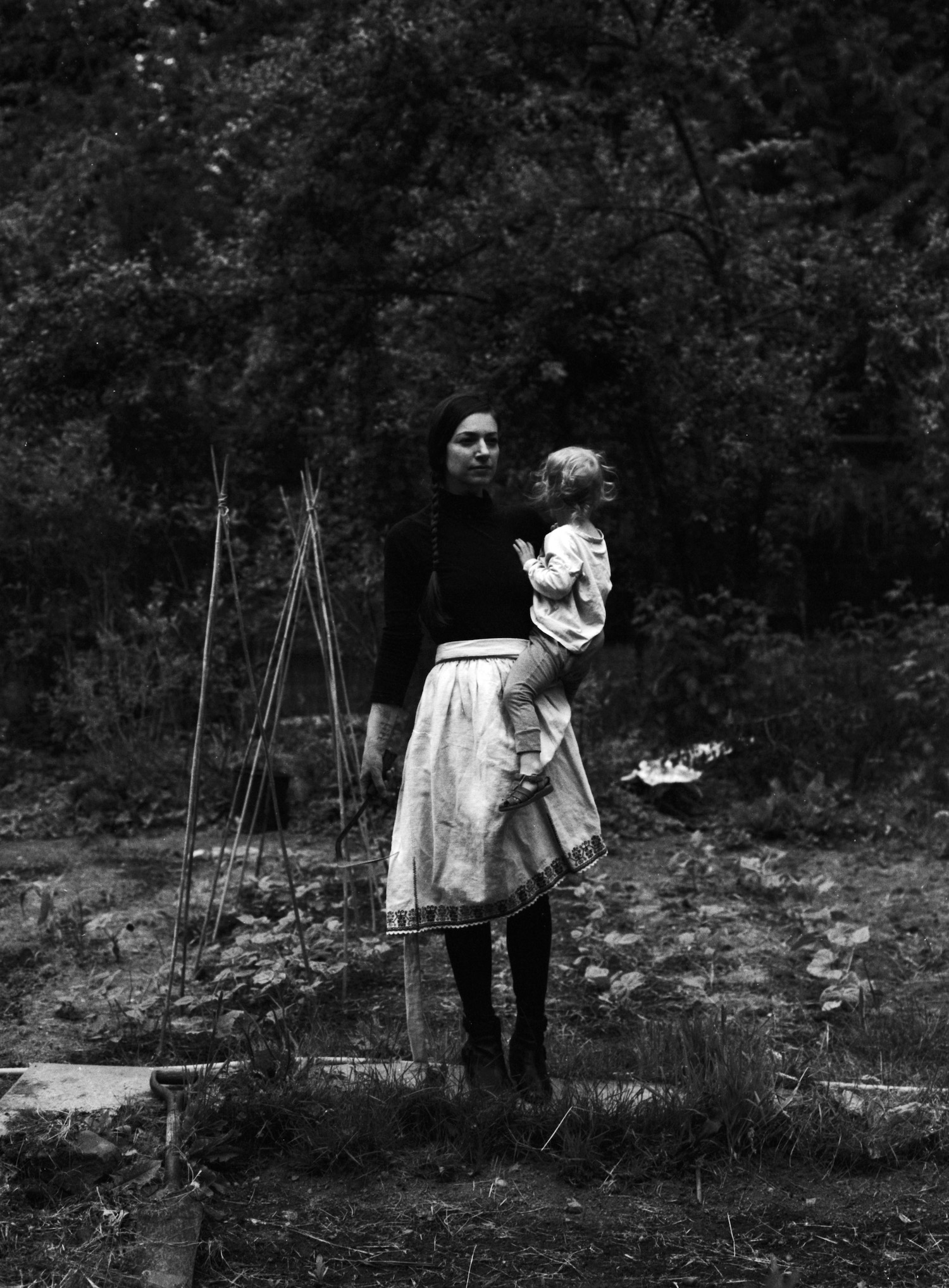