Mark Trecka, Midwife
Share the Stories Behind
Their In / Heaven Split 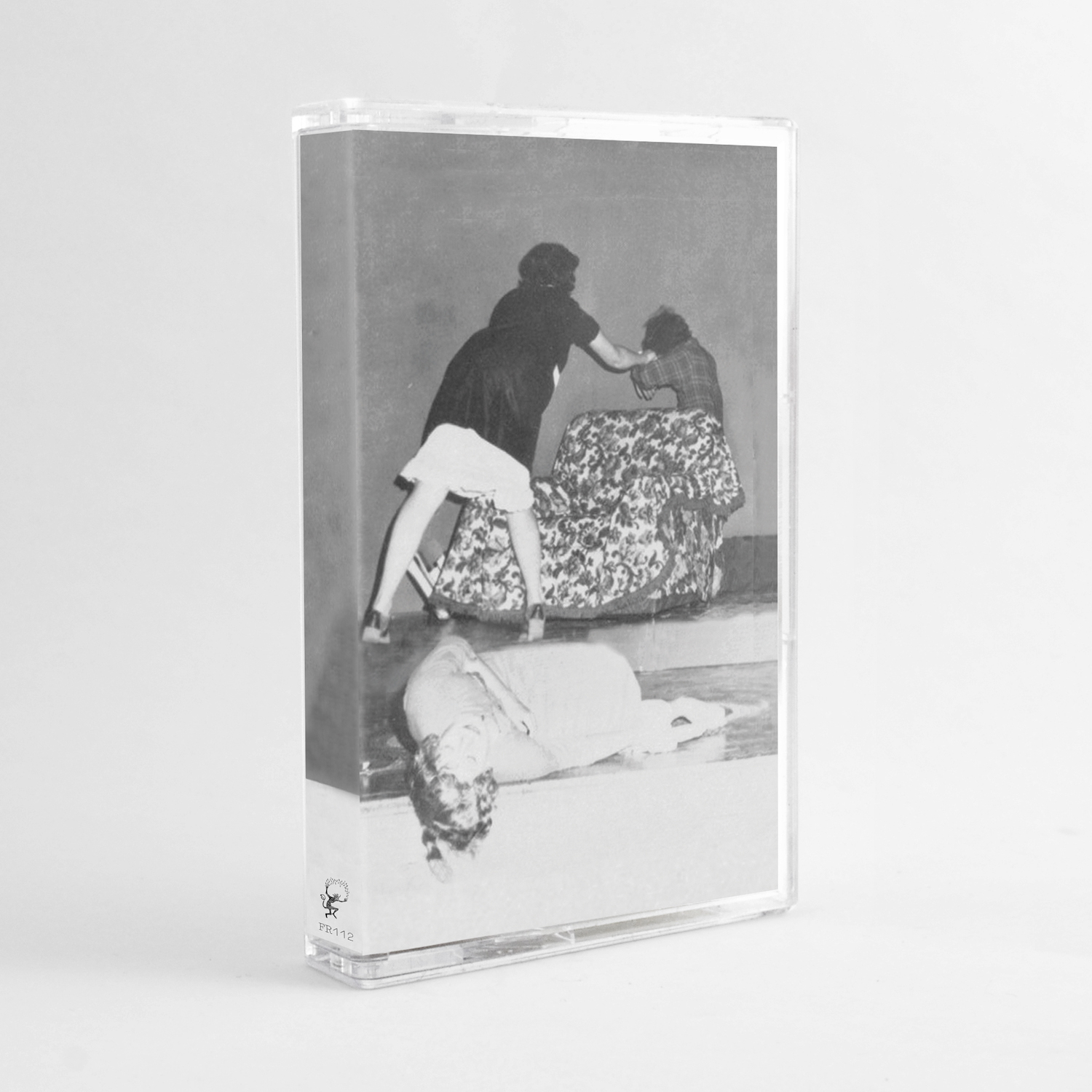 As the year begins to wind down, we’ve started to survey the largely overlooked songs we may have missed the first time around.

Here’s one example: the side-long experiments that make up the In / Heaven split Mark Trecka and Midwife released on Flenser last August. Since they’re difficult to describe in a sentence or two — let alone a paragraph — we asked the Hudson Valley and Denver-based artists to share the stories behind their songs, including a queasy Susan Alcorn collab (the pedal steel-propelled “In Ellipsis Landscapes”) and slowcore-style Amulets duet (“Heaven”)…. 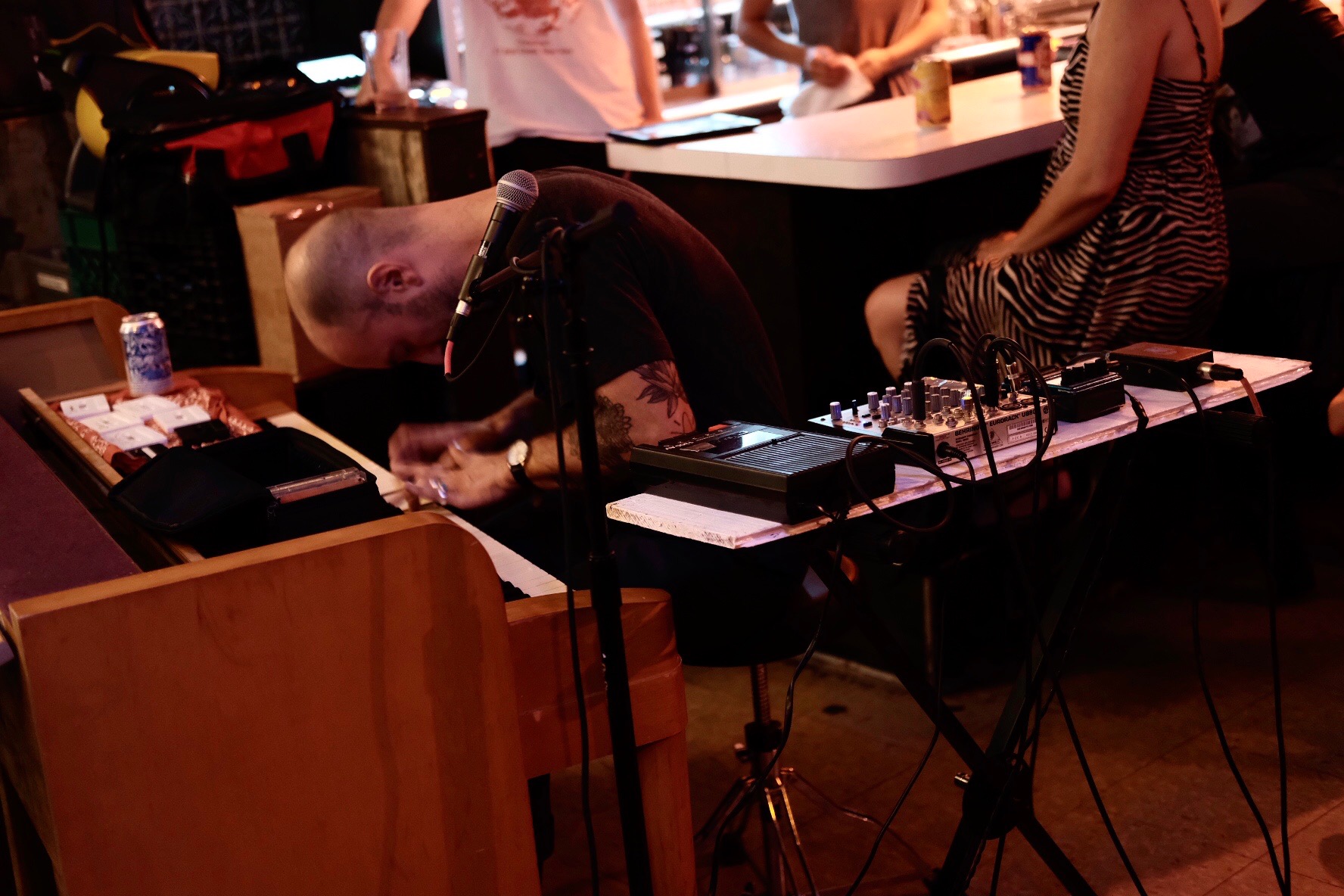 I asked Susan Alcorn to collaborate sometime after we shared a bill in June 2018. The rhythm and timbre of her set that night had the quality of a strange radio broadcast. She gracefully seamed each piece of music, one to the next, quietly introducing each next piece with deeply felt, and sometimes rather long and always captivating stories.

I imagined myself crossing from one place to another — in a car, I guess, or somehow disembodied — and tuning in to this hour of sound and story.

That night, I began to think about Susan, really, as a storyteller, not just because of the literal telling of stories between songs, but because of the pacing, the breaths, even the way the audience listened, rapt.

Susan and I corresponded and sent tracks back and forth throughout the next year.

And through this, I continued to engage an old, but modern idea: the problem of making art that is both abstract and also directly about something. In some of our correspondence about this problem, Susan wrote of performing Oscar Peterson’s “Hymn to Freedom” and songs from the nueva canción canon; she wrote about spending time in Chile with returned exiles and concentration camp survivors.

In the context of live performances, anyway, Susan said to me, “I talk about what our history has been. And people seem to appreciate that.”

Over the course of several months, during this correspondence and collaboration, I became enthralled with the unfolding story of the trial of Scott Warren, the No More Deaths / No Mas Muertes volunteer being prosecuted for providing water and shelter to migrants near the U.S.-Mexico border. I followed along mostly through NMD newsletters and also through Ryan Deveraux’s reporting and Laura Saunders’s photographs in The Intercept, and Liz Kinnamon’s writing in The New Inquiry.

Borders as aporias, borderlands as places of movement choked by militarization and protection fantasies; borders as places of strata, spectra; I had written about these ideas before. But the story of Scott Warren’s trial pointed the public imagination towards a particular dimension of all this.

In criminalizing the most basic humanitarian act of providing water and shelter to folks who had simply potentially crossed the U.S.-Mexico border illegally (after all, Warren did not ask Jose Arnaldo Sacaria-Goday and Kristian Gerardo Perez-Villanueva for their papers before giving them water), the United States (the named plaintiff in the court case) made only the latest in a long history of pushes toward something unthinkable: people seeking refuge, fleeing one state for another are, by virtue of that fact, somehow not worthy of the umbrella of humanity.

And what’s more, individual citizens are implicated in the task of closing that umbrella.

As Liz Kinnamon puts it in a piece for The New Inquiry, “the state is trying to crowdsource the checkpoint. It is trying to make you into the border. It is our job to understand the vicissitudes of boundary lines — to know what they’re for and how they’re used.”

In early August of this year, BORTAC, the most militarized unit of U.S. Customs and Border Protection, raided the No More Deaths / No Mas Muertes humanitarian aid camp in Arivaca, Arizona, prepared as though for war. During the raid, they destroyed supplies, slashed tents, and detained more than thirty migrants who were receiving aid there. As No More Deaths pointed out, the migrants (“illegal aliens”) were then listed on CBP documents as “seized items,” along with cell phones, cash, keys, and books.

CBP also had what appeared to be a professional film crew on hand, documenting the raid.

The certain irony is that while the policies of the State discard and disavow those seeking refuge, this all also revolves around an obsession over them. Rather than meaning whatever they mean (as human beings, as embodied intersections of experiences and relationships), each migrant, each person crossing over becomes a threat, a symbol of the potential “weakening” of some otherwise preserved ideal.

However one feels about national sovereignty, there is no border really. You can’t see it, you can’t trip over it.

“There isn’t only one bad dream”

And so the ellipsis: whether the border itself as the ellipsis which has replaced what a migrant understands to actually be there; something traceable, maybe, but certainly not a solid line. Or, the ellipsis: as the dot-dot-dot markings of the path being taken, like on a map seen from above, in imagination or illustration.

In the landscape, there is passage traced / omitted / bracketed.

Or, the ellipsis: as the recuperation of any of this, after being assaulted by negative fantasies, now given back to the open space of meaning, perhaps meaning as movement, tracing itself; the otherwise empty bracket. Omission as implication, in the name of what would be spoken, or written.

There are other ways of talking about this, of course; other instances. Palestinians know. Chicagoans know. There isn’t only one bad dream. Checkpoints are everywhere crowdsourced.

What happens now is that this writing attends the sound as the sound goes off to trace its own meaning. I want to talk about what our history has been, what it continues to be. There is a wrestling against meaning, even as I hope to make something of this meaning more clear. But if this writing, here, is a story told alongside the sounds presented, it is hopefully in some way less clear than the sounds themselves, or both pursuits have failed. 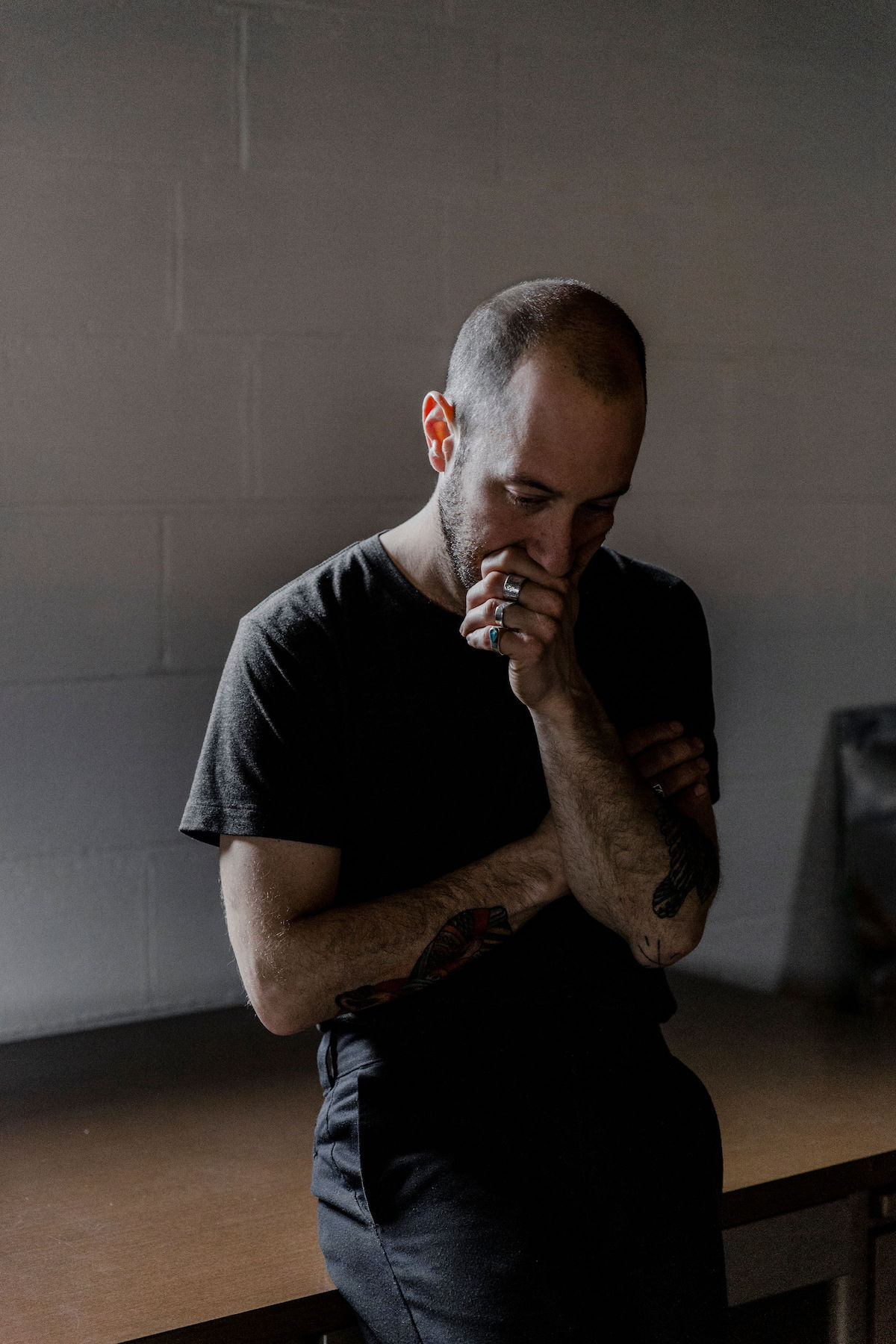 I of course have my own fantasies.

Or, the ellipsis: when I constructed the initial sounds to send to Susan, I left several gaps, spaces of silence. I thought of the piece as a landscape, punctuated by these silences-as-ellipses, moments of implied meaning, hers or mine or yours. I even briefly considered asking Susan to refrain from playing pedal steel guitar, challenging her to instead tell stories in those silences.

This reveals a fantasy. The piece was titled before it became what I above claim that it is about. Again, Kinnamon: “It is our job to understand the vicissitudes of boundary lines—to know what they’re for and how they’re used.”

to cull meaning from tone
and fragment,
deciphering.

Surveilled for tone,
watched where we go
divined, we are its signs
and wonders.

The fact that this work has ultimately found its form as a split release backing Madeline Johnston’s music presents an ever broader synthesis. Having listened to so much of Madeline’s work (once as Sister Grotto), much of it on cassette and in many cases split releases, In / Heaven makes for a kind of intimate manifestation.

Much associated with roads and travel, even in imagination while absent from such roads and travel, again those landscapes come back to be projected or projected into. That I’ve had the good fortune to participate in making one of these artifacts, and that several imaginations have intersected in doing it, seems a kind of staggering (im)possibility. —Mark Trecka 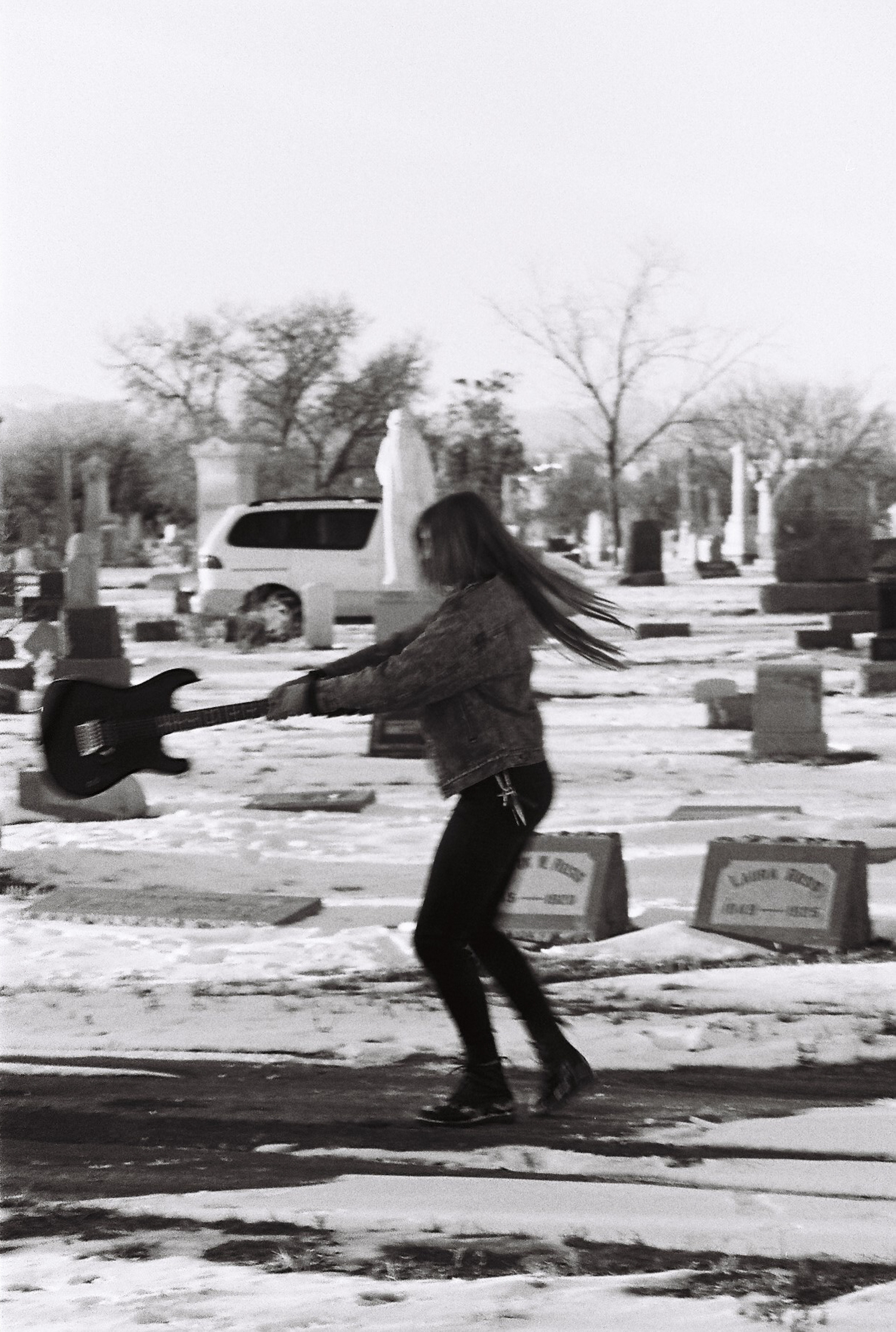 This piece was actually a remake of another long-form song I made for a small run of tour tapes in 2015. The track was then called “Pieta.” At the time, “Pieta” was largely inspired by Mark Trecka’s work with Pillars and Tongues. I was very moved by their imagery about religion, landscape, and spirit, as well as sonic elements like working in long-form structures and meditative repetition.

Pillars and Tongues was a huge inspiration on my old ambient project, Sister Grotto. Releasing the split with Mark this year made it all come full circle for me and is truly, truly an honor.

I came back around to Pieta at the end of 2018, which was a very dark, death ridden year for me. I made the track “Heaven” as a prologue to my Midwife record Forever. 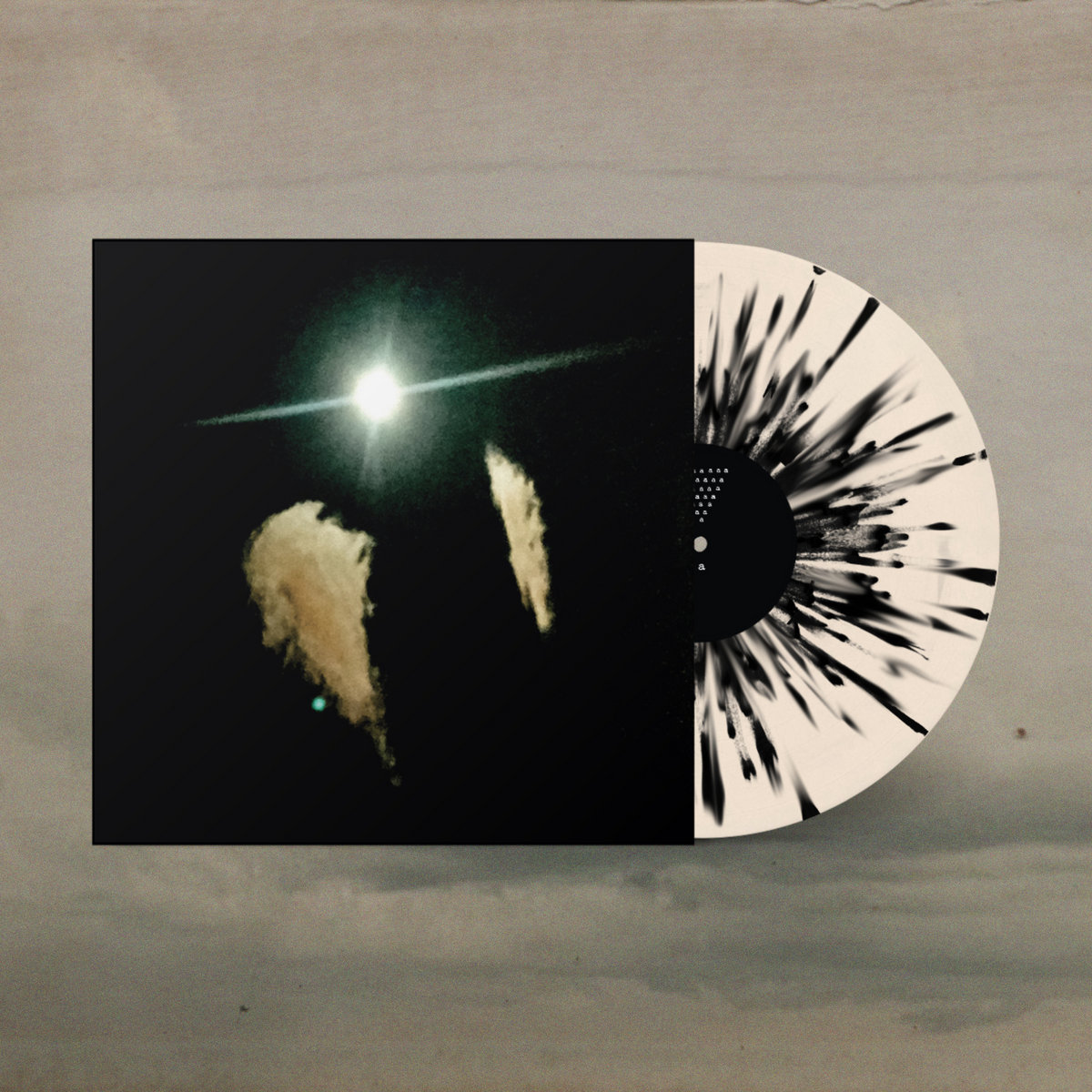 Heaven is about having the will to live, survival instinct vs. Thanatos, a death instinct or death drive. Freud proposed that “The goal of all life is death.”

I was thinking about the idea of “Heaven on Earth,” which was tagged with spray paint in the warehouse where I lived with Colin. Right next to our giant mural that read “Ready to Die.” What are we supposed to do with all of this? How do we navigate our experience? Is the goal of all life to die, or is the goal to live like we live in heaven?

Your ending action,
and its outcome.

A remastered double LP reissue of Midwife’s debut album, ‘Like Author, Like Daughter’, is due out through Flenser on January 22nd. Stream it in full below, along with a few other selections from both artists’ back catalogues. 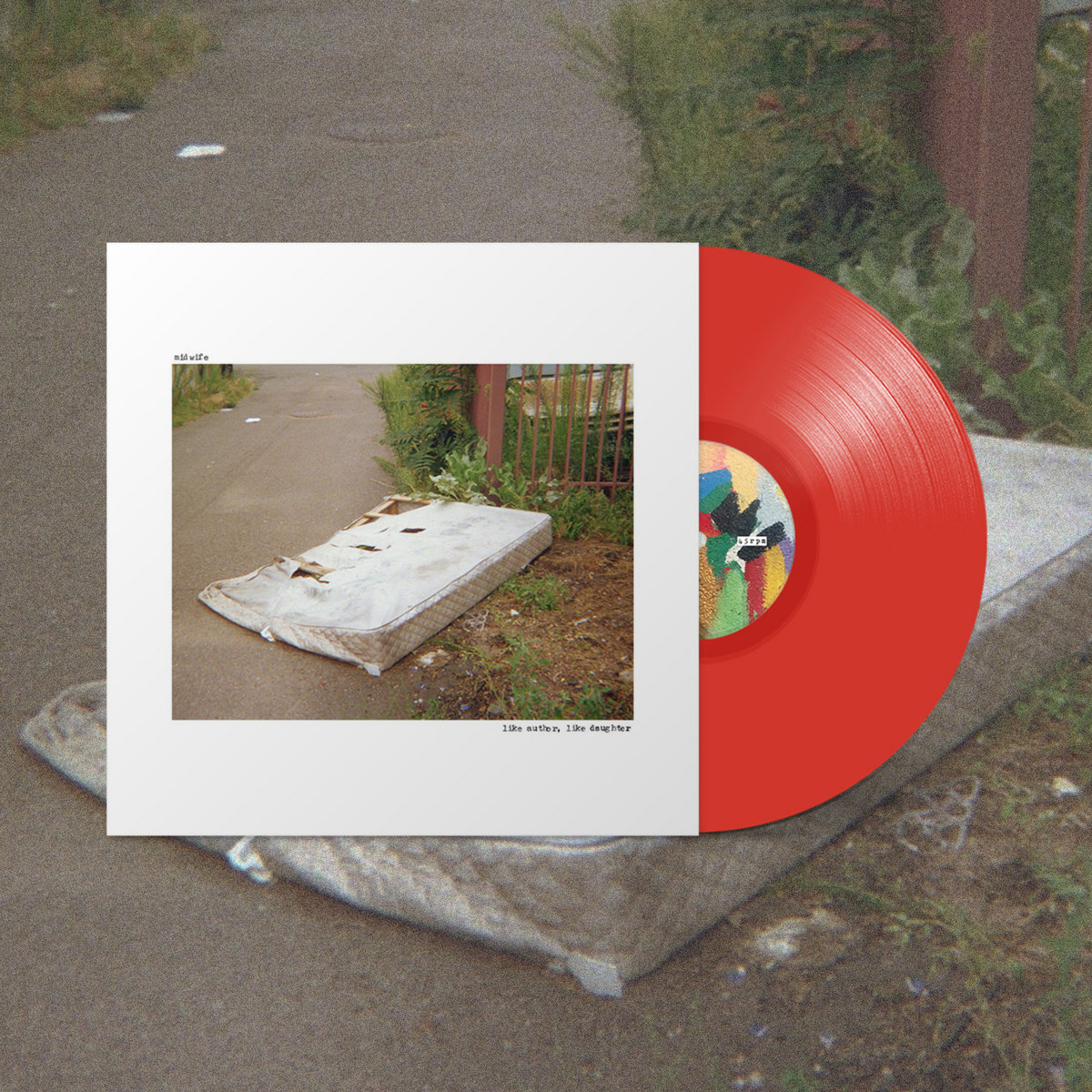 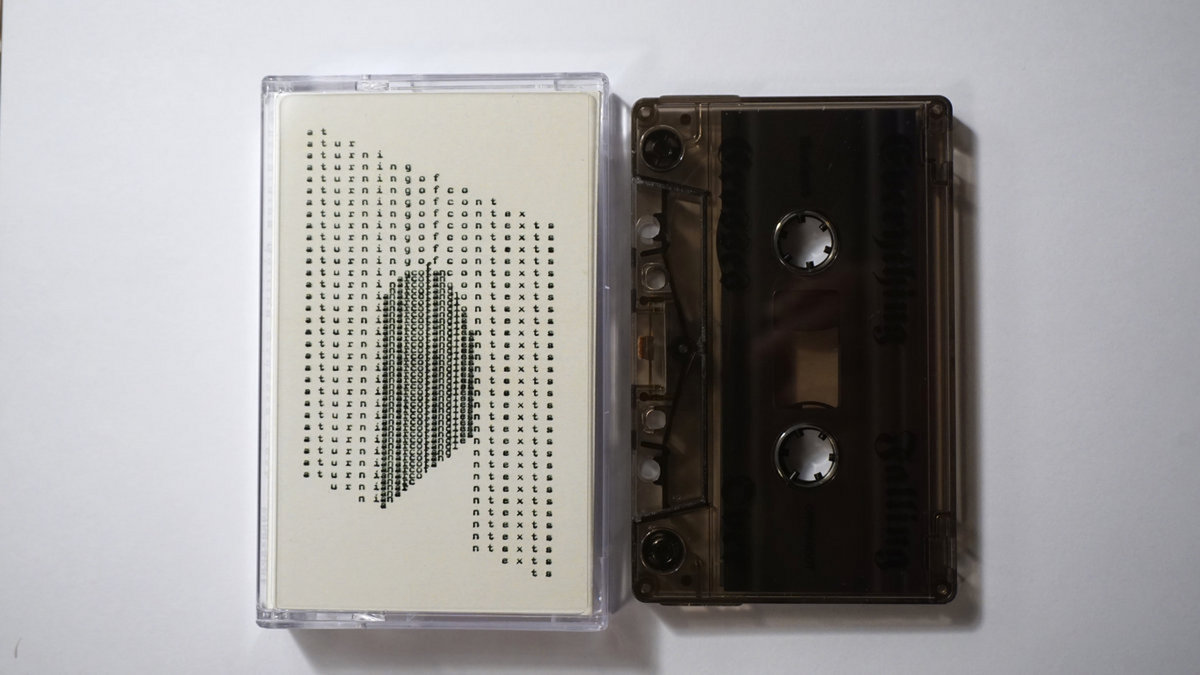