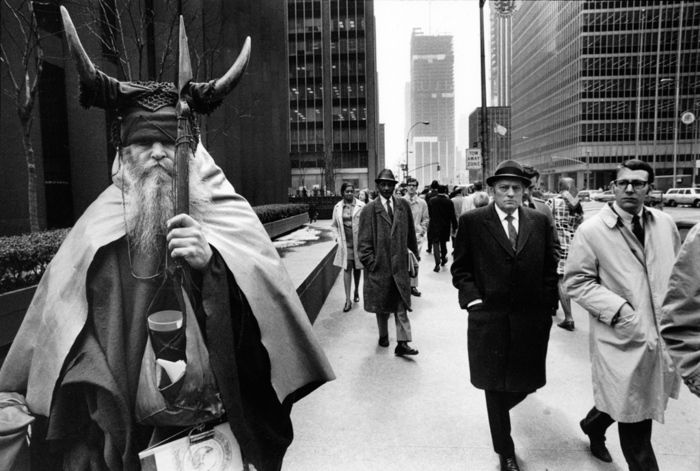 Look, we get it—you’re all sick of hearing about crowd-funding campaigns. Here’s one worth pushing right past its goal, however: The Viking of 6th Avenue, a long overdue documentary on the one and only Moondog. While it’s received the support of everyone from Jarvis Cocker to the BBC’s Radio 6 station, the film is still more than $15,000 away from reaching its goal, with 20 hours to go.

Born and raised in the American Midwest, Louis Hardin lost his eyesight at sixteen and studied music at the Iowa School for the Blind. Arriving alone in New York City in 1943, over the next three decades Hardin reinvented himself as Moondog and perfected the striking Viking persona and unique musical style that would make him famous. Moondog’s remarkable life spans much of the 20th century and takes him from Black Foot ceremonies in Idaho to living homeless on the streets of New York to being honored by European royalty. His unique musical career has Moondog appearing with Salvador Dali, recording a children’s album with Julie Andrews, conducting Johnny Carson’s orchestra and performing across Europe with Goldfrapp’s Will Gregory.

Opening with Moondog’s arrival in New York, THE VIKING OF 6TH AVENUE unravels with the drama of a fiction film. Visually rich, it weaves back and forth in time, mixing cinematic contemporary footage with a wealth of never-seen-before archival materials. With audio recordings from more than 20 hours of rare interviews, Moondog’s voice is the personal narrative backbone of the film. His wide range of music provides the soundtrack, using both original and new versions of his works, from orchestral pieces to pop songs.

With Moondog’s spellbinding story at its core, THE VIKING OF SIXTH AVENUE looks at what drew so many to Moondog, during his lifetime and to this day. It goes beyond the spectacle of Moondog as the Viking to uncover the motivations of a man determined not only to create original music but to live a truly original life.

And here’s what really matters: the man’s music, along with a trailer and testimonials from Blondie, Cocker, and Jim Sclavunos of Nick Cave’s band The Bad Seeds…