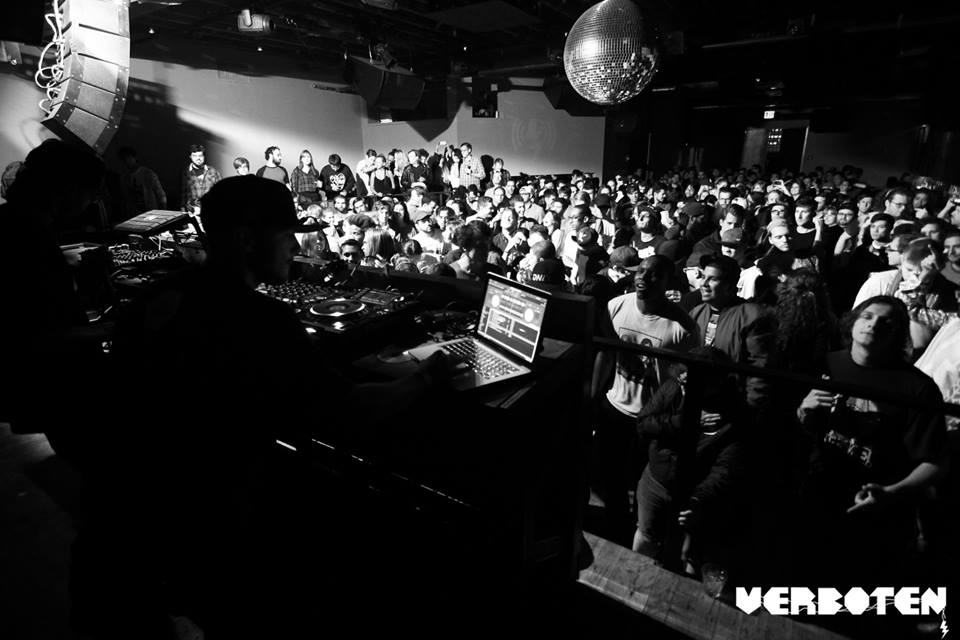 As Hyperdub winds its 10th anniversary tour down with stops in San Francisco, Vancouver, Seattle and LA (now featuring DJ Earl!) this week, we’ve asked one of the label’s recent signings—Taso, a secret weapon in Chicago’s ascendant Teklife crew—to share a crash course on his emergent sound in mix form. Scroll all the way down for that set, and read on for Taso’s thoughts on everything from the loss of DJ Rashad to the steady rise of footwork. Not to mention news of a secret Hyperdub comp that’s due out later this year…

How did you first get involved with the Teklife crew and how would you describe the sound and DJ style you brought to it?
I first got involved with the crew back in 2012 after meeting Spinn in San Francisco at a show he played with DJ Assault. We kicked it after his set and chopped it up for a while over a trippy stick. I told him that I was into production as well and that I had a studio down the street. Next
day we were in the studio straight up. Couple months later Spinn came back again for another show and Rashad was with him this time. After that—as they say—was history. Being a part of Teklife and getting to work with Rashad and Spinn have been the biggest blessings in my life. I learned a lot from them and I still am all the time.

What I bring to the table is an amalgamation of all the sounds and styles that I love and grew up with, fused together at 160bpm. I have been consistently refining and mastering my technique everyday for a long time now and I hope as time passes, more and more people will dig it. From the ’90s east coast golden era throwback classics to the heavy west coast influences, it all stems from my love and respect for the South Side Chicago sound.

Let’s say someone isn’t that familiar with Teklife’s various members. How would you describe what everyone brings to the crew on both a creative and personal level?
Everyone brings the heat in an original and individual way. If not, we make fun of them until they do. But in all seriousness, everyday we’re all getting better at what we do, so there’s no telling what’s to come with all this creativity.

People outside Chicago often associate Teklife with footwork. What are some artists, records, etc. outside that style of music that have influenced your own productions over the past year?
Hyperdub crew
Deep Medi crew
Tempa crew
Machinedrum
Night Slugs crew
DJ Marfox and the whole Lisbon crew
Freddie Gibbs and Madlib
Just about every Curren$y mixtape that’s on my iPhone
Aphex Twin’s Syro!

Too many to name for real, but I gotta send a quick shout out to my LA homies getting it in on the daily—MIMO BRICKS SWOOPS. Mad love for those fools.

How about some non-musical influences?
Since I was a kid I always looked up to Michael Jordan, the Rat Pack, Humphrey Bogart, Al Pacino, Robert De Niro, Christopher Walken… cats like that.

As for how footwork has evolved over the past few years, how would you describe its current sound? Does it feel like it may hit a wall soon creatively as more people outside Chicago adopt it in their own sets and productions?
Footwork’s current sound is ever-changing still. There are so many producers and not just one sound or style. I think that’s what’s going to help with the longevity of the art and culture—there is no
formula or script to go off. You can easily tell someone who is greasin’ tracks and biting other people’s shit. The name of the game is originality, and if that’s not for you, then neither is this style of underground music.

“Honoring his legacy isn’t pressure to us; it’s a reason to live life that much harder”

What’s your musical background in general? What other projects have you been involved with over the years outside of your own solo work as Taso?
I have been playing eight instruments for the greater half of my life. I started making beats on the computer when I was 12 years old and I’m 26 now. Some of the other projects I have been featured on were Rashad’s classic Double Cup. I worked a lot with my boys Truth from New Zealand; we released on Tempa, Deep Medi and Firepower since then. And low key, I have done a good amount of ghost producing and ghostwriting but I can’t say much more than that.

Where did you go for audio engineering? Did you feel like you needed to learn the technical side of music to take your work to another level?
I went to Expression College for Digital Arts and I graduated with a bachelor’s degree in audio engineering and sound design. I definitely feel like it helped me gain the knowledge, tools and
foundation to be the producer/engineer I am today. No doubt about it.

You’re playing back to back with DJ Spinn on this Hyperdub tour, which is a role DJ Rashad has played in the past. How would you describe Rashad to people who never got the chance to know him? And does the pressure of honoring his legacy haunt everything Teklife does to some degree?
Rashad is the god. Period point blank. The originator and mastermind… and also one of my best friends. Honoring his legacy isn’t pressure to us; it’s a reason to live life that much harder. It’s a reason to create the best tracks we can and perform them to the best of our ability and it’s also the fire that keeps us lit up all the time. RIP Rashad Harden… Miss you fam…

Tell us a little bit about the mix you made and your plans for the rest of the year.
The mix has a bunch of new tracks and the classics; there’s something in there for everyone. Just sit back and light a big fat joint up—or whatever your music ritual is—and enjoy. The year is almost done but we got the first ever Teklife compilation on Hyperdub coming out in a few months and we are all very excited to share it with the world. I heard all the tracks already; this comp is gonna be coldddddddddddd. Peaceeee…