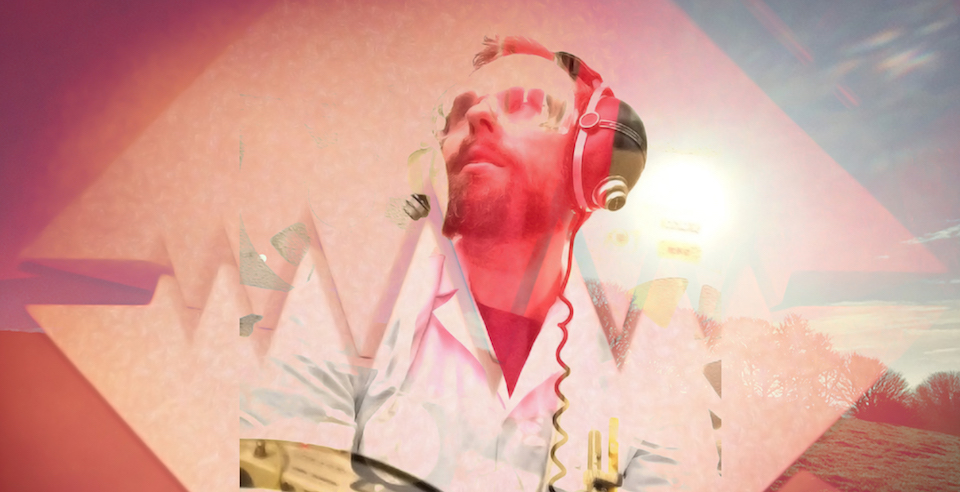 We first stumbled upon Matt Saunders’ Assembled Minds project through a few like-minded sources, including Energy Flash expert Simon Reynolds, fellow producer Robin the Fog, and the home of all things hauntological, Ghost Box Records. Reynolds’ Blogspot review put its appeal perfectly: “When Assembled Minds’s Creaking Haze & Other Rave Ghosts came through the mail around the start of the year, I confess my initial reaction was to feel a little catered to. The coordinates (hauntology + rave nostalgia) felt a wee bit bang-on-the-nose in terms of an appeal to my niche demographic. But then I gave it a play… and it turned out to be great. And differently great—nothing like Burial or Caretaker, or all the revenant-jungle I’ve been posting.”

Given Saunders’ past life as part of the largely overlooked 4AD duo Magnétophone, and the main subject of his solo material—hanging onto the collective threads of parties long past—we thought we’d ask the Patterned Air founder to channel muddled late-night memories into one rave-on mix…

Orange Lemon — “Dreams of Santa Anna” (1988)
Todd Terry pulled off something really quite special with this track, bearing in mind it’s house music, and made from a series of seemingly disconnected sections that shouldn’t fit together, but somehow do. It takes you on a journey through cut-and-splice C64-esque theme tunes, British library music, hip-hop, funk horns, and weird bugged-out melodies, whilst still masquerading as a house record. A disjointed piece of magpie-hauntology, conjured before anyone else knew you could.

Ultraviolet — “Kites” (1990)
I’m a sucker for a disembodied, transparent, hazy vocal, floating and refracting through a song, and “Kites” is full of it. The opening string/chime riff takes the basic rave-piano and simmers it into something beautiful and vaporous and the whole thing is earthed by a rolling hardcore breakbeat, wrought for stirring up the fog. To me this track is both empty city streets, and early morning hanging-mists in a rave-field.

Sonz of a Loop da Loop Era — ‘Far Out’ (1990)
So, nothing intangible about this; it’s straight-ahead breakbeat house with soul and turntablism skillz. That piano is in a million rave tracks—heard a million times in a million clubs and fields—but somehow, this track makes it sound like it never existed before. It’s about feelgood nights, getting high, getting loved, dancing for your life—all distilled into one exciting, life affirming blaze of happy cool.

Assembled Minds — “The Face in the Mirror is Not Mine” (2016)
There are moments when you’re in a large gathering of like-minded people, amongst the old tribe, when the rest of the world sinks away and your focus becomes entirely that moment, that beat, that snare, that dance step. It’s mindfulness plugged into the very old part of our brains, ancient memories of performing these group rituals when they would have helped us stay alive. And in that state, everything around you happens in slow motion and you wish the moment could extend forever. Of course, it doesn’t, the music ends, the trip home needs to be negotiated, something bad will probably happen at some point, but that’s okay, that’s life, it’s been a bosting night. There will be other slow dances to be had, at 160 BPM.

Liquid — “Liquid is Liquid” (2009)
Rewinding a little to 2009, with Liquid’s minimal techno workout “Liquid is Liquid.” It’s the eerie, darkly exotic feel that I love in this track—more about creating a worrying, disconcerting atmosphere than it is about creating a straight-ahead dancefloor track. And yet at the same time, it’s perfect for inducing involuntary, fevered wild dancing—old and forgotten, decayed and distant.

Sweet Exorcist — “Testone” (1989)
An early Warp record this one. Simple and bleepy—cowbells, claps and plastic percussion. Another record that sounds likes it’s taking us on a journey to somewhere we’re not sure we’re going to like much. It’s the sound of earnestly getting absorbed in the music coming through your headphones, blanking out the drunk bastards on the bus looking for any reason to start some argy-bargy. I love the melody towards the end of the track that slinks in like the glimmer of a cold rising sun, the slow release of pent-up bad-time tension.

Tronikhouse — “Uptempo” (1991)
From Kevin Saunderson’s Hardcore Techno EP, “Uptempo” is all deep-frowning bass, ardkore breakbeats and Beltram-hoovers before drum ‘n’ bass pretended it invented them. Whether through a club system, field PA, or headphones, it makes you feel like you’re on a mission to get somewhere important, whether physically or psychedelically mental. It makes you feel immortal, invincible, like you’re both the lord and lady of the dance, or at least you’ve just scored the best high imaginable. It’s hard-hitting, super cool, and a private clarion call to (dance-) action amongst your mates.

M-D-Emm — “Get Angelic” (1988)
An acid reanimation of Kraftwerk’s DNA. Or at least let’s say Kraftwerk, if Kraftwerk were sugar-gorging-attention-deficit-kids, flitting from one fast-unraveling noise idea to the next. Nothing touches the sides in this track, one second you’re chasing flying dragons, the next, staring at your feet wondering why you’re missing a trainer. And then frenetic turntablism. And then vocalism. And the track’s finished. Or started. Or in the middle. Hard to tell. Got any rhubard-and-custards anyone?

Dopplereffekt — “Higgs-Mechanism” (2003)
The sound of every chill-out-room or dim-lit-moody-catacomb everywhere. It’s that moment in the club when everyone and everything around you dissolves into a rainy windscreen of rivulets and windblown-rivers, and you become able to see the music, clearly, like light, and it’s an opening portal, blazing and sparking, and you’re walking into it, like the universe became a single point of clear and comprehensible ideas, and the highest high you’d previously known has passed by into your mind’s rearview mirror, and you’re checking out of the night into a kind of perfect, hot-cold ecstasy, the likes of which you’ll never be able to forget, but will chase and hanker after, for always.