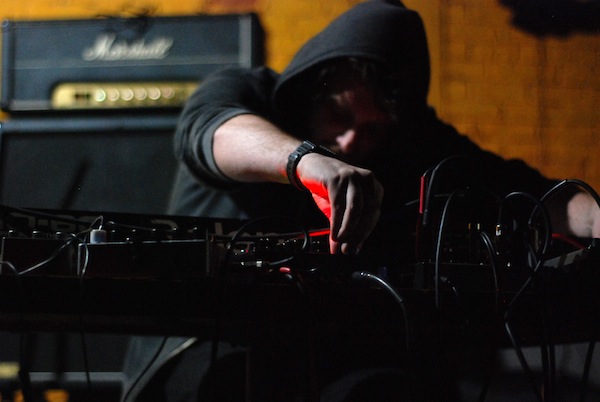 Daniel Lopatin is a bit of a sneaky bastard. At least he is on the new Oneohtrix Point Never album (Returnal

, out 6/22 on Editions Mego), a mesmerizing set that’s sparked with sheets of noise and chased with cumulonimbus chords. In other words, it quickly shifts from a fatal speaker stabbing  to the kind of thing you’ll want to hear with headphones on, preferably on a patch of grass during the warm summer months ahead. To expand on how elusive Lopatin is musically, we asked him to submit a special Needle Exchange mix (his alternate title: REAL SHIT / I AM YOUR DRIVER -7%%%%% VOL. I). If you’re into twisted techno, library music, the Beverly Hills Cop soundtrack and, err, Rush, it’s definitely an essential download.

Demdike Stare – Trapped Dervish (edit)
Jordan Redaelli (of CoConuts) sent this to me a while ago and I hadn’t really wrapped my head around how good it was until recently. Austere techno production vs. Middle Eastern vibes…if ECM had any bananas they’d be putting out records like this. I used just a bit of it to lead into some Faltermeyer, but I’m pretty heavy-into the whole Symbiosis record.

Harold Faltermeyer – The Discovery
This is the OTHER jammer from Beverly Hills Cop. Almost has a Carpenter-style spaghetti cop movie vibe to it. Carpenter would have put harmonica on it, though, and it woulda been more lo-fi. I like that it doesn’t really have a dancefloor MIDI vibe but is still brutally funky.

Asmus Tietchens – Wein Aus Wien
Asmus invents coldwave! Even if he didn’t, he did.

AG Geige – Gesichter
I’m not sure I know too much about AG Geige; probably found this on Mutant Sounds in 2007. I like all the drill sounds and slashy avant guitars over digital marimba. Sounds like root canals with PBS on in the background.

Claude Larson – Data Flow
Claude Larson is one of those iconic library record synth dudes. Steve Hauschildt (of Emeralds) sent me Digital Landscapes and I got super into it. You can really tell Claude has a taste for the finer things and isn’t afraid to be an emotional man in the world.

Alex Cima – Disconcerto
Kind of in the same vein as Larson. Can you believe this was on Polydor? Mind you that this came out a full year before The Age Of Plastic (Buggles). Everyone was going nuts for these sci-fi pop suite type albums. “Dancing in space is fun” is kind of the ultimate least-common-denominator thing you can say about space travel. I prefer it to “I’m watching the proles on parade” or whatever.

Axxess – Dancing Shadows
Another Mutant Sounds find. Has a distinctly Peter Baumann flavor to it. I love all the transposing.

Rush – Time Stand Still
I like to lie and tell people Kate Bush sings on the chorus. Geddy Lee’s Ayn Rand obsession is so creepy.

Cleaners From Venus – Drowning Butterflies
Taylor (Richardson, Human Teenager/Infinity Window) got me hooked on the whole Martin Newell/Cleaners From Mars axis. I am a Robyn Hitchcock fan, and perhaps more generally an ’80s jangle power-pop fan. So this wasn’t a far stretch for me, but there’s something so much more rewarding about Martin’s lyrics and arrangements. It’s just bursting with everything he’s got. Sorry about the vinyl skip.

Autechre – See on See
My favorite cut from Oversteps. I like that fine line between dissonance and harmony that Autechre plays with. I don’t even know if they are like “trained musicians” or not (I’m not), but there’s a heavy serialist vibe to their sound that appeals to me. Also I like the super pure digi synth drift they get on this track. Sounds like an old Wavestation patch or something like that. Tasteful.

Jim Ferraro – On Air (edit)
This is James’ new jam–Olde English Spelling Bee is putting this out. 808 State-style tropical asymmetry in your face.

Previous I WAS THERE: PiL Put Sex Pistols Fans In Their Place With an Endless Set of Post-Punk Classics At Music Hall of Williamsburg
Next NOW PLAYING: Woven Bones, ‘In and Out and Back Again’