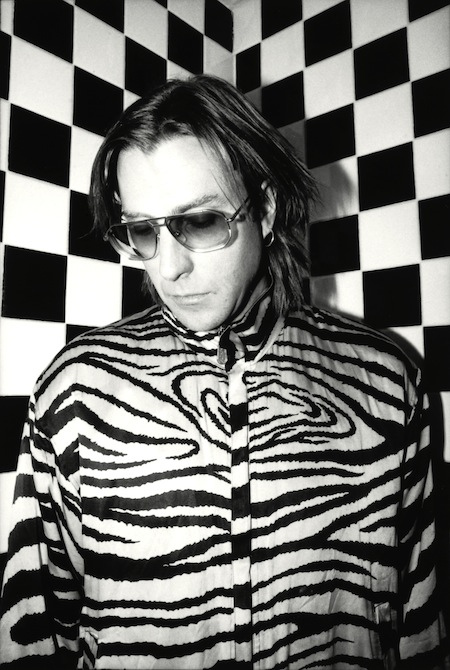 The Wierd Party at Home Sweet Home every Wednesday has been frozen hot and rockin’ the past year, so let me start by saying thank you to everyone who’s kept our fragile ship afloat!

Over the past few months, I’ve found the deliriously-exhausting demands of the four-on-the-packed-dance floor beat week after week leading me back to the flip side of the Cold Waves and Minimal Electronics compilation I recently organized with Joe Daniels of Angular Recording Co. in London. And that is the rich history of down and mid-tempo melancholic minimal synth songs; call it “Warm Waves and Maximal Electronics,” if you will. This mix was very much the sound of the Wierd Party in its earliest days, when it was just a handful of close friends sitting around the Southside Lounge in Brooklyn, playing our favorite long-forgotten records late into the night. Unlike the frenzied electro-punk spirit in Europe’s great minimal electronic groups, a profoundly visual, dramatic and radically psychedelic world opens up when the BPMs slow down. I have always thought it to be a long-overlooked missing piece in the historical puzzle connecting German electronic music from the ’60s and ’70s to trance, acid techno, trip hop and many of the moody electronic textures that arose in the UK and New York later in the ’90s.

Anyway, without VRurther adieu…whip yourself up an eminently stiff cocktail, and enjoy the evening air and the cold sounds of the Wierd world!

ADN’ Ckrystall – Tam Tam Samba
Okay kiddies, we’ll start this cold and Very Rare journey off on a lysergically ‘happy’ note with a gem from the great French minimal synth master Erick Moncollin. He began recording way back in 1977, deep in the South of France, and is responsible for one of of the truly great, psychedelic European electronic records of the ’80s (1982’s Jazz Mad).

Who is this mysterious, troublemaking jester “Mr. Tam Tam Samba,” dancing around in the skies over Toulouse? I’d say god only knows, but I’m quite certain Erick knows more than he does.

Die Form – Love with Animal
Philippe Fichot was always a beacon of hope for me as a teenager (along with the likes of Jean-Pierre Turmel, Hermann Nitsch and a young Genesis P-Orridge) for the final dissolution of the super-ego in electronic music and performance art. In this little pleasure-seeking leatherman classic off Fichot’s debut LP, Die Puppe, he indulges his lustiest hedonistic fetishes.

Mark Lane – Tzar
Mark was one of the great early minimal electronic artists I had the pleasure of meeting at the Wierd Festival in L.A. last November. The incredibly rich, visceral synth textures that rain down throughout this killer mid-tempo classic are like a massive analogue tornado, swirling around your head and wreaking havoc on the cowering mind inside.

18:e Oktober – Kontrollerade OmstÃ¤ndigheter
By far the most important Swedish minimal electronic artist from the second half of the ’80s, 18:e Oktober released five flawless K7s (cassettes reissued on BÃ¶rft‘s excellent Kulturvetarnas Kongress compilation in 2007). Tor Sigvardon’s one-man recordings have always had a handmade feel to me, with every organic sound carefully considered and barely held together by the brittle plastic rectangle that encased it long ago.

Shoc Corridor – A Blind Sign
Shoc Corridor–along with acts like Neural Circus and Das Kabinette–were one of the first London-based minimal synth groups that existed very much apart from the commercial sound and look of early new-wave music. This one has always been a 4 a.m. favorite at our Wierd party, and its complex structure is quite epic, building ever-so-slowly into an emotionally explosive climax.

Borghesia – NoÄne Å etnje
Taken from the the blood red vinyl LP Ljubav Je ‘Hladnija Od Smrti (Love is Colder than Death), this track is truly a Slovenian gloom-wave masterpiece. As with the best Vague Froide bands in France, the brooding echoes of the otherworldly vocals ebb and flow though the mix like an instrument that’s summoning up the bleak, cold expanses of the dusty Eastern European tundra.

Ceramic Hello – Footsteps in the Fog
Along with the likes of Rational Youth’s Cold War Night Life LP from 1981, Brett Wickens and his Ontario-based group’s The Absence of a Canary album is one of the decade’s great Canadian electronic records. Highly eccentric, intimate, and with an almost playful, poetic delirium somewhere between Soft Cell and mid-period Residents or Tuxedomoon, the foggy title of this one pretty much nails it.

Bal ParÃ© – Metamorphose
One of the godfathers of German minimal electronic music and the Neue Deutsche Welle from Hamburg who is still very active today, Bal ParÃ© is one of Matthias Schuster’s many great projects, which also include Geisterfahrer, In Namen des Volkes, and Das Institut. This is the title track off off Bal ParÃ©’s second LP. Much like Nine Circles, Coldreams, and Isolation Ward, the delicate female vocals carefully play off of the blinding drum machine beats and never get old.

Edward Ka-Spel – The Shadow Box
This is the chilling opening track off of the British electronic sorcerer’s amazing solo effort, Khataclimici China Doll. As in every creepy, crawly track by the Prophet Ka-Spel, a melancholic vista opens up into a limitless expanse–one you can barely follow. The first 10 seconds might be my favorite dream fantasy ringtone of all time.

Trisomie 21 – Il Se Noie
This is the 12-inch version of a track by the French band that was an important link between the minimal synth scene and the early EBM (Electronic Body Music) sound that arose in Belgium later in the decade. Written and performed by a pair of brothers, Philippe and Herve Lomprez, it perfectly describes the choreographed cabaret feel that was very specific to French cold-wave music and electronic punk in the mid-’80s. (See also: Opera Multi Steel, Berurier Noir, Candidate, and Baroque Bordello.)

The Vyllies – Whispers in the Shadow
This wonderfully-sad downtempo track is from an impossible-to-find EP that was released on Creep Records in Athens, Greece. Unlike their feverish, fuck-all synth-punk song, “Babylon,” this one shows a frail side to the female group. Now here’s a tissue, darling. Please get yourself together…or actually, don’t. You’re quite lovely this way…

Venus in Furs – In My Velvet Cage
Another great, long-overlooked British synth-wave group from Sussex. This sexy little pleasure fest is the perfect soundtrack for staring into your mirrored boudoir at midnight, slowly chanting “Bloody Mary…Bloody Mary…”

Victrola – A Game of Despair
This is an eight-minute B-side off Victrola’s Maritime Tatami 12-inch (a remastered version of which is included in the digital download version of the Cold Waves compilation). They were a short-lived Florence band on the Electric Eye label that also produced Body Section in ’82, one of the greatest minimal electronic compilations ever, frankly, introducing the world to the likes of Jeunesse D’Ivoire, Litfiba, Monuments, Diaframma, and Kirlian Camera.

Martial Canterel plays a rare set at Home Sweet Home tomorrow night. Wierd’s next two releases are both debut albums: Frank (Just Frank)‘s The Brutal Wave and a self-titled effort from Automelodi. They’ll be available on July 6 and 13, respectively.