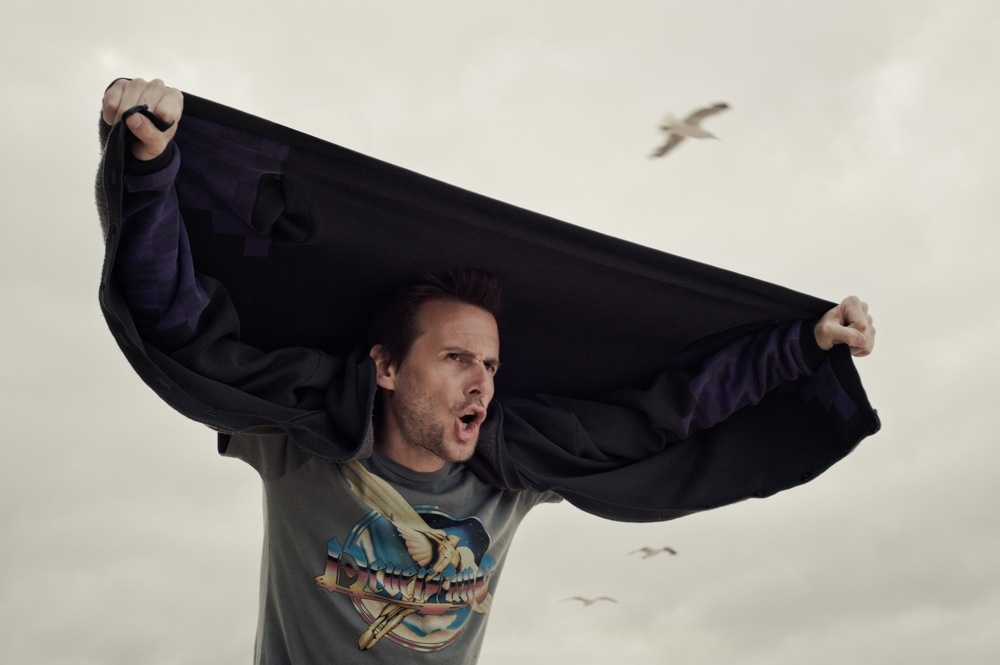 Seeing as he’s one of the secret weapons on the beat science side of Warp’s roster, we’re psyched to share Clark’s latest album–his sixth, in case you’re counting–a week early. Featuring live guitar loops, the inimitable melodies of Martina Topley-Bird, and cross-continental sessions in seven different cities (including some with his labelmate Bibio), Iradelphic easily switches gears from musty, Boards of Canada-like breaks to delicately tweaked pop tunes.

Have a listen below, alongside Clark’s track-by-track commentary (Ed. note: our limited-time-only stream is now over, but you can still listen to the record on Spotify here)…

1. Henderson Wrench
This was originally an eight-minute track in about four sections. There were too many eggs. The ending is a huge orchestral drum I recorded at Snape, in England. I recorded it with this really old Telefunken mic. The bass that thing picked up was ridiculous really. As soon as I found that, the track came into place. Weird how one sound can just close something off so easily.

2. Com Touch
This was a modular jam I did, in a few different takes. I’ve always wanted to use a Prince snare in a track, just because it’s not very me; it felt like it engrained it with a new touch. I was hopping round the room for ages with this one, especially when it drops. Couldn’t wipe the stupid smile off my face for a while. I like how you count 10 with it, and it works. Not intentional; the riff just happened like that.

3. Tooth Moves
This was originally a long guitar jam that was nice enough, until one day with a particularly savage hangover–still quite drunk–I attacked it with a synth, put through about eight layers of guitar pedals. Which was very, very, very fun.

4. Skyward
This one popped out in about 20 minutes. It’s easy to ruin music like this with too much post-production, so I left it as it is. There’s something about its sadness and mystery that I couldn’t help but come back to again and again when compiling the album playlists. The title, to me, totally fits with the structure of the track. The melodica was recorded about eight years ago, but I completely forgot about it until writing the synth part to this.

5. Open
This was recorded after a long session with Martina [Topley-Bird] at Hot Chip’s studio. Martina and I were in this hypnotized state, endlessly coming back to that one line. It was not quite satisfying enough though, so I went back to it and built a flute-esque synth part round it. All in one take; I just burnt it onto a TDK in my old Technics tape deck. I love what that thing does to mid range.

6. Secret
The second part to “Open,” really. A fairly mammoth task. Had about four hours worth of different versions of this. It all came together in the mastering of it.

7. Ghosted
A super old and dusty guitar jam. I re-transcribed it and recorded it ‘better’ but it totally didn’t work. It sounded too clean. It’s quite a pop structure, really, but obscured through a smoky haze of distortion, with no singing apart from at the end.

8. Black Stone
This was nailed in about half an hour after muckin’ about on a piano for a few days in Snape, again. It’s nice to record stuff quickly sometimes. You can ruin recordings by over working them. I can’t really see what you could add to this track without ruining it. The IDM community, tasteful lot that they are, would probably want to hear it chopped up with an “Amen” break in 11/7 over it or something.

9. Pining Pt. 1
This originally had vocals on it, but they didn’t work. The intro came much later than the rest of it. It sort of hangs in the air, suspended and full of mystery. The track without that intro really had no place on the album. The first drums we recorded around the time of “Turning Dragon,” so I was sort of treating them as if they were hardcore techno drums. Which didn’t really work, as you can imagine. I wanted to make them light and skippy.

10. Pining Pt. 2
This was initially an experiment in colliding sound sources, but it ended up being a track in its own right after Martina did some vocals for it. The idea was to have this abrasive, harpsichord funk-out that gradually becomes more expansive and melodic, full of emotion and melancholy as the vocal and melody slinks itself into the fabric of the beatwork.

11. Pining 3
I had this melody on loop for about five hours. I was kind of hypnotized by it. The hard part was condensing it down to such a short piece. I’m really into using the higher registers of synthesizers; they can soar and cut through the mix beautifully if you treat them right.

12. Broken Kite Footage
This was originally a guitar layer from “The Pining,” but I set up this configuration of valve amps in my old flat and processed it with pitchshifters and plate reverbs through the amplifiers until it sounded utterly destroyed. It completely transformed itself, emotionally, from the original part from “The Pining” that I intended it to be. It amazes me how sound can take itself through all these changes and end up being something different to what you started with. It’s the whole point of the quest for me, witnessing these changes and guiding them into place. It’s a looming, ambiguous and sorrowful track to end an album on. I wasn’t going to give it a Hollywood happy ending.