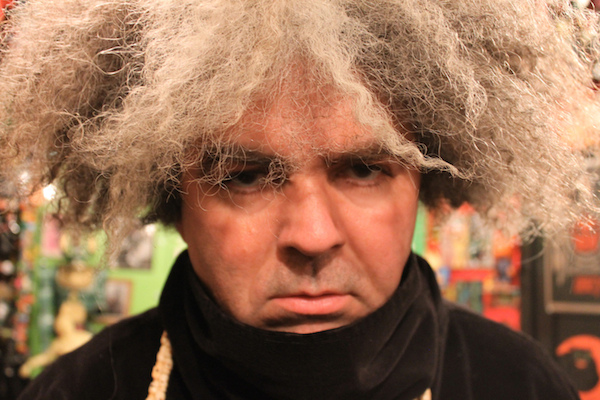 “Daunting” is one way of describing Melvins‘ deep, deep discography–look at that list–although “good luck” may be more like it. That’s why we asked frontman Buzz Osborne to sort through their towering stack of live albums, studio records and EPs for us, giving us the dirt on more than two decades of essential heavy music. And yes, that includes this year’s The Bride Screamed Murder LP, excerpted in the following MP3: 1. The Bride Screamed Murder (Ipecac, 2010)
Obviously I dig this one because it just came out. It’s one of our best and at this stage of our long career that is saying something. The recording went fast with no problems; no one went insane and I didn’t have to play anyone’s parts for them… 2. Colossus of Destiny (Ipecac, 2001)
One of my favorites. This is a live record but it’s as much of an album as any of ours, so let’s not cheapen it just because it’s live. We weren’t originally intending for this to be an album but once we listened to it we knew it should be. One of our shining moments. 3. Egg Nog (Boner, 1991)
Recorded very quickly for less than $500. I wanted to do something fast and without extras so it’s an EP. I prefer EPs but the public doesn’t. They just don’t sell as well and I’ve never been able to figure out why. I think this came out a few months after our Bullhead album did, but I’m not sure. 5. Hostile Ambient Takeover (Ipecac, 2002)
We always loved this album but we had more returns for this record than any other we’ve ever put out. We have hundreds and hundreds of these just sitting at our practice place, yet now it’s considered one of our “best” by people who never bought it in the first place. It’s always interesting to have people tell me we should do another album like this one. Do they mean one that even more people won’t buy? Great idea! Do you guys have any more good ideas for us? 6. The Bootlicker (Ipecac, 1999)
This was a fun record to do because we didn’t use ANY guitar amps on it. We just put the guitars and bass straight into the board. No Pods or amp modelers either. Amazingly enough no one noticed. It came out just a few months after the Maggot record and received some of the worst reviews we’ve ever got. People were for some reason upset that we had the balls to do an album that was totally different sounding from one that came out the same year. What a weird thing to be mad about! 7. Stag (Atlantic, 1996)
We had a blast making this great, great record and I think it shows. I got to get a whole lot of music out of me that I never had before. I was listening to a lot of Fuggs at this point and it rubbed off, especially on songs like “Black Bock. “This record received almost across-the-board bad reviews especially from the metal press, who strangely enough have warmed to this album now! 8. Gluey Porch Treatments (Alchemy, 1987)
I barely remember recording this. We had just gotten back from our first ever U.S. tour and we were very, VERY pissed off and discouraged. No one cared at all about this stuff for years. We were really proud of this and I still am. It’s a really weird, good album and it set the bar high for us right off the bat. GREAT! I love a challenge. 9. Honky (Amphetamine Reptile, 1997)
We knew we were doomed to be dropped from Atlantic so we went ahead and recorded this without them knowing–or caring probably–then we went on tour for the next 18 months just to make sure no one thought we were dead. This album cost very little to make and there are a couple of things I don’t like on here but nothing to complain about really…It’s a good listen… 10. Houdini (Atlantic, 1993)
This album is mostly just me and [drummer] Dale [Crover]. Either I played bass or he did on almost all of it regardless of what the credits say…Cobain “produced” it until I canned him for being a screw up in the studio. In hindsight, we never should have bothered with him at all. All it ended up doing is costing us a lot of money. This is an okay record and believe it or not I actually prefer the 2005 live version…ï»¿