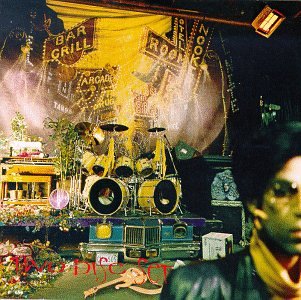 By Samuel Bing of Fol Chen MUST HAVE
Sign o’ the Times (1987)
Everyone knows that double albums are a tough row to hoe. Unless that ho is Prince! (Yeah, yeah, sorry.) For real, though, this what all double albums aspire to: sprawling, ambitious, funny, intimate, epic, batshit crazy. And here’s the craziest part: it was meant to be a TRIPLE ALBUM, but Warner Bros said nope (see below).

Without taking a breath or giving a shit, this album moves from utterly deranged bliss (â€œPlay in the Sunshineâ€) to adorable psychedelia (â€œStarfish and Coffeeâ€) to minimalist sex rants (â€œHot Thingâ€) to radio-friendly weirdness (â€œU Got the Lookâ€) to solo-Lou Reed-style guitar churners (â€œThe Crossâ€) to live, ten-minute funk beatdowns (“It’s Gonna Be a Beautiful Night”). Also, it features THE GREATEST SONG OF ALL TIME: â€œThe Ballad of Dorothy Parker.â€ INTERMEDIATE RECORD
Parade: Music from the Motion Picture Under the Cherry Moon (1986)
Sonically, this one feels most important to me. The dryness, the hard cuts, the empty spaces, the cracked-out orchestra–I love this shit! I also love it because Parade might be Prince’s most aggressive attempt to merge his freaky outsider instincts with his straight-up pop genius. The most obvious example of this is â€œKiss,â€ which sounds like a standard I-IV-V R&B vamp that got the guts beaten out of it by killer robots sent by Kraftwerk. Brittle drum machine, no bass, nearly all falsetto, and straight to No. 1 on the U.S. pop chart.

â€œKissâ€ flows right into the sublime riot-goin’-on-in-my-bedroom melodrama of “Anotherloverholenyohead,” a song that manages to be menacing, funky, heartbreaking and otherworldly all at the same time. Unfortunately, the movie Under the Cherry Moon was a disaster/fiasco, and album sales were disappointing, which led Warner Bros to tighten the reins on Prince, thus depriving the world of what might have been the best triple-album in history (see above). ADVANCED LISTEN
Around the World in a Day (1985)
Who knows how terrifying it feels to have to follow up what is considered one of the best albums of all time? Prince knows! Purple Rain sent him into the stratosphere, where he mingled with Madonna, Bruce Springsteen and Michael Jackson. A lot of people in Prince’s position either flip out or disappear into the studio for a few years (which is what Bruce and Michael did), but our hero returned just a year after Purple Rain with this brazen attempt at exoticized psychedelic new wave art-funk.

This is bold stuff, especially for an artist coming off a record that spent six months at No. 1 in the US, and it doesn’t always work. â€œThe Ladderâ€ is a craven attempt to bathe a little longer in the Purple Rain, and â€œTemptationâ€ is probably the only song from this era that I can’t even hum. But then there’s â€œRaspberry Beret,â€ which is perfect in every way, and â€œPop Life,â€ which has to be one of the creepiest songs ever to make the U.S. Top Ten. And when the weird stuff really works you end up with the 7-minute â€œCondition of the Heart,â€ with its unsettling piano/spooky-synth/cymbal intro and its disturbingly unhinged falsetto madness. â€œTamborine,â€ one of my favorite freaky ones, is all decontextualized “Funky Drummer” madness, martian harmonies, and sexual panic. It’s a minimalist freak-pop masterpiece: concise, precise, and totally bananas.