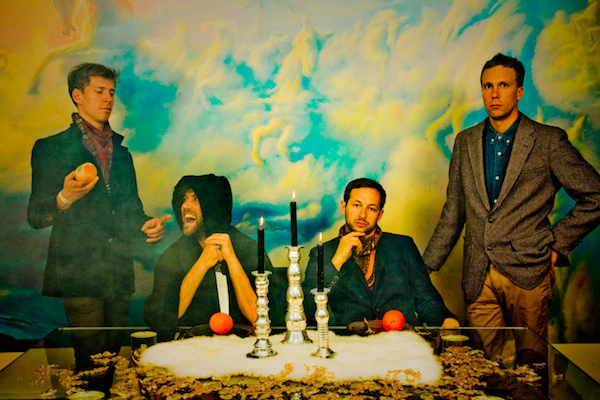 Ziggy Stardust is great and all, but let’s be honest: one of David Bowie’s greatest contributions to popular culture is Labyrinth, the Jim Henson vehicle starring a young Jennifer Connelly, a sound stage full of manic Muppets, and one hell of a codpiece. Suckers know this. It’s one of the reasons why their long-awaited debut LP (Wild Smile, out now on Frenchkiss) sounds like the soundtrack to the fever dreams of a million puppeteers.

“In the beginning, we made a really conscious effort to not sound like anyone in particular,” says Austin Fisher, one of three singers/multi-instrumentalists (see also: his cousin, Quinn Walker, and Pan) that founded the Brooklyn band in 2007. “Of course, that’s gonna happen anyway but we never tried to make something that sounds like this band or that band. Hell, we didn’t even want to sound like ourselves too much.”

Ain’t that the truth. Check out a downloadable example of what we mean after the jump, along with four of the guys’ favorite fantasy films. The band’s record release show for Wild Smile is tonight at Brooklyn’s Music Hall of Williamsburg.

“I’m hoping that one day, with all of the money I make from Suckers, I will be able to buy my own Oompa Loompas”

NAIRBVILLE
I first saw Nairbville when I was 8 or 9, though not many of my friends has heard of it. [Editor’s Note: We haven’t either, so if you can find a clip from it, let us know!] A dysfunctional team of Japanese businessmen and women decide to go on holiday in South America. Soon enough, they find themselves stranded in the heart of the Amazonian jungle, overcome by fear, hunger, and internal discord. Losing sight of their surroundings, they are ambushed by a group of giant arachnoid hunters (the Substantia Nigra) and taken captive. When the situation reaches hopeless desperation, the Japanese team is rescued by a foppish walrus character who calls himself Nairb. In a brilliant display of wit and heroism, the Japanese are brought back to a utopian oasis: Nairbville. Here, bathing in crystal streams, singing harmonies together, and teaching one another to love, the Nairbs teach the fraught city folk to overcome their anxieties with modern life; they are taught to embrace that which is more deeply fundamental in human nature…

To this day, my band and managers continually bug me about getting an iphone and checking my email. I think it’s because of the impact Nairbville had on me that I still resist. â€“ Brian Aiken

TROLL 2
There is not a single appearance by a troll in the film Troll 2. It’s the story of a family that rents a house in a tiny country town called Nilbog. Young Joshua is pretty nervous about the vacation in the country because his dead Grandpa Seth keeps visiting his dreams and warning him about angry, vicious goblins who want to kill him. Joining the family’s vacation in Nilbog are three dudes in a rented RV. One of these dudes, Elliot, dates Joshua’s older sister. Elliot and the sister are having issues because Elliot has a co-dependent homoerotic relationship with the other two dudes.

Anyway, it turns out the name of the town, “Nilbog,” is goblin spelled backwards and the entire town is populated by goblins who want to eat the family. But the goblins won’t eat the humans raw. They first must force them to consume spoiled milk and cakes with green frosting, which turns the humans into green vegetable gelatin. The goblins love the gelatin. With the help of ghost Grandpa Seth, the family escapes ravenous goblin folk. There’s also an appearance by a witch priestess who tries to seduce the RV boys by filling their RV with popcorn while wearing lingerie. The cast is a mix of actual actors and local Mormons from the area in Utah where they shot the movie.

When I was little, I used to catch bits and pieces of this movie shortly after it came out in 1990. I think it would play on HBO. It was definitely the weirdest thing I’d ever seen, but I had no idea what it was called and I never saw it in sequence. It was always a bizarre mystery. Finally, in college I made a friend who had a similar experience with the movie, and he told me it’s called Troll 2 (he actually bought an original script from one of the actors). Seeing the film in full was a revelation. The kid (now an adult) who played Joshua even made a documentary about the making of the film called The Best Worst Movie. It kind of ruins the mystery of Troll 2, but it also deserves to be known. â€“ Austin Fisher

UNICO IN THE ISLAND OF MAGIC
Probably the scariest cartoon I recall seeing as a child. I decided to look it up recently on the computer without remembering the title, just fragments of terror in my head, as well as a cute little anime unicorn. To my pleasant surprise I discovered the entire first and second unico movies were available on YouTube! I rewatched both (second being In the Island of Magic, which is much better) and found them to be just as frightening as ever.

I guess viewing anime as a child in the ’80s had a much different impact than it does now. It was so obscure and new to Americans. My sister and I watched it repeatedly; I think we enjoyed how uncomfortable it made us feel. The parts that stuck with me were the intense scenes of psychedelia, the villain Lord Kurucu, and the people he turned into emotionless puppets. Once I rediscovered it I ecstatically showed it to my girlfriend at the time, who quickly became obsessed and dressed as unico for Halloween. I highly recommend this movie–two thumbs way up! – Quinn Walker

WILLY WONKA AND THE CHOCOLATE FACTORY
I’ve seen this movie so many times it’s ridiculous. When VCRs first came out, my dad would tape all the movies off of the TV and we’d watch them over and over. It’s kind of a demented movie, but also teaches you some good life lessons…All of the crazy scenes and psychedelia must have burnt some sort of impression in my brain. Not to mention that this and Little Shop of Horrors were probably the only musicals I could deal with as a kid (Although, I would always fast forward past the “Cheer up, Charlie” scene).

Actually, now that I think about it, this movie is a lot like what Suckers try to do with our music–a really pop kind of movie following a basic story structure, but made up of some of the most interesting and crazy scenes you could think of! I’m hoping that one day, with all of the money I make from Suckers, I will be able to buy my own Oompa Loompas and glass elevator…Then everything will come around full circle! – Pan