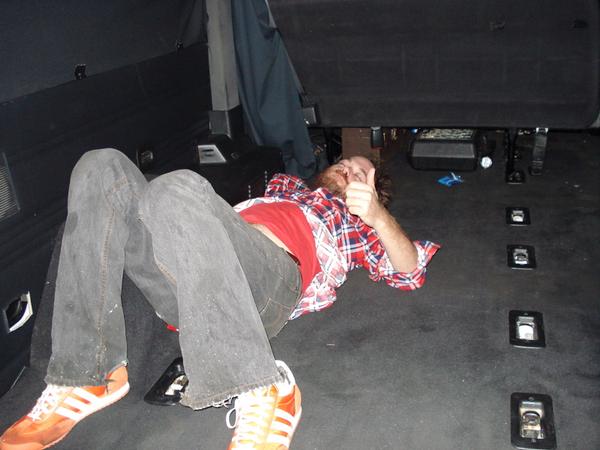 Since Henry Owings already told us why Harvey Milk rules, we figured we’d open the floor to drummer Kyle Spence and bassist/kick-ass cook Stephen Tanner. In the following post, they give us a brutally-honest beginner’s guide to their entire discography, from the rubber-burning ZZ Top nods of The Pleaser to their “most pretentious” LP yet, this spring’s A Small Turn of Human Kindness. Our favorite line from a story that’s full of ’em: “This record is pretty great except for the performances and the sound of all the instruments.” Oh, and this: “So fuck you. At least it’s better than Tortoise.”

If you like what you hear, be sure to check the guys out at (Le) Poisson Rouge tonight, as part of New York’s ongoing Blackened Music Series. The Singles (Relapse, 2003)
When Relapse wanted to put this out, our excitement was palpable. To be on the same label as Cephalic Carnage, Dying Fetus and Jucifer…our ship had come in. We designed artwork for it that Relapse refused to use, and then they waited 10 years to put it out on vinyl. Pretty smart. We cringe whenever we read the liner notes that we had nothing to do with; you probably do too. As far as the records that are included in the release, one of them was put out by our friend Chief. God bless the casinos. Most of these sound pretty terrible, which fits well with the quality of the writing and playing. The Kelly Sessions (Escape Artist, 2004)
The worst in our canon. [Frontman] Creston [Spiers] was basically tricked into sending the rough mixes for this to somebody that put it out without our knowledge. It was never mixed and basically was forgotten about. Most songs also appear on our other records in much “better” quality. Avoid at all costs. Harvey Milk (Hydra Head, reissued in 2010)
Most of the songs on this are on other records and the versions here are generally substandard and barely adequate compared to their later incarnations. Recorded in Chicago in ’94 and obviously never released because the guy that was going to put it out disappeared with the tapes. We only wanted to put this out to give people an alternative to the horrible sounding copies that have been floating around for years and to take full advantage of our fans that will buy anything we release, especially on overpriced vinyl. It’s going well. My Love Is Higher Than Your Assessment of What It Could Be (Yesha, 1996)
This record is pretty great except for the performances and the sound of all the instruments. Courtesy and Good Will Toward Men (Reproductive, 1997)
Considered by most “journalists” and “critics” to be our finest album, but there are in fact only two or three okay songs and then nothing but bullshit filler to pad it out into a double LP. A good two-thirds of that record is complete horseshit and that’s why we hardly ever play anything from it live. Putting it out was a joy of course–500 copies of hand-printed sleeves and stuff thrown into the void in 1996. At least this was reissued numerous times by numerous labels, mostly without our knowledge or consent because the guy that put it out originally thinks he “owns” it and can do whatever the fuck he wants to. Seriously, he has a bunch of copies sitting at his house that he wont give us so we can sell them at shows or whatever because he’s “saving them for his grandkids.” Give us a fucking break. And our records. The Pleaser (Reproductive, 2000)
This record should have been called “The Disappointer” because disappointed is exactly what we were after we recorded it. It sounded so bad we had to remix it ten years later so we could bear to hear it. Now it sounds okay, but don’t worry–you’ll still be disappointed when you hear it because you’ll be expecting some crap like Courtesy and you’ll get shitty blues rock instead. So fuck you. At least it’s better than Tortoise. Special Wishes (Megablade, 2006)
Our “reunion” album. Basic tracks were recorded in New York by the most inept engineer to ever walk the earth. Had to be finished in Georgia and took a good week of work to get it to the point of sounding even halfway useable. Some good songs on this one, too, so it’s even better that it sounds so bad. Don’t worry about it, though; we put it out with one of the worst record labels ever, so you’ll never find it as it’s been out of print for the last couple of years. Maybe we can get around to reissuing it later on or something, but dont hold your breath–it’s not very high on our list of “band priorities.” Life…The Best Game In Town (Hydra Head, 2008)
How about “Life…The Worst Record In Town”? Creston hates this so much that we barely play a single song off it. Hard to blame him when so much of the album is a complete waste of music. This from when Joe [Preston] was in the band, but all he does on it is play bass on a couple songs because Stephen would get so shitfaced that he would pass out at 4 p.m. everyday, much like during Special Wishes. Hard to blame him either, when youre working on songs this half-baked and substandard, even for us. Put out by Hydra Head, who somehow managed to put their bongs down long enough to design a vinyl version that was so expensive to produce that we have to sell them for 30 bucks which barely covers the cost. Good thinking, guys. Live At Supersonic 2008 (Capsule, 2009)
Don’t forget this diamond in the rough. Recorded in Birmingham, England, during our first time overseas playing at the Supersonic Festivus. Mixed here in Georgia. Sounds pretty good, but don’t let that fool you–these are still the same bullshit songs that we’ve always played, except this time there’s a guy that used to be in the Melvins (Joe Preston) trying to play them with us. Listen carefully for the horribly out-of-tune guitar on the left side: that’s Joe P’s 200 dollar BC Rich piece of shit guitar that he got to use with us and then carried it around in a gigbag all over the U.S. and Europe. No wonder we couldn’t use almost half of the songs from this set. Anthem DVD (Chunklet, 2006)
Reasons to avoid the Anthem DVD: It was compiled and released by Henry Owings of Chunklet fame, who reissued it and included a terrible show from Athens in 2005 or 6 that we SPECIFICALLY TOLD HIM NOT TO RELEASE. And then we caught him selling a DVD-R of that show on his website. Thanks Henry! Not sure why you would need any other reason than that, but if you do just ask yourself why you would want to watch the same songs played over and over throughout the years when there was so much other material that could have been used instead. A Small Turn of Human Kindness (Hydra Head, 2010)
This was made for all the people that think Courtesy is our best album. We came up with the most pretentious music we possibly could, and since that wasn’t enough, we wrote ridiculous words about total bullshit and named the songs in the most annoying fashion we could imagine. But we thought we could keep pushing the envelope; we named the album the same thing as a song on another album of ours (My Love Is Higher…) and then designed an album cover that truly shows you how much we care–it’s a picture of some trees. We have reached the point of complete and total creative bankruptcy, but at least we made it shorter than the last record, so you can get through listening to it and return it to the store for a refund faster.

Previous PEEP SHOW: Watch a Couple of Live Mercury Lounge Collaborations Between Washed Out and Small Black
Next MOVIES FOR THE BLIND: Cage Files His First Film Column From the Frontlines of the Oscars