PRIMER: Lilacs & Champagne On … The Art of Sampling 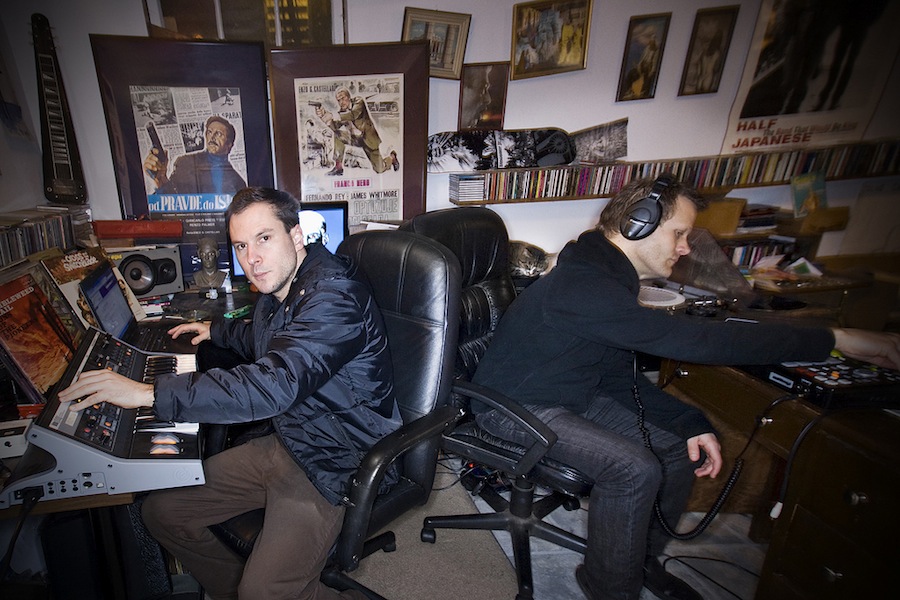 Lilacs & Champagne had us at goodbye–namely the line in their bio that promised “something like the sound of Nurse With Wound collaborating with J Dilla.”

Not that any of this loop-led tomfoolery should be all that surprising. After all, Emil Amos–one half of the Grails-related duo alongside Alex Hall–lent us a library music mix in late 2010, calling the cult favorites a “hidden pinnacle for those who can afford to dig around in the upper echelons of obtuse record collecting in these troubled times.”

Luckyily, the following artists have done the digging for us over the years…

Emil Amos: While avant-garde and popular music generally stand opposed to one another, hip-hop exposed its relationship to experimental music early on. Its easy to forget that crate-digging is a humanist practice–largely celebrating and obsessing over the accomplishments of others and paying tribute to them. Afrika Bambaataa led the charge on pure record knowledge, borrowing melodies from Kraftwerk and John Carpenter on some of his first releases. Meanwhile, Russell Simmons pulled Bruce Haack out of the cultural refuse to build an early imagining of futuristic hip-hop (a wise decision):

Instead of trotting out the hip-hop classics that built the industry we know today, we’re going to babble about our personal relationship to sampling as it slowly brewed over the years and developed into this new project…

Along with a few hundred thousand kids around the world who were also buying SST records and skateboarding, my artistic outlook was changed when I heard “Poledo,” Lou Barlow’s tape collage contribution to Dinosaur Jr.’s You’re Living All Over Me. Before this, I’d maybe digested the Beatles’ “Revolution 9,” but never really perceived the emotional power of how samples can ruthlessly alter the context of a record when they are juxtaposed against ‘songs’.

I remember sitting in English class sometime around ’89 with a Walkman, baseball cap and bomber jacket on when “Poledo” unapologetically exploded into a war of static, howling, and voices chanting “Jesus” for a couple minutes. Hearing “Poledo” changed a legion of kids’ lives, definitely opening up an artistic void to be explored beyond your average “1, 2, 3, 4 = punk rock.”

A cult developed around this sound. About a year later, I was at a rollerskating rink in the backwoods of North Carolina that let skateboarders have the floor for 30 minutes at a time and put on their own cassettes. “Poledo” came over the speakers from my mixtape and a kid waiting to drop in on the ramp next to me said, “Fuck, this is my favorite song!” (The camaraderie in the air was heavy; I’d probably have trusted that kid for the rest of my life.)

Later on, records like Weed Forestin would further my understanding of sound experiments and the profundity of how a well-placed sample can cause the listener’s mind to drift in a psychedelic sense, as well as focus on the meaning of the surrounding sentiments even more (see: the way “Sky Pilot” was sampled in the segue above). Every member of Sebadoh developed their own tape experiment style, all educating and scarring my young mind with the power of noise and selected incoherence. I cooked the video below up as a tribute to Bob Fay’s “Mor Backlash,” from one of the lesser known crevices of their discography.

I’ve always been a want-to-go-back-in-time kid. It either started with seeing Michael J. Fox getting towed on a skateboard by ’50s-era Cadillacs or growing up on Twilight Zone and Alfred Hitchcock Presents. I’m not sure. I relate more to the era when Todd Docstader was scaring the shit out of little kids who’d snuck the radio under their sheets late at night during his peak period from ’61 to ’64. He was his time’s lonely lab sound-technician, working tirelessly to develop an alien/future language of musique concrÃ¨te and noise as a mood-altering device. Docstader re-organized samples into a sort of audial nightmare; cutting and warping found sound and developing his own radical methodology–he approached the sample of a guttural scream like a guitar solo.

Although Eno will always get all the ink, Docstader ought to be in the running as the American counterpart for the invention of ambient music.

A quick scan of YouTube is all it takes to see that as soon as anyone buys a sampler, they are quick to adopt a legendary-sounding pseudonym and call themselves a ‘producer’. Never to mess with trivialities or wasted words, Dr. Dre brought hard work and perfectionism to the table and helped build the entire template hip-hop relies upon today. His songs betray a signature cleanliness from the beginning of his career but never lose their dirty swing. He’ll be remembered as the Adam Smith of hip-hop, a founding architect with a monastic work-ethic.

This solo record was a forward-thinking take on mixing instrumentation and sampling into an impressive stew, and still remains relatively unheralded. Ju Suk Reet Meate (from tape-collage/multi-genre pioneers Smegma) is a kind of Docstader for our era. Consistently listenable and rewarding on repeat, he recorded this material in ’78/’79; it was repressed to CD by De Stijl in 2007.

Madlib’s work made me circle back to my earliest experiences with Sebadoh’s tape collages and feel like I wanted to contribute something to the larger dialectic of sample-based music. After having wrestled with 4-track recording daily throughout the ’90s, blasts of hiss, tape-drop outs and low-end distortion are all entities that still get me high. Madlib leaves these frayed edges on his recordings like scattered keef around a Doobie Brothers record–always displaying a certain spiritual confidence that’s generally lacking in the world of rigid beat-making. In a genre that is often referred to as ‘the most lucrative music in the world’, Madlib’s work represents the fact that there’s still more fundamental work to be done on the ground floor, and that there will always be vitality where there is true insight or the willpower to look for it.

Alex Hall:The thing I remember most about going to the public swimming pool as a kid was how much cooler late ’80s Top 40 radio sounded from underneath the water. Several years ago on an overseas flight, I read a shitty Rolling Stone interview with Scott Weiland in which he admitted to writing one of his radio hits after hearing Zeppelin distorted and filtered through the spray from the hose he was using to wash his Porsche.

Fairly trite anecdotes here, but I have to think that these kinds of experiences are pretty universal, and not at all unlike the story of Eno’s inspiration to create Discreet Music–being bedridden and unable to adjust the obnoxiously low volume of the classical record that was playing just out of his reach. Familiar sounds, when heard from within a compromised or manipulated context, seduces the brain into filling in the cracks for itself–sometimes arriving at something new along the way, a sort of compulsory active listening. This toying with the familiar is a huge part of the psychology of sampling, a process of sound begetting sound. And like hearing “The Final Countdown” while submerged in the deep end of the pool, I like Eno’s version of “Canon in D” way better than Pachelbel’s.

I’d been reading The Wire casually for years before I actually got around to hearing Philip Jeck’s music (who’s name-checked in every issue). When I did finally hear it, I was blown away by its visceral aspects. Jeck’s turntablism can be as menacing as Wolf Eyes or as soothing as Popol Vuh, sometimes within the same piece. In terms of sampling, Jeck rarely borrows a whole melody or phrase; instead processing and breaking his source material down into its elemental form–basic building blocks for composition. And perhaps more than any DJ-centric genre, Jeck’s music could be the ultimate example of vinyl fetishism, with the actual music pressed in the grooves at times being less important than the crackles and noises of the wax itself. I guess Christian Marclay is usually credited with bringing turntablism to the avant garde, but it’s Jeck’s music that brings the, well, music.

It’s intimidating to qualify Donuts, a record so closely identified with a dude that meant so much to so many people. I’ll just say that there aren’t many records I’ve heard in the last few years that have had such a huge emotional impact on me as a listener. At first glance, it could be just a collection of beats and sketches–albeit, a really killer collection–but as with most art, process and product can become inseparable, and the heartbreaking story of Dilla’s illness and his completion of the album just before his death reveal layers of subtext and a remarkable focus of intent. Like magnetic poetry on a fridge, samples are chopped and skewed with precision to deliver a totally new message, which also happened to be his parting message to the world. Certain tracks here, with the mental image of the man in his hospital bed with his sampler and records, have nearly brought me to tears more than once.