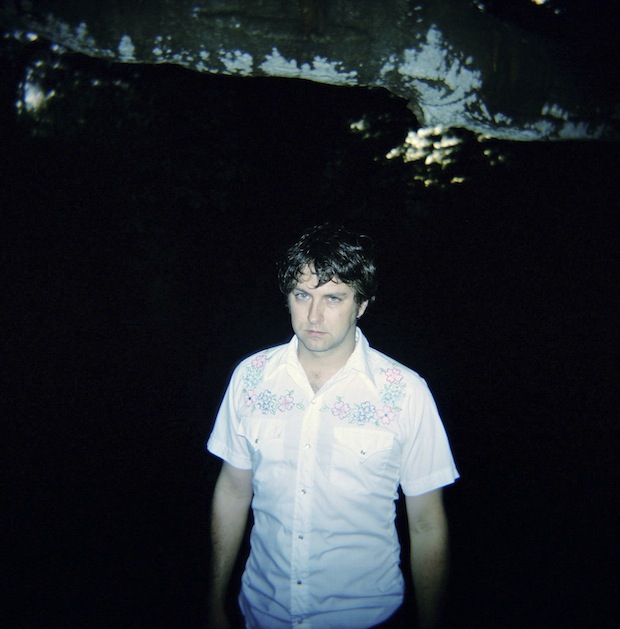 With more than a decade of side projects (Comets On Fire, Badgerlore, August Born), limited releases, and asymmetrical studio albums attached to his name, digging through Ben Chasny’s back catalog is daunting to say the least. That’s why we asked the Six Organs of Admittance frontman to give us a guided tour of his full-time gig–so we could make sense of every last cabin-dwelling jam session, ambient noise passage, and finger-picked chord… Six Organs of Admittance (Pavilion, 1998)
Living in Eureka. Pretty much a collection of the home recordings that I had been doing for a few years without ever thinking I would release them. Originally released on my own Pavilion label in an edition of 400 with hand painted covers. I had just gotten an espresso machine and I think the influence can be heard on the last song on the record (“Don’t Be Afraid”). Dust and Chimes (Pavilion, 1999)
Living in Arcata. I thought that the first record was going to be all I did in this vein of music but then I recorded the song “Dance Among The Waiting,” which created the template for this second release. Theme wise, it was very inspired by early morning meetings with my friend Rob Fisk, who was still in the band Deerhoof that he founded with Greg Saunier, and recording their record Holdy Paws at the time. We’d drink coffee and talk about wood creatures and he let me borrow a book called Dreamtime by Hans Peter Duerr, which became a big influence on the mood of the record. Originally released on CD on my Pavilion label again. The Manifestation (Ba Da Bing!, 2000)
Living in Eureka. This recording features the wild space hand percussion and mouth harp of Utrillo Kushner, who would later become the drummer for Comets On Fire. His friend Jennifer recited some crazy and frantic vocals over the top. Very influenced by Brainticket and Sergious Galowin. Dark Noontide (Holy Mountain, 2002)
Living in McKinleyville. This started as a by-mail collaboration with my good friend Ryan Hildebrand. Ryan played guitar in the Southern California bands Los Cincos and Volume 11 and was pretty much the only person who I talked to for five months. Most of the beautiful ambient passages on the record are due to him. Drinking lots of boxed white wine at the time. Compathia (Holy Mountain, 2003)
Living in Santa Cruz in a dark basement type room and having [Comets On Fire frontman] Ethan Miller come over a few times a week to polish off numerous beers and jam tunes very loudly. Somewhat dark but very exciting times. Pretty much only listening to Nikki Sudden at the time. For Octavio Paz (Time-Lag, 2003)
Living in Santa Cruz. All of these songs were recorded at the same time as the songs on Compathia. Essentially I just separated the vocal songs from the instrumental songs and put them out on different records. I always considered the two releases as sister records. Both are the only records to have a picture of me on them, both have their titles inspired by [Mexican writer] Octavio Paz, and both where recorded at about 2 a.m. School of The Flower (Drag City, 2005)
Living in Oakland. The first studio recording. My idea was a heavily jazz-inflected release with a heavy cosmic vibe, ala Alice Coltrane. Like every release, it just sort of came out like Six Organs. It was a lot of fun to explore the studio environment with [drummer] Chris Corsano, who pretty much made the record. I feel like a lot of the songs on this are played much too fast, due to my nervousness from being in a studio. First record working with Drag City and I was pretty nervous as to whether or not they would dig it. The cover was done within a 24-hour deadline by my friend Steve Quenell, who went on to do almost all the rest of my record covers and art. The Sun Awakens (Drag City, 2006)
Living in Oakland. Another Octavio Paz-inspired record title. Sort of went through a Melvins revival, which was my favorite band when I was 19. Having a bunch of friends come in to sing the chant on the last song (“River of Transfiguration”) was great. Tim Green (The Fucking Champs, Nation of Ulysses) really blew my mind with his recording skills and ideas for sounds. He pulled a Leslie speaker out of an organ and then wired a voltage control switch for it, so we could alter the speed, which he then ran some guitar through. Shelter From The Ash (Drag City, 2007)
Living in San Francisco. My idea for a classic minimal cover wasn’t thought out all the way to realize most people just have the covers on their iPods or computers, so it doesn’t look that great in that way. I still think it is a great looking and feeling record on vinyl with the rough texture of the front and the super glossy collage by Steve Quenell on the back. The last song on the record is one of my favorite songs I’ve recorded (“Goodnight”), but I can’t remember how to play it. RTZ (Drag City, 2009)
Living in San Francisco. Basically, this was my excuse to release a triple gatefold package. Steve Quenell came through on the artwork. Going through all my old music to compile this one made me realize I don’t really like revisiting the past very much. Re-editing the songs on my computer allowed me to fix some of the crazy-ass fades and other things that I used to have to mix in real time from the 4-track to a DAT player. Luminous Night (Drag City, 2009)
Living in Seattle. Recorded with the mad genius Randall Dunn. One of my favorite records to record, in terms of good times. Randall’s ideas just kept flowing to create a really textured record. The acoustic guitar was recorded with a mic in one room and a contact mic on the guitar going to a different room with a leslie speaker. Eyvind Kang sort of redefined what it means to be a musician for me. I think back very fondly on this time, despite the lyrics being wretchedly bleak. Asleep On The Floodplain (Drag City, 2011)
The first recordings for this record started in San Francisco and I finished it up in Seattle. I got [Magik Markers frontwoman] Elisa [Ambrogio] a harmonium for Christmas, which oddly enough ended up on a lot of the tracks on this record. Even though recording Luminous Night was an incredible amount of fun, I sort of wanted to lighten things up a bit sonic wise and with the lyrics. Recording at home proved to be more frustrating than I remember because my home wasn’t soundproofed, so many takes were ruined by large trucks outside or the neighbors starting up a lawnmower.

Previous NOW PLAYING: Nicolas Jaar, ‘Space Is Only Noise’
Next POSSIBLE PULL QUOTES: Odd Future On … Working With the Neptunes, Tyler, the Creator’s ‘Goblin’ LP, the ‘Goosebumps’ Series, and More