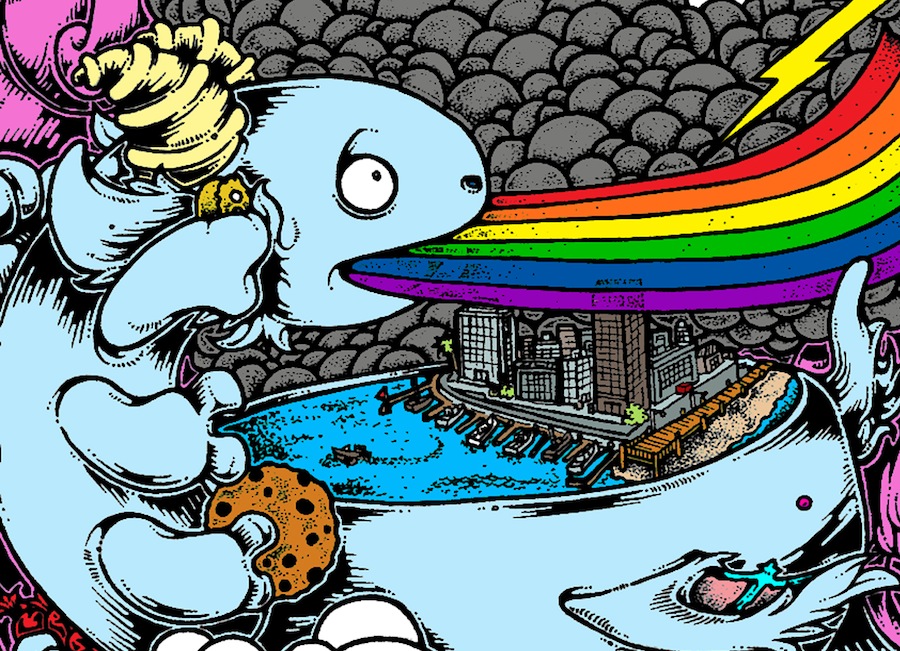 If you were wondering just what the hell Torche was thinking when they approved the love-or-hate sleeve for Harmonicraft, John Santos has broken its rainbow connection design down on his blog, including such priceless tidbits as the following:

The Harmonsters being floating islands of fun, needed something that would convey their whimsical nature. Then, I remembered the guys’ love for sweets. Easy. I just added tons of the stuff that I had grown up snacking on. There is a little something for everyone with various varieties of candy in the design.

Steve also wanted the creatures to breathe rainbows. Why not? Harmonsters probably shit sweet rolls, so rainbows were an awesome addition to the mix. They’re also what the narwhal disco ship are floating on. You can’t have good without evil, so it was suggested a few could be fighting with a some darker members of the species. Not only can these “dark ones” breathe storm clouds to block out the rainbows, but they do battle with vegetables. Tomatoes, asparagus, carrots, broccoli, and an eggplant serve as weapons against their do-gooder sugary nemesis’.

Read the rest here, and for the record, we dig just how eye-gougingly loud this layout is.