Sebastian Plano
Shares the Stories
Behind His New Album 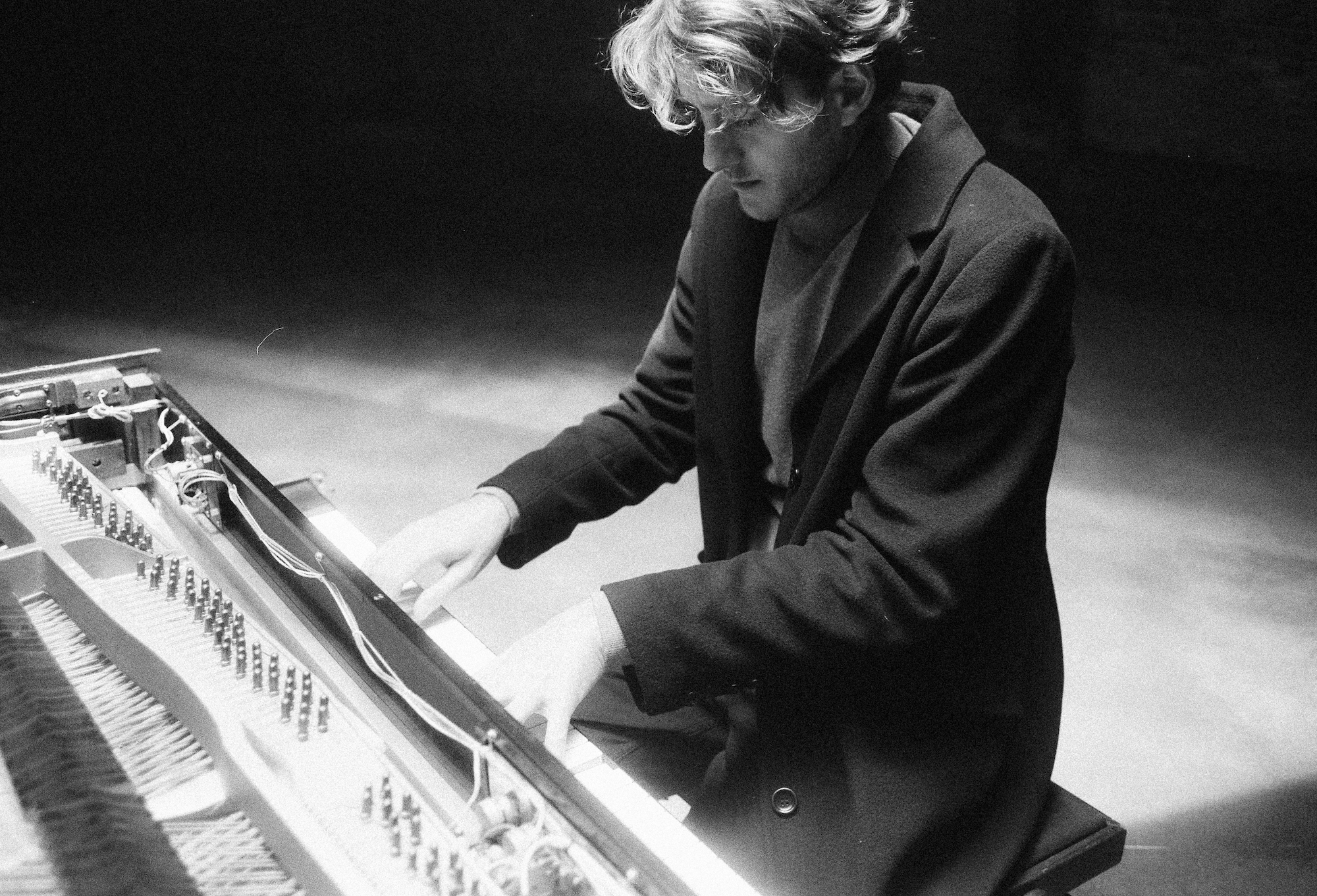 In short, Save Me Not (Mercury KX) focuses on the alternate reality I enter when I create, how this world becomes more bearable than the real world, and how I don’t (hypothetically) want to be saved from being lost in that world forever.

It was recorded entirely at my studio in Berlin between late 2019 and mid 2020, and it was done through the process of creating ensemble music by myself. I played and recorded each instrumental line and layered them on top of each other creating ensembles.

I’ve spent years playing chamber and orchestral music, and this has directly shaped the way I write and record today. I interact with my own recordings as each player would individually. 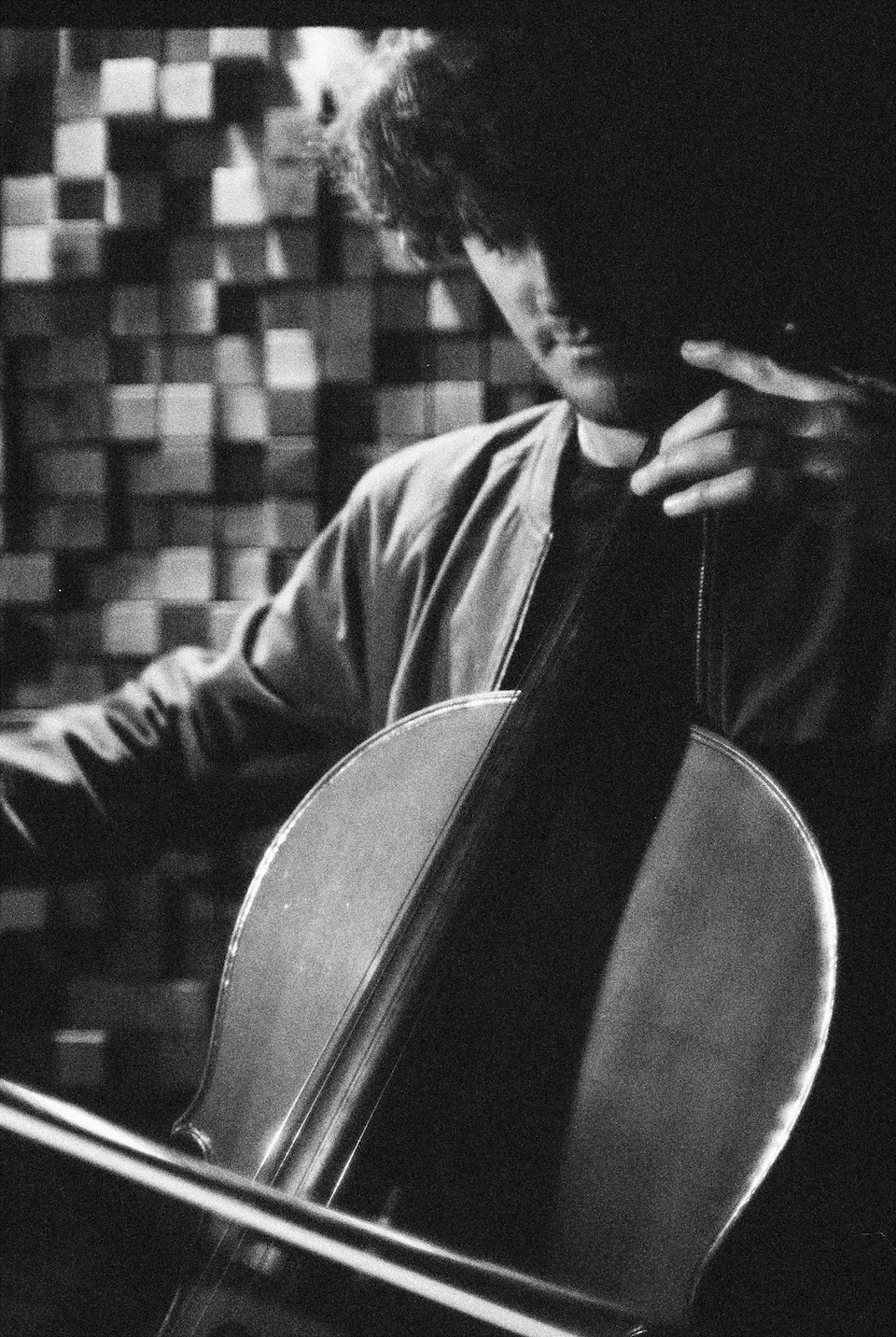 About the instrumentation in the record…. I wanted to narrow down the possibilities and focus on only using the main two instruments I play — cello and piano — plus having my voice as the third instrument.

The percussion elements were made recording various objects around my studio such as hitting the floor, the squeak from my studio chair, and beating on tables and cabinets. The piano used is a Yamaha CP-80 electric baby grand, the cello is an author-cello made by Leonardo Anderi in Buenos Aires in 2007, and my vocal cords were created in 1985.

Timbre and tone have always been a central focus for my music; this entire record is about the nuances and tone in the playing. I believe music can reach and connect with an audience only when it carries energy within. I don’t look for perfection in the sound, but rather what that sounds makes me feel instead. 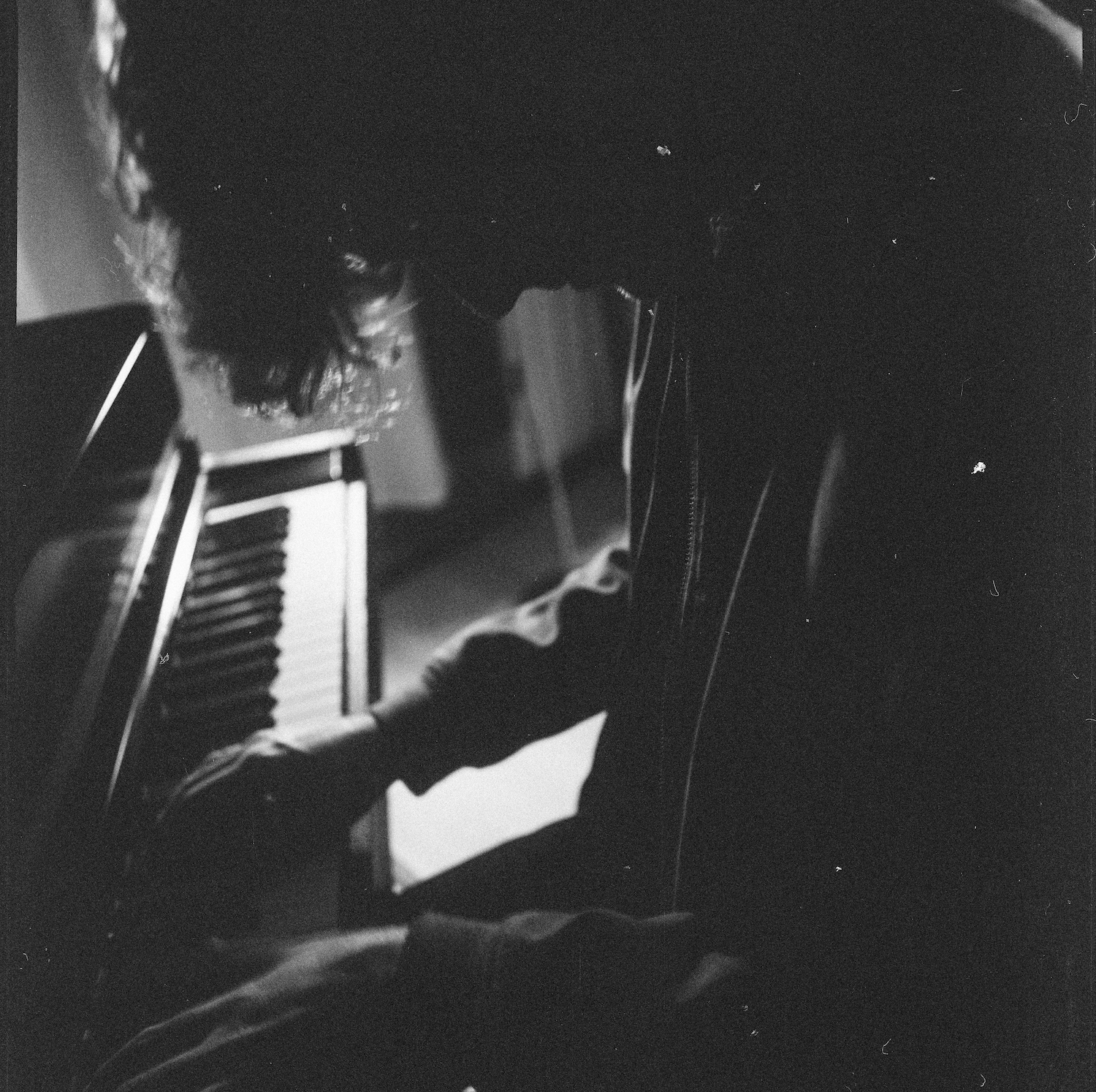 Writing music has been a need since an early age; it simply has the power to place me away from the day-to-day reality. The title is certainly metaphorical, but it transmits a clear message of how important it is to cultivate one’s own inner self. This record is an invitation for the listener to do so. I believe this has the power to make us more empathetic with each other — resulting in better, more caring societies.

I wanted this fourth title to be a record that can best represent me as a musician and as a person; the record is an introspective journey, a quest, where I converse with myself away from all awareness….

“AGOS”
I never think of an album as separate pieces; always as a linked body of work. Much like my previous release Verve, the same piano theme opens and closes the album. In “Agos,” the theme is reversed. It gives shape to a sort of storytelling, creating an arch throughout the record.

I wanted to start the album with the sounds of my voice, the ethereal texture in the intro comes from experimenting and processing it electronically. As the track grew, I couldn’t take the sound of a choir off my head and started layering up several vocal recordings creating a vocal ensemble which really opens up the sound at the second half of the piece.

“SAVE ME NOT”
I approached this title track as the mission statement of the record and decided to use my voice once again to achieve this. This time it would be a simple melodic descending line singing “save me not”, which repeats throughout the track. I like the idea of having a metaphor in the track that could represent its title through the music; myself coming back to reality at 02:43, but returning back to my own realism at 03:16 and to finally remain in it.

“Choosing to remain in your own solemn realism instead of accepting a one-time-only chance to return back to life as we know it.”

The track begins with the only loop happening in the entire album; a hypnotizing short piano excerpt that was recorded in San Francisco back in 2012. Despite its poor recording quality, it carries great energy, I knew it would become to be the start of a new work sometime in the future.

“A PRESENT FOR A YOUNG TRAVELLER”
The track represents the story of a young person leaving home in the search for something. The challenges that were faced along the road will in the end be rewarding.

I left home (Argentina) at age 17 to study abroad. For the next 10 years, I would come to live in five different places, always following where my cello would take me next.

The title for the track comes from an anecdote that happened when I first came to Berlin; I arrived to the city to meet someone who would shape a new pathway for me for years to come. He opened up a drawer, picked something up, placed it into my hands and said; “Here, a present for a young traveller.”

I wanted the music to narrate this short story.

“OBSEQUENCE”
This track intends to be a personal reflection on society; are we progressively becoming less socially and politically engaged as technological advances keep making our lives easier?

My point of focus working on this track was achieving an expansive and broad sound, always evolving with various themes interchanging. This was the track in the album in which I wanted to have the calmest pace, in a way working as a sort of closure to all the music that has happen up to this point in the record and opening up space to start a new chapter with the subsequent “Prelude To A Soul.”

“PRELUDE TO A SOUL”
This is the prelude to the three-part “Soul” suite. The track presents a harmonic progression which will be present throughout the suite, as well as the later-recalled “Soul” theme, which happens at 00:30.

The track was recorded only with cello, by overlaying each recorded line on top of each other, creating an entire strings ensemble.

The “Soul” trilogy is an introspective journey of the immaterial characteristics of individuals. It can be understood as a personal depiction and view on three states of a soul: contemplative, exuberant, and playful. 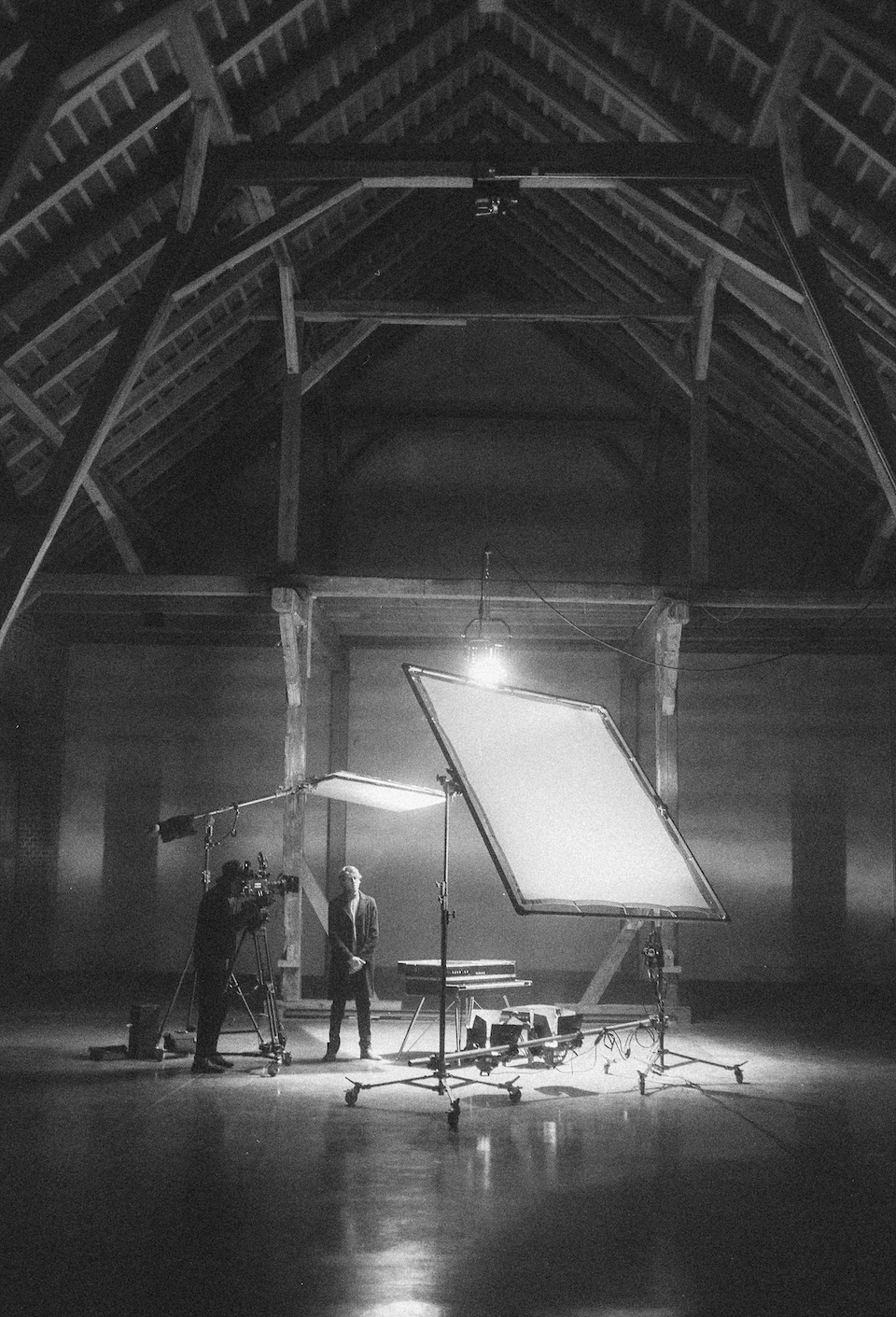 This three-part work originated as a single track entitled “Style of Souls.” The process of working on it had become lengthy and somewhat frustrating, to be honest; there was something the music was calling for which I couldn’t manage to bring out.

After working on the track for a while I came to the decision to destroy the entire thing and reconstruct everything from scratch. This is where the three-part story emerged, a sort of suite of three movements.

The trilogy explores the characteristics of a soul or anima. It represents the contrasting aspects of our spirit; from a reflective and contemplative to the exuberance and excitement to the playful and fearless.

“SOUL I (AVOW)”
The suite beings with “Avow” — a frank, introspective journey through my soul.

While working on this track, I was asking myself, “How would it sound if a soul could sing?” I was then experimenting and processing the cello in various ways leading to the opening cello of the track, which represents a soul-singing chant. This was achieved by editing normal and reversed cello recordings together and really focusing on the nuances in the sound, as if the cello would be saying words.

“SOUL II (ELAN)”
The second part of the suite was built running the Yamaha CP-80 piano through a Roland RE-201 analogue tape echo delay, and creating several very short and articulated piano lines and counter lines which are all interconnected with each other while an ensemble of strings progressively grows underneath.

Its title recalls a state of euphoria and exuberance.

“SOUL III (YLEM)”
The ending part of the trilogy was done entirely with a cello, except for the rhythm percussion introduced at 03:07, which was created using my studio chair squeak which was accidentally recorded and then processed electronically. The entire track is build using different sort of delays, layering several cello pizzicato voices one on top of each other.

Part three of the suite is called “Ylem.” The word means something along the lines of “primordial substance from which all matter is formed,” and derives from the Greek word for matter.

As the astronomer Carl Sagan once said; “We are made of cosmic dust and dust we will become.” The life circle couldn’t be more beautiful and perfect. This track was all about finding the sparks, the excitement about a living soul and the miracle of life.

“NEVER LEARNED”
This track is an elegy which represents my interpretation of the human incapability to learn from our mistakes. I’d specifically call it humanity’s inability to learn sensibly.

The track beings with a string trio conversing with each other, while a piano theme goes underneath as a foundation of the entire piece. Halfway through the piece, the gentle and pianissimo tone of the beginning transcend into a majestic and broad ensemble consisting of piano, strings, and vocal lines, but heavier and with a slower tempo this time.

This is perhaps the track that can better describe the making of chamber music by myself. Always listening to the piano, each cello line was recorded one after another, but always muting the one I’ve just recently played. I would mute and have the last cello line recorded be unconsciously sounding in my head while I would record the next, unleashing the complete string trio only at the end.

“LIV”
This is the point where the album decompresses — a closing chapter. With its reflective and contemplative tone and pace, it releases the energy built up to this point throughout the record.

The track starts with the piano theme that begins the album, but not reversed this time. The second section of the track intends to be a final outro for the entire record. 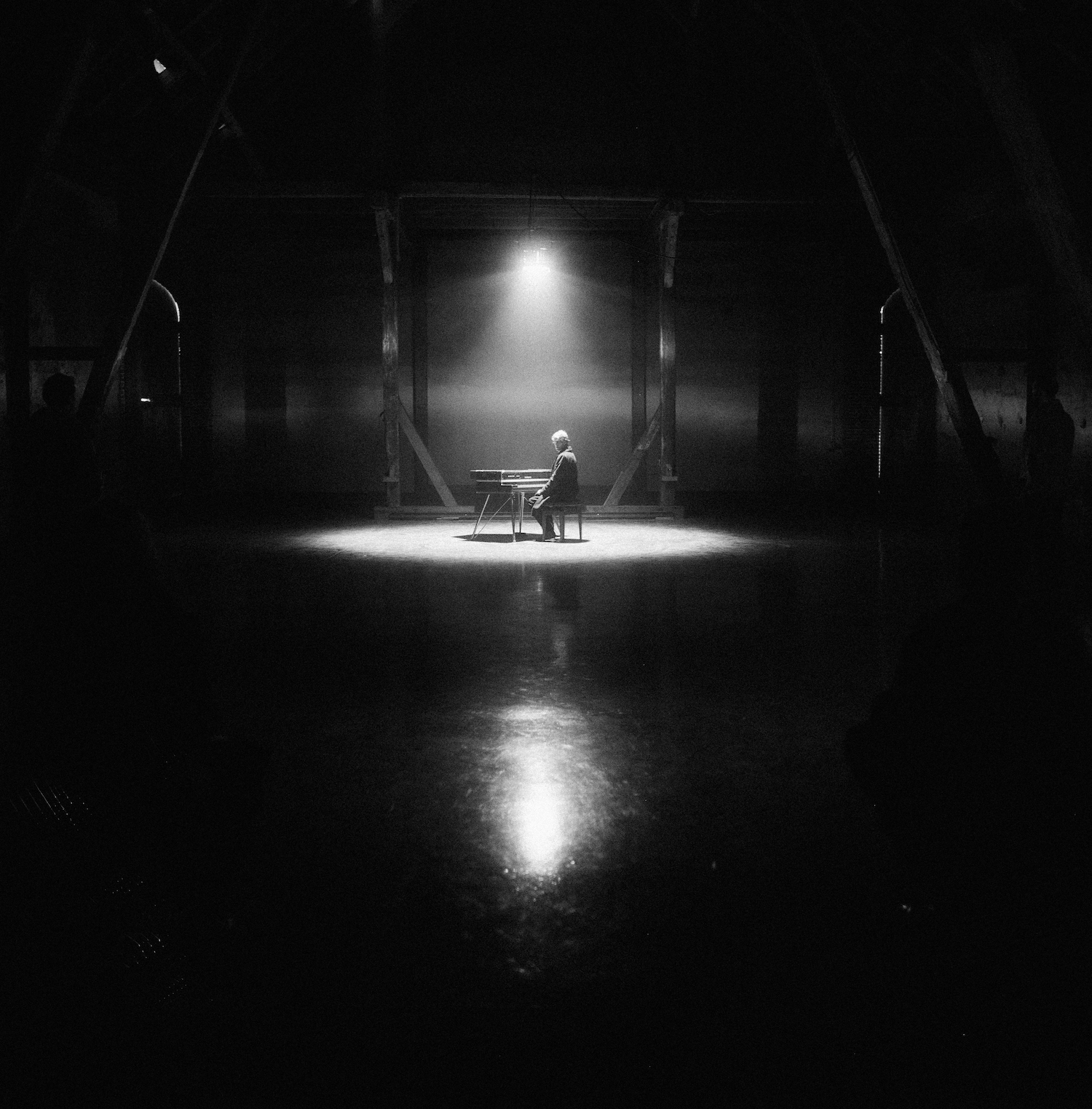