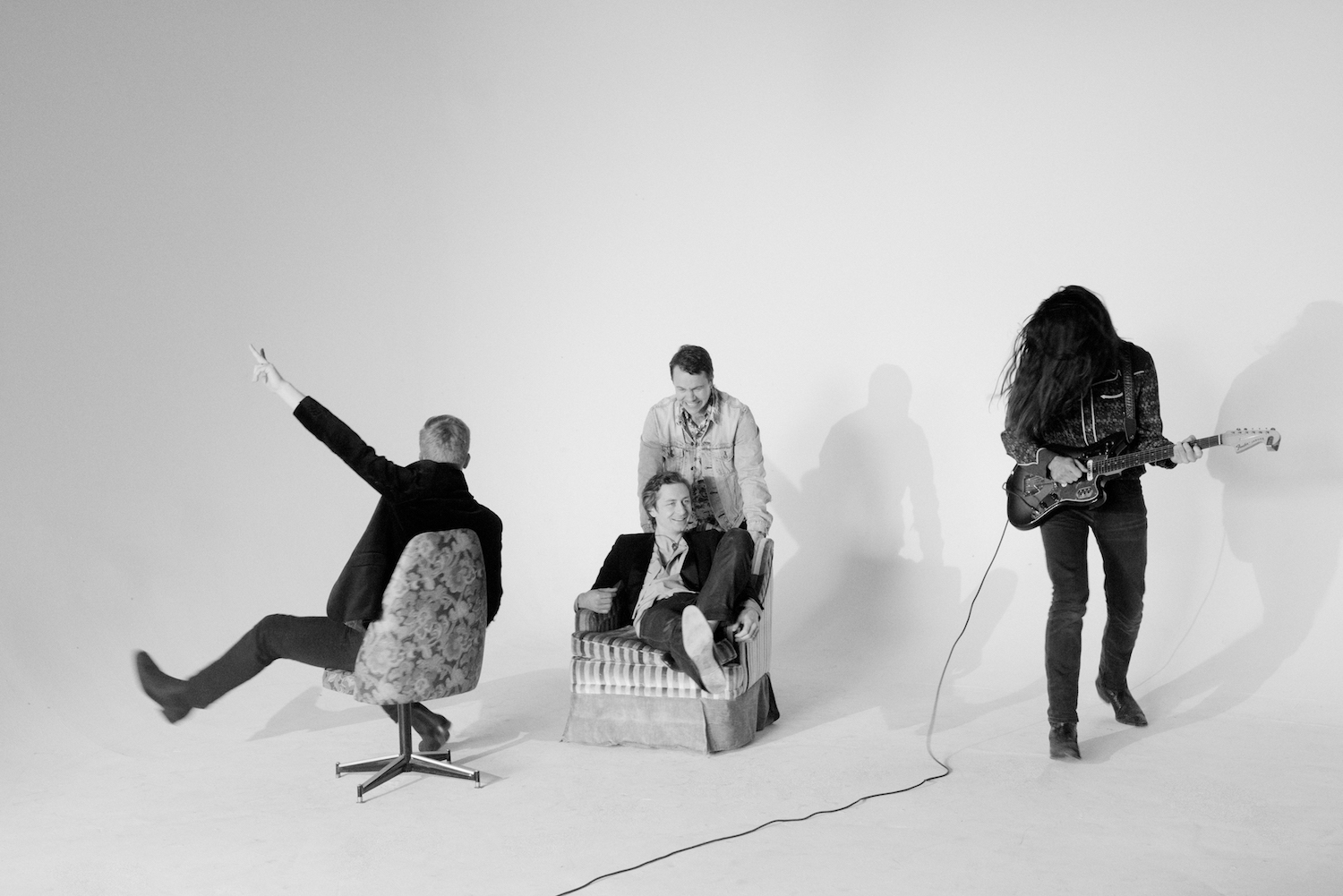 If there’s one artist everyone in Sleepy Sun can agree on, it’s Pink Floyd. Which kinda makes sense when you consider just how far they’ve come in their 10 years as a band, to the point where it’s not all that surprising to hear such rich shades of psych, folk, and hard rock on this week’s Private Tales LP. Not to mention a trippy drone tone or two.

“The spaciousness in this record is a testament to our maturity as songwriters and collaborators,” explains frontman Bret Constantino. “Perhaps we’ve become better at allowing the song to unfold on its own as opposed to forcing too many changes within a single piece.”

“One of the beautiful things about playing drums in Sleepy Sun is the amount of variation,” adds Brian Tice. “Things range from ‘laid-back’ grooves to dialed-up blast beats. As always each song is it’s own nuanced world and the more you think about your sources of inspiration the less time you have to write music.”

In the following exclusive, Sleepy Sun does just that; they discuss the intricate peaks and valleys of Private Tales in detail, right alongside a complete stream of the record….

Evan Reiss: Drone-fest. So many different versions of this song were created during the recording process. One of them featured a Lord of the Rings synth solo, Bonham-esque drums, and a ripping 12-string acoustic. Ended up being closer to the demo with an added layer of harmony provided by Hannah [Moriah].

Brian Tice: This is by far the first album on the record. It features a hidden vocal easter egg; hear if you can see it.

Bret Constantino: I’ve always been fascinated by the idea of speaking to the audience, or speaking to someone directly, without them knowing exactly…. ‘Is that me they’re talking to?’ I like when the listener has to question the content of the song and how it relates to them personally. I created this drone and then sang over it. It came quickly, organically. I showed it to the guys and didn’t know what to expect, whether it would appeal to them. We then re-recorded the drone in the studio, live, all four of us on synthesizers, for a good 10 minutes, late at night. We thought it made a foreboding introduction to the record.

Evan: Was really fun to play the guitar solo at the end of this tune. It’s always a good sign when something you’ve recorded freaks you out.

Brian: This tune was floating around for a long while. The drums for this song were partially inspired by Carla Azar, the drummer of Autolux, and her playing on their record Future Perfect. “Subzero Fun,” “Blanket,” and “Turnstile Blues” in particular. I watched them play live several times and her drumming style was memorable and catchy.

Bret: This was a song I struggled with lyrically. I took a melody from an older song that didn’t quite make it and I tried to adapt it to a new feel that we had going which, one of the biggest parts was that guitar line at the beginning that Matt plays. Most of the time with the music, the melody comes first and the lyrics come together based on how the music makes me feel and what it inspires visually. Often times it’s a communication between me and the band, where I’m saying things to them. They might not know that I’m speaking to them, but I am. Or I’m speaking to someone else. Or I’m saying something I’ve always wanted to say.

This is a song about nostalgia. That particular guitar line conjured images of dolphins and being out on the water, sparkles of light reflecting on the water, a hazy nostalgia. We rarely set out to deliberately write something, say, ‘Let’s write a pop song that sounds like nothing we’ve ever done before.’ It’s really as organic as, it starts with that guitar line, then the progression, then the loose structure, then the chorus….

“WHEN THE MORNING COMES”

Evan: Originally titled “Metal Opera.” The OG demo was spawn after Matt and I ingested a pot of coffee one morning in the Inner Sunset District of San Francisco. Jack nailed the bass tone during the final recording session—the guttural bass sound paired with Brian’s military drum break a la Phil Spector (“boom, boom, boom, chaaaa”) is music to my ears. 🙂

Brian: The official Sleepy Sun rock opera. Drums were written last for this track. The arrangement felt like different acts of a musical, so each section has different velocity on drums, or no drums at all.

Bret: I’m singing to myself in this song. It’s about a pretty disturbing, strange dream that I had. I don’t where it came from, but you wake up from this awful dream and you struggle to assimilate yourself into the real world, knowing that no one knows what you did in your sleep last night.

Evan: Pink Floyd is a good band. Matt threw down that guitar solo in one take or so. Good on ya, Matthew.

Matt Holliman: This is my favorite track on the album. It took a hard left turn at the last minute into the drone-y verse that made the cut. Originally I was messing around with a DADGAD tuning on guitar, and wrote the majority of the track with a Crosby, Stills & Nash-vibe in mind. It stood very well on its own, but with the incorporation of a Juno-60 bass line and a few other elements, it made more sense to strip it down. The chorus still has a bit of the original CSN feel.

Brian: There was a studio audible decision made to mellow out the the song and it turned out to be more dynamic and a bit more interesting all while making room for the vocal harmonies. It was a gamble for sure. Less can be more. Unharshed mellow. Don’t eat the marshmallow yet….

Bret: There was a magical thing that happened, and I didn’t notice it until a year later, but I noticed that the final note of When The Morning Comes works seamlessly with this song. This is one of the first tracks Evan and Matt sent me after I moved to Texas. We were struggling to be a band and work together. They titled this instrumental, just two acoustic guitars, without lyrics or vocals, “It’s Up To You.” I took this to be that they were telling me… ‘We’re going to be writing songs back here in California. It’s up to you whether you want to be a part of it.’ I was pushing them, you know, we can easily do this! I had this great mobile recording rig. We were sending stuff back and forth. I turned their working title into a positive reflection of all the things that we had done together and how we could continue that magic. Evan: This started as a Matt jam. Once bassist Owen [Kelley] pulled out the “Thunderstruck” intro at the practice space, I was hooked. Really fun to play live and the harmonies Bret cut on the recording are beautiful. Took soooo long for us to get the ‘oooohs’ right on the chorus… damn. Sorry, Colin. Still can’t believe we tracked what may or may not be a saxophone solo. ~Smooooth~

Bret: This song was inspired by the communication of the band and attempts to communicate better. “I just want to feel the sky fall forever, over and over again.” That doesn’t make any sense literally, but those lyrics come from a hip-hop sensibility—an absurd, cheesy visual inspiration

Evan: This started as a synthesizer groove that Matt, Bret, and I coined in the practice space when Brian was living on the east coast. It turned into a guitar monstrosity. Yay!

Brian: Drums came last for this one. I borrowed a friend’s electronic kit in Cambridge and emailed takes of MIDI drum recordings back to the lab.

Bret: It’s about, not a master-slave relationship, but a teacher-pupil relationship that was really difficult, but maybe that I needed. Writing this song was my coping mechanism, to move on and accept that I couldn’t be a part of that relationship, and that I was bigger than that. Songs are a way for me to really say what I need to say without talking to that person directly.

Evan: The writing sessions that led to this song being created featured Matt on guitar, Bret on bass, and myself on drums. Matt wrote the guitar hook and I added a Thin Lizzy-inspired guitarmony. The three-part vocal harmonies are pretty cool, man.

Matt: This is another favorite on the album. It has a very classic structure and there’s lots of guitar layers going on that weave in and out of the track. The chorus especially has quite a few guitar parts, and it was a real task to sit down and try to pick which one to approach for the live performance. I ended up blending a few of them together, grabbing my favorite elements to help the chorus build towards the end.

Bret: It’s a story about a piano that my girlfriend, now wife, brought to our home in Texas where we moved together. It has some playfulness; it speaks about this piano and how it might come between us. It’s funny, but it did in some instances. It’s a funny notion that she would choose the keys of the piano over me. This song was pretty much written and structured before I wrote the lyrics. When hearing the instrumental, I could imagine where the lyrics would go. It’s such a lyrical song; you have to think about not losing the listener. Country music inspired this song’s lyrical structure in that regard. Evan: This started as two different songs written by Bret. I went to his apartment in Oakland and convinced him to smash them together and added a bridge/solo section. Try to name a song with cowbell that sucks. It’s hard! Also dig the harmonic baby screams in the bridge.

Bret: This was a song that I wrote and performed while I was living in Austin. I love digging up songs and reviving them with the band. We tweaked it structurally. I got really into Stephen King’s The Dark Tower and some might catch some references in this song.

Evan: Wrote the structure to this one a few days before we were scheduled to record. Bret added a purdy melody and thoughtful lyrics. “Do we even love each other?” Heavy. Kathryn’s voice adds a lot, too.

Bret: The last two tracks were originally one song that we separated because they sounded like different songs.

Evan: Most of this tune was created on the spot/in the studio, aside from the main riff and vocal refrain. Brian is a reeeeeally good drummer. Music is fun.

Bret: Listening to music on vinyl with headphones is ideal, but I’d like fans to listen to Private Tales in the car, on a long drive at night, not going too fast, on one of those winding roads like the ones you find in Texas lined by 200-year-old trees, and it’s warm outside and the windows are down. I want fans to listen to the entire record—the whole thing—and not just the individual tracks.