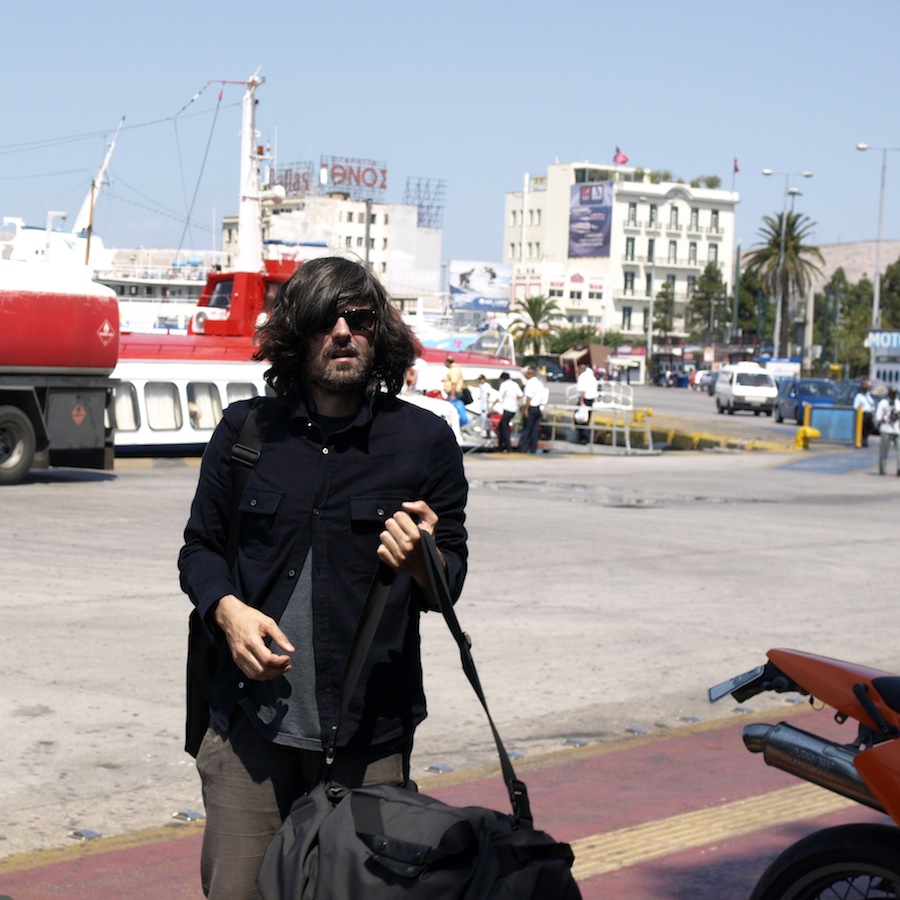 After finishing SOLOS, an eight record set in which six of them featured (just) one (type of) instrument each, I thought I should make an album for as large an ensemble as I could manage or afford. So I wrote my opera house record, Neue Friedberger Oper. The band for that, however, eventually became the not very large but not particularly convenient four double basses and two pianos. And it was already May. And I had run out of time. The NFO would have to wait.

So out of the opera house and into the movie business, I thought. I love the hit Eddie Harris “Exodus” version, and his “Theme in Search of a Movie.” I love John Zorn’s film music without a film, like Spillane and Bribe. (Though my favorite Filmworks record is the cartoon music Cynical Hysterie Hour.) As I am neither Eddie Harris nor John Zorn, I imagined that, not necessarily unfortunately for my resulting record, I could and should make a real “Poverty Row” production, as compared to their Million Sellers or Award Winners. A real Poverty Rue production, then, about an hour long and with that famous indeterminate tone–did they give up and try to make it funny? would it matter if  they did?–one with real stock or library or readymade or “Synchronization Service” music, hence the Chamberlin rhythms, etc.

Well: that’s the sort of record Matricidal Sons of Bitches turned out to be. It is an extremely clear, simple, unassuming sort of thing. It is very easy; it is very modest; its poor little parts are especially pathetic. What more does one want? Don’t tell me.

(By the way, and to be rude, I don’t like any movie rock records I know, or any rock music film scores, unless you consider JÃ¼rgen Knieper’s score to The State of Things rock music. I suppose this album–Matricidal Sons of Bitches–is about the textures, the already old and buried sound of…as much as possible; and that it is full from beginning to end of trick after trick, signifying nothing or its opposite. But what kind of person makes a record that isn’t? An extraordinarily dim or self-deluded one. But you don’t need to worry about that. There’s no rock music that I know of on this album; there is a sort of sub-rock music, however, like the bit of part 3 called “Disappointed Dads.” And that is lots of fun, or is very sad, and so on.)

But, you know, and I’m sure you do, but I’ll say it anyway. What’s simple isn’t so simple; and what’s complicated isn’t also. Now (if I was talking) I am going to speak generally.

To try to put it as simply as possible, music trains–forces you, drives you down the track–to think of (at least) two things at once. Again to speak crudely, it does this in two ways. The first is in regards to what might be called, but only metaphorically, content. A piece of music, however large or simple or useless, can and does have for the individual listener multiple (and I use the following word metaphorically) meanings. Actually it’s more severe than that: the same piece can, and therefore does, have opposite meanings. Not only is somebody’s sad song a carefree tune to somebody else; what I thought of as that cheerful number now seems quite grim to me. Or that smug bit that she played now seems, thinking of it again or listening to it again, rather effectively desperate. The second has to do with–and once more, it can only be called this metaphorically–form. When one hears a simple thing, one can’t help but complicate it, and as one is listening to it; this doesn’t happen after the fact. When one hears what strikes one as a complicated thing, one simplifies it, or focuses on (what seem to be at the moment) individual elements of the piece or performance. Listeners of all sorts, whether musicians or not, are constantly, and consciously or not, making new arrangements of what they are apprehending. One can’t help oneself; this is is what music does in being performed (which is obvious enough: performances are partial); maybe less obviously it does this in and as (the equally but differently active type of performance we call) listening. This is how–to quote David Byrne, although I don’t know if he says this in his new book–music works.

A simple song is never simply simple. I vary it immediately. And the fast bit slows down and the slow bit speeds up…simultaneously. Who doesn’t hear things that way? That is actually happening, as they say. Music forces you to think of not just the multiple aspects of any given (so to speak) object; it makes you hold in your head what seems to be the directly contradictory elements of a given thing simultaneously, and to have that perception be one’s starting point as one interacts with or intervenes in the object. So to speak. That is very valuable training, or brainwashing, and you get this sort of thing with mathematical education as well of course. But this sort of ‘thinking’ is what they used to call “dialectical.” But nowadays people are afraid of associations that term might have. Too bad.

By the way, the conviction that “still, it moves” is the great Copernican discovery made by minimalism. The music changes even when it doesn’t (and you can’t stop it). Still–or because of that–I can’t help regretting that most progressive rock musicians still have a minimalism of some sort as their starting point. The greatest ‘noise’ bands so far–The Who and the Velvet Underground–had a compound, and therefore much more sophisticated, approach. I wish more rock musicians today would engage with the “all made of up of tunes” sort of manner that animates a long tradition of American art music composers use of (what used to be called) commercial and vernacular material, down from Ives to Ellington to Coleman to Zorn. I am not suggesting that we rock musicians think we’re any of these people, however. We needn’t apologize for the sort of musicians we are, though, and in the inevitable attempt to enrich our practice, take refuge in the sort of thing that is, if anything, already and actually parasitic upon the effects produced by and in ‘our’ music.

I asked people to tell me what it was. This is what I learned…

Matricidal Sons of Bitches is in four parts. The first part is called “Ladies-in-Waiting.” Kelly (no last name) said this is what’s going on:

The scene changes to a fair in the Rathausplatz in Cracow. P. and her daughters are there, too poor to buy anything at all, but doing there best to disguise this painful fact by sneering at everything for sale. Then Prince W. arrives to great fanfare; but then he goes away; and then sneaks back in. He finds himself in Love with P.’s ugliest daughter. He does his dance of love; but it is hopeless. His father the Duke will never allow such a match. He runs off. But he can’t stay away. And neither can the daughter. The door bell rings. It is him, the Prince–but in disguise. They fake a murder/suicide–it is very convincing. And after the part is over they live happily ever after in the next kingdom over, where they have lots of–ugly–children.

The second part is “Brand-New-Mothers.” Trey Campbell tells me about this:

The Doge has gone dotty. He is so so old, but he lusts after the young women. Not only that–he wants to marry one and get a least a few pregnant. All the beautiful young ladies of Venice–and their boyfriends too–live in fear of the attentions of the crazy, droolin’ Doge. He creeps around with his cane through the bars and cathouses of his realm/city; he entices the beauties back into his golden gondola. And then what? You know what: he snuffs then out: but not really. He puts them in hiding, the better to resurrect them and gain more ‘magical’ power and glory or his evil ends. Is there no one who can stop him? No–there is no one.

The Giant motif and the Eternal Child motif are heard right at once. And then there’s the political part. But what really gets my goat, and now I don’t got one, is that the Dad song sounds like he likes it–whatever he’s got going on–but he doesn’t. He tries to make up his mind, he tells himself, but it’s not his problem. And then when the wife does her thing–then it turns out he was never married to her after all. She was married to a priest on Cheshire–and all the time they’ve been wherever they are. So then the president of the fan club comes to visit–he’s been working on a new marketing strategy for them–and that makes it even worse. So nothing changes. But he thinks it does. He’s wrong though.

The fourth part of “Dying on the Sixth Side.” Peter Z says:

I hear the one beat that is from Sandinista (on the 6th side) and also from “Benton Harbor Blues.” Is that the 6th side thing? And are they dying because they are old? And I like the one track with the cork in it. Did you do that? Were you celebrating something? Was it French wine? Do you like wine? What’s your favorite? I also like the sea and wind sounds. Did you record them yourself and did steal them? I don’t mean steal–you know what I mean. Anyway, I like this part a lot.

There you have it. Please, think of something else as or if you listen to my dear, heartfelt, sweet little record. I’m not being sarcastic. Thank you.