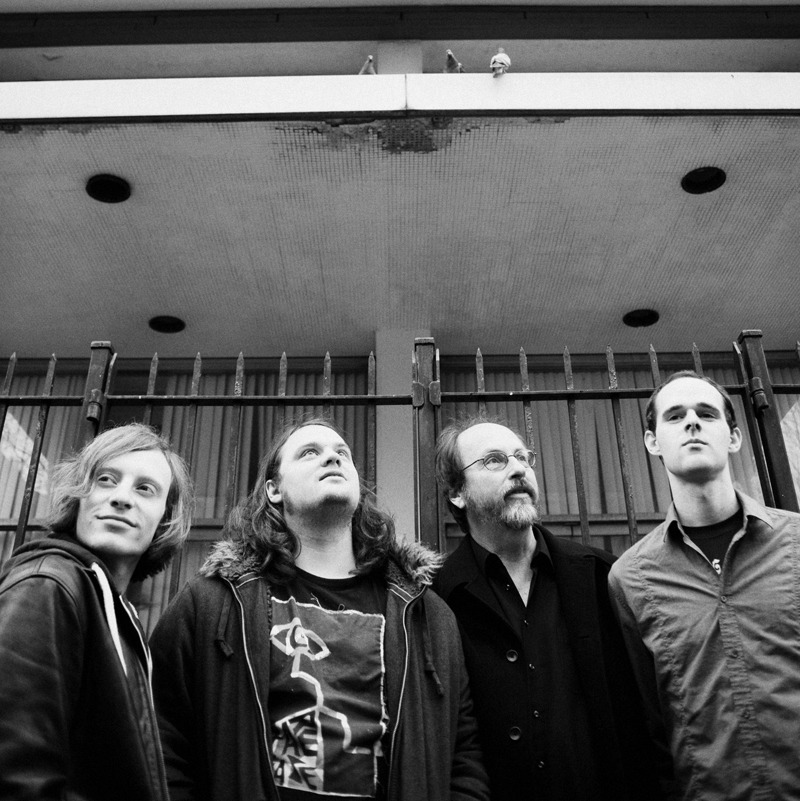 Check out the first part of our exclusive interview between Emeralds and legendary film composer/sound designer Alan Howarth in the magazine excerpt below (taken from our new issue), right alongside the rest of the conversation…

Part two of the conversation…

Alice is a great example of someone who’s on another plane than the rest of us without drugs.
Alan: Absolutely. A lot of ancient cultures had their own stuff that they did to [reach transcendence]. I’ve studied natural frequencies a lot, and it turns out that there’s ones that are in tune with the mind and the body. Some ancient cultures understood that. In fact, I discovered it while studying the acoustic resonances of the great pyramids of Egypt. The king’s tomb was actually tuned to be on these spiritual frequencies. It’s rigged so that anybody who went in there could go out of their body in there when they started singing. And that’s something that’s five thousand years old. It also turns out that whales, dolphins and birds naturally sing in tunings that are these same frequencies. Nature has a tuning. If you tune your A [note] to 424 [Hz] instead of 440, it puts you in this pocket.

I’m a little confused. What kind of tuning is most music in?
Alan: In order for everyone to be in tune with one another, the music industry established a set frequency for the note A. It’s called A440.
John: That’s the tuning fork standard.
Alan: And if you retune instruments to other frequencies, you’ll find they’re more resonant to the body, mind and spirit. The Egyptians and the Aborigines understood this. That’s when music became part of a religious experience. So that’s why I started studying this–to not only find out how it affects us as artists, but also find out how it affects our audiences.

So does your collaborative performance tap into these frequencies?
Alan: We elected to not go there because it was such a short schedule, but we’re going to work together in Cleveland when everything lines up again soon. We’ll probably make a whole album together, and get everyone to retune themselves to these other frequencies.

Have you guys messed with this before?
John: I dropped the frequencies of some stuff I did in Ableton down, and I thought it was better. It kinda freaked me out.

Is it something the average person could hear?
Alan: The average person will hear it.
John: But they won’t know what’s happening. It’s more of a feeling you get.
Alan: It takes some of the stress out of the music.
Mark: That isn’t something we worked with prior to meeting Alan, but it’s something we bonded over. We wanted to make our music more of a spiritual experience than just seeing a show or listening to a record, and Alan’s already way ahead of us on that so it brought us closer together.
Alan: Like I said, I’m 30 years ahead of them. Who knows where they will be 30 years from now? They should be able to levitate people by then.
John: It’s all a really interesting experiment with a lot of evidence to back it up.
Alan: It’s opening an alternate door.

So it’s more of a peaceful feeling?
Alan: Yes. It’s a resonance. It gets you into this place where people go when they meditate; where you’re open to new ideas and you have a clear head. Now that I’m an older guy, I’m interested in a wonderful, drug free spiritual experience that can be handed off to my audience.
Steve: Biofeedback has been used in art and music for more than 50 years. Like the experiment where they found you can play an instrument just by thinking. It works differently than a polygraph or something like that.
John: It’s natural stuff, which is just amazing.
Alan: It was easier 5,000 years ago because we weren’t so jammed up with outside information and alternate frequencies. Instead of living in a world with the Internet, television and radio, everything was just quiet.

So how did you develop your first performance together?
Alan: I came into it with a plan. Since we were short on time, I elected that we’d do some cues from films I’d already done, like “Porkchop Express” from [from Big Trouble In Little China] and some cues from Halloween. Not the theme; the more tension-wracked ones. Much to my surprise, some of the music we made back then is being listened to these guys as standalone pieces. They were created with the screen in mind, but now they’re being separated.
Mark: Which is how we feel about some of our textures and pieces. They’re in that vein, so to work on music from an actual horror movie is a lot like where we were coming from with some of our weirder material.
Alan: I started out in their place and went on this journey. Isn’t that what life’s about? Going on journeys and coming back to where you started with a new perspective? The only thing I’ve got on these guys is wisdom because I’ve already been there once and came back.
Mark: We can still beat you in basketball though.