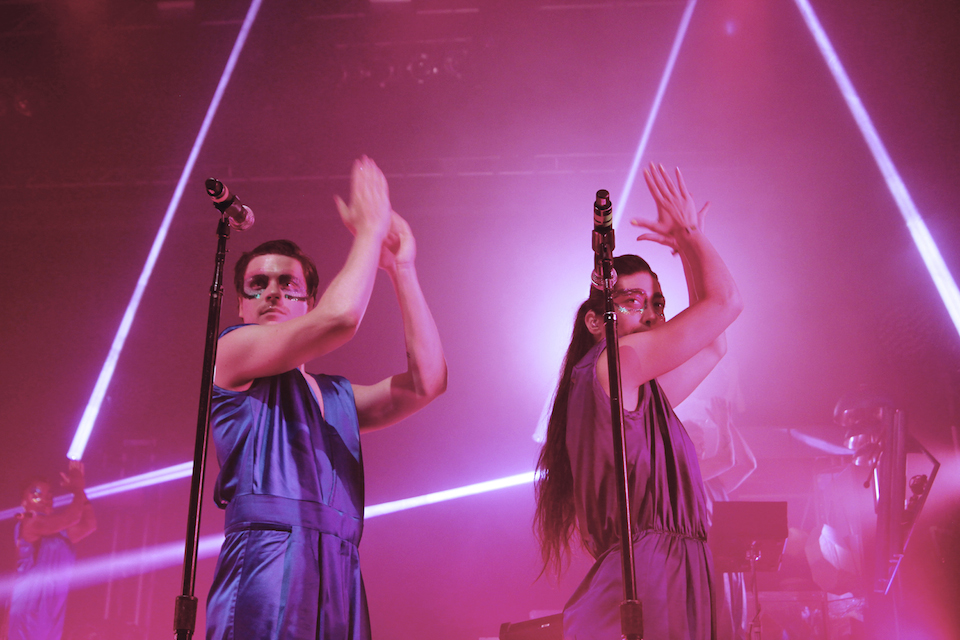 While an ongoing dispute with their old label Brille Records is keeping The Knife from releasing their new live album in most major territories, the duo just unveiled an uncut video from their Terminal 5 show. Available below, it captures their final creative statement: a musical of sorts, led by a dance troupe, blinding lights, and lots of costume changes.

“In the process of making Shaking The Habitual,” the Dreijer siblings explained in a press release, “we realized that it was time for us to question the concept of The Knife in a wider sense. Or, rather, we wanted to challenge the idea of The Knife that had been created somehow. We needed to find a way to do and be what we wanted, taking the commercial dimension of The Knife into account only to be able to find ways to exist outside of it. For instance, we realized that the masks we used to wear in press photographs as a way to criticize the media’s obsession with the individuals behind the music had started to be seen as the opposite: as our brand or trademark, and as something mystical. The discussion of purpose and joyfulness started all over again, this time in relation to whether or not to perform the album.”

“Concerts are boring, but dancing is fun,” added close friend Kim Einarsson. “Instead of reproducing the stereotypical way of performing electronic music—two people behind a laptop—maybe you should be dancing to it.” To pull off such a major creative leap—The Knife aren’t exactly trained ballet dancers—Einarsson and Anna Efraimsson joined forces as creative coordinators for the performance art piece alongside choreographer Stina Nyberg. “We decided that we wanted the show to be a collective effort both as process and outcome,” the Knife said, “meaning that everyone in the team would be involved from the outset. We started to consider ourselves as an amoeba—a type of single-celled organism that has the ability to alter its shape and that for practical reasons team up with other cells or organisms, no matter how different—and we searched for ways to communicate that feeling to the audience. We quickly came to the conclusion that in order to do so, we would all have to play the roles not only of dancers, but also of singers and musicians, performing as one shifting unity.

They continued, “To make everyone comfortable with the different elements of the performance, we took singing lessons together, focusing on making interesting sounds rather than finding exact pitches. We also taught each other dance moves, inspired by everything from Broadway musicals to Bollywood, in ways that made it possible for all of us to participate. We wanted the audience to have fun, too, and to dance alongside us, so we made more fun and dance-friendly versions of the songs from the album and some older songs.”

Designer Bella Rune also created special instruments for the show so that fans would have more to look at than a bunch of buttons and knobs. They’ll all be auctioned off starting tomorrow at 3 p.m. Knife time, with all proceeds going to the No One Is Illegal Network, a charity for undocumented workers who have had their asylum applications denied. Here’s a look at three of them, followed by the show itself….