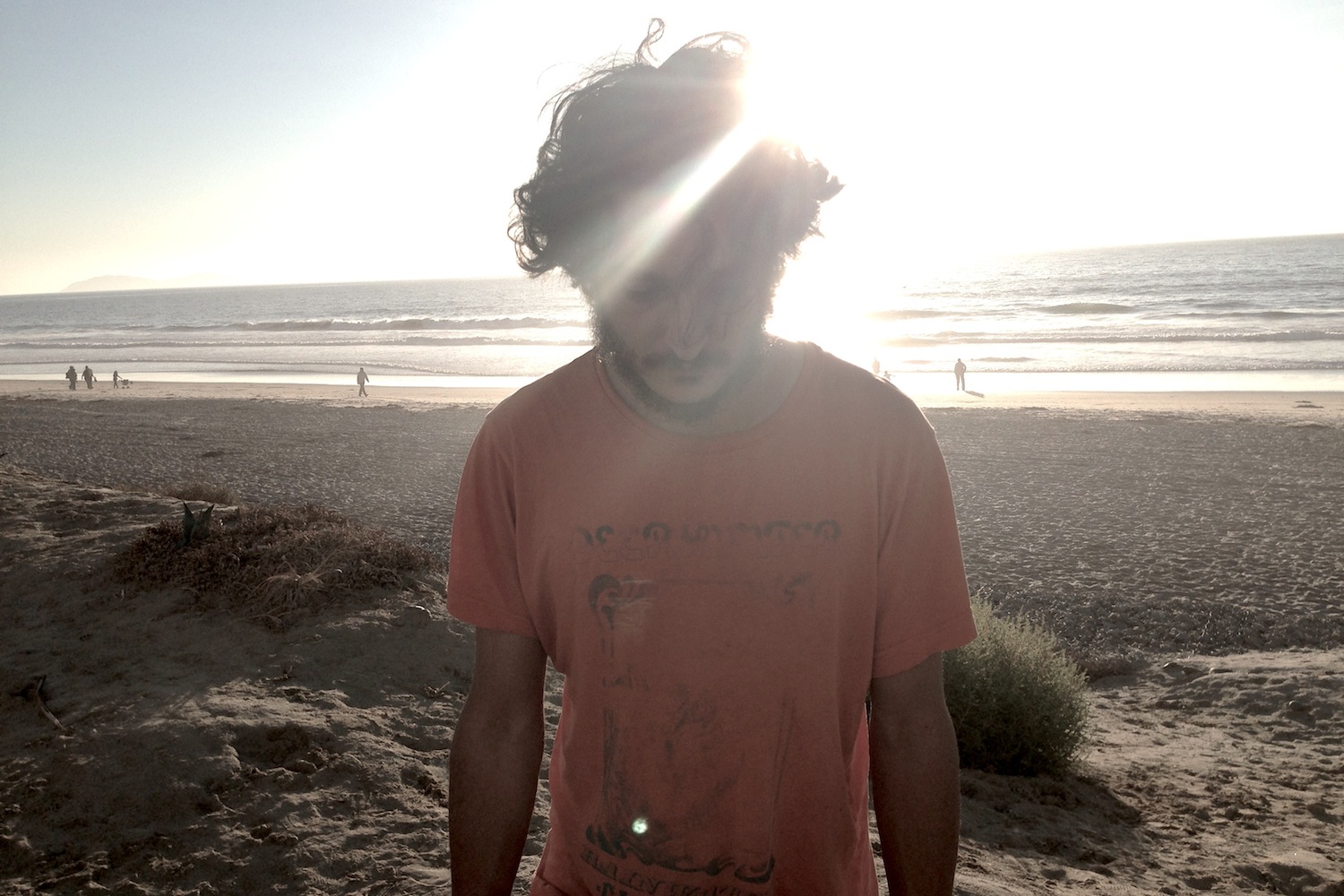 Contrary to popular lore—cough… Pitchfork… cough—White Rainbow’s Adam Forkner hasn’t “taken a break” since 2009’s New Clouds. He hasn’t been “on hiatus” either. The producer/multi-instrumentalist has been in the shadows instead, exploring and expanding his sound palate outside pop circles and whatever this week’s trend happens to be. Here’s a primer for those who haven’t been keeping up with the nearly 20 digital records he’s self-released over the past five years…

“Sky’s Position (For Tom Blood)”
The year 2010. Originally a cassette on Gnar Tapes. (Run by the White Fang kids, who are now all up on that Burger Records tip.) It sold out quickly, so I put that shit up on Bandcamp. This song is made for my friend, the poet Tom Blood. It is inspired by his book The Sky Position, which is a very good collection of poems that float by like clouds or a stoned walk around Portland in the fall, winter, spring or summer. The book won the Oregon Book Award for poetry when it came out. It is also the first of many books published by Marriage Records, which is family to me.

The sound of the music is ambient style with guitar swells and a calming meditative effect. This is what people wish White Rainbow sounded like all the time. This and the rest of Sea Thru is stuff that I made around the time of New Clouds (2008-10) that didn’t make it onto that album.

“A Secret Loft Party 10/9/2010”
The PA was big, totally out of phase and teetering on being completely broken. Whatever. Some bands I didn’t know were playing. Some asian dude in a captain’s hat. Things like that. I didn’t know anybody at the party. I forget who even got me the show. I played first, in front of the keg. Whatever.

This is not what people wish White Rainbow sounded like, but it has sounded more like this than pretty, smooth ambient music at most shows since 2008 or 9, and on this release O finally showcase some of the heavy beat stuff that my sets were exploring, you can hear the hip-hop samples, the deep Rob Walmart crippled-beat influence, mixed with me still making lots of loops on my FX pedals. My synth, voice and drum machine are the source of all the sounds and beats.

“Dr Pizza’s Spectral Retreat and Event Center”
The great thing about digital releases is the songs can be as long as you want. People tend to like this 43-minute ambient record. Here’s how I described it originally…

“Dr Pizza’s Spectral Retreat and Event Center is a virtual spiritual meditation retreat that you can go to any time, anywhere! Just put on some headphones or play this through a nice stereo to be transported to Dr Pizza’s very special zone.

Over 40 minutes of continuous ambient cloud-bath! Extremely mellow, drifting and beatless! Specifically harmonically tuned by Dr Pizza himself for the purest spectrum of vibrations! etc etc

“From Now On Let’s”
In May 2011, I released From Now On Let’s, a collection of beat-oriented material that people didn’t want to hear from the guy who gave them 40-minute ambient bathtub soundtracks. “From Now On Let’s” includes a sample of a Billy Cobham song, written by the bassist on the Cobham record whose Wikipedia page says he used to play with Sun Ra. Somewhere on the internet is a guy “finger tutting”—a.k.a. breakdancing which is done with your fingers—to this song. It was a hit among friends and fans.

“Raw Shanks a Million”
This song is maybe the coolest one from the same album, as it still has weird looping—like what people who knew me from the 2008 era might remember—but with beats, vocal drifts, synths. It even has phony Fripp/Belew interguitarlocking bullshit. It’s a good creeper of a track.

“Fiesta Forever”
January 30, 2012. I released this silly collection of beats that I had been making but never finished called ????INFINITY•BEAT•TAPE?????. I was at a real crossroads musically. I hadn’t toured the country in a few years; I was really not interested in continuing to make a bunch of ambient music. I was totally bored of loop pedals and guitars. I was playing synths and making beats for a very silly R&B party band called Purple & Green, which started as a joke or a dare. I was playing every week in Rob Walmart, which is a bunch of dudes who do not give one shit about music, if it sounds terrible, or if hours go by where you are jamming and it is just complete shit. This track, more than any of the most mediocre stuff on that record, exemplifies my use of classic breakbeats, my ability to solo like crazy on a synth, and it feels like it has some samba elements or something.

This is not the White Rainbow people wanted to hear.

“Trick Shot Arranger”
June 2012. I got into the groove with this bubble sound and nasty clap electro boogie groove and let that shit ride for like 20 minutes because it felt good. Real nasty fake fuzz guitar solo sounds played on a synth; when I played this song live a few times I played nasty fake MIDI sax solos.

“Customer Service // Call Center Parking Lot”
In early 2012 I started sending some unreleased, more beat-oriented songs to a potential label partner to let them know I was working on a new record. The reply I got was that they wanted to hear more “drifts” and ambient stuff. Feeling miffed, I whipped out one shitty guitar pedal, one looper pedal, and one synth and the GarageBand app on my iPad and recorded over an hour of bullshit string swells and faux-modular synth bleeps and bloops, and titled the resulting tracks really overly-serious/banal cliché indie-ambient titles and sent it in to the label. Just to fuck with them a lil’. I thought it was funny. The whole joke took all of three hours.

A few months later, when I was totally broke and desperate for rent money, I released this ambient piss-take music on Bandcamp to little fanfare. The original title of the album was Dying Alone in the Desert at the End of the Movie About Your Pathetic Existence. I renamed it The Contemplator.

“Reeses Delux Stack Fever Dream Theory Version”
By the end of 2012, the small audience that I built up in the late ’00s on Kranky and through tours with famous indie bands or whatever was pretty much nonexistent, except for lifer friends and a few stragglers. Most people knew one small, very public sliver of my music and it was growing more and more frustrating to see them get so confused when I hit them over the head with weird synth solos or whatever the fuck. For this and other personal reasons, I grew increasingly depressed.

In need of some sort of direction or change in my life, I suddenly and arbitrarily moved to Los Angeles. I couldn’t find a job or an affordable place to live. I found a cheap room in this house with a group of young experimental musicians that I didn’t know. I felt old and out of place and I wasn’t interested in smoking weed and listening to DJ Rashad mixtapes until 4 a.m. I lived there for almost a year. Things grew tense.

I didn’t have my own recording studio I could go and make music in. My production slowed down. I started working on stuff that became THRU.U during stints house-sitting for friends with nicer places than my own. This song from Sand Quality and Every Answer could be the soundtrack to this confusing, rough time.

Which leads us up to THRU.U, a collection of songs I’ve been woodshedding and developing for a more “proper” release for a couple years now. I’m excited that it’s coming out.