BREAKING: An Interview With … Charli XCX 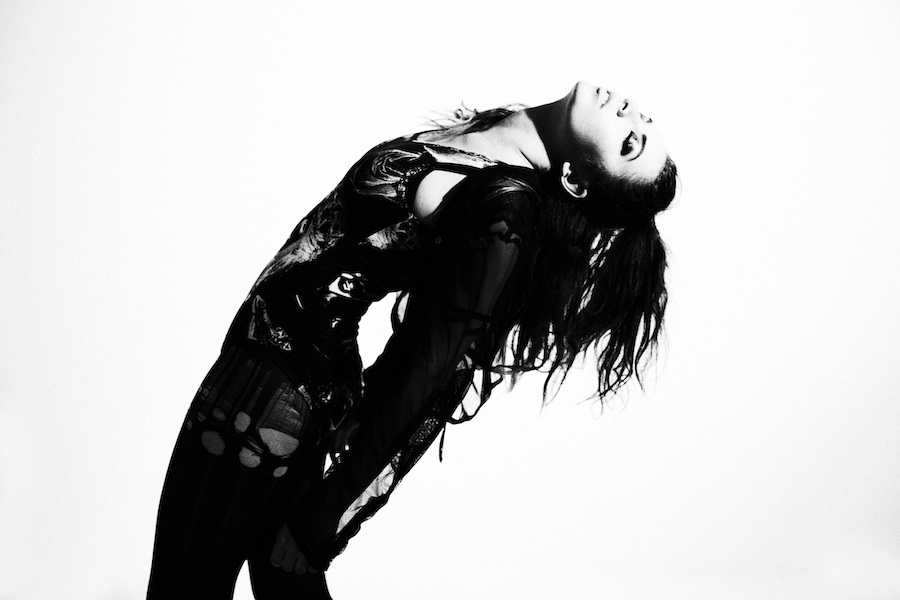 When listening to Charli XCX’s limited goth-pop output, one would assume she’s a child of the ’80s, yet Charlotte Aitchison missed that decade entirely by two years. And the frizzy haired British ingÃ©nue makes no apologies about nostalgia for times never experienced firsthand, either.

But then again, just about everything Charli does is unapologetic. During our interview, for example, she eats two slices of exceptionally cheesy pizza while carrying on a completely cohesive conversation about her spotlight-seizing stage outfits (midriff-baring belly shirts, catsuits, an earlobe-latched nose piercing that’s drawn blood before), epiletic dance moves, and the seemingly embarrassing songs she wrote and recorded as an adolescent, â€œ!Franchesckaar!â€ and â€œI Wanna Be Darth Vader.”

â€œThe expectations [based on those songs] were so low,â€ explains Charli, â€œthat the new stuff will really impress them.â€

By “the new stuff,” she means the mixtape (Heartbreaks and Earthquakes) and EP (You’re the One) that dropped this week. Here’s the full breakdown…

Well, that’s nice of you to ask.
Why, thank you.

You grew up where?
In a place outside of London, countryside, middle class poshness. Not a great music scene.

Were your parents artistic?
My dad was a small time club promoter back in the day. He booked Marley and the Wailers, and like Siouxsie Sioux, and he did the promoting for quite some time, but my exposure to music was limited. When I was born, he stopped doing the rock thing and became a stamp collector.

Bad ass.
Oh, yeah. Stamps are rock ‘n’ roll. So I grew up there and would write music in my bedroom, putting stuff up on MySpace under the Charli XCX name.

So that name was a young girl’s idea? It stands for â€œKiss Charli Kiss?â€
Yeah, but I’m not embarrassed by it and I think it looks amazing on T-shirts. At the time I thought it looked super cool, but when I got signed to my label, I suggested that maybe I should change my name to Charli X-rated Cunt X-rated:they were freaking out, like, who did we sign?

What were you like as a kid considering you started making music when you were 7?
Shit music, I should say. I was basically a massive attention whore. That’s attention and whore together. Not a whore, separately:I was a massive attention seeker, rather. I would do this Spice Girls cover band. I kind of persuaded my friends to each be a Spice Girl.

I read somewhere that you were always Scary?
Yeah, but I always wanted to be Baby.

What’s wrong with Scary?
I’m totally there now. She’s awesome. You know, Baby Spice had an amazing solo album. It was like ’60s era-inspired. [Starts singing] I met her at the Driscoll the other week and I did not play it cool. I was like, can I touch you? I think you’re so cool. When I actually said goodbye to her, I actually said to her â€œGirl power.â€ Seriously.

What was she like?
Really sweet. I’d say that she is like a good whiskey that’s gotten better with age.

I don’t mind the Spice Girls. I even like a few songs.
I used to be embarrassed but you know what? They inspired so many girls to be pop stars. I’m still embarrassed about loving Aqua though [starts singing â€œBarbie Girlâ€].

You gravitated to a lot of sunshiny pop as a younger girl? Why do the dark thing now?
I think I’m very chatty and happy, but I spend a lot of time on my own, too. When I make music, I’m very in a zone and focused. You know, you actually remind me of the guy I worked on the new record with:it’s uncanny. Like I can’t focus.

Do you know T’Pau’s â€œHeart & Soul?â€
Oh, gosh yes. Everyone says T’Pau, and Martika. I’ve totally heard this before.

Do you follow music past the year 2000?
I just did an interview recently and they asked me who my favorite New York bands are, and I’m like, beyond the Strokes:? I’m not sure.

Were you born in the wrong decade?
I was born in the ’90s and that’s the perfect decade for me–half bubblegum pop, and half depressing grunge. That’s me. Like perfectly described.

Yet your sadder half dominates the lyrical content?
On the record, the happier half does come out.

I do have to say though that â€œI Want To Be Darth Vaderâ€ is kind of silly.
I was 14 when I wrote that. In the East London illegal raves that I was performing at, they didn’t care what I was saying. They wanted a wonky bass line. Now, I don’t want to do that shit any more. I want to make an amazing record, and a lot of people missed the journey. There’s a lot of shit online that I wrote as a tween.

Does it embarrass you?
I know songs like â€œFrancescaâ€ are not my finest hour. I think that it also works to my advantage–people who knew my earlier stuff were like, wow, that’s rubbish. The expectations were so low that the new stuff will really impress them.

Do you find it weird that poppy music like yours is being promoted by websites like Pitchfork?
Well, no. I don’t think they’re throwaway songs. I think the last five years, pop music all sounds like Dr. Luke took a big shit. It’s about being in a club, and being cool. But I think people are acknowledging my wanting to make pop music but making it a bit more substantive.

Is the new album done?
Yes, it’s all recorded and there are like 15 songs to choose from.

Being that you’ve been working on music for so many years–since you were 7–is this how you thought it would turn out?
Yes, to be honest. It was only after last April that things started turning around. I thought I was stuck in a rut. But then â€œStay Awayâ€ came out and changed things around. Everything just snowballed.

You were being interviewed as early as 2009. I read something about you in Interview magazine back then:
A lot of people thought I was going to blow up based on my early singles. And I’m glad that I didn’t. I think that press was reacting more to my look–I was wearing cat suits–than about the music.

I’d like to talk to you about fashion for a minute. Who are your style icons and role models?
Girl power. [Laughs]

I want to shop there.
It’s a good shop.

Does Nirvana mean anything to you?
My boyfriend is way more clued in to Nirvana than I am. I know just the hits really. But I knew Cobain was a genius. That much I can acknowledge.

What’s it like always being on the road as a 19 year old?
I love it. If I get bored or homesick, I’ll bring people along with me. I went to art school and recently dropped out:I might go back next year and settle down in one place for a bit. It wasn’t totally for me. But my friends know me as being the one who wants to do music. I did enjoy school while I was there, but I feel way more comfortable making music.

Is there ever a point when you feel I want to be just a regular person?
Yeah, when my friends are going and I have a gig to do. But my boyfriend is a film director and it’s really starting to happen for him, and we have friends in fashion in which things are happening for them too. I think we’re surrounded by people who live this lifestyle. For someone young like me, it’s really fun. I don’t have to worry about being Madonna yet. It’s just my start.

Speaking of, the New York Times recently compared you to being a Madonna/Siouxsie Sioux hybrid.
Siouxsie is my hero. But I was never like, huge on Madonna. Quite a few people say the Madonna/Lady Gaga thing and I don’t quite get that comparison.

What was the first time you heard a song and you felt like you needed to be a musician?
Honestly? Britney Spears’ â€œHit Me Baby One More Time.â€ She seemed just so fabulous and sexy and cool for someone my age then. I got the pink hair tie even. When I was getting into the Knife later on, I realized I wanted to make music like that. The Fever Ray record too:I wanted to be seen partially in the same world as them, the same category. I love Zola Jesus. I love Grimes.

That Grimes record is wonderful.
I actually interviewed her once for a â€˜zine and she was super nice. I don’t think she knew then who I was. Ha. I mentioned that she sounded like Cocteau Twins and she was like, no, I aspire to sound like Destiny’s Child and Mariah Carey. I liked that.

One of your songs was remixed by Salem.
I love them.

I loathe them.
I don’t mean this to be patronizing, but it’s an acquired taste. You love it or you hate it. I love their record. It’s a great driving record. Put it in your car at night and drive really fast.

Off a cliff?
[Laughs] It’s hip-hop for goths. I like the whole scene–the cult imagery, the upside down crosses. I love witch house. Yes, it takes itself too seriously: I went to one of those parties and it had diagrams on the walls. It’s become a little bit comedic. I still like it, though.

You mention in certain interviews about how you don’t want to be a Lady Gaga character:
Don’t get me wrong. She’s an icon and she has a great thing, but my one beef is that she owns this image and no one else is able to do anything remotely like that without being compared to her. It’s a plus and a minus for artists like me, because she wore something crazy or said something crazy then it’s like, ‘Oh, the Lady Gaga bandwagon continues.’ I feel like I hear that sometimes about me.

Do you think it’s harder for young ladies to find a niche and be more distinctive?
Definitely. It’s much harder for girls to establish a distinct role. Everything we do tends to be misconstrued as sexy.

Is your music sexy?
Some guys find me repulsive because of the way I act, and dress. I’m not super skinny, and I wear thick eyelashes. But I guess some guys are into my look and think I could be sexy. But no, I don’t aim to be sexy.

The New York Times also made mention of you wearing a midriff shirt.
It wasn’t a sexy intent. I didn’t do it to grab a headline. I love crop-tops. I have a whole bunch of them. If that’s news, well:

There’s been mention of you looking like an aerobics instructor on stage.
Ha ha. That’s my next project. An aerobics video.