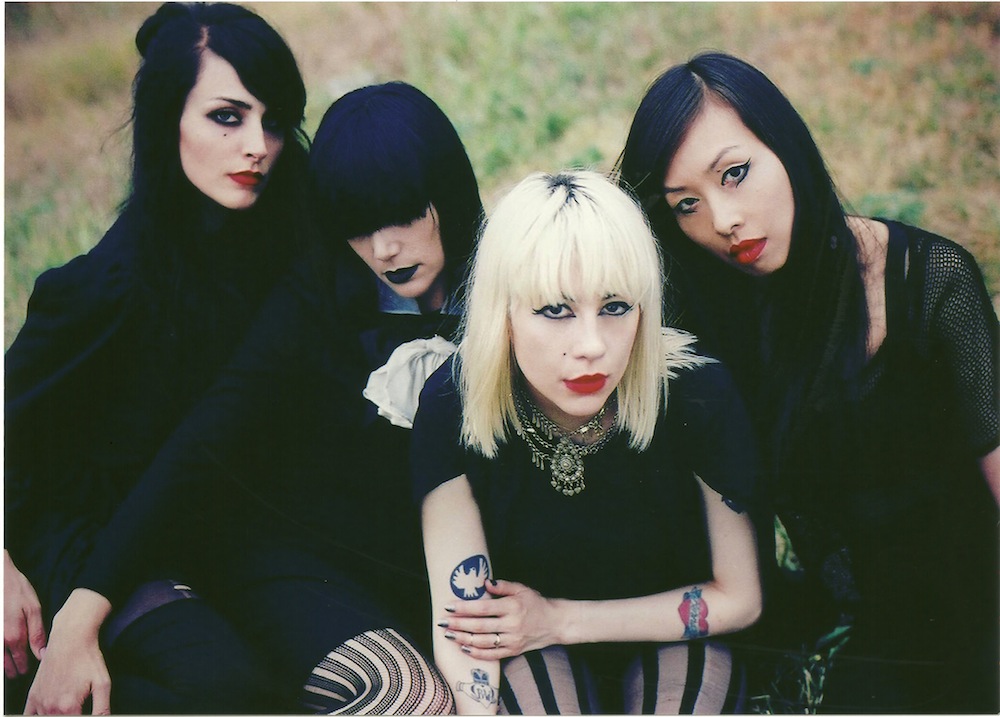 There’s no word yet on when we might actually hear it, but Dum Dum Girls frontwoman Dee Dee Penny has written a long open letter to fans about the band’s next album, which was apparently written a year ago and wrapped recently, with a bout of blown vocal cords somewhere in between. Check out the details below, along with a shareable version of our cover story from a few years back…

One year ago nearly to the day, I locked out the world and sat down in my apartment — one free week to write a new record. Clear view of the New York sky as framed by iron window guards, clear view of what I needed to do, though no specifics to guide me.

It was a brief respite from touring and it was non-negotiable to use the time productively. It was a challenge I’d issued and accepted over the last few months, and like all compulsive minds, I was waiting with baited breath (“and whispering humbleness”) to let the muse loose.

I have always lived predominantly in my head but it is these rare moments of stepping outside, to create things tangible to others, that I find truly transcendent.

I was reminded of that letter the hero of so many of us, Nick Cave, had written to MTV. His gentle worship and protection of his creative process, his crowned Inspiration. Do yourself a favor and read it hear if you’ve never: http://www.nick-cave.com/mtv/mtv.shtml

Anyhow, I had written and recorded at least ten songs before this heralded week, but was convinced they were only placeholders; nice exercises in experience and sound, but not the next message. So sitting down at my makeshift desk, I had little direct intention, just the drive toward newness. I would hope you know me well enough by now to know I’m ever seeking forward.

My recipe of marijuana and coffee has served me well for the entire recorded catalogue of Dum Dum Girls, and so I didn’t deter. I lived in a sparkling haze for seven days, in an apartment in the sky, and when I emerged from the frenzy, indeed ten new songs came with me.

A few months later I ran away to Hollywood to write the last three songs. I harbored a tall pile of books; topics I’d been obsessed with, words that had resonated so deeply with me they felt like artistic collaborators. Rilke, Nin, Rimbaud, Verlaine, Baudelaire. An admittedly unhealthy obsession with the visual components of the Surrealists’ manifesto of desire.

Here it was spelled out for me: DESIRE as muse.

Months later, again in the brief breaks of travel, I again returned to Hollywood to record among the Pet Sounds ghosts at East West Studios, in pursuit of a bigger, darker, more urgent sound. Sitting in the room with my favorite team of Richard Gottherer, Sune Rose Wagner, and Alonzo Vargas, the music came easily and quickly.

Unfortunately, karma take it or leave it, I had to confront the reality that my voice was destroyed from the last few years of constant touring. It is a much longer and quite boring story, but in short, it was devastating and demanded a severe detour from the future I’d planned.

Most of the time I feel my work creates itself; it is that classic out-of-body experience I know a lot of other artists relate to. It is me, but it is also in possession of me. I go back in the twilight afterward and evaluate, smooth or rough its edges, and commit to using pop music as a platform for something more.

It is not pretentious to feel and create. So much of my life has been defined and aided by art, music specifically, that I am honored to give my best attempt, and I am honored that you listen.

I cannot wait to release this record, whose name has yet to make itself known, and really, I just want you to close your eyes and dance into the night, which as Patti Smith sings, belongs to us.

Stay tuned for a slow release of some related visual projects dreamt up by Tamaryn … your first tastes.