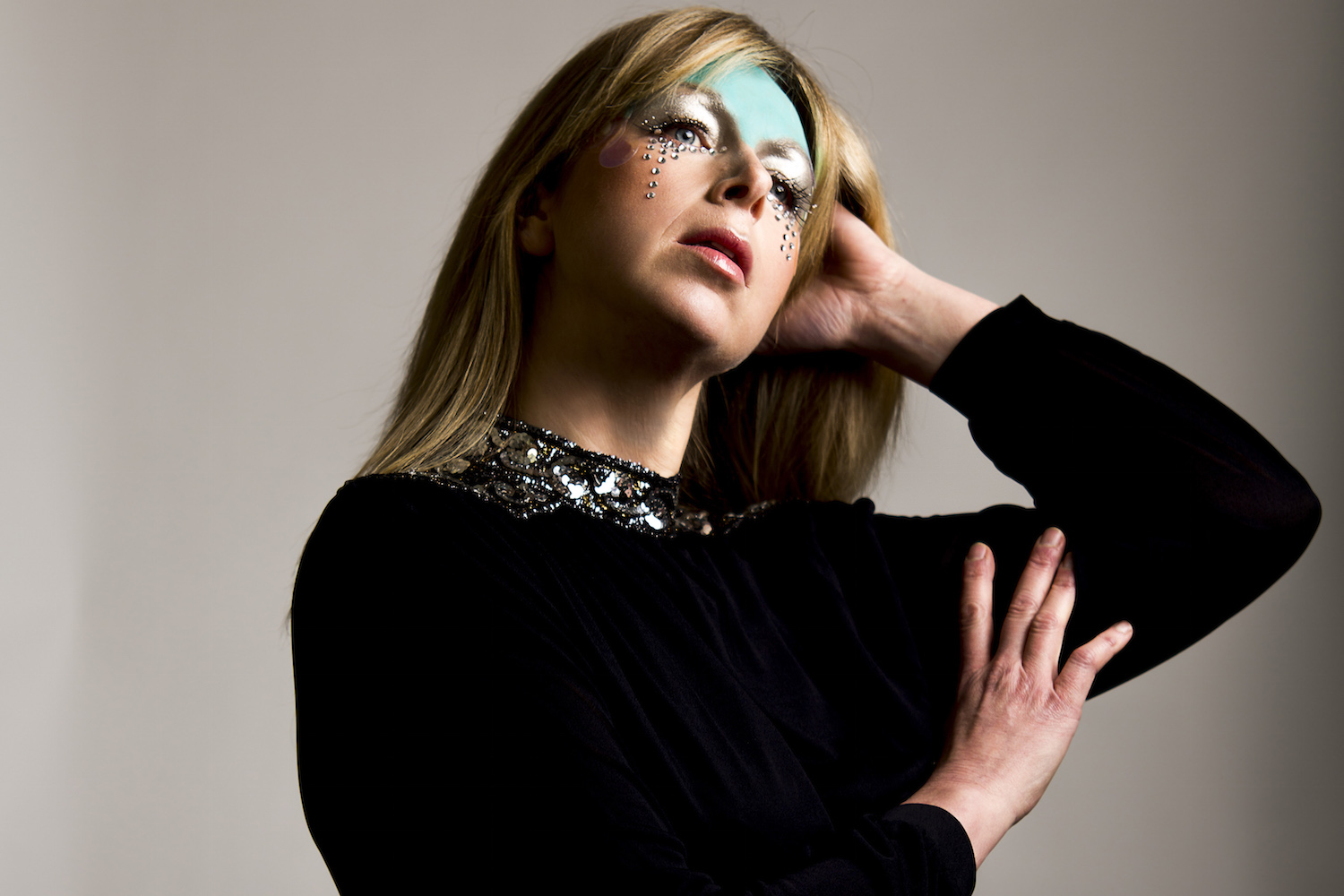 Now that her rightfully acclaimed The Silver Globe album has finally released a proper stateside release—complete with a bonus record of previously unreleased material—we thought we’d ask Jane Weaver the stories behind its spellbound songs. Turns out they’re steeped in more than just laser-guided synth lines, acid-drenched folk melodies, and heady pop hooks; try everything from dust-sheathed Disney soundtracks to the ticking time clock that is our own mortality…

“ARGENT”
I think “Argent” was the song that decided the direction of the album. It was important for me to maintain the same driving rhythm throughout but have chaotic noises like meteor showers! “Argent” in my head was visualized as a big shiny silver planet I was trying to reach. I was questioning the ever-changing industry and landscape around me; what does the future hold for us creatively?

I used a lot of synths and keyboards on this record. The rhythm is pretty motorik and simple but there’s a lot going on. It’s a bit chaotic in places but I just kept layering up. I used a Roland Guitar synth throughout once owned by the rock band Status Quo, which is a pretty powerful thing on both levels! It’s also a bit hit or miss and uncontrollable but has its own charm.

“THE ELECTRIC MOUNTAIN”
I grew up in a chemical town between Liverpool and Manchester. At night the chemical plants looked like huge industrial cities beautifully lit. The Electric Mountain actually exists and is a disused power station inside a mountain in Bethesda North Wales; it has this post-apocalyptic feel about it.

I was writing “EM” and wanted to sample a drum machine loop. I found the perfect match in “Star Cannibal” off Church of Hawkwind. The album is more or less described as a solo project by Dave Brock from Hawkwind and it’s one of my favorite records from when I was 17.

I could’ve tried to replicate something similar but felt it was important for people to hear how great “Star Cannibal” is. I included some of the backing and looped it; I had to ask permission off Dave Brock and it was all fine. At the same time, my husband’s record label, Finders Keepers, was involved in a dispute with Jay Z because one of their artists’ songs was sampled on his album without permission. Then I had an out of the blue phone call from Coldplay, who had sampled one of my songs for their latest album! All pretty weird goings on… but it came good in the end. Sample culture is totally fine but you have to ask if it’s ok with the person whose art you are borrowing.

“ARROWS
“Arrows” was the first song I recorded for the album. I was in LA doing stuff; my friend, the film composer and producer David Holmes, was living there at the time and recording at Woody Jackson’s Vox Recording Studios. Andy [Votel] suggested David and I work together. Vox is a really inspirational place and holds lots of cool and unusual gear. We used the drum backing from my original demo—which sounded pretty rough—but we layered the music using an Orchestron and a RMI synth, which have pretty distinctive sounds. I wanted the lyrics to be simple, like a poem or repeated mantra. Woody added a brooding Joy Division-esque bass to this which has lots of space in it. David is great. I don’t normally work with producers and he’s pretty blunt, if he doesn’t like something or feels it’s not working he’ll say so!

We used lots of taped echo and effects on the vocal. From a distance now, it’s maybe a subconscious homage to Trish Keenan from Broadcast. I was lucky enough to be acquainted with her through my husband Andy and she had recently and tragically passed away. Such a loss.

“DON’T TAKE MY SOUL”
The backing to this was an idea I had years ago. At the time, my friend and bandmate Dave Tyack heard it, said “that’s ridiculous!”, and laughed as it sounded like some absurd circus song.

Tragically Dave passed away not long after this whilst on holiday in Corsica so I didn’t look at it again. I found the tape a few years ago and it made me think of him laughing at it. I wrote “Don’t Take My Soul” as a double-edged cold funk track, as I think it’s lyrically quite dark. I asked Damon Gough, a.k.a. Badly Drawn Boy, to play the guitar riff; he used the Status Quo guitar synth and managed to control it better than I did! I recorded it in Eve Studios and it’s based around a loop. I used a Roland string synth which is a favorite and has a Jean Michel Jarre power about it. I also used tubular bells towards the end. I was visualizing being alone and searching for someone in a vast landscape. We are all just cells, fighting for existence and a place. The feeling that we can never be truly in control of anything, the ignorance and greed of man, the eventual fallout and destruction of the planet because of war or natural disasters because we aren’t looking after what we’ve been given.

“MISSION DESIRE”
“Mission Desire” is based on the love/hate relationship you can have with your own creativity; the desire never really ceases, but the relationship is turbulent. It’s sung as a love song and like something has a power over you—a sense of longing that stops you dead in your tracks.

I recorded this in two studios: 80 Hertz and Eve Studios, both in Manchester. I did a lot of layering once the backing was done and the guitarist Pete used lots of amazing volume pedal and synth-like guitar effects throughout. I also made him do a Dave Gilmour-esque Pink Floyd guitar solo circa Dark Side of the Moon that I’d been hearing in my head but needed him to let rip! He wasn’t happy about this at first, but he’s an amazing guitarist and so I knew with some persuasion, he’d do it first take.

“STEALING GOLD”
This is the other song I recorded in LA at Vox with David Holmes. It has narcissistic themes about how people act in order to get what they want. I sang it like a lullaby and I wanted the backing to be hypnotic, entrancing. I’m comparing the person to a bird who is preening themselves and stealing cherished items to build a nest; it’s pretty standard in the entertainment industry.

We used lots of taped vocal effects on this. I was listening to Morricone’s Lizard in a Woman’s Skin [soundtrack]; I’m a big fan of Edda Dell’Orso and Malá Morská Víla by Liska. I had a tape of old Disney songs when I was a kid and I’ve always had a penchant for Disney’s choraled vocal stuff, like on Snow White and Alice in Wonderland. It gives me such a warm nostalgic feeling.

“IF ONLY WE COULD BE IN LOVE”
It took me three and a half years to record the album; I wasn’t sure if I’d ever finish it. I didn’t want to go in for 2-3 weeks solid and I was self-funding so it wasn’t really an option.

It wasn’t easy. We forget why we are pursuing something and why we love something. It was a bit of a struggle and so I suppose it’s reflective in the words. I’ve got this really old Bontempti organ; it doesn’t work properly and the rhythm keys make a ridiculous beat between a bossa nova and something else. I kept this from the original demo and built on top of it. It’s like a schmaltzy love song and whenever I sing it live, I feel it’s the slow dance number and I should be handing out roses to the audience.

https://youtu.be/LSUAAKFLoL0
“YOUR TIME IN THIS LIFE IS JUST TEMPORARY”
This is inspired by the futuristic film Logan’s Run… the Carousel. Once you reach 30, it’s curtains for you. It’s comparable to the entertainment industry, especially as a woman.

This was recorded at 80 hertz as more of a live backing track and then other tracking was done at Eve Studios. I wanted it to be like a Neil Young Harvest-era song, all recorded together in a barn. The artist BC Camplight is an amazing pianist and was recording his current album at the same time so I asked if he could play the piano over this. He did such a great job. I remember being in the studio singing this song about mortality and then my 15-year-old cat took ill and had to be put to sleep. I was crying like a 5 year old in the studio kitchen… they must’ve thought I was crazy!

Previous Liz
“When I Rule the World”
(Produced by SOPHIE)
Next In Memoriam:
Dieter Moebius