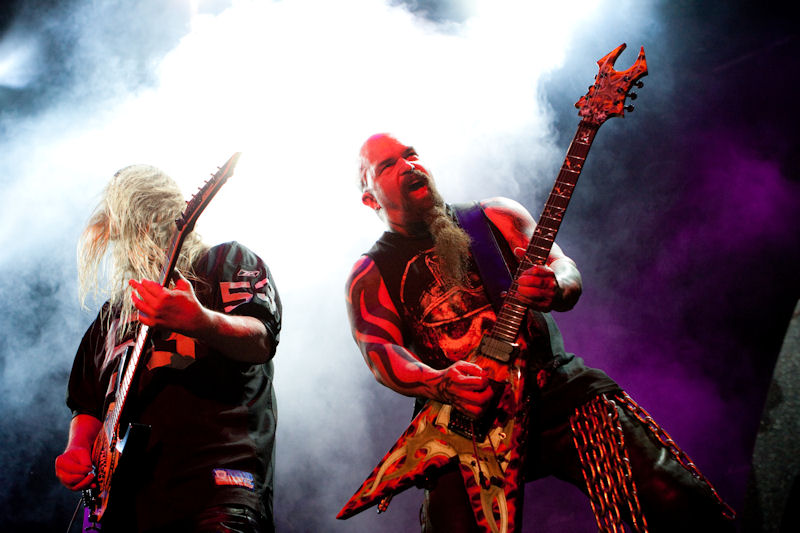 Slayer have issued a statement about the sudden passing of their longtime guitarist Jeff Hanneman. Here it is in full, via Facebook:

Slayer is devastated to inform that their bandmate and brother, Jeff Hanneman, passed away at about 11AM this morning near his Southern California home. Hanneman was in an area hospital when he suffered liver failure. He is survived by his wife Kathy, his sister Kathy and his brothers Michael and Larry, and will be sorely missed.

Hanneman had been struggling with the flesh-eating disease necrotizing fasciitis since early 2011, when a spider bite forced him to leave the band temporarily and start a long, painful rehabilitation process. Speaking to Metal Obsession a few months ago, lead guitarist Kerry King said he hadn’t “seen Jeff in forever” and that his replacement (Gary Holt of Exodus) was probably “in it for the long haul.” The band explained Hanneman’s condition in more detail last year, posting the following…

Slayer fans everywhere – it’s time to let you know what is going on with our brother Jeff Hanneman.

As you know, Jeff was bitten by a spider more than a year ago, but what you may not have known was that for a couple of days after he went to the ER, things were touch-and-go. There was talk that he might have to have his arm amputated, and we didn’t know if he was going to pull through at all. He was in a medically-induced coma for a few days and had several operations to remove the dead and dying tissue from his arm. So, understand, he was in really, really bad shape. It’s been about a year since he got out of the hospital, and since then, he had to learn to walk again, he’s had several painful skin grafts, he’s been in rehab doing exercises to regain the strength in his arm; but best of all, he’s been playing guitar. We were all excited when he joined us onstage for the encore a year ago at The Big Four show at Coachella. Since then, we’ve given him all the time and support he’s needed to continue his rehab so he can come back to the band fully recovered and able to deliver the kind of shows we all want him to. While Jeff’s been doing some writing and has been coming to rehearsal over the past several weeks, he has decided he needs to take more time to continue his rehab. While we want him back onstage with the band, all of us support his decision. So, we’re very grateful that Gary Holt will continue to fill in for Jeff, and will tour with us until Jeff completes his rehab and is ready to return. How long will that be? The best and most honest answer we can give you is ‘as long as it takes.’ We also wanted you to know that we’ve been doing some writing and recording for the next Slayer album – we’ve tracked a few songs, and will finish the album when we’re off the road later this year. Gary will join us on tour in Europe and the UK in May and June, and then we’ll all see you on this Summer’s Mayhem Festival.

Slayer are set to play a number of European dates this summer, and a South American one this fall. Check out a full rundown of dates here.