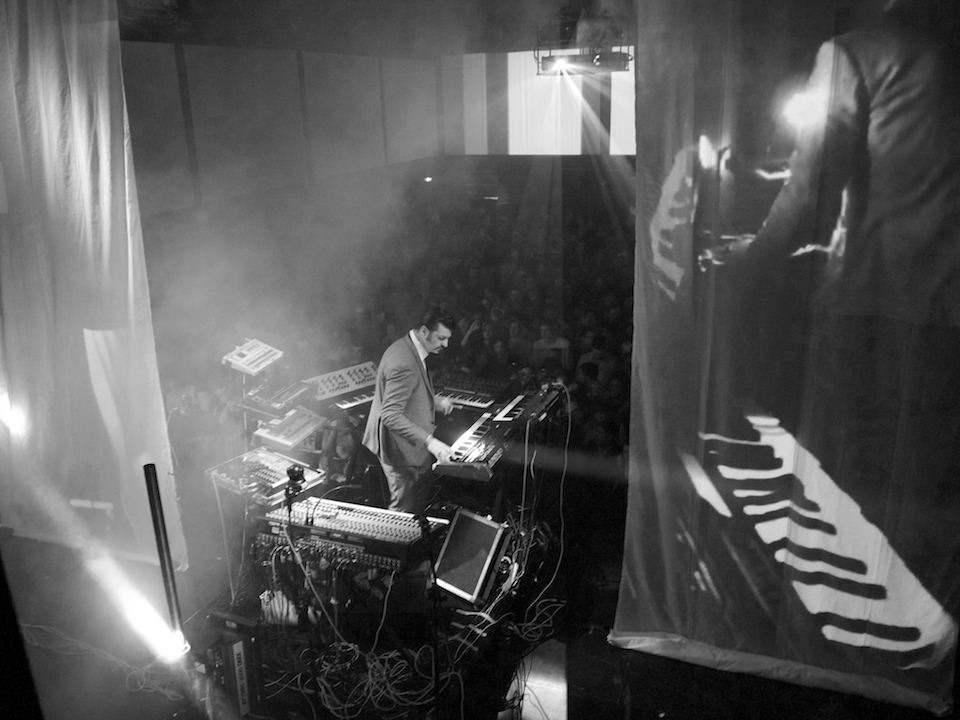 To this day, we find it strange that Black Strobe never truly broke in the U.S. beyond the former duo’s tight underground following. After all, they were doing the whole serrated synths thing well before Justice, and the spirit of their sound was more indebted to Depeche Mode and the dark side of dance music than any of the straight-up techno artists that remain alien to most stateside listeners.

Oh, well; maybe that’s why Ivan Smagghe moved on to curating French post-punk comps and aligning himself with Kill the DJ, one of our favorite German labels. As for Arnaud Rebotini (Black Strobe’s sole surviving member), he’s basically gone rogue with the Rebotini project and its analog-driven debut album, Music Components. Out today on Le Plan, it’s a celebration of simplicity, of the floor-filling reliability of Roland‘s, ARP‘s and Korg‘s. In the right hands, at least, and it doesn’t get much righter than this heavy-metal-loving Parisian–a towering dude who looks/acts like he could hang with Nick Cave and Carl Cox

We asked Arnaud to break down all of his wobbly love songs, as well as share a complete stream of the new record. Vintage synth addicts and recovering ravers, you’re gonna love this one…

“The Spirit of Boogie”
I always loved the word “boogie”–an amazing style/groove. The title here is a direct reference to the Kool & the Gang album Spirit of the Boogie. The song itself has a raw funky vibe that is influenced more by electro-funk classics than Kool & the Gang, per se, but it’s still in the spirit of boogie. In this, you can hear the Korg Mono/Poly in the bassline and the sequence, and the JX8P in the weird organ sounds.

“Un Cheval D’orgueil”
Named after a Pierre-Jakez HÃ©lias book, this was one of the first tracks I produced for this project. It was on the original live demo. The song is based on a TR-909 and TR-808 strong beat with shuffled hi-hats. The beat is influenced by early Richie Hawtin tracks such as [his] Hardtrax [alias]. The concept is to use simple elements to build a groove–two really simple basslines, one by the Juno-60 and one by the Mono/Poly, combined with a really simple SH-101 sequence. And at the end of the track, I add another ‘rave sequence’ done with the Mono/Poly.

“1314”
The track name comes from the pattern number I used on the 909 to program the beat. Towards the end, the SP-1200 is more present. This is a clear influence from Carl Craig‘s house project Parperclip People, and the bass is similar to early acid/trance records like the KLF. This track was on the original live demo, and I always play it at the end of my set as it’s a perfect closer.

As for hardware, you can hear the Juno-60 at its best. I then use this hypnotic bassline and modify it using the Juno’s classic resonant low pass and hi pass filters.

“Cm”
The title refers to the note C minor. The whole album is in this tone, which probably comes from the Cerrone album Love is C Minor. When I was a child, my father listened to that record all the time. In this track, I used the chord memory function ( you can memorize a chord and play it with one finger). It sounds like a typical old-school riff, like something Inner City would have used. It’s a deep, mellow track.

“The Swamp Waltz”
The title comes  from my taste for the Dixieland, and especialy New Orleans. For me, it’s the cradle of modern popular music–I’m a big fan of Cajun music and Zydeco. In this track, there’s a strong Mono/Poly bassline and I use a function I call “the knob that’s make people scream”! It was on the orginal demo and it’s always [played at] a peak time in the live set. This song is probably the one where you can most hear the Black Strobe influence, and at the end of the track there’s a lead influenced by Robert Wyatt‘s synth lead in “Seasong” on Rock Bottom. You can hear its influence on other tracks, too. “Horns of Innoncence”
This the last track I wrote for Music Components. When I begin an album, I know I’ll finish the production process with a central song that’s soft and experimental. It anchors the album. This kind of track comes naturally to me; it’s influenced by dubstep for the bassline and the beat, and there’s a interesting collision between the Jx-3P and the Pro one.

“Conakry Filter Sweep”
When I was making the album (and still now), I listened to a lot of ’70s Afrobeat. Some of those songs sound really psychedelic. This track is the result of hours and hours of listening to this kind of music. It’s like a drug; I’ve always been attracted by long progressive tracks. Originally, this one was 17 minutes long (!), but I edited it for the album.

“777”
It’s the seventh version of the seventh track I made for the album…Okay, that’s not true–it’s a sublimal 666. I’m a extreme metal fan so sometimes [that slips into my music]. This is the most clubby track on the album. You can hear the SH-101 at its best (the bass and the “pad”) on a strong shuffle beat. I tried to make it direct and simple.

“Decade of Aggression”
The title comes from Slayer’s live album, Decade of Aggression. Not their finest work, but it’s a really good title. I was trying to do a noisy track on the record, so that’s the result. There is secret hardware FX on this–the Electro Harmonix Micro Synthesizer. I used it to do the bassline from the 808 kickdrum, which is built for dancefloor.

“MNLL”
This track is named after MaNueLLa, my muse and my wife. It features another synth sound influenced by Robert Wyatt–here with the Mono/Poly solo at the end of the track. It’s also an homage to Detroit techno, and especially to Carl Craig. I feel it’s a perfect closing track for the album and it sums up what I wanted to do with this record.