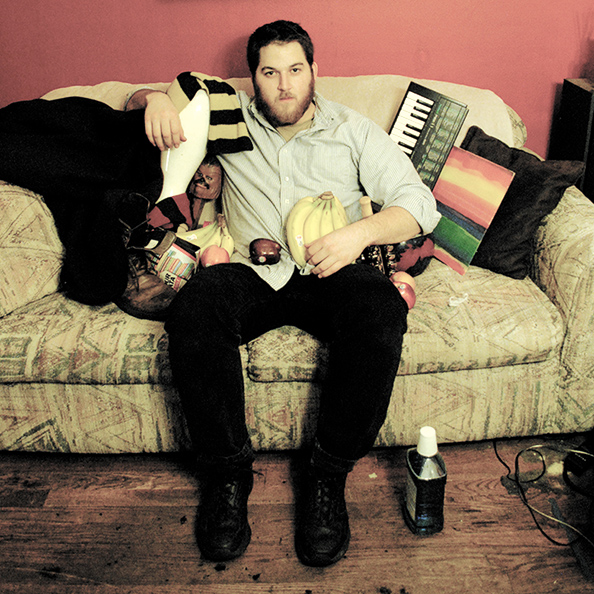 If you’re even remotely familiar with Samuel Goldberg‘s work in Radio People and the Emeralds side project Mist, then you know what to expect on the his latest mini-LP, Hazel (available now through Mexican Summer). At least on the surface, for beyond all of those shiny surfaces and lean synth lines lies a dynamic listen that pays tribute to the rich history of kosmische music.

Listen and learn below…

“Things can get dark in Cleveland”

I usually try not to automatically use the first realized piece as the introduction to my records. However, this ended up being the case for “Playground.” The track just feels like walking into the first day of junior high or something. It introduces the guitar zones that exist on Hazel. Even though there were guitars on my last record, a lot of folks didn’t hear it. I wanted this album to really reintroduce the different sounds that I had brought into the mix on my past two cassettes, Avalon and Leapt.

“A Vague Year” is one of the tracks that I have been playing live for the past year. I had performed the song for a few months before recording it. Every time I play it, it’s somehow a little bit more developed than the album version. This song came from tinkering with new equipment. It’s one of the only RP tracks that doesn’t really use my Korg Polysix as the source of the main sequence. Although, a few of my influences can be heard pretty clearly through the track, I think that I was listening to Ash Ra’s Blackouts and really tried to channel a similar sonic guitar sound.

“Blind Faith” was inspired by library jammers, namely Roger Roger. Can’t really hear that at all, though. Still, It could probably be a PSA jam in the year 2090. I’ve been playing this one live recently and a friend referred to the beat as “hip hop”, so sometimes when I jam it, I kind of imagine Busta Rhymes rapping over the first eight bars or something. Which is totally scary. Having that in your head when you perform is really distracting.

“The Maroon Lift” is a weird zone that came from a live improvisation I was doing in my studio towards the end of making this record. I think the original take is about three times as long, but I decided to make a uneasy mix of it to include on the album. I wanted to end the A-side with some woozy vibes.

“Anthem” is the droner on the record, for sure. I actually recorded a few different drone pieces and picked what I thought was the best one. John Elliott, who I collaborate with in Mist, plays on this one. He added the real beautifully understated low end and contributed the “music box” sequencer. I love to bring other people into recording projects because it ultimately will take the track somewhere else. On my last solo album, Having Had Forgot, I really showcased musical guests on each track. On Hazel, I knew that John would be a great person to have guest, because he’s got a real knack for placing colorful sounds that underline the jam but don’t derail the structure of the song.

“Walls in Motion” is a reference to an experience I had in New York recently where I couldn’t sleep after a gig. I was laying in bed staring at the ceiling, listening to the people in the apartment above; they were so loud that I couldn’t help but imagine everything going on up there. I was envisioning the clothes they were wearing, the way they looked, what they were saying to each other and the kind of people they were. The sounds were somewhere between making love, bowling and pacing back and forth. My eyes became so fixed on the ceiling, it was almost like I was trying to visually penetrate through the floor boards like Superman. As the people in the apartment above moved around it was if the ceiling itself was moving too, shifting underneath their steps.

The title track is actually another library-inspired jam, in a way,  because I wanted to make a piece of music that had a “human in space” vibe. There’s actually a track called “Boy on Space” by Douglas Wood that I conceptually borrowed from. Although the pieces, are not really alike, I often find that simple concepts like that can be the source of beautiful music. Also, the minimal qualities of this song make it so that each listen can be a bit different, focusing on certain voices at each time, or by following the beat.

“Reactionnaire” is the only previously released song on the record, a cut from my last cassette release, Avalon. I felt like it would be a nice bridge between two very drastically different zones. It was recorded while I was living in an apartment above one of the busiest streets on the east side of Cleveland. I wanted the synths at the end of the track to sound like a mix between cars passing and cars being sucked through a wormhole.

“Patience” is the only track with vocals that made the record. Unless they have has seen me perform live, most people don’t realize that vocals are actually a huge part of RP now and will undoubtedly be more present on recordings in the future. The song is about letting go of bad feelings for others. Things can get dark in Cleveland, you have to really have the ability to forgive and forget. Maybe that’s everywhere though?

Previous VIDEO: Watch Tom Waits’ Private Listening Party For ‘Bad As Me’
Next VIDEO: Florence + the Machine, “What the Water Gave Me”