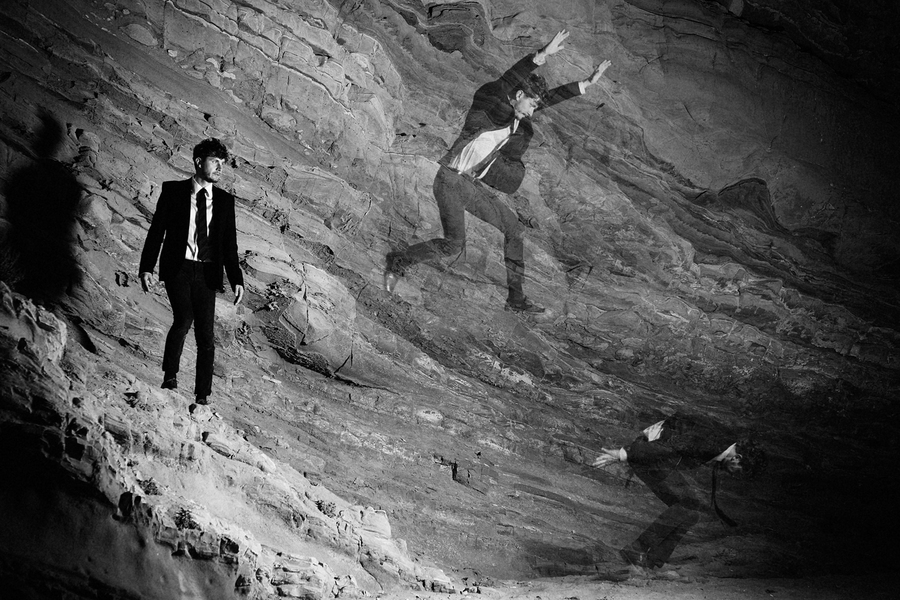 As if Bryan Hollon’s Neon Neon project wasn’t enough of an indication that the producer’s come a long way from the abstract hip-hop beats of his early Boom Bip records, the schizophrenic hooks of Zig Zaj hammer that point right home. In the following exclusive feature/full album stream, Hollon helps us make sense of everything from the tribal drone textures of “Tum Tum” to the melodramatic pop melodies of “New Order” (featuring Red Hot Chili Peppers guitarist Josh Klinghoffer and Empire of the Sun’s mildly insane frontman, Luke Steele)…

1. All Hands
I like to call this one my Wyatt-inspired track. There is a song by Robert Wyatt called “Life is Sheep” and the female vocals in it really got into my head. When I talked with Mike Noyce of Bon Iver about the track, I mentioned its haunting qualities and how I’d like to replicate that in some way. I also felt the song had a lost at sea quality, which he picked up on immediately. The pace and swing of the song somehow bring to mind the swaying of a boat at sea. Not really sure why that is but I’m all for it being a happy accident.

2. Goodbye Lover and Friends
This track took on so many different forms before it became what it is. I could probably release an album of just the early demos of this track. Josh Klinghoffer and I did an instrumental alternate version I’d like to release at some point. Its much more stripped down and tribal, and sounds like a lost Talking Heads b-side. Lyrically, I told Alex Kapranos to imagine he is in a sideshow performing magic tricks around the turn of the 19th century–lots of dark velvet curtains, rabbits and pigeons being pulled out of hats, and freaks lurking around the tent. The result is what you hear. I also see Aleister Crowley’s face when I hear this tune.

3. Pele
I have a deep love for surf rock and it seems to have reared its head in this song. I recorded this song in about three hours out of frustration with another track. I laid down the drums first, added metal percussion and taped up cymbals over top, tracked a simple bass line, added a synth or two, and finally the chorus guitar. The entire track was recording alone in the studio at about 3 a.m. Its basically a short burst of frustration and inspiration…a release if you will. It was never intended to be on the record but others told me I should put it on there.

4. Do As I Do
This was originally going to be an instrumental track but I sent it over to Cate to see if it inspired her at all. I really love her cadence in the verses on this track. Cate’s mood and tone is so great for a driving track like this. This track has the one and only sample used on the album. It’s slowed down to an unrecognizable speed, but I’m curious if anyone will ever actually hear what it is!

5. Reveal
“Reveal” was originally a 12-minute song. I had the hardest time cutting it down for a normal person’s attention span. At first I thought my album was going to be four 12-minute songs but I chickened out. If you could see the amount of tracks in this song, you would think I’m mental. It’s definitely one for the headphones and I promise you will hear something new and deeply embedded in it each time you listen. It’s got everything from whispers to street noise creating the atmosphere.

6. Manabozh
[Money] Mark and I were introduced to each other years ago by our mutual friend Danger Mouse. I had a huge appreciation for his work from way back in the day, with his Mark’s Keyboard Repair album and Check Your Head. I wanted Mark to get aggressive and go crazy with his collection of gadgets and pedals. The song is built around that harsh arpeggiated sound–created by the Korg MonoPoly–and was never really intended to be much more than an interlude. However, once I got that nasty lead synth through the guitar pedal tone, I got inspired to extend it. The dirty drums were created by using a Roland Dr. Sample in record mode for a mic in my dirty and wooden Echo Park studio. I got the Dr. Sample idea from Wayne Coyne of the Flaming Lips.

7. New Order
I could write a book on this track. Luke Steele and I got crazy with this one. It has so many layers and is incredibly dense, giving it an ’80s fantasy film-like quality, which is perfectly suitable to Luke and I. As many probably know, Empire of the Sun and Neon Neon were both deeply rooted in ’80s tones and structure. This was our chance to let the two worlds collide and to not hold back. My favorite part of the song is the insane modular synth solo that Josh Klinghoffer and I came up with. He ran his guitar through a huge AS modular system as I tweaked the controls. We got some intense tones that can never be replicated or pulled up again.

8. Automaton
Named after early robotics of the 18th century. Automatons were used in the early years of magic to give objects such as toys or dolls life-like movement. They used an incredibly intricate and complex set of gears and weights on the inside to create the movement. This track is the most syncopated and synth-y track on the album and it felt very robotic to me. Thus, the title.

9. Tumtum
I’m a huge fan of textures for inspiration. This song heavily uses the Elektron MonoMachine to provide layers of slow moving textures. After I had the layers, I went back with simple repetitive percussion to bring on a trance-inducing rhythm. Pieces like this have to be long in length to be effective, and for the mind to unwind it takes about four minutes of repetition. It takes at least six minutes to get lost in it. I shot for a Stars of the Lid style track and ended up with this.

10. Mascot and the Moth
Named after a very early magic trick where the magician makes a lady on stage disappear into a puff of smoke as he tries to embrace her. The track has a haunting sound bookending it that was created on a modular synth system by accident. I really wanted to use the sound on the album but it didn’t really stand up alone. I used an old Siel synth to created the melody over it and the rest just seemed to fall into place. I really like the bang of the drums on this one. I owe that drum sound to the magic of Chris Shaw, who mixed the album.