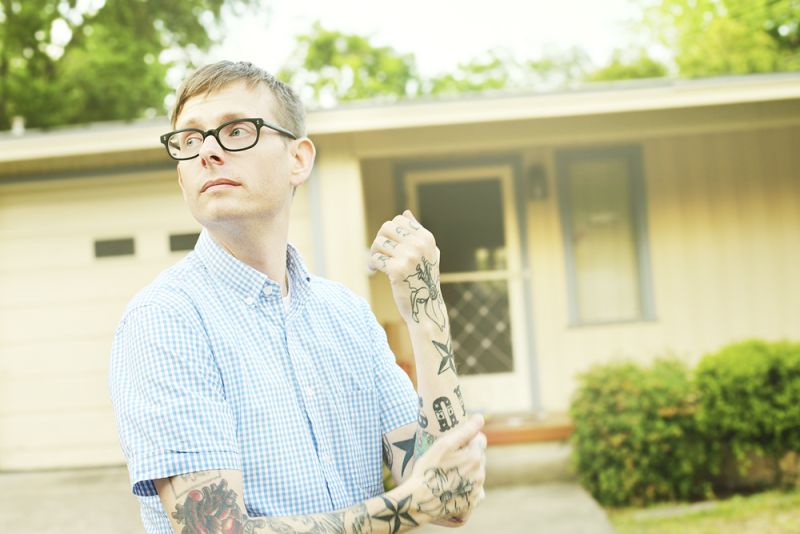 While he’s certainly not quitting music altogether, Marc Bianchi recently decided to retire his 15-year-old Her Space Holiday alias after one last album: a self-titled effort that’s haunted by life, death and at least one literal ghost yet full of hopeful, richly orchestrated hooks. In the following exclusive, the singer/multi-instrumentalist explains it all to the tune of his 10 final tracks…

1. Anything for Progress
I chose “Anything for Progress” as the opener because I think it best sums up the theme of the album both sonically and thematically. It balances the acknowledgment of the perilous times that we are living in with an almost naive optimism for a better future. Which I think we can have, but it is going to take a severe amount of painful change to get there. It is also the most orchestrated and cinematic track on the album. There were a lot of guest spots on this song in particular. I think Stevie Blacke’s strings mixed with the 4 Bonjour’s Parties wind and horn arrangements give the song a great sweeping effect. I wanted the album to start off with a flash of color.

2. Black Cat Balloons
The concept for “Black Cat Balloons” came to me in a nightmare about three years ago. I have a little black cat named Ella. She is old and tiny. She keeps to herself, and though she is sweet-natured, I believe she looks upon everyone around her with contempt. In my dream I was running through a bombed-out city. Bodies were strewn everywhere. First there was only the distant sound of explosions; then the flashes began. I stopped to catch my breath, turned around and focused on the sky. I could make out the faint outline of a weather balloon.Then two. Then 10. Quickly the sky was filled with these terrible black balloons that had a symbol on the them that resembled Ella’s profile. Every time a balloon hit something, it blew up into a horrific mushroom cloud.  When it finally registered that these were dirty bombs going off, a tremendous sense of peace washed over me. I didn’t run or panic. I kept my eyes fixed on the sky as I thanked as many people as I could remember for being in my life. Until finally, the last ultimate flash woke me up.

3. Shonanoka
For the past few years, I have been collaborating with my good friend Heisuke Kitazawa from Tokyo. Heisuke is an illustrator who designs under the name PCP. He does amazing work. We were Instant Messaging one day and he was explaining to me that a close family member had passed away and he had to go out of town for “Shonanoka.” Since I wasn’t familiar with the term, he explained it roughly as a seven-day mourning period. And on the seventh day, the “real” goodbye takes place. Having only experienced western style funerals, I thought this was a very warm sentiment. Death can be such a sudden shock to the system, even when it is expected. So the idea of gradually saying goodbye to someone even after their death seemed very graceful. So my “Shonanoka” was a lyrical mourning for a certain kind of innocence I feel that is being sucked out of the human experience. As well as the purity of nature. We are sacrificing so much of our tomorrow for the convenience of today. At the same time, I was trying to instill in myself a new sense of priorities and balance. A celebration of the cycle of life. Even if we are tampering with that cycle.

4. The Hummingbirds
When my grandmother became sick with cancer, the immediate family rallied together to help take care of her. Even with a nurse on board, trying to keep someone comfortable both emotionally and physically while they are in the final stages of cancer is a major undergoing. Little did I realize how much of a gift spending those last few months with her would be. I learned what it takes to love someone. I learned how important it is to keep someone’s dignity in tact during their last remaining days. I learned how healing laughter and music is. And I learned that the similarities between death and birth are staggering.  It’s simply moving from one destination to the other.

During the last few weeks of my grandmother’s life, a hummingbird’s nest appeared in the bush by her front door. I would give my grandmother little updates, and let her know that everything looked like it was on course. She seemed really fond of the newly forming family even though she never saw the nest for herself. Eventually my grandmother decided that she had spent enough time here on earth with us and passed with her family by her bedside. The next day the nest was empty. I like to think that they joined her on her journey to the next life.

5. Come On All You Soldiers
I am really fascinated by the complexity of human beings. There are so many contradictions and paradoxes to our emotional make up. I have seen people with the kindest hearts act like complete monsters at the drop of a dime. However, I have also seen seemingly cold-hearted people demonstrate selfless acts of kindness. I believe we all have the capabilities of being “angels” and “devils” so to speak. Nature vs. Nurture seems to be in constant odds with each other. “Come On All You Soldiers” is meant to be a commentary on those conflicting dynamics. This is my humble attempt at describing what humans are like to beings who aren’t from this planet.

6. The Candle Jumped Over The Spoon
Since this track has obvious overtones, I won’t go into the meaning of it. Instead I will give a little side fact to the recording of this song. I did the mixing and drum tracking for the album with Stephen Ceresia at sundayhouse studio in Bastro, Texas. He has turned his 150-year-old farm house into a full working studio. It is an amazing atmosphere to work in. But of course, with any old building, there seems to be some lingering spirits.

I wasn’t so happy with the way the “Candle” was starting off, so Stephen suggested that we set up one room mic and I sing and play the intro by myself on the guitar. While he was setting up the microphone I opened all of the windows to let the night sounds in. I then positioned myself in front of the mic, and put on my headphones. There in my ear were very hushed whispers of someone saying “LEAVE THIS ALONE, LEAVE THIS ALONE.” I thought Stephen was messing with me in the talk back mic so I told him to quit it. But as it turns out, he wasn’t even next to the board. It was really unsettling, but we got the song in one take. I can still hear the fear in my voice when I listen to the song today.

7. Ghost In the Garden
Through the years there have been two recurring characters in some of my songs. A faceless boy and girl who are childhood friends. They have appeared in the older tracks “The Great Parade,”  “The Weight of the World,” “Lydia” and a few others. “The Ghost in the Garden” is the first chapter in their story. It is kind of the precursor, and explanation of how the two met. I have wanted to work their adventures into a piece of fiction for a long time now. I guess I use these songs like scraps of paper to keep track of story ideas.

8. The Bullet, The Battle, The trigger, The Barrel, and Me
Every few years in my family there is a wave of funerals. 2007-2009 was an especially hard time due to the loss of six close relatives. Things like that don’t really sink in until you are at a family event and realize for the first time that a card table is no longer needed to make sure everyone has a seat. As I approach the second half of my life, it is hard to not wish that certain folks were still alive so I could continue to share milestones with them. There are so many wonderful people in my life now that I wish I could introduce to family members who have long since passed. The first part of the song is basically an homage to my father who died when I was 14. The second half of the song is a description of what the holidays used to be like. Each name used is a relative who is no longer with us. The “Bullet” is my attempt to freeze, as well as relive my favorite moments from the past.

9. Death of a Writer
The idea for this song came to me while browsing a used book store in Austin. As I walked by David Foster Wallace, Ernest Hemingway and Spalding Gray, I began to think about how much their suicides where now a part of their readers’ psyche. From the moment they left the Earth, their work would be forever changed. Passages would adopt new meanings. It is almost like a revision from beyond the grave. But at the same time they would never get the chance to write their apology stories, or their new works of gratitude. Or their forgiving speeches to the cruelty of time. Maybe they felt like their footing was finally slipping once and for all? I don’t know…we all have our reasons for doing what we do I suppose.  It made me wonder if they
would make the same choices if they had the chance to do it over again. Not only with their premature deaths, but with their work as well. I guess we will never know.

10. In the Time It Takes For the Lights To Change
This is my favorite song on the album, and the last one I recorded as Her Space Holiday. It is about how you can spend your whole life believing in something; taking it solely as an unshakable truth. Wrapping your identity in it and then having it disappear in the blink of an eye. Nothing is concrete in this world. Reality can shift on you at any moment. At first, coming to this realization was really hard for me to accept. A terrifying concept in fact, like internal sink holes.  But then, I found a great peace in all of the change that one must go through in their lifetime. You can’t stay attached to your present life. You can appreciate it, but it would be dangerous to rely on it.  Plans change and so do people. You have to endure certain things in order to grow. It is all just a matter of perspective. Sometimes relief is just slightly beyond the horizon, so you have to stick it out. We are very resilient creatures.