I WAS THERE: Noah and the Whale Get All Gloomy On Opening Night of Mercury Lounge Residency Words and Photos by Laura Leebove

On the first of three consecutive nights at Mercury Lounge, Noah and the Whale quickly rewrote their reputation as a bunch of lovey-dovey Brits. Which shouldn’t be a surprise. After all, the band’s latest LP (The First Days of Spring, out now on Cherrytree/Interscope) is brimming with heartbreak, related to the flatlining relationship of frontman Charlie Fink and fellow folkie Laura Marling. (Marling sang on Noah’s first record, and had her Alas I Cannot Swim album produced by Fink.) Songs like “Stranger,” the story of a one-night stand after their breakup, which unfolded in front of a capacity crowd as follows: “I’m a fox trapped in the headlights/And I’m waiting for the tires to spin over me.” A handful of tracks from 2008’s Peaceful, The World Lays Me Down LP were also delivered with a darker approach. The normally cheery â€œJocastaâ€ and â€œShape of My Heartâ€ both switched to an electric guitar setup, with horns lines in the latter replaced by a moody, distorted riffs. And instead of closing with the carefree single â€œ5 Years Time,” its polar opposite, â€œMy Broken Heart,â€ ended the evening in a drawn-out jam session. As for some brief moments of brightness, they came mostly from Tom Hobden’s sweeping violin and Spring‘s most upbeat track, â€œLove of an Orchestra,â€ which was done beautifully with all five band members recreating the record’s full-blown choir.

Noah and the Whale @ Mercury Lounge, 11.02.09:
Blue Skies
Our Window
Give A Little Love
Slow Glass
Jocasta
Love of an Orchestra
Rocks & Daggers
Mary
Stranger
I Have Nothing
My Door is Always Open
The First Days of Spring
Shape of My Heart
My Broken Heart 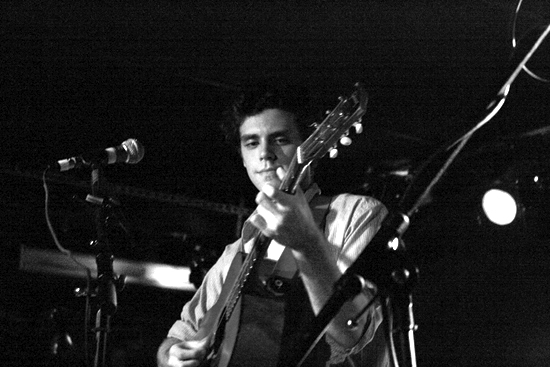 Previous MICROWAVE ONLY: Death By Audio Becomes the Smell For a Night, All Thanks to Abe Vigoda
Next DOWNLOAD THIS NOW: An Unreleased FaltyDL Song That Samples ‘Scenario’ and ‘Star Wars’, Along With Three DJ Mixes