Iggy and The Stooges Reunite on New ‘Ready to Die’ Album 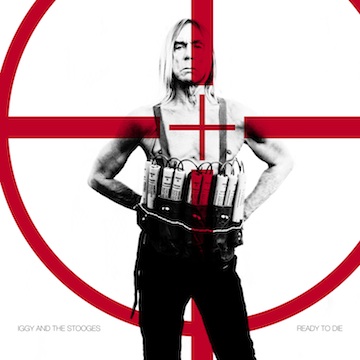 Iggy and The Stooges have revealed the release date and cover art of their first album in 40 years with guitarist James Williamson. Due out April 30th through Fat Possum, Ready to Die also features the band’s founding drummer (Scott Asheton) and bassist Mike Watt, who continues to fill in for Ron Asheton. (He died at the age of 60 in 2009.)

“Although ‘The Stooges’ died with Ron Asheton, there is still ‘Iggy and the Stooges’,” Iggy Pop said in a press statement. “My motivation in making any record with the group at this point is no longer personal. It’s just a pig-headed fucking thing I have that a real fucking group when they’re an older group they also make fucking records. They don’t just go and twiddle around on stage to make a bunch of fucking money.”

Well alright then. If you can’t tell, this record’s definitely being billed as a return to the group’s Raw Power roots, right down to its self-explanatory song titles (“Burn,” “Sex & Money,” “Gun”). Or as mixer Ed Cherney put it, “It’s old-time Stooges. It’s raw. They’re great songs, but not necessarily big choruses. They’re the Antichrist of anthems.”

Having seen the Stooges tear apart Stubbs in 2007–and been blown away by how Iggy Pop at 65 is more ripped than people who’re half his age–we can safely say that this is one reunion worth witnessing firsthand. Hey, it’s better than hearing Pop sing French covers. Check out some classic Stooges footage below…