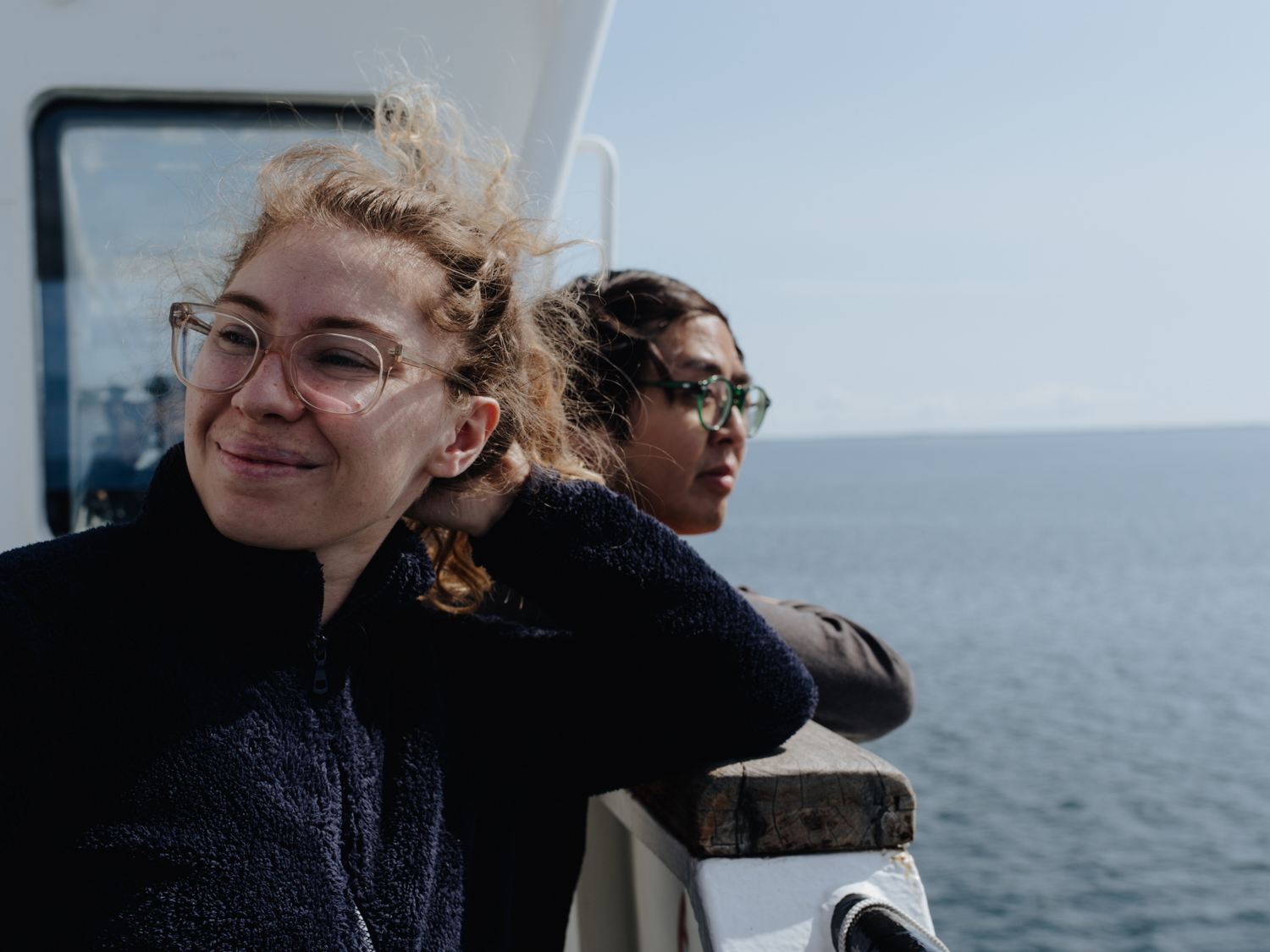 We like to think of ourselves as intrepid travelers. It’s rare that a record actually makes us want to immediately book a ticket to a place we’d never seen before, though. To the point where we’re looking at a calendar and our bank account, wondering how we’re gonna make this work.

That’s the magic of Recordings From the Åland Islands, a sublime collaboration between multi-instrumentalist Jeremiah Chiu and violist Marta Sofia Honer that channels the otherworldly atmosphere of the Åland Islands. Chiu and Honer first visited the archipelago — an autonomous region of Finland within the Baltic Sea — in 2017, mostly to help a couple friends (the mother-daughter duo Jannika and Sage Reed) open a hotel.

The pair was entranced by the place, especially its enchanting ferry rides. According to Chiu, they’re like “a surreal horizontal movement through space and time, with islands shifting into and out of periphery, totally still and calm, yet always in motion.” Lucky for him and Honer, they were invited back in 2019 to play a special concert at the medieval church Kumlinge Kyrka. This is the story of how its recording, and several other improv sessions, became the beatific LP that set’s to hit shops through International Anthem this Friday….

“IN ÅLAND AIR”
Soaring with the birds over the archipelago in a hazy, dream-like state, landing in a new and unfamiliar place. It’s lush, with a gentle, brackish breeze — serene. The sun rays reflect and ripple off of the water. Your sense of time is lost.

“This track reminds me of our entrance into the archipelago,” says Honer, “a part of the world that we were previously unfamiliar with. After the long hours of flight travel, we began to sink into the landscape by slow ferry travel on the Baltic, passing by hundreds of islands towards our destination.”

“ON THE OTHER SEA”
The title references David Behrman’s On the Other Ocean album. It’s a track that sets you presently and directly in the sea. The buoys and halyards clank in the waves, waking you from the dream-like state of the first track; the distant sound of many boat horns create a melody. Drifting steadily on a ferry, islands come into view through the port windows, one at a time, passing each other by. The melody feels alive — a bit triumphant — reawakening all of your senses.

“SNÅCKO”
“Snåcko” is the name of the island next to Kumlinge, where we were staying,” explains Chiu. “Biking from island to island is common, and it provided us with an easy way to aimlessly drift. The footsteps and birds were recorded walking around Kumlinge and Snåcko.

He continues, “The track, for a long time, was referred to as ‘Forest,’ as it captured the incredibly lush, romantic, and gentle atmosphere of the forests in Åland — a place where your eyes slowly adjust to the rainbow colored moss covering granite boulders. Walking around, you find the forest floor blossoming with blueberries, currants, and flowers, all while being surrounded by the sea. The track, like many others on the record, encourages wandering.”

When asked how “Snåcko” came to be, Honer says, “This track has taken on several permutations, but the essence of the track has always remained the same, with the field recordings taken down a forest path while exploring the islands.”

“STUREBY HOUSE PIANO”
“Stureby House Piano” is made from a cell phone recording. “We had just arrived at the home where we were staying,” says Chiu, “and as we were settling in I started to play.”

That special moment was accentuated and expanded in post-production to create an abstract symphony of piano, stretched, overlapped, and evolving into what is heard today. It’s a transportive highlight from the magical sense of place that permeates Recordings from the Åland Islands. 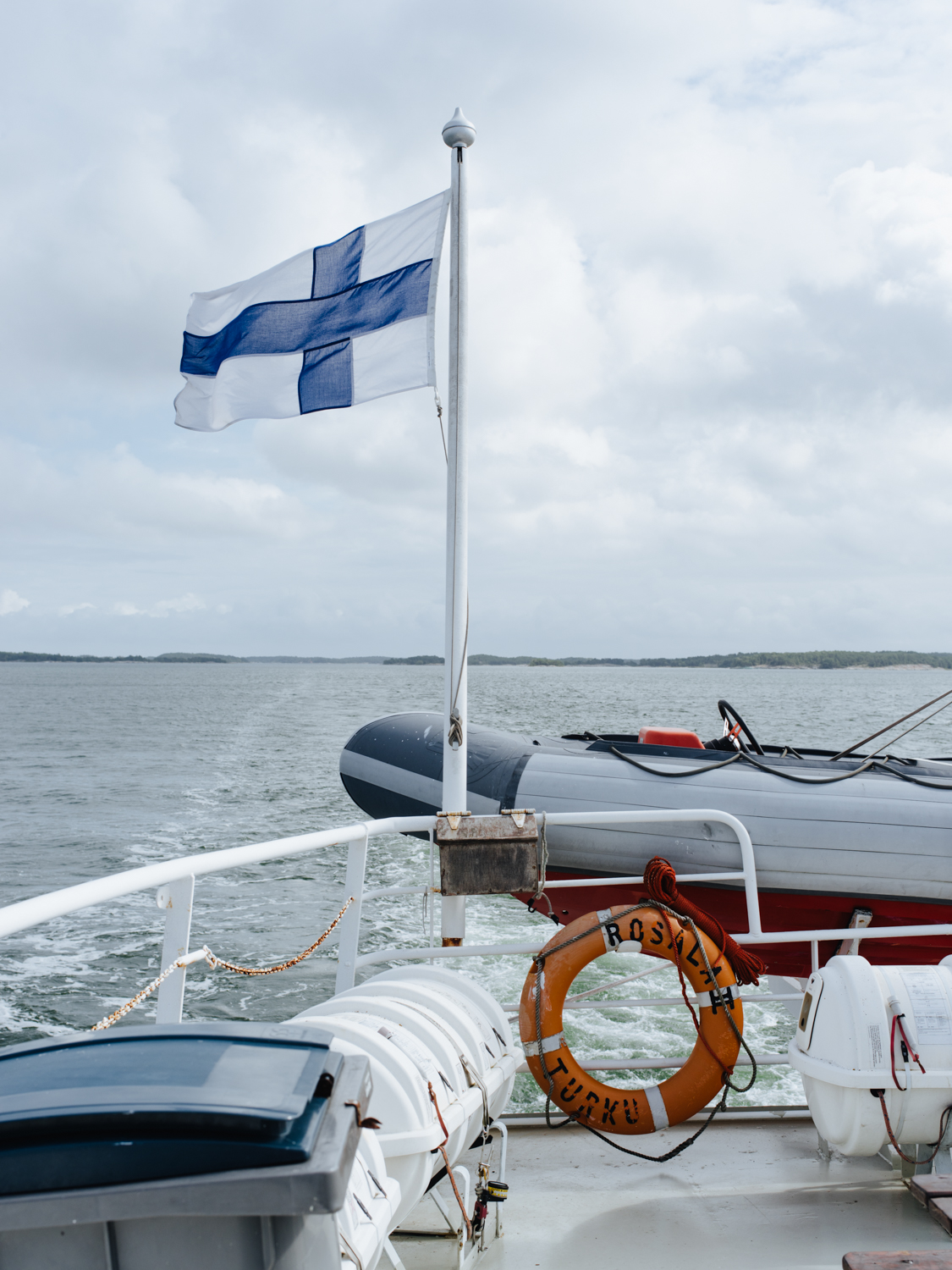 “The percussive rhythm here was (once again) captured by Sean [Pecknold],” says Chiu, “while I was playing the top of a can of Lapin Kulcha beer and some rocks.”

The genesis of the track occurred during a day trip on a boat to fish and travel from skerry to skerry. “Skerries are amazing,” explains Chiu, “as they can be quite small in size — a tiny island, sometimes with a single home on it. We would anchor just off shore, walk around the skerry, and head off to the next. When seeing thousands of these tiny islands and skerries, it gives the impression that you’re at the summits of a massive underwater mountain range.” 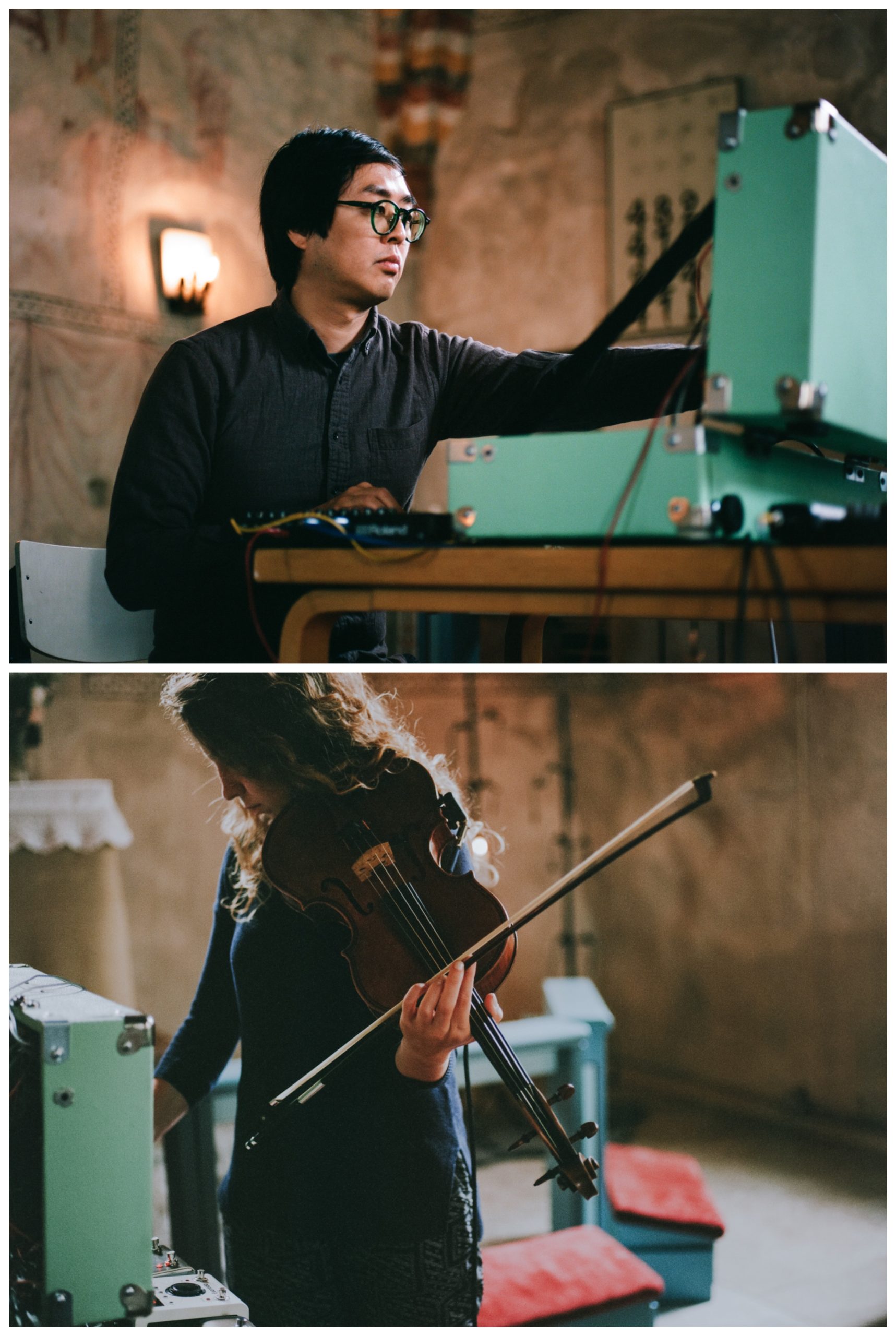 “KUMLINGE KYRKA”
“The 14th century church on Kumlinge became a center point for us,” says Honer, “as they allowed Jeremiah to record organ there on our first trip in 2017, and it became the place we played on our second trip in 2019. This track captures the feeling of performing, which can often seem to be in slow motion with everyone watching silently.”

“The final track is a blend of different recordings,” adds Chiu, “the percussion from the boat with the live performance from Kumlinge Kyrka (aka S:ta Anna’s). You can hear a boy in the audience cough at :49. This live take was then processed by Marta, using granular synthesis to stack viola lines on top of themselves.”

“VOICES”
With a population of 307, the voices captured on this track showcases the resident islanders that we had the opportunity to meet.

“This track loosely reference’s Franco Battiato’s ‘Café-Table-Musik’ piece,” says Chiu. “I love how intimate it feels — a voyeuristic glimpse at the kitchen table of a stranger’s house.”

“Voices” combines clips throughout the trip: a story being told by the Island’s pharmacist, a candid recording of our friends hanging out in front of the café market, the young boy working at the kyrka, and our host Jannika telling stories. 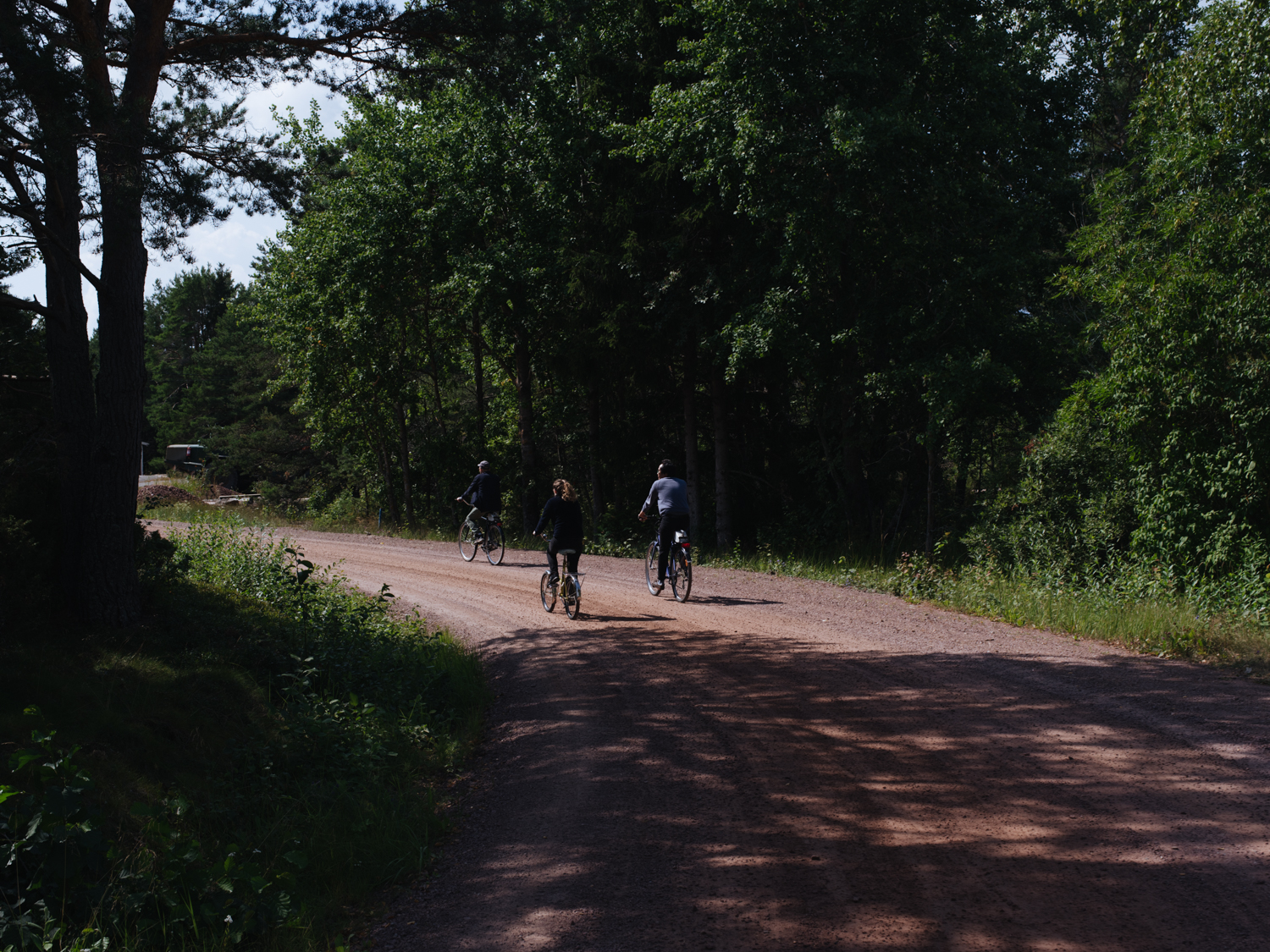 “BY FOOT BY SEA”
“‘By Foot By Sea’ ­­shares the story of two magical activities,” explains Honer, “biking through the islands at 1 a.m. during the everlasting dusk of the midnight sun, and taking a boat ride through the archipelago.”

“It’s a reflective piece,” adds Chiu, “set in the evening to late night hours, where the sun is hovering along the horizon, gently dipping towards, but never fully going away.”

BY SEA — Kayaks and rowboats are available to rent to explore the skerries and outer islands.

The track itself is the second longest on the record. It shares the same instrumentation and samples with “On the Other Sea.” It expresses what Marta explained above: midnight bike rides, sitting next to the sea under the midnight sun, biking from island to island, and watching boats bob in the harbor. 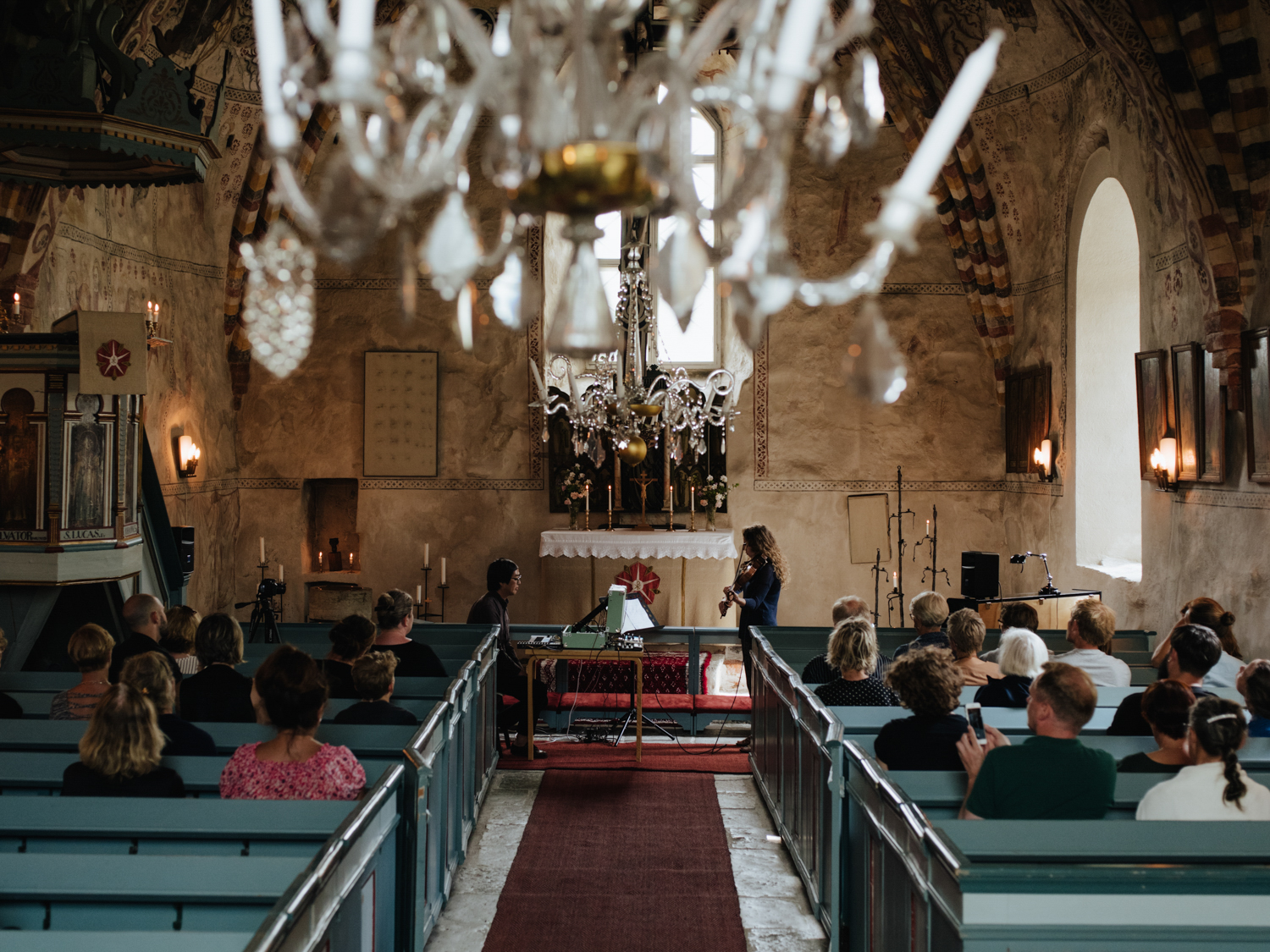 “ANNA’S ORGAN”
“’Anna’s Organ’ refers to S:ta Anna’s (a.k.a. Kumlinge Kyrka), the church where we performed a concert,” says Chiu, “The track combines a field recording from the forest with the live performance from the concert where I was playing the church organ.

Chiu continues, “Because I was able to spend so much time experimenting with the organ, the way that I performed it was described as being ‘unlike anything I’ve ever heard in that space’ by a local resident that attend the concert — slowing pulling the drawbars in and out so you could hear the air whistling and escaping into the air.”

“ARCHIPELAGO”
“Archipelago” starts off with a flute played by Marta’s dad. This track is the longest, and darkest, on the record. It encapsulates the voice of the rocks, the waterways that flow between, the sheer size and scale of thousands of islands near each other.

The Åland archipelago consists of 6,500 islands and skerries, all sitting in the Baltic Sea in between Finland and Sweden. The islands themselves are an autonomous region following the Åland War in the 1850s. The darkness in the track makes reference to the challenging winters where nightfall consumes the majority of the day. The winters are long, hard, and cold. 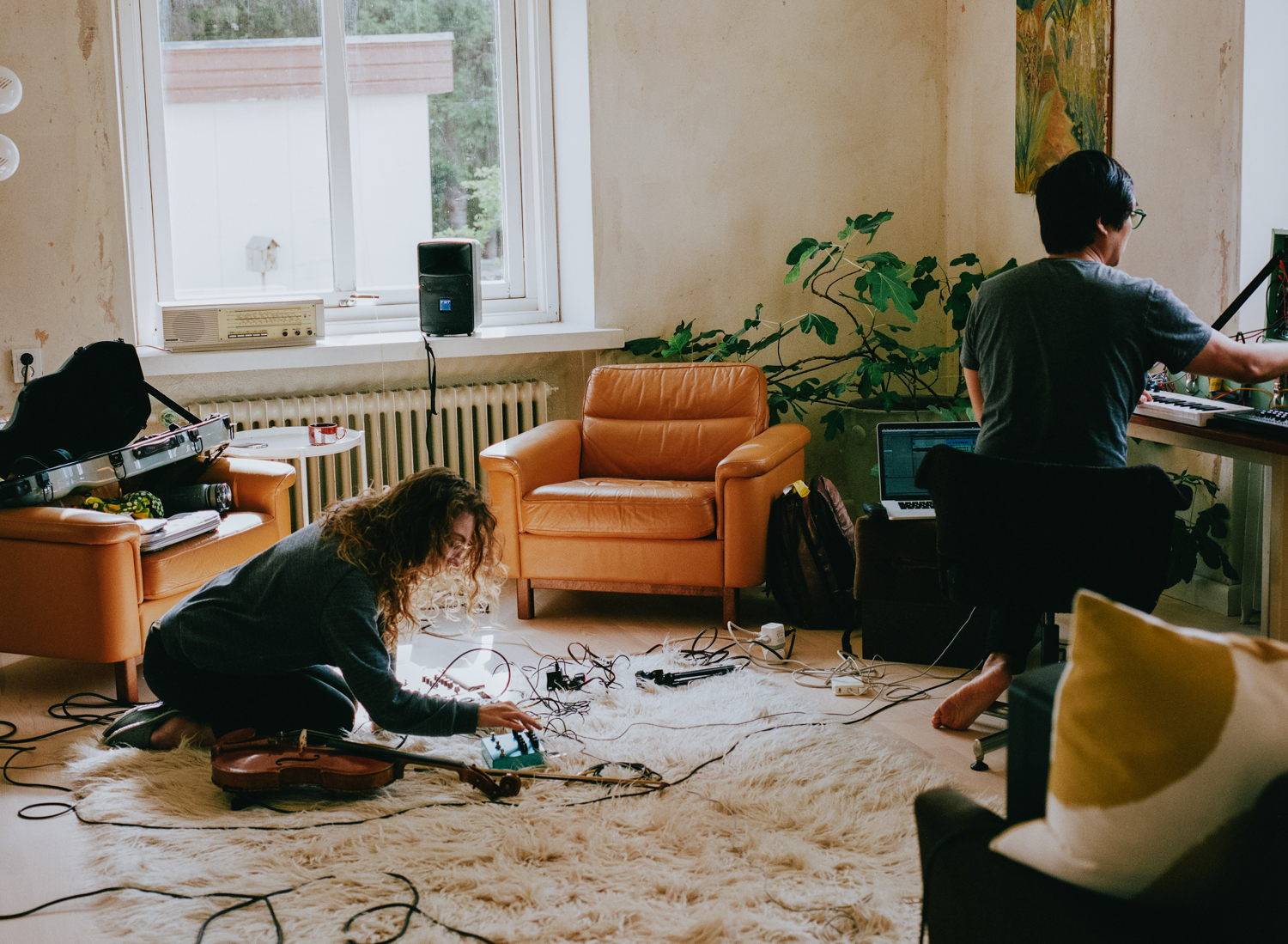 “UNDER THE MIDNIGHT SUN”
“I remember making this track while sitting in the main dining/living room of the hotel,” says Chiu. “It was the first track that was finished and in a lot of ways, set the project in motion.

He continues, “It was such a peaceful, beautiful day; everyone was up to their own thing, and I was just sitting and recording, in front of the window, looking out into the backyard at the granite boulders. Drifting and floating in the clouds above the islands.” 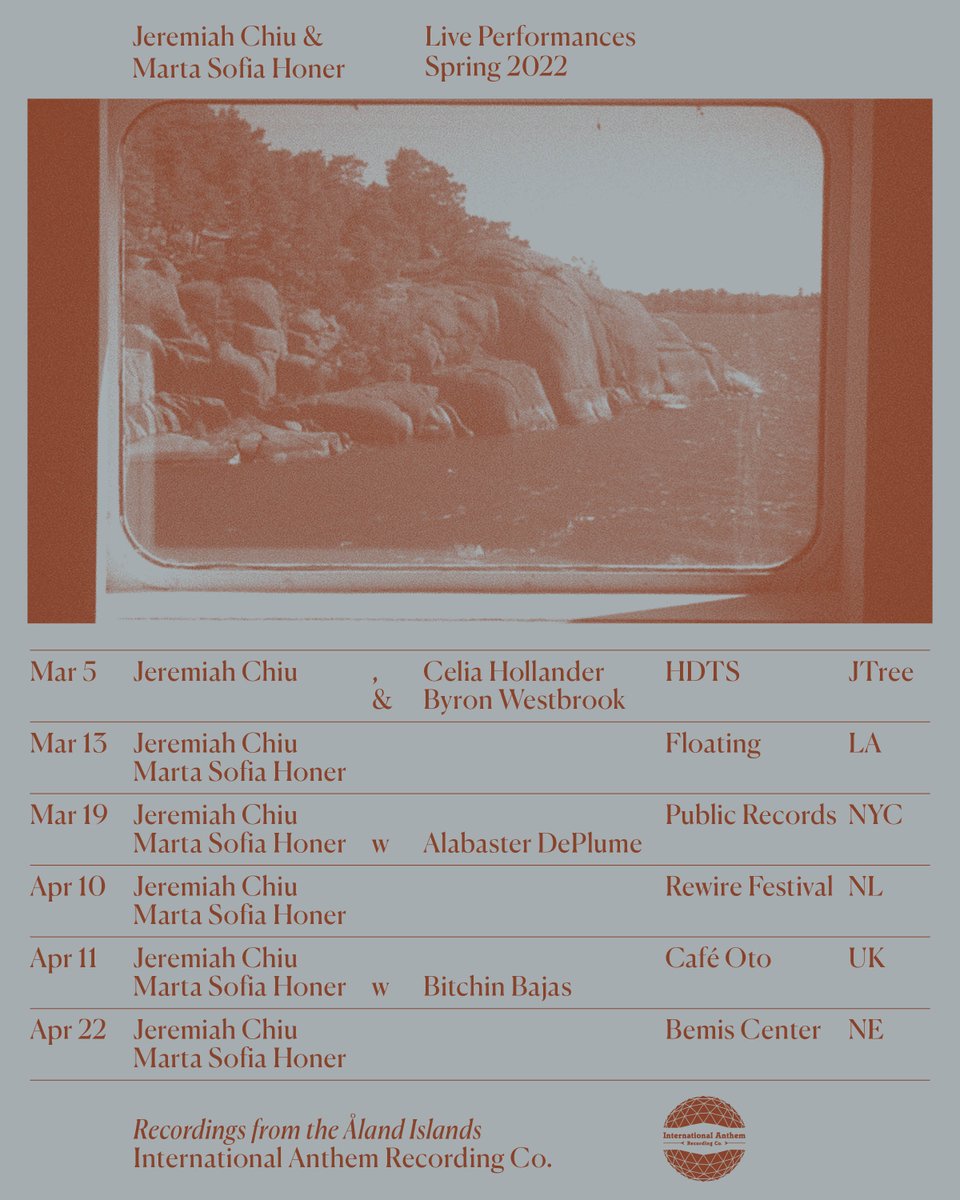