J.G. Biberkopf’s Got Some Explaining to Do 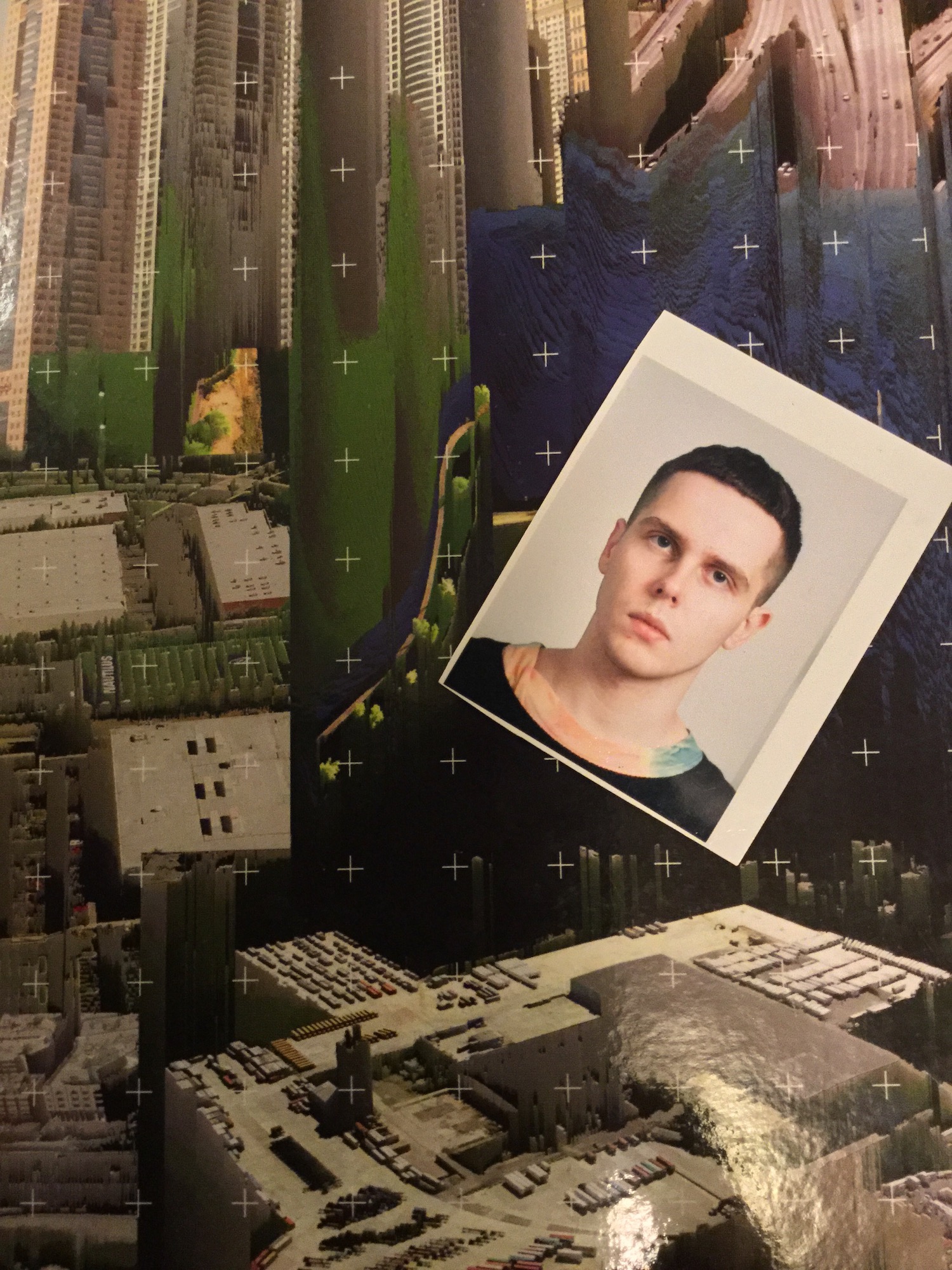 Explain Yourself is a new feature where we grill our favorite artists about their latest album, side project, or EP. Quite simple, really.

In the hot seat this week: J.G. Biberkopf, the idiosyncratic composer/producer behind last month’s rather lovely ‘Fountain of Meaning’ 12” on Danse Noire. Check out a complete stream and track-by-track commentary for his last full-length here, and read about the rest below….

What’s the story behind the cover art of your new EP? It’s as if everyone’s worshipping the fountain in it….
After visiting Singapore and Kuala Lumpur last year, the fountain form was something that started to haunt me. During New Year’s, I ended up at this EDM party in a Singapore supermall called Suntech, which is located next to the Fountain of Wealth. It’s capable of throwing water like 70 meters up, and surrounded by skyscrapers beautified by intense colors for the occasion—a setting for corporate rave hysteria.

Niels [Wehrspann] of the Danse Noire crew did the artwork; he scrapes publicly accessible FTPs for unknown peoples’ photos. We went with the idea of 18th-19th century European fountains representing a particular culture of bourgeois, elite architecture. In the final stage of choosing the artwork, I was also reading the Paul B. Preciado book Testo Junkie. There is a chapter in the book which talks about social control through intentional excitement—control through collective sexual stimulation and arousal of desire, which pretty much articulated my reading of the fountain form as a form of power, power through beautifying delirium and chaos. In this work, the fountain is mostly a metaphor for me, encompassing the ties between (architectural) construction of sacred history narratives, beauty, the divine, delirium, excess and power—the creation of power through architecture. I find any architectural ornament inherently erotic—embodying sexual privilege or advantage, and the fountain is explicit in that regard—phallic, wet, and in a never-ending ejaculation.

How do you find a balance between the philosophical, lyrical, and musical sides of what you do? Or to put it another way, how do you make big ideas resonate on a deeper, more emotional level, rather than a purely academic one?
I don’t think I am academic at all. I think I see myself more at the end of critique of the rational scientific modes of thinking. I kind of prefer reading paper abstracts to Twitter or whatever, but I have no education or institutional validity which would allow me to call any outcome of mine academic. I’m more interested in corruption and reinterpretation of academically produced knowledge, liberally constructing narratives through a cannibalistic mode of piracy, which in the end is also a political stance, and an important gesture in the production itself.

Also, I think it is impossible to be academic with music; I think you can try as much as you want, but at some point, the grasp slips away, and humanity still seeps in. Regarding finding balance, I think research serves for a imaginary territory, in which I can lose myself, without any attachments. After a particular time, I explore how what I have done reflects back to the initial seed. If I see the reflection is meaningful I try to adjust, but in the end, the adjustment process becomes a further mutation and expansion of the initial. I think I tend to expand from a starting point, to put more and more in the more I time spend, rather than taking stuff away.

What were some non-musical influences behind this record—things you read, saw or witnessed?
Of significant impact on the record was a complete disillusionment I felt with music and art industries, in relation to some extreme happenings in my personal life which made me reevaluate fundamentally how I navigate life, but which I feel are too sacred to bring to the space of an interview promoting a musical record. I became incredibly angry at how impotent, shallow and double-faced most artistic gestures were when compared to global collective pains. Writing music became so much about emotional restoration, possibly self-damaging generosity, sharing the embarrassingly sincere, painful, beautiful, and vulnerable. I guess while working on another piece with a colleague, just before starting to write this record, I was confronted by how insecurity leads to coding of whatever you do, obscuring things in chaos, or extra layers of information. I came to love the power of the embarrassingly straightforward. I tried to put as much as I could into the tracks, which a lot of the time meant reaching a certain emotional breaking point, where I would just straight up start crying.

I guess a huge influence for this record was Georges Bataille, whose work I was enjoying at the time. Also some texts of the philosopher Alphonso Lingis, and conversations with the [curator/media theorist] DeForrest Brown, Jr. One of the initial seeds was from the sound studies field archaeoacoustics. I tried to make a [piece] using those methods for a long time and while I failed, the process still informed a lot of the record.

I love how you used voices on this record. They set a really meditative and moody tone for the whole thing. Was that one of your goals heading into this record? Did you sample anything surprising or unconventional?
I figured out a lot of new techniques for working with voices on this record. I didn’t have a particular goal; it was more about finding exactly what triggers me to break down, to disjoint. Though I guess exploration of voice is a constant throughout my work. It’s interesting to me, since as humans we instinctively empathize with the voice, and I think the mod-ability of it through technology—the new ways you can make a voice sound—allows musicians to create something mirroring where the symbiosis of human, nature, technology is at the moment, and what this symbiosis allows in the architectures of identity construction.

I was also interested in performances of the historical. I followed the lead of Spotify recommendation algorithms through the past to find music to sample. I made a lot of field recordings in churches and supermalls. I’ve also made recordings of myself listening to music, getting triggered by an ecstatic moment, looping it for hours as a way to disjoint myself from whatever emotional state I was in, to freeze in that ecstatic moment, and record it playing it in my room.

Your music often channels the spirit of what it’s like to live in a world dominated, and driven by, social media feeds and digital content. How do you feel about the ways in which technology has overtaken our daily lives? Overwhelmed? Excited? Fearful of what comes next?
One of the things I explored with this record is the excess of available history, instantly accessible, through a six-second Instagram story, some leftover footage from the early 20th century, or an imagined version of crucifixion. Space between these temporalities is minimal. So there’s this new weight of recent history, and the Genesis stories, and new ways of drawing and seeing these histories.

Personally, I chose to shut off from social media, because I felt that what it extracts from me is far greater than what it gives. I find that online infrastructures have been gentrified, and are losing the ability to accommodate even very brief temporary autonomous zones, although I am not at all romantic about the libertarian, utopian, mostly white male cyber futurism of the ’90s. I feel that this is probably not the structure to base our future on, so at this point I’m just interested in observing how what is ‘normal’ mutates very quickly.

What are your plans heading into 2018 in terms of performances, other original music, etc.? Can you tell me a little bit about how you plan on turning the ‘Ecologies’ series into a theatrical piece?
I want to write the third Ecologies to finish the trilogy. The theatre piece based on Ecologies is a secret for the moment as I am awaiting the results from multiple funding bodies to know whether my team will have the resources to do it, so it’s too early to talk about it at this point. It’s also not entirely turning the trilogy into a theatre piece; it’s more about using Ecologies is a starting point to go further. I am also looking into finishing and releasing some of the works I’ve been doing for theatre and performance. I’ve recently started a collaboration with Holly Childs, which we plan to iterate in different forms throughout 2018. I’ve also started working on a documentary, but I can’t talk about that either.