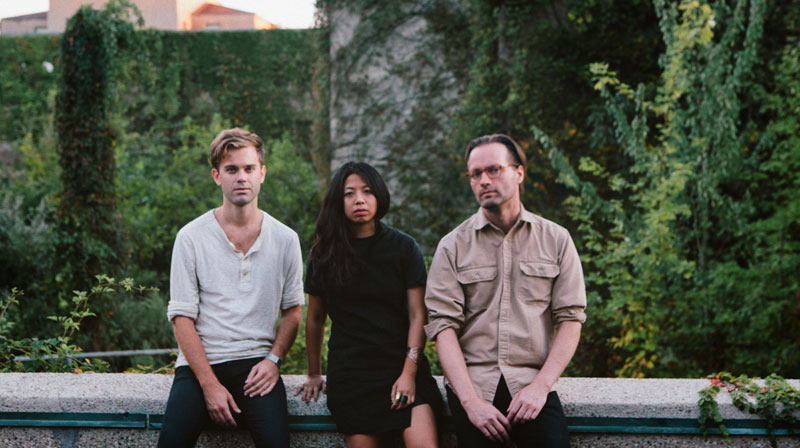 The last time we featured FORMA, the Brooklyn-based trio delivered a fitting tribute to Conrad Schnitzler right on the cusp of their promising debut for Spectrum Spools. OFF/ON takes their all-analog-everything attitude even further however, presenting a restless set of synthcapades that doesn’t just fetishize the group’s growing collection of Moogs.

New York fans will be able to hear what we mean at a special release show next Thursday (watch formasounds.com for details). The digital edition of the album is also available right now, with a vinyl/CD pressing on the way next week. In the meantime, here are five records that have barely left the band’s turntable in the past couple months…

Skinny Puppy, Mind: The Perpetual Intercourse (Nettwerk, 1986)
I heard Skinny Puppy’s VIVIsectVI for the first time in the fall of 2011, right around the time FORMA were preparing to go back into the studio, and I was stunned by how punishing the drum programming was. That experience led me to one of the band’s earlier works, Mind: The Perpetual Intercourse. The record utilizes a Roland TR-707 drum machine, which was the rhythmic cornerstone of FORMA’s first album, but the smothering reverb and syncopated latin patterns were unlike anything I’d heard before. It had a huge impact on the drum sound of OFF/ON.–George Bennett

Ashra, Correlations (Virgin, 1979)
A truly great instrumental guitar and synth jam record. Harald Grosskopf’s drumming keeps everything locked together while [Manuel] Gottsching’s guitar traverses all kinds of emotional territory. The A-side starts out like a ’70s Italian horror movie score with “Ice Train,” then shifts to a very disco “Club Cannibal” and lands into the tropical repose “Oasis.” I listen to the A-side on repeat; it never gets boring.–Mark Dwinell

Scritti Politti, 4 A Sides (Rough Trade, 1979)
I had been reading about the early days of Scritti Politti in Simon Reynolds’ Rip It Up and Start Again It’s a really compelling storyline in regards to their political and intellectual underpinnings, yet the only music I had heard of theirs was of a later period and overproduced in an uninteresting ’80s sort of way. A DJ friend sold me a spare copy of 4 A Sides and I was really taken by it. Way beyond any of the standard postpunk tropes, these tracks sound like they belong in more of a warped mid-’90s post-rock world. The tracks are rife with absurd time changes, clangorous guitar scratching, and expertly executed bass lines. But what’s really apparent is a methodical deconstruction of their dub influences, blasting them apart into a nearly unrecognizable form. And threading all the way through is Green Gartside’s serious, yet delicate and emotive vocal melodies. “P.A.s” is as close to a perfect song as I can think of.–MD

Stephen Mallinder, “Cool Down” (Fetish, 1981)
I’ll buy anything by Cabaret Voltaire prior to 1985. I spotted this 12” at a record fair and had a feeling that it had to be good–Stephen Mallinder is a founding member. “Cool Down” is the kind of track I knew CV were totally capable of, but never produced on record. It features an uptempo, driving motorik drum machine beat, a repetitive bass line, harmonically percussive guitar, lilting and sad cinematic synthesizer pad, and an infrequent and haunting monotone vocal drowned in analog delay. It sounds very German in structure and is a truly great jam. I hope there’s more of this out there somewhere.–MD

Jah Wobble, V.I.E.P. (Virgin, 1980)
I am still astonished by how catchy and deranged the vocals are, especially on “I Need You By My Side.” This record is slapped together perfection that perfectly showcases Wobble’s particular form of sloppy, slippery dub. –Sophie Lam