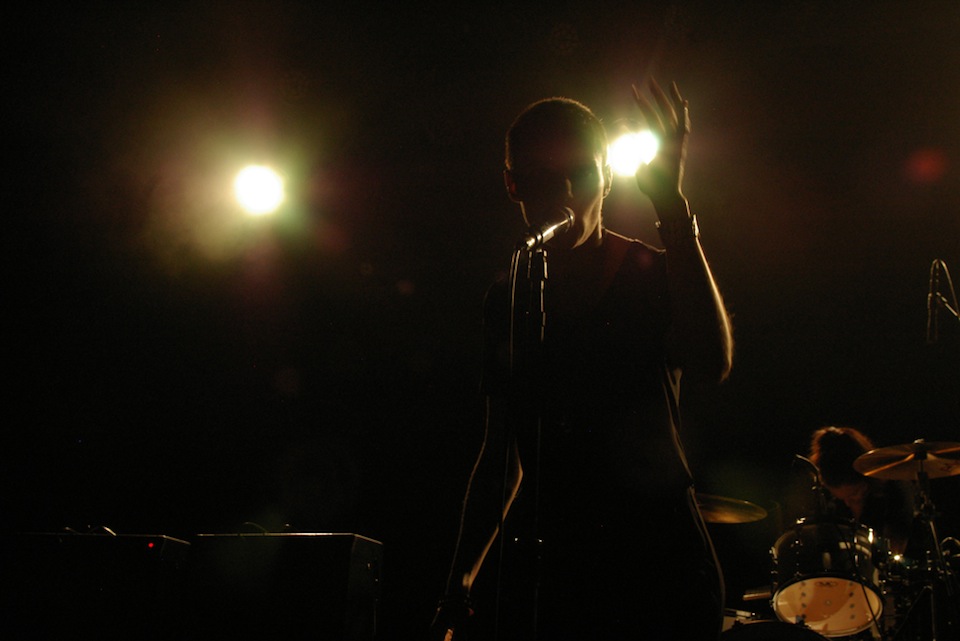 Words and Photos by J. Bennett

Savages have a suggestion for us. A suggestion that seems completely appropriate coming from a band that called their first album Silence Yourself. It comes in the form of “A note from Savages,” printed on sheets of 8 ½-by-11 posted at six-foot intervals along the wall outside the Fonda Theater in Hollywood. It reads: “Our goal is to discover better ways of living and experiencing music. We believe that the use of phones to film and take pictures during a gig prevents all of us from totally immersing ourselves. Let’s make this evening special. Silence your phones.” Which they are. Milton and Hassan are possibly the deadliest rhythm section in rock right now. Meanwhile, Thompson channels the force of far-flung weather systems through a Daphne Blue ’66 Fender Duo-Sonic. And Beth? Her close-cropped hair, intense stage presence and vaguely robotic dance moves have earned many a comparison to fallen Joy Division frontman Ian Curtis. But where the long-gone Curtis can represent only death and despair—the man hanged himself, after all—this woman epitomizes life in all its ferocity and fragility. Four songs in and she hasn’t spoken a word to the audience. She’s in this shit—plumbing the deep, dark depths of Siouxsie-fueled killers like “Shut Up,” “City’s Full” and “I Am Here.” Mid-show, the road crew hauls out a standup piano and Beth sits down to play slow-burners “Waiting For A Sign” and “Marshal Dear.” Professional gig-pacing is what they call this sort of thing.

Post-piano, they launch into “She Will,” which gets the best response of the night. In fact, Savages pretty much slay the nearly-full house right up until closing with non-album cut “Fuckers,” which starts promisingly enough with a clever spoken-word bit from Beth (“Before I start thinking I have to change, first I’m gonna look around and make sure I’m not surrounded by cunts”) but devolves into a ridiculously extended jam involving Beth’s boyfriend Johnny Hostile and freeform sax skronking from tour opener Duke Garwood. It’s a strange move for a band so heavily predicated on short, sharp, almost hermetic compositions. To be fair, Savages’ sole album is less than 40 minutes long and they’re probably contracted to play for at least an hour so they’ve gotta fill the space somehow. But fuck, learn a couple of Stooges covers or something. Or better yet: Play 40 minutes, smash us in the teeth and walk offstage like goddamn heroes.

Still: If you can forget the last 10 minutes ever happened—give us a few days; we’ll get there—it’s a stellar performance from post-punk’s last true hope.