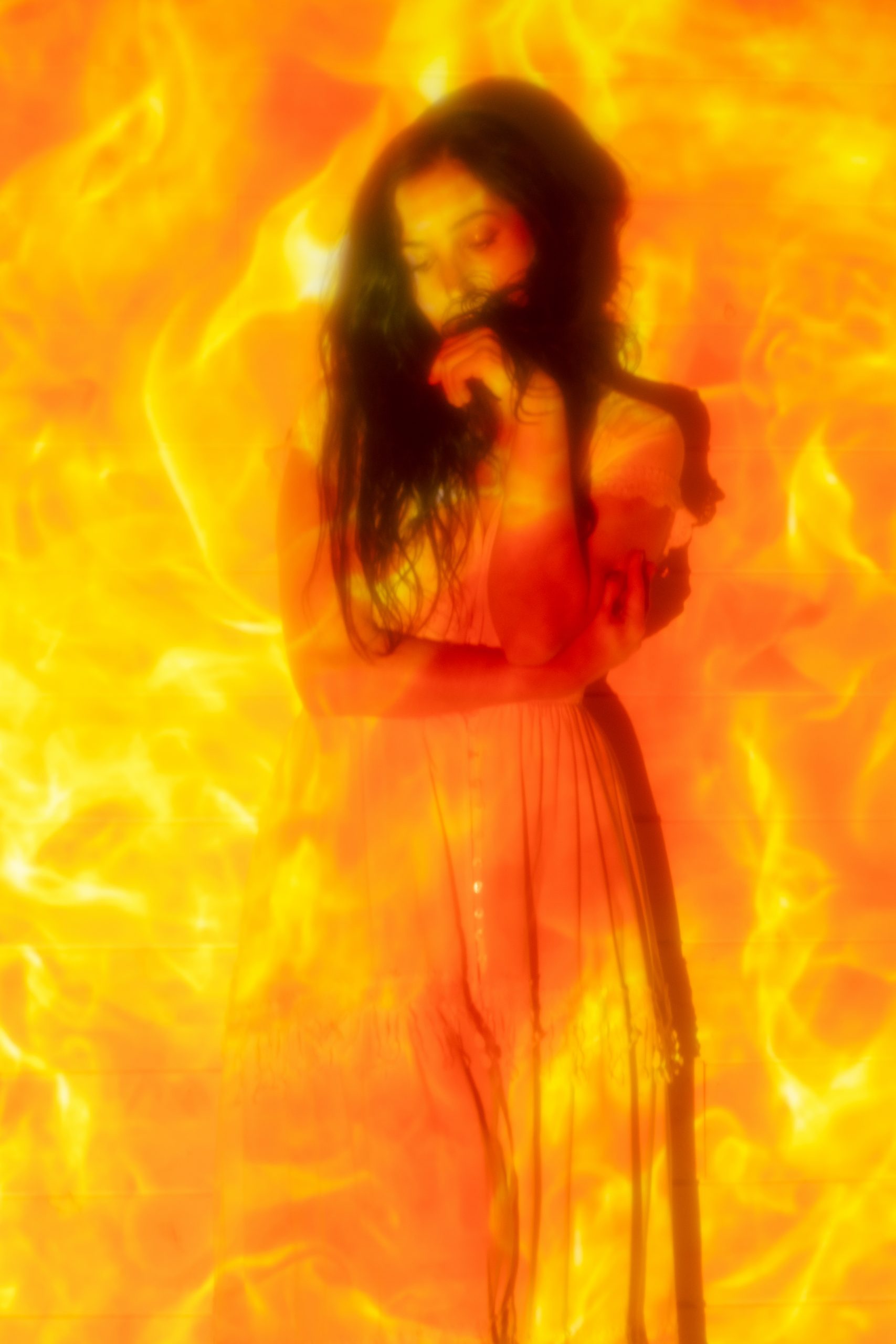 This week’s entry is a special Bandcamp Friday edition featuring the many phases of Marissa Nadler, who recently unveiled her ninth solo album (The Path of the Clouds) — a real high water mark if you ask us — on the singer-songwriter’s longtime labels Sacred Bones and Bella Union. Take it away, Marissa….

I wrote my first official album while I was still in art school at RISD, majoring in illustration. I had been writing songs and playing guitar since I was around 15, but became increasingly dedicated to my song-craft by the year 2000. Perhaps living on a street that Edgar Allen Poe had courted a widowed love interest — as well as growing up in New England, where haunted remnants are everywhere — rubbed off on me stylistically.

Myles Baer recorded every Wednesday on his day off to help me make this album, and played a lot of the spacey instrumental additions. Jeffrey Alexander, who I’d met when I’d contributed to his Pearls Before Swine tribute album, For the Dead in Space: Volume II, put me in touch with Ed Hardy at Eclipse Records. Ed ran a mail-order vinyl label run out of Bullhead City Arizona, and really liked the album and agreed to release it.

Though I didn’t expect much to happen, I did want to give it a chance. I was surprised by people writing about it, as I didn’t have connections and absolutely no funding went into that album. I’m still quite fond of my debut album.

I’d moved to New York and was teaching high school art while writing this album. I was also nursing my first big heartbreak and living in fantasies, untethered and adrift. I was still young and a lot of the influences I was into sonically show through (for better or worse).

It was recorded by the wonderful Brian McTear in Philadelphia, who I remain close with, in what I remember was a day or so. “Yellow Lights” is the song I still like on it the most. Most notably, I remember singing my very first ever harmony in the studio with Brian cheering me on to try it, on the song “Mr. John Lee (Velveteen Rose).”

I wish I could go back and time and just sing and play the whole album again. That’s part of the deal — you put art into the universe and it’s there forever.

I moved back to Providence and wrote this record, still heartbroken. Sometimes it does take years to get over that first cut. It’s the first album that most people heard of mine. I was pretty lost in my life when I wrote this one, renting rooms in strangers’ houses and generally trying to find my footing.

There’s a lot of feeling and honesty in these songs. I spent a ton of time working on my guitar playing and singing and writing before recording this with Greg Weeks of the Philadelphia band Espers. It was my first album that came out in a wide release.

I think I moved back to New York for a while. I can’t remember because by that time I’d started to tour so much it gets a little blurry in terms of the timeline. I would love to do a re-recording of this album someday.

Anyway…it’s a long story but, I’m still fond of many of the songs, all the players, and the beautiful production on this album. Chris Coady did a great job taking my sound places.

I participated in a Kickstarter campaign in 2011 to fund the recording and release of my “self-titled” album. I went back to work with Brian McTear again, and Carter Tanton and Ben McConnell were the players that most contributed. Jon Low engineered the record.

It was a really good, empowering experience to make this album. I started my own little record label, Box of Cedar, for this release as well as the next one, The Sister.

Favorite Tracks: “Baby I Will Leave You In The Morning,” “Mr. John Lee Revisited,” “Daisy Where Did You Go,” “Apostle”

To me, July marks the start of a whole new era both in terms of my life and my songwriting career. I was teaching fine art again; this time at a therapeutic high school in Massachusetts. I’d tried LA for a while, but moved back to Boston, and had taken a break from music for a tiny bit, feeling discouraged.

I couldn’t stay away long, and I came back to my song craft with all of the fire and more self-belief. In part by seeing how important art and music truly was in a society as a teacher.

I am very proud and fond of this album. It also marked a long working relationship with my new labels, Sacred Bones and Bella Union, who have supported me through this stronger second act. This album, as well as the ones that follow it, mark a significant development in my writing, singing, playing, and overall dedication.

I travelled to Seattle to work with Randall Dunn, who produced this album as well as the next one. There’s beautiful strings on it by the excellent Eyvind Kang. I particularly love how my approach to singing vocal layers and harmonies developed on this album.

Favorite Tracks: I really am fond of this album from start to finish.

My lonesome apocalypse album. I’m very proud of this one as well.

I spent a very long time on the lyrics, often starting with the cut-up method to dig out of any blocks.

This record features great playing by Milky Burgess, Stevie Nistor, and Steve Moore, to name a few. I really worked on the harmonies for this as well, for an extended period of time, before the actual studio dates. This was recorded in Seattle as well.

More sonically stripped down than it’s predecessors, but featuring some of my favorite songs I’ve written. I got some of my all-time favorites to sing or play on this, including Angel Olsen, Sharon Van Etten, Mary Lattimore, Patty Schemel, and Kristin Kontrol. Produced by Lawrence Rothman and Justin Raisen in Los Angeles.

Favorite Songs: “Said Goodbye To That Car,” “I Can’t Listen To Gene Clark Anymore,” “For My Crimes”

This is my first fully self-produced album; I’m very proud of this one. You can read and hear all about it on the internet.

Favorite Tracks: I can truly say I wouldn’t cut a song from it.

Lost Horizons
Where I got to work with [Cocteau Twins bassist / keyboardist] Simon Raymonde for the first time, co-writing several songs over two different albums. It was a real honor to work with him.

Droneflower
With Steve Brodsky. This is an eerie and vibe-filled record that I really love. It features a wide-ranging sonic palette and a cover of “Estranged” by GnR that we spent forever on!

“Poison”
John Cale singing with me on Poison was very surreal.

Instead of Dreaming
(Sacred Bones, 2021)

A covers album I made this year that I really love. If you dig a little further, I’ve released tons of covers over the years, as well as many DIY releases and home-recorded demos. They include….