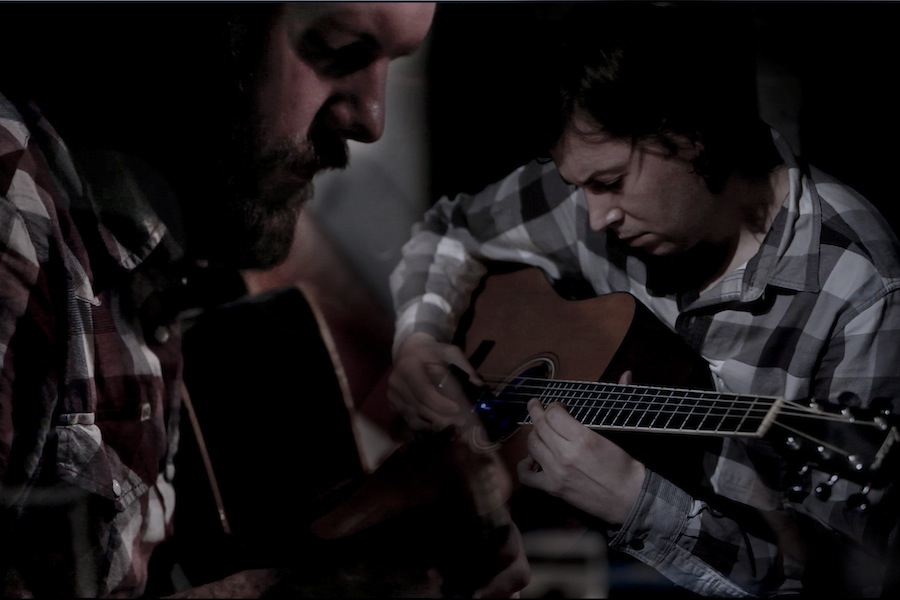 As we continue to battle blizzard-like conditions over at self-titled towers, we can’t think of a better back catalog to plow through than Mountains‘ organic take on ambient music. And by organic, we mean lots of living, breathing samples, sharing wide open spaces with carefully-plucked guitars and crystallized keys.

Since the Brooklyn-based duo is appearing at the Unsound Festival tonight–opening for Tim Hecker, Radian and Tape at LPR–we asked them to share the stories behind some of their standout songs… Koen Holtkamp: We felt like this track needed some more subtle details so we ‘played’ a glass of ice water and recorded the sound of ourselves flipping through pages in a book to add a different sense of texture. We’re interested in using sounds that could be somewhat familiar to people and perhaps carry some kind of association. The recordings of the ice water and books were done in the isolation booth Brendon built in his former apartment. This apt was not a loft or big space of any kind but the average cramped and awkwardly set up railroad style apt in Brooklyn, so the booth basically took up an entire room and looked somewhat like a little trailer inside a room or a contemporary art installation depending on how you think about it.

Brendon Anderegg: I lived in Arizona for a while and had the opportunity to record the most violent thunderstorm I have ever seen/heard. When it rains during the summer monsoon season, it is a spectacle for sure. I was woken up at 7 a.m. by really loud thunder and immediately went out and set up mics on my covered front porch. In reference to the track “Telescope,” our idea was to start with a strong melody that, over the course of several minutes, gets more and more filtered until all that is left is this field recording. KH: The beginning of the first track on Sewn uses a recording of the hiss from an amplifier going through tremolo and then later some other processes. This was done as a sort of nod to the album Laughing Stock by Talk Talk, which begins in a similar manner. Always really loved that album and I thought it was an cool way to start a record by creating a sense of space or environment rather then simply beginning with music.

KH: If you listen closely, you can hear the sound of my old dog Jake (RIP) on several of the tracks on Sewn. (Mostly the sound of his dog collar rattling around as he explored.) He accompanied us on most of the field recording excursions that we went on upstate and we were mostly using in ear binaural microphones which pick up everything so he inevitably made his way onto the recordings. We decided to leave it in rather then cut out those parts as it was a part of the experience. Seems a fitting tribute now that he’s gone. BA: Koen and I created this track by recording sounds from our laptops onto my desktop and then playing instruments over them. My laptop ended up crashing during the recording creating some really nice rhythmic structures. I really like how this came out. It’s something that one could not plan for or recreate. It’s always exciting when something accidental gets incorporated into a song.

Previous RECORDING UNDER THE INFLUENCE: From the Creepy Films of John Carpenter to Emmet Otter’s Jugband, RJD2 Chips Away At ‘The Colossus’
Next Small Black Sign to Jagjaguwar, Ready Spit and Polish Reissue of Debut EP and a Completely New Collection of Soft Focus Pop Songs