MOVIES FOR THE BLIND: Cage Delivers a Complete Guide to Zombie Films 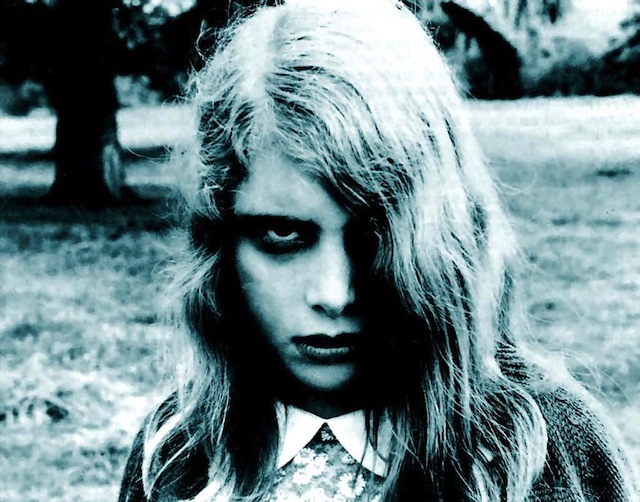 Going to the movies has been such a bore lately, so I’ve taken to watching a lot more movies at home. Zombie films, in particular. Being that most box office smashing is meant to appeal to a theatre packed full of corn syrup-sipping zombies, drooling into their over-sized buckets of corn, going “weeee” as they fall through plot holes, I thought this would be the perfect time to do an entire column on zombies. This piece is called…

I WANT TO EAT YOUR FUCKING FACE

I don’t have a favorite zombie film but to kick this shit off with anything other than George A. Romero’s Dawn of the Dead would be a crime worth a hanging. It’s ranked No. 1 in Glenn Kay’s Ultimate Guide To Zombie Movies and it used to scare the shit out of me. Zombies in a shopping mall, my god George, what are you trying to say to us? So ahead of his time and though it’s the only George A.Romero film I’m recommending, there are a few others I enjoyed almost as much, like Day of the Dead and, of course, Night of the Living Dead. â˜…â˜…â˜…â˜…â˜…

Stuart Gordon is dear to my black withered heart with 1985’s Re-Animator. A scientist bringing back the dead starting with a cat. I love this movie more than my mom. A severed zombie head of another scientist being carried around by his body on a tray and performing cunnilingis on said scientist’s bound girlfriend. This movie is a staple in the genre and if you haven’t seen it please do it this weekend during your zombie DVD marathon. (You’re welcome.) â˜…â˜…â˜…â˜…â˜…

This list couldn’t be complete without Lucio Fulci’s Zombie from 1979. The acting is a little shaky but the camera work isn’t, and the cinematography and makeup is brilliant. The zombie-fighting-a-shark scene alone is still one of my favorites in a zombie film today. Granted, it’s a copy of Romero’s work, but it’s a delight and a must-see for zombie stalkers like myself. â˜…â˜…â˜…â˜…1/2

in 2002 my favorite movie and one of my favorite zombie films of all time is easily 28 Days Later. Danny Boyle brings us a beautiful, near-perfect film that a lot of people didn’t even consider a zombie film. It was sold as the UK’s reinvention and had a great sequel, I thought, and I welcome a third. The plot: An English lad wakes up in a scene that’s very similar to Night of the Comet (another cool zombie flick worth seeing) and everyone is gone. The shot of Cillian Murphy walking across the River Thames in a barren London is marvelous. This movie borrows some Romero scenes but who doesn’t? This was the first time we would see zombies go from limping and moaning to sprinting and screaming with gorilla strength. (Reminds me of my PCP days.) This is also a revenge movie, which is always welcome in my book. â˜…â˜…â˜…â˜…â˜…

Return of the Living Dead is a cute little trilogy, with Return from 1985 being the best installment. It’s like Sam Raimi’s Evil Dead 1 and 2 but even more outrageous–dare I say the first zombie spoof movie? There is still a lot of gore, even though it’s a comedy. This might also be the first time I saw a zombie say, “more brains.” The most memorable character is Tar-Man. I still love this movie 25 years later. â˜…â˜…â˜…â˜…

ZOMBIE SHINFO (Shitty Unsolicited Information)
Do you know how Rob Zombie got the name for White Zombie? Yes, of course, the movie White Zombie from 1932. This is the first zombie movie ever made and it stars Bela Lugosi. Did you know Bela Lugosi’s last film appearance was in a sci-fi zombie movie? (Plan 9 From Outer Space, from 1959. Suck It Dracula.)

The Evil Dead 2 and Army of Darkness are not only two of my favorite zombie films, but two of my favorite films in any genre. Sam Raimi was creating horror gold long before he started filming Spiderman movies. Demonic forces tormenting the incomparable Bruce Campbell as a guy named Ash in a cabin in the woods. Ash loses his girlfriend, severs his own hand and replaces it with a boom stick (shotgun), kills zombies, fights evil forces, and even time travels to destroy the Necronomican book of the dead. These are important to the genre. â˜…â˜…â˜…â˜…1/2

Shaun of the Dead is a great zombie movie. It feels like a spoof of 28 Days Later because it’s an English film, but it really stands on its own and has some great gore in it as well as gut-busting laughs. The acting is great. It’s shot very well and references other zombie classics without being too obvious. Pretending to be a zombie to trick other zombies? Genius. This is a definite Top 10 film in my opinion. â˜…â˜…â˜…â˜…1/2

Braindead, a.k.a. Dead Alive from 1992, is Peter Jackson’s goriest film by far and in the Top 10 goriest films I’ve ever seen. It has some creepy moments, but it’s funnier than it is scary. Walking through zombies with a lawn mower is a piece of cinema gold that even made it’s way to a video game, Dead Rising. I can’t say enough great things about this fucking movie. â˜…â˜…â˜…â˜…1/2

Pet Sematary came out in 1989. A lot of people forget this is a zombie movie, and a fucking great one at that. (My son got smashed by a tractor trailer. Let’s bring him back to life by burying him in a pet cemetery that brings back dead animals.) This memorable child zombie movie even has creepy-ass Herman (Fred Gwynne) from The Munsters in it. I would have kicked that little kid zombie across the room though real zombie talk. â˜…â˜…â˜…â˜…1/2

Zack Snyder’s Dawn of the Dead remake is one of my favorite zombie movies ever. I like it better than the original (shoot me), actually. It’s shot beautifully and the gore is phenomenal. My pregnant girlfriend is a zombie, but maybe the baby will be okay? Maybe everyone will survive. I just love this movie to death and back again. â˜…â˜…â˜…â˜…â˜…

I couldn’t end this without saying how much I loved Zombieland. I know a lot of people hated this movie and I just don’t see how. I thought the genre couldn’t go any further, but they did, and did it well. The Bill Murray cameo is as important to zombie films as the zombie vs. shark scene from Zombie. â˜…â˜…â˜…â˜…1/2

The Crow with Brandon Lee. Yes it’s a zombie film and it’s on my list. Eric Draven comes back from the dead, plays guitar on rooftops, paints his face like a Norwegian black-metal singer, and avenges his girlfriend’s rape/murder. Revenge flick, fuck yes. â˜…â˜…â˜…â˜…â˜…

There are so many damn zombie movies, so I only listed 10 or so of my favorites. Here’s one more, though: the most underrated zombie of all time features none other than Jason Voorhees. He wasn’t actually killed until part four, when young Tommy butchered his ass. Part five had a fake Jason doing all the killing. In part six, Jason Lives, he is dug up and brought back to life. So part six thru 10 and 11–if you count Freddy vs Jason (which I liked the best)–he is in fact a zombie.