NEEDLE EXCHANGE 050: An Exclusive Mix By … The Glass 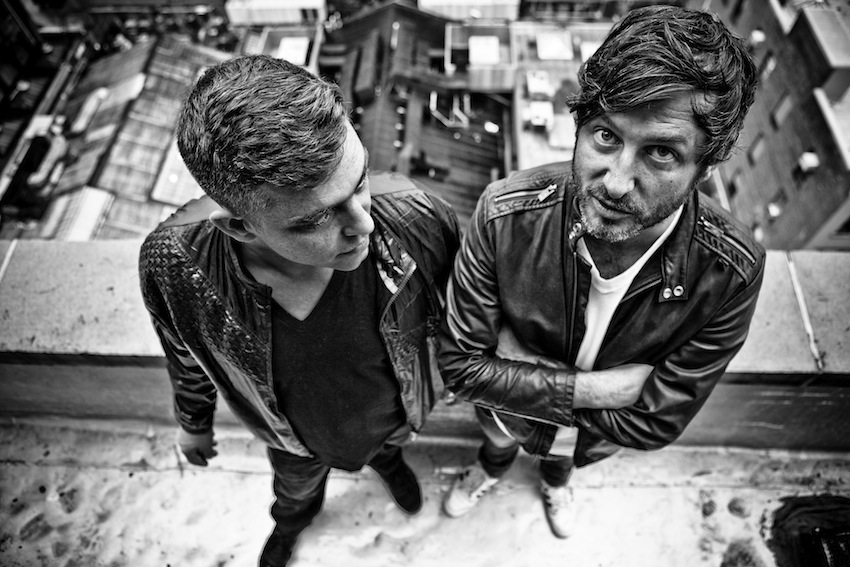 The Glass and self-titled go way back. So far back, in fact, that they played our very first party in 2005: an unofficial CMJ showcase featuring Jason Forrest, Kinski, the Spinto Band, Head of Femur, Cheeseburger and Kudu. Our staff was still running DIW magazine back then, and while five years have passed in the interim, frontman Dominique Keegan and multi-instrumentalist Glen ‘DJ Wool’ Brady just got around to delivering their first proper album, At Swim Two Birds.

In honor of taking one’s time to deliver a perfectly balanced blend of techno, disco, house and rock, we’ve asked the New York City-based duo to share a mixtape of their clearest influences…

Fine Young Cannibals, â€œI’m Not The Man I Used To Beâ€
This one came out when I was 16, but I’ve rediscovered it several times over the years. I used to love listening to it while cycling the Williamsburg bridge in the early ’00s. It just always lifted my spirits. Last week I was in Duane Reade in the East Village and this was on the radio. There was a big beautiful woman who looked straight out of a gospel choir walking down the aisles, singing along at the top of her lungs. Wish I could’ve recorded her in a studio. I love the classic breakbeat in the background. That style of combining cutting edge sampling and looping with gorgeous pop elements has always stayed with me and in a sense I’ve always tried to do this with the Glass. I love the disco-esque guitar licks and the subtlety of the basslines, too.  Perfect Pop.–Glen Brady

Lloyd Cole & the Commotions, â€œCharlotte Streetâ€
When Lloyd Cole hit the charts in the mid-’80s, he changed the way we all felt about two fashion items: tweed jackets and turtleneck sweaters. Two years after Rattlesnakes–which â€œCharlotte Street’ is taken from–almost every middle class teenager in Dublin was wearing tweed. Comical. I also love that this song is about Charlotte Street in the West Village, where Lloyd has been living on and off for decades.–Dominique Keegan

My Bloody Valentine, â€œGlider (Andrew Weatherall Mix)”
I was in two minds about including this track.  Don’t get me wrong; I absolutely love it and I can still taste white doves and disco biscuits from around 1990 every time I hear it, but I thought Dominique would cover the Irish contingent in this mixture. Sorry Domo! I’m also a little bitter about the Valentine resurgence in the years since Lost in Translation, but I’m in therapy and dealing with my anger, so fuck it…nah just kidding!–GB

The Alkaholiks, â€œDaaam!â€
This was made in ’94, but I couldn’t get it in Ireland until well into 1995. It’s officially one of the first two tracks I mixed. The track that mixed well with it was DJ Krush’s seminal “Kemuri,” which ushered in trip hop and helped pushed the Mo’ Wax label. “Daaam!” was on the album Coast 2 Coast and was my real introduction to tight, legit West Coast hip hop. It was more creative, interesting, and related to Tribe and the JB’s, than anything Snoop ever did. No offense Dogg!–GB

Phil Lynott, â€œOld Townâ€
Thin Lizzy’s Phil Lynott made a few solo records at the end of his life, and this is one of them–a true ode to London, where he lived from around 1980 to his passing in 1986. Although most Irish people have a love/hate relationship with London, this song captures a positive and romantic side that is rather sweet. The piano solo is so over the top, especially combined with Phil’s “ola!” chant.–DK

Todd Rundgren, â€œA Dream Goes On Foreverâ€
Famed as a producer of everything from the Ramones to Mercury Rev, Todd Rundgren’s solo material often goes unnoticed. â€œA Dream Goes On Foreverâ€ is from his 1974 double album Todd. In some respects, I consider him the godfather of yacht rock, but he was also known as Bebe Buell’s beau (well, one of) and considered to be Liv Tyler’s dad until DNA testing proved Steve Tyler to be the paternal colonel.–DK

David Bowie, â€œDrive-In Saturdayâ€
I have been a Bowie fan since I was 7 years of age, and this has always been in my Top 5. I just love the way the whole soda pop/’50s-style song is executed. People from Europe always glamorized retro America, and the drive-in movie is the pinnacle of that time. The song also contains the amazing line, “It’s a crash course for the ravers,” which has so much more meaning than David originally intended.–DK

Melba Moore, â€œMagic Touchâ€
I have to thank a DJ in Dublin for introducing me to this one. Thanks Dandelion! She schooled everyone on Northern soul and as far as I know, is still killing dancefloors in my native Dublin. This track is a superb example of the genre and a truly remarkable production. It’s, on and off, my favorite track of all time.–GB

Clubfeet, â€œEdge of Extremesâ€
This is the only contemporary song I have chosen to put in this mix, and I am biased, as Clubfeet are on our Plant Music label. That having being said the simplicity of this song and the warmth in their harmonies make this one of my fave tunes from the past few years.–DK

La Funk Mob, â€œLa Doctoresseâ€
Another track from the Mo’ Wax stable of mid-’90s, sample-centric dopeness. This is a treasured 12” of mine. I like skateboarding mini-ramps/half-pipes, and sometimes I go to one at a club called Yaam! in Berlin. No one is skating early in the morning, so I don’t have a bunch of 15-year-old kids embarrassing me with their skills. That’s when I put this song on and pump around. Extra credit is given for its usefulness in my late-’90s sets in the now-defunct nightclub The Kitchen in Dublin. Also look up who made this, and you might not be surprised where their career went afterwards.–GB

Velvet Underground, â€œCandy Says (Alternate Closet Mix)â€
Although the well-known version of this song is Lou Reed’s solo version, this earlier recording from 1968 or ’69 is heavenly. The sadness and beauty he manages to portray of New York’s most famous dame de nuit is heart-wrenching. The production and mix is so ahead of its time and so warm. Powerful stuff–jazzy even, the sound of his Gretsch Country Gentleman [guitar] is really lovely. Thanks Lou.–DK