NEEDLE EXCHANGE 077: An Exclusive Mix By … The Black Dog 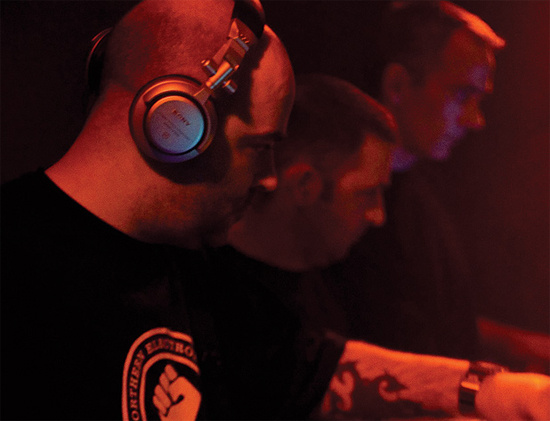 If you listen to the last three Black Dog LPs in order—the alternate ambient Eno universe of Music For Real Airports, the deeply moving drone tones of the trio’s extended Dadavistic Orchestra family, and the masterful minimal techno of last month’s Liber Dogma album— there isn’t a logical progression to their productions so much as a complete disregard for how it all sounds in the scheme of things. An amazing feat when you consider that the collective (co-founded by Ken Downie and the recently reunited guys from Plaid, with Dust Science‘s Martin and Richard Dust rounding out the current lineup since the early ’00s) has been around for more than two decades.

“At times, we’ve tested our supporters by moving subjects or changing our ‘sound’,” admits Downie. “But it’s something you must do as an artist. You can’t be a Dorian Gray in reverse; you can’t stand still forever or else you would stagnate and die.”

In the following exclusive, we share the fourth installment of the Black Dog’s Dark Wave mix series alongside a rare extended interview…

“We decided to go back to basics; fuck running with the pack”

You’ve released three very different records in the past year. How would you describe the thought process behind each one and how they tie into the overall Black Dog ethos?
Every project is a separate piece of art for us. Each has different emotions, reasoning and vision behind it. We like to investigate our subject and then convert everything through the use of machines—something we have always done and strive to be better at…We have a phrase here which sums it up: “chicken and basket band.” Not that there is anything wrong with playing music while people enjoy their food. It’s a decent and honorable living. But it’s not something we would be comfortable with. The safe, the familiar, and knowing what will happen before you do something, is not for us.

Is the third, and final, part of your Dokument series on the way soon? If so, how would you describe how it sounds compared to the other two?
Dadavistic Orchestra play live in Switzerland in December, so we may be using that recording for Dokument .03. We are not short of material; having six people in the collective really helps with making things happen. We are yet to decide what will become Dokument .03. We have no idea how it will sound; it feels like it may be “louder,” but that’s all we can say at this point.

How did you end up working with the Psychick Warriors ov Gaia in the first place and how would you describe them to people who are not familiar?
We’re big fans of their work and already knew a couple of them through Thee Temple Ov Psychick Youth. How would we describe them? Like the sound of an idea dropping through a membrane directly into your mind!

What drew you to the Dada art movement and what elements of its philosophy really stuck with you?
Cabaret Voltaire first made us aware of Dada in 1978. The idea of art, politics and fun is pretty hard to resist; that’s pretty much our life in three words. That’s what’s stuck with us and will do until we stop. In addition to being anti-war, the original Dada movement was also anti-bourgeois and anarchist in nature. Which makes it right up our street. Last month, before Mr. Gaddafi was captured and shot, the UK was involved in three wars. There is no permissible way the ordinary citizen can protest, or make their views known about this. Except through a complete rejection. Though it may have been created in 1916 with Verdun and the Somme in mind, Dada still twangs strings and strikes a chord today.

Did you start working on the Liber 12-inches that led up to your new album because you missed not only making but hearing really solid minimal dance music?
We’d been testing the tracks for about a year before in live sets. We wanted to try something different from what we’d been hearing—DJ after DJ rinsing the crowd out with build after build and then a drop. It’s really boring and safe. So we decided to go back to basics; fuck the running with the pack.

While you’ve certainly recorded club-ready tracks before, your recent material is about as minimal as your work gets. Did that come naturally, or did you find it hard to keep some of the songs so stripped down?
The hardest part was the stripping back and having a confidence to say that’s it. It had to be right for us. It sounds like an easy thing to do, but it really wasn’t.

The new album unfolds like a seamless mix. Was that the idea from the beginning—delivering an experience that’s on par with seeing your live show?
Our last few albums have been paced like that. With no ‘A’ or ‘B’ side anymore, there is a different dynamic to the thing. When people had to flip vinyl albums over, it was permissable to peak in the middle, leaving the listener physically wanting to get up and change the disc over to hear the rest of the tunes. Now that that no longer happens, the work has to flow differently.

What’s one recent electronic/dance set you saw that captured the very essence of what you’ve always loved about this kind of music?
Richard H Kirk last week at Park Hill. He always surprises with his selections. Alva Noto for the cold distance. There’s lot of thing we love about electronic music; finding old tracks or listening to Blawan or Sigha, there’s not just one thing we could name.

What were some artists that you saw early on that influenced or at least inspired the Black Dog in some way?
Cabs, Sex Pistols, X-Ray Specs, Kraftwerk, Throbbing Gristle, Spoon Fazer, Lee Perry and the KLF, but that list is far too basic. Lots of things influence us, whether that’s art, poetry, film, magazines or, of course, friends. We still get inspired today by other people’s creativity.

You mentioned liking Sunn O))) in a recent interview. What do you dig about them and what are some other artists people would be surprised you like?
Well, we like the music a lot and the performance. The performance is something we don’t really do, because we view performance as a rockism. We are not performers. And we are not a rock ‘n’ roll band, but we like the way it verges on the absolutely ridiculous—very Dada. We don’t mean that as an insult, but wonder how it got to the stage of dressing up with dead crows on your arms while covered in flour. As we mentioned we like a lot of things.

You were often lumped in with the IDM scene in the ’90s. What do you think of ‘intelligent dance music’ as a concept in retrospect?
We make techno; that’s it really. Often people credit us with inventing it (IDM) but we wouldn’t have used such a stupid and insulting title, which shows no respect to the history and spirituality of tribal dance music. As a name and concept it may have been better if it had stayed meta, but hats off to Warp Records for recognizing the need to differentiate it from mainstream warehouse/rave techno.

We got lumped in because that’s what journalists do. They see a whole bunch of bands starting up at the same time, and think it’s “a scene.” We experienced the same thing back in the days of punk. People were labelled “punk” whether they were punks or not. It sometimes helps people to put labels on things; we understand that. To be able to pin them down, and know all about them but that leaves no room for mystery, or anything out of the ordinary. In retrospect, there is nothing wrong, at all, with noodly introspective bedroom music, which you can chill out, or drive to but we’re glad it’s something we don’t have to do every day.

Going back to Music For Real Airports, if you could only listen to one record while on a long layover in an airport, what would it be and why?
Vexations by Erik Satie (meant to be played back to back at least 78 times, or Piano Oracles by Sakis Papadimitriou (which does the same thing).

I usually hate asking people what their actual artist name means, but in the case of the Black Dog, I feel like there was a lot of thought put into what the group represents. Am I reaching here? Were there some specific guiding principles to the project in the beginning? And if so, how have they changed with time?
No, you’re not reaching. A lot of thought went into the choosing of the name. But to explain it in black and white, in a couple of sentences wouldn’t do it justice. We could tell you one thing, but that wouldn’t be the whole of it. Just a facet. One thing that hasn’t changed since day one is that there is no songwriter or leader. All band members are equally credited for every tune, and everybody has their say in the direction the band takes. We’re proud we’re still a collective and happy to say that nobody has ever been ripped off—another guiding principle that we’ve always adhered to. It was fun having multiple band names back in the early days. But now we are free to move in any direction we fancy; there’s no more need for them.

Many American listeners don’t know the first thing about Sheffield. How would you describe its music scene today, and how have your surroundings informed the Black Dog sound over the years?
I’d (Ken) always been aware of Sheffield bands, but it wasn’t until Rob invited me up to the Warp offices that I fell in love with the place. I was impressed because people stop you in the street and have time for conversations that don’t center around “give me money for beer.” Five minutes outside of the city center, there are rolling hills which rival anything Devon or Cornwall can offer. I think that’s helped to ground the city. Though it has a heavily industrial past, nature is never very far away.

What can we expect from you next?
The next thing we will be doing is something that we enjoy. If our heart’s not in it, there isn’t any point and we won’t do it.